Cimex lectularius L., the common bed bug, is a hematophagous human ectoparasite. The veterinary drugs, spinosad and fluralaner, were studied for their ability to incapacitate C. lectularius when administered in a blood meal using an artificial feeding system under laboratory conditions. Tested drug doses were based on the reported peak blood levels in animals given the drugs. Spinosad at doses 1,000 ng/mL or higher resulted in 75% or greater bed bug incapacitation (defined as death or immobility). Fluralaner at doses 500 ng/mL or higher had 100% bed bug incapacitation. Both drugs were significantly more effective than controls at these doses (P < 0.001).

Cimex lectularius L., known as the common bed bug, is an obligate hematophagous insect that primarily feeds on humans [1]. The number of bed bug infestations has risen in many parts of the world in the past few decades, which is in part due to growing resistance to the pesticides used in their control [1]. Elimination of bed bug infestations relies on an integrated pest management (IPM) approach that includes decreasing insect harborage and the use of pesticides or heat treatments [1].

Bed bugs are likely one of the most common human ectoparasites encountered by health care providers in industrialized countries [2-9]. No orally administered pharmaceutical agents for humans have a US Food and Drug Administration-approved indication for bed bugs. The antiparasitic drugs, ivermectin and moxidectin, both cause toxicity to bed bugs [10-15]. Ivermectin could be considered an adjective therapy along with IPM to eliminate a bed bug infestation. Moxidectin has more favorable pharmacokinetics than ivermectin, but the drug does not appear to cause as much long-lasting harm to bed bugs as ivermectin [11,16].

The veterinary drugs, spinosad and fluralaner, are currently used to control ectoparasites in animals but have not been studied for activity against bed bugs when administered in a blood meal. Spinosad, which consists of spinosyn A and D, is used to kill fleas in dogs and cats by acting at the nicotinic acetylcholine receptors in the insect nervous system [17]. Ingestion of 30 mg/kg of spinosad by dogs resulted in a peak plasma concentration of 1,550 ng/mL about 3 hours after ingestion, with a mean elimination half-life of 271 hours [18]. Spinosad has low mammalian toxicity, with an oral median lethal dose of 3,738 mg/kg for male rats and greater than 5,000 mg/kg for female rats and mice [17]. Topically applied spinosad has been shown to be toxic to bed bugs [19].

Fluralaner is part of the isoxazoline class of ectoparasiticides that inhibits the glutamate and gamma-aminobutyric acid ligand-gated chloride channels [20]. Fluralaner has high plasma protein binding and volume of distribution, which allows for therapeutic concentrations in animals for up to 12 weeks [20]. A single dose of afoxolaner, a drug in the same class as fluralaner, was 100% efficacious at clearing Sarcoptes scabiei (scabies) in a porcine model of human scabies [21]. In dogs, the peak plasma concentration after ingesting 25 mg/kg fluralaner varied by whether the animal was fasting (1,591 ng/mL) or fed (3,377 ng/mL) [22]. In animals, the time to peak concentration was approximately 1 day, with mean plasma concentrations greater than 500 ng/mL persisting for more than 21 days after drug dosing [22]. The aim of this study was to determine if blood meals containing fluralaner and spinosad would incapacitate C. lectularius.

Mixed inbreeding populations of the Fort Dix-Harlan strain and Ridge strain of C. lectularius L. were used in the experiments. The numbers of nymphs and adult bed bugs were not held constant, to mimic a natural population. Bed bugs were prepared and fed as described previously [11,12,15]. Bed bugs were kept in 2-mL microcentrifuge tubes containing a piece of paper on which the insects gathered (Figure 1). 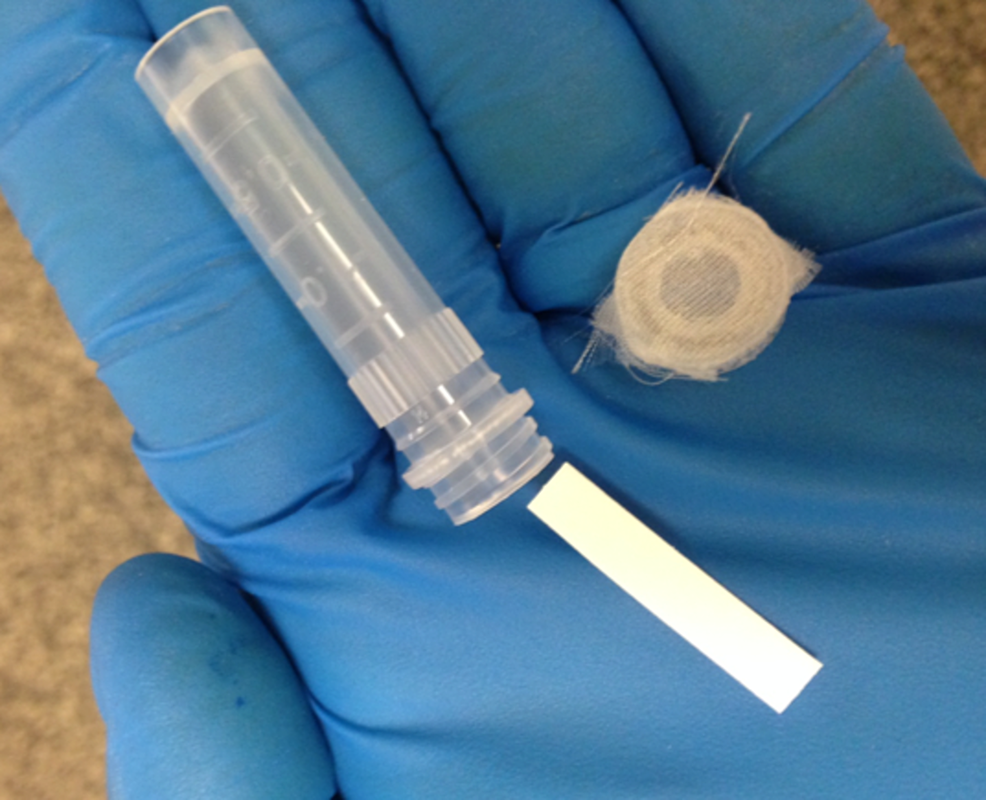 Figure 1: An example of a test tube that would contain the bed bugs

A 1/4-inch hole was drilled in the top of each centrifuge tube cap, and a piece of sheer fabric was glued to the surface, which was then covered with parafilm (Figure 2). Inverting this tube into warm blood allowed the bed bugs to feed (Figure 2). 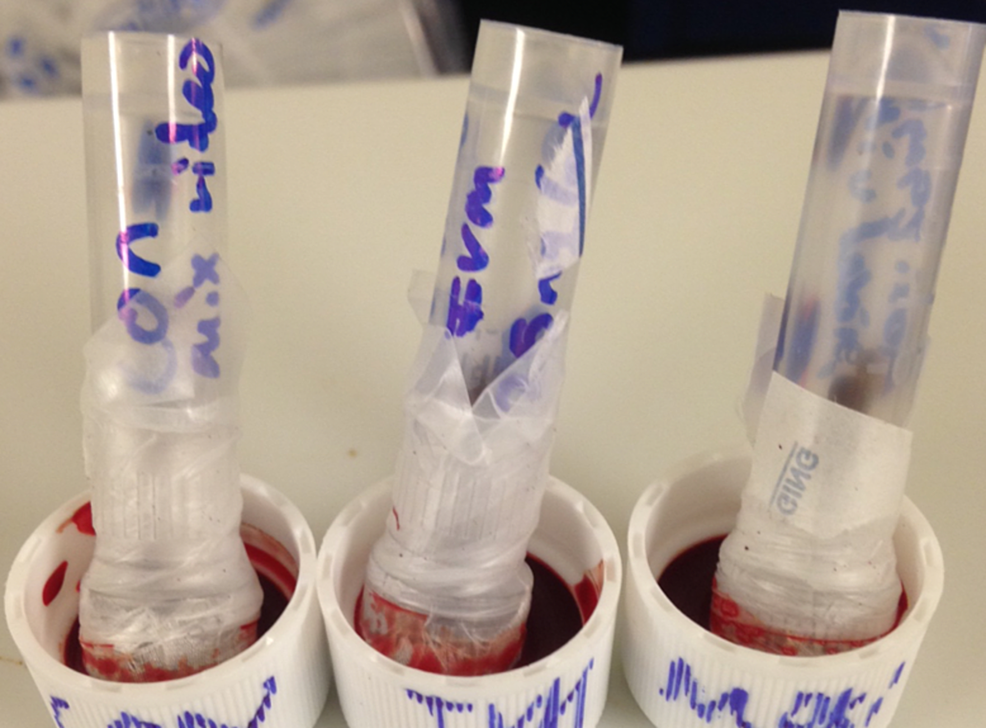 Figure 2: An example of bed bugs feeding on warmed blood

Unfed bed bugs were removed and discarded. Fed C. lectularius were kept and observed, and all bed bugs fed only once (Figure 3).

DMSO has previously been reported to have bed bug toxicity [12]. To minimize DMSO toxicity, experiments 2 and 3 were performed with 2 microliters of the stock drugs diluted with Hanks’s Buffered Salt Solution (HBBS) to a concentration such that when 10 mcL of the diluted drug was added to 1.990 mL of defibrinated sheep’s blood the final drug concentration was achieved. For controls, 10 microliters of DMSO was diluted 1:5,000 in HBSS and added to 1.990 mL of defibrinated sheep’s blood. Bed bug incapacitation rates were recorded on days four and 14 for experiment 2 and on days two and 14 for experiment 3. Bed bugs were recorded as being either an adult or nymph throughout experiment 2. The life stages for each insect used in experiment 3 were not recorded. All experiments had two control groups, which were combined for the analysis.

The number and life stage for all fed C. lectularius are listed in Table 1. All bed bugs, with the exception of the controls and fluralaner 10 ng/mL, were incapacitated within hours of the feeding (Table 1).

*All incapacitated within hours of feeding

Table 4 shows the number of fed C. lectularius and whether they were adults or nymphs.

*indicates that there was one more insect categorized as an adult, rather than a nymph, 4 days post-feeding

The incapacitation rates when experiments 2 and 3 were combined are shown in Figure 4 for spinosad and Figure 5 for fluralaner. 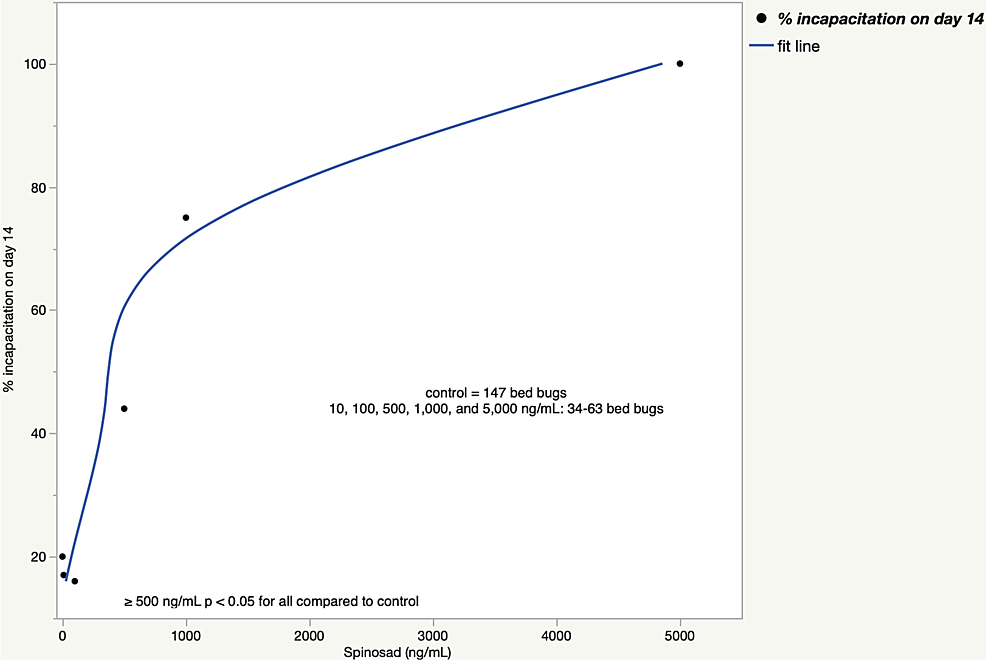 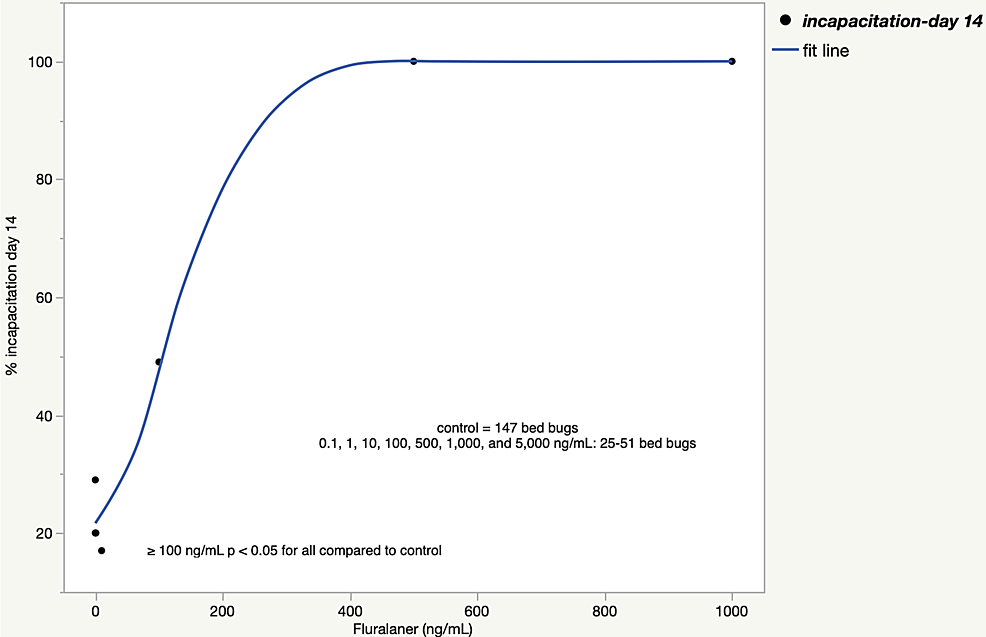 Both spinosad and fluralaner showed a dose-response effect on C. lectularius incapacitation. At ≥500 ng/mL, fluralaner incapacitated all fed bed bugs. The results are preliminary and additional studies are needed to further explore the toxic effects these drugs have on bed bugs. Future studies could include administering the drugs to animals, measuring the plasma concentrations of the drugs in the animals, and simultaneously observing the C. lectularius morbidity and mortality over time for each life stage in the fed insects.

Fluralaner has a much longer plasma half-life than spinosad [17-18,20-22]. A single dose of fluralaner in dogs resulted in plasma concentrations greater than 500 ng/mL for more than 21 days [22]. If the pharmacokinetics of fluralaner in dogs are similar in humans, this could mean that a person could take a single oral dose of fluralaner and would have over two weeks of plasma concentrations that achieved 100% bed bug incapacitation in our experiments which could be sufficient time for all bed bugs in a population to take a toxic blood meal [22].

Fluralaner also rapidly kills Phlebotomus sand flies and Anopheles, Culex, and Aedes mosquitoes [23-25]. Preclinical modeling estimates that one oral 410 mg dose of fluralaner in humans would provide 50 to 90 days of insecticidal effect against Phlebotomus sand flies and mosquitoes [25]. However, there have been no human clinical trials of oral fluralaner or spinosad reported in clinicaltrials.gov or published in PUBMED.gov. There is only one case report of an intentional overdose of spinosad [26]. If fluralaner is ever shown to be safe, in humans it could then be further evaluated for its ability to harm C. lectularius.

The number and life stages for the C. lectularius were not held constant at each of the tested doses. Additionally, the time from the laboratory feeding until the incapacitation rates were calculated was not constant. The experiments were not set up to examine fecundity, the ability of the insects to refeed, molt, or ambulate. Experiment 1, and to a lesser extent, experiments 2 and 3, had high mortality in the control group which is hypothesized to be secondary to DMSO. Differences between pyrethroid-sensitive and resistant bed bugs, as well as recently field-captured versus laboratory-raised insects, were not assessed.

The experimental design did not account for any drug metabolism or intracellular accumulation, which would otherwise occur in vivo, and so incapacitation rates for bed bugs fed on humans or animals, given spinosad or fluralaner, might be different than what was found in our laboratory feedings. Additionally, the doses that were used in the laboratory feedings were based on the plasma levels of the drugs recorded in animals given the drugs at therapeutic doses. However, hematophagous insects take whole blood meals and not plasma meals, and so the actual drug concentration obtained from a feeding insect would likely be different than what would be reported as the plasma concentration.

I thank Dr. Gale Ridge at the Connecticut Agricultural Experimental Station for providing the bed bugs.

© Copyright 2020
Sheele. This is an open access article distributed under the terms of the Creative Commons Attribution License CC-BY 4.0., which permits unrestricted use, distribution, and reproduction in any medium, provided the original author and source are credited.

Figure 1: An example of a test tube that would contain the bed bugs

Figure 2: An example of bed bugs feeding on warmed blood

*All incapacitated within hours of feeding

*indicates that there was one more insect categorized as an adult, rather than a nymph, 4 days post-feeding

Diagnostic Accuracy of High-Resolution Computed Tomography of Chest in Diagn ...