A web-based survey was distributed to 22 critical care physicians working in our hospital and responses were collected over a two-week period.

Most critical care physicians believe that handshake stewardship rounds improve the quality of patient care (85.7%) and few believe that handshake stewardship rounds are an ineffective use of their time (14.3%). The majority of critical care physicians believe formal, scheduled rounds with face-to-face verbal interaction are very useful compared to providing written suggestions in the absence of face-to-face interaction (71.4% vs 0%).

Several barriers may impede the success of antimicrobial stewardship interventions in intensive care units, such as diagnostic uncertainty and fear of not adequately treating potential pathogens [14-16]. Prospective audit and feedback and pre-authorization have been recognized as core strategies of an antimicrobial stewardship program; however, the latter may have unintended consequences as a restrictive strategy including delays in time to first antibiotic dose and negative systemic effects on inter-professional collaboration [1,17]. Alternatively, prospective audit and feedback strategies may be more suitable in critical care environments if they increase capacity and engagement with prescribers [7,17]. Handshake stewardship has emerged as an extended derivative of prospective audit and feedback that places emphasis on three main components: lack of restriction and preauthorization, pharmacist-physician review of all antimicrobials and a rounding-based, in-person approach to feedback carried out by a pharmacist-physician team [18-19].

A web-based cross-sectional survey was designed and distributed to all critical care physicians working in Saskatoon, Saskatchewan, Canada, six months following the implementation of handshake stewardship rounds in our center.

The generation of items for the survey tool was developed in collaboration with experts in infectious diseases, critical care and antimicrobial stewardship. The questions were designed to assess the attitudes and perceptions of antimicrobial stewardship. Survey items assessed attitudes, perceptions and experiences towards handshake stewardship rounds using a five-point Likert-type scale with responses grouped as strongly agree/agree, neutral, and disagree/strongly disagree.

The introductory email and link to the online survey were sent in May 2017 using SurveyMonkey (SurveyMonkey Inc.®; Palo Alto, CA, USA) and were distributed to all identified critical care physicians, followed by two reminder emails sent every three days. The introductory email included a description of the purpose of the survey and the value of providing anonymous feedback. Survey responses were collected over a period of two weeks. The research proposal and survey tool were approved by the University of Saskatchewan Research Ethics Board. 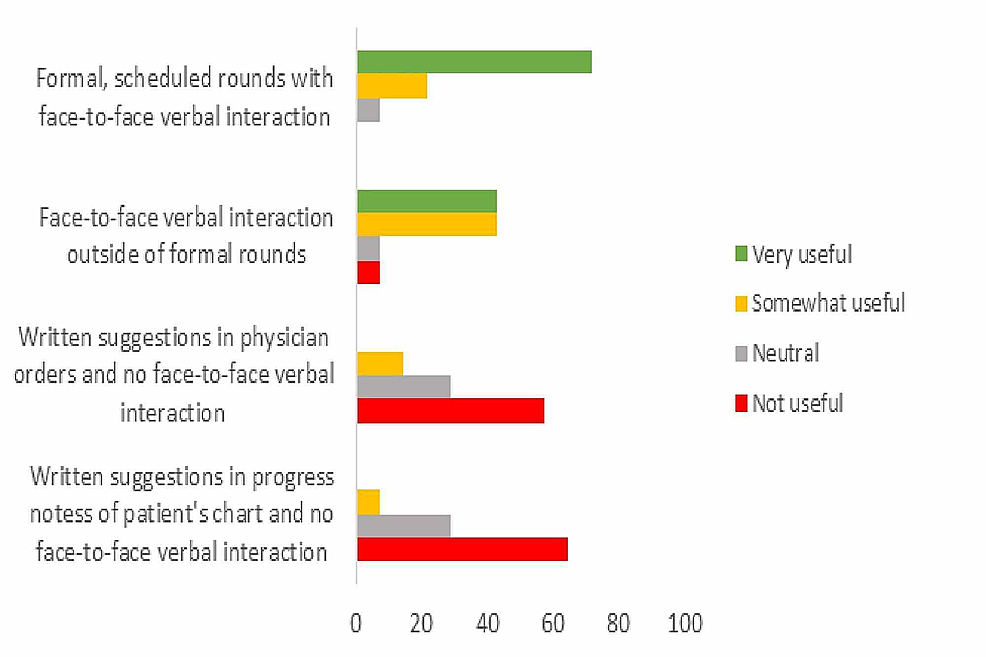 © Copyright 2019
Evans et al. This is an open access article distributed under the terms of the Creative Commons Attribution License CC-BY 3.0., which permits unrestricted use, distribution, and reproduction in any medium, provided the original author and source are credited.