In stereotactic radiotherapy (SRT), treatment with a single high dose is usually feasible as it spares the surrounding normal tissues, especially for intracranial lesions. However, single-fraction treatment may not be ideal in terms of efficacy. Single-dose treatment is particularly inefficient for tumors with hypoxia. Generally, tumors with a size of over 1 cm in diameter are considered to contain hypoxic cells, but the radioresistance of hypoxic cells can be partly overcome by fractionation owing to the reoxygenation of hypoxic tumor cells between fractions. In this article, we discuss the radiobiological characteristics of fractionated stereotactic irradiation (STI). And, based on our observations, we recommend that a dose of 54-60 Gy in six-eight fractions delivered two or three times a week for lung and other tumors larger than 2 cm in diameter is the ideal method of SRT.

Radiation therapy has a history of over 120 years. During the initial years of radiotherapy in the late 1890s, a single or a few fractions of radiation were used to treat superficial cancers [1]. A few years later, fractionated treatment came to be recognized as more efficient in terms of the antitumor effect and normal tissue toxicities. And after several decades, a dose that constituted 1.8 to 2 Gy of daily fractions administered five times a week, up to a total dose of 50-66 Gy, came to be established as the standard fractionation schedule in conventional radiotherapy. When the fractional dose is escalated, antitumor effects increase; but probabilities of complications in normal tissues, especially late-responding normal tissues, are considered to further increase with this escalation and outweigh the increase in antitumor effects. Hence, even in modern radiotherapy, 1.8- to 2-Gy daily fractions still remain the standard when moderate or large volumes of normal tissues are included in the radiation field using conventional radiation techniques.

However, advances in radiation techniques have brought about marked changes in fractionation schedules. With the technique of stereotactic irradiation (STI), radiation doses can be focused on the target while minimizing irradiation of the surrounding normal tissues. Therefore, the concept of conventional fractionation and the issues associated with it do not apply to STI. A relatively small lesion can be treated with a single fraction of 20-30 Gy with no apparent adverse effects with STI. Hence, single-fraction STI has often been employed especially in the treatment of intracranial lesions. Such a short-course treatment is beneficial for patients in palliative settings. However, the efficacy of single-fraction treatment for all tumors has not been well-established. Recent clinical evidence suggests that fractionated STI is more efficient than single-fraction stereotactic radiosurgery (SRS), especially for large tumors. In stereotactic body radiation therapy (SBRT) for lung tumors, four-fraction treatment has been empirically employed the most often; however, there is no radiobiological evidence to suggest that a particular fractionation schedule is the most ideal one. In this article, we aimed to discuss the optimal fractionation schedules in STI. 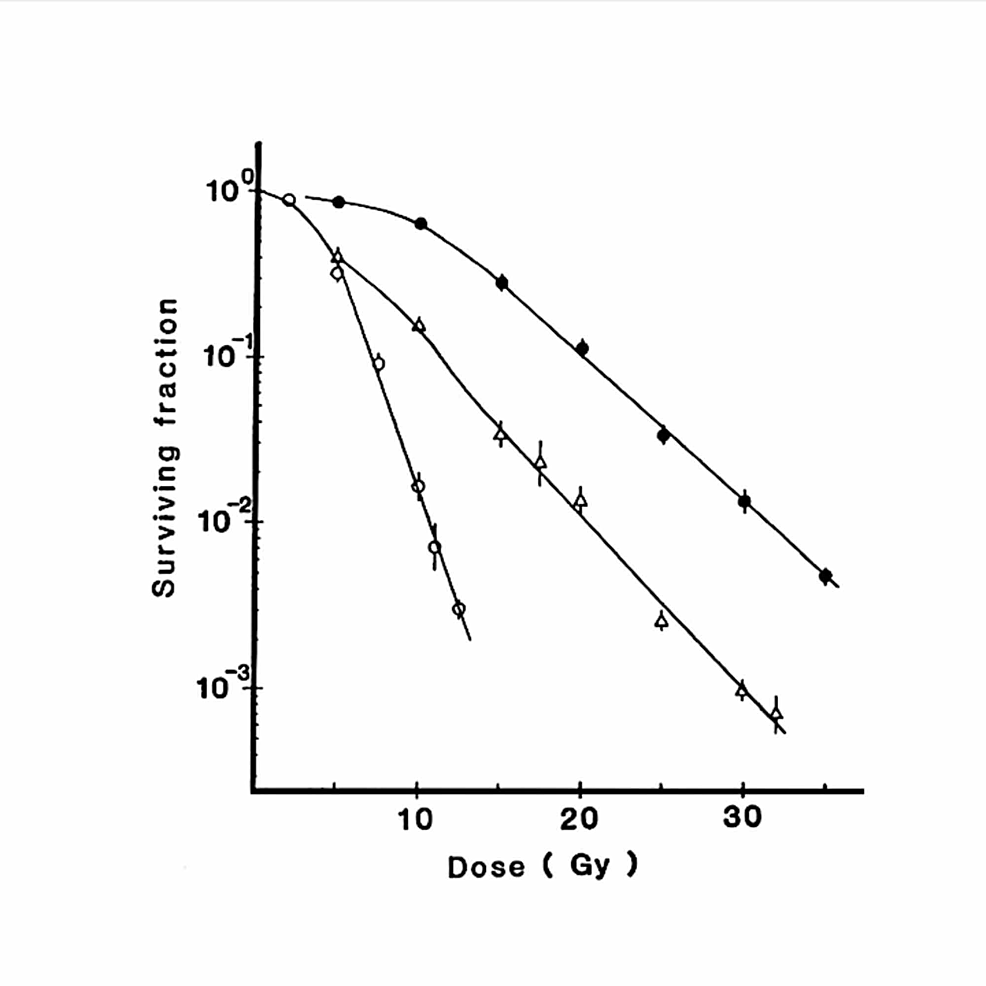 Thus, it is clear that tumor hypoxia hampers antitumor efficacy in STI. The question would naturally arise as to how large a tumor needs to be before it becomes hypoxic. It is considered that tumor hypoxia develops at a certain tumor size and increases with increasing tumor size, but not much information is available in the literature about the relationship between hypoxia and tumor size. Most data come from experimental studies with murine tumors. However, classical studies mostly used anesthesia or physical restraint of mice, which is known to artificially increase the hypoxic fraction at the time of irradiation [3]. It is difficult to estimate the true hypoxic fraction from such studies. The author and colleagues have investigated the hypoxic fractions of murine tumors by whole-body irradiation of tumor-bearing mice without physical restraint or anesthesia in a study [4].

Figure 2 shows dose-survival curves for SCCVII cells transplanted subcutaneously in C3H/He mice. By the paired survival curve assay, the hypoxic fraction was estimated to be 0.86% for 5-mm SCCVII tumors, 8.5% for 10-mm tumors, and 8.4% for 18-mm tumors. With an increase in the tumor size, the hypoxic fraction increased but reached a plateau at 10 mm. 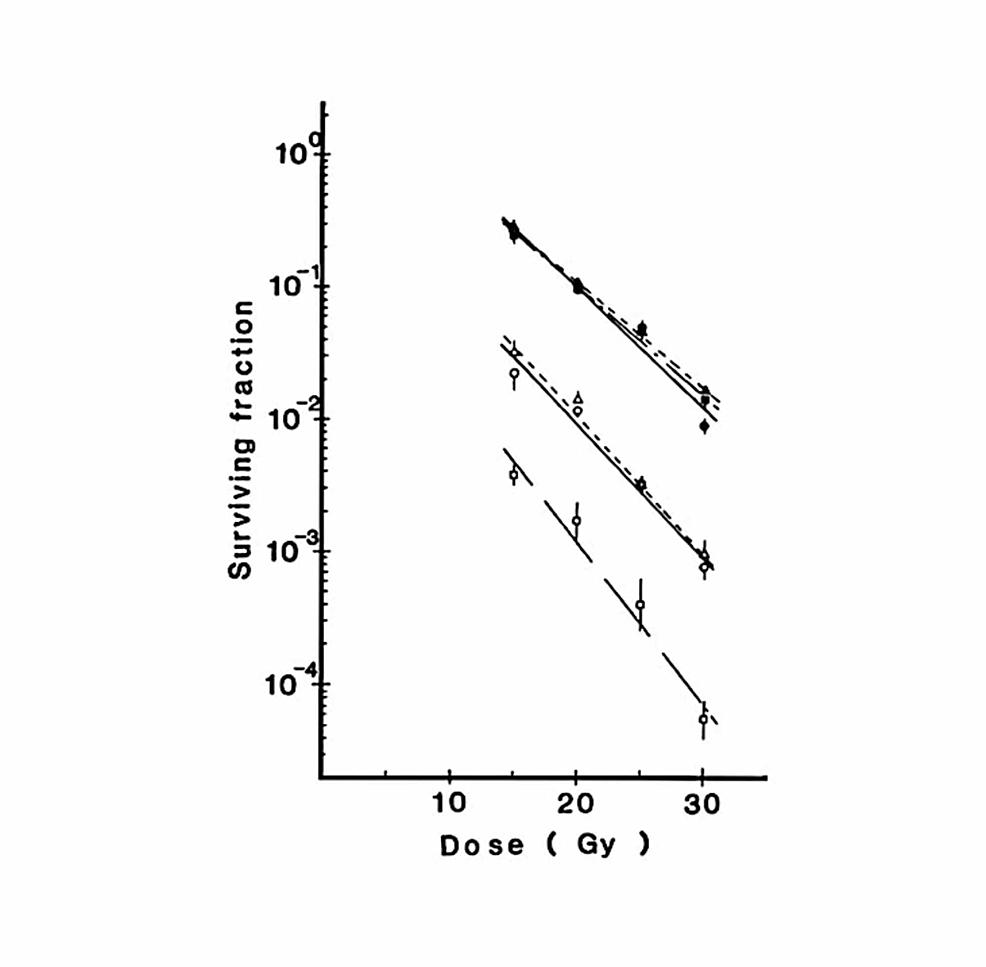 Hypoxia has also been proven to exist in human tumors [5-7], but the lower size limit of tumors with hypoxia has not yet been established. However, considering the existing data and data on murine tumors, it is reasonable to assume that tumors of >1 cm in diameter contain hypoxic cells. With enlargement, the presence of hypoxia would become more definite and the size of the hypoxic fraction would expand. Even if a 1-cm tumor contains hypoxic cells, it can be empirically controlled by single-fraction SRS. So, the authors think that tumors over 2 cm are good candidates for fractionated irradiation.

The main reason why fractionation is beneficial against large tumors is due to the reoxygenation of surviving hypoxic cells before the next fraction. In rodent tumors, reoxygenation is known to take place relatively quickly after a single high dose of irradiation. Figure 3 shows the changes in hypoxic fractions after a single high-dose (13 or 15 Gy) irradiation in three 1-cm subcutaneously transplanted murine tumors [8]. 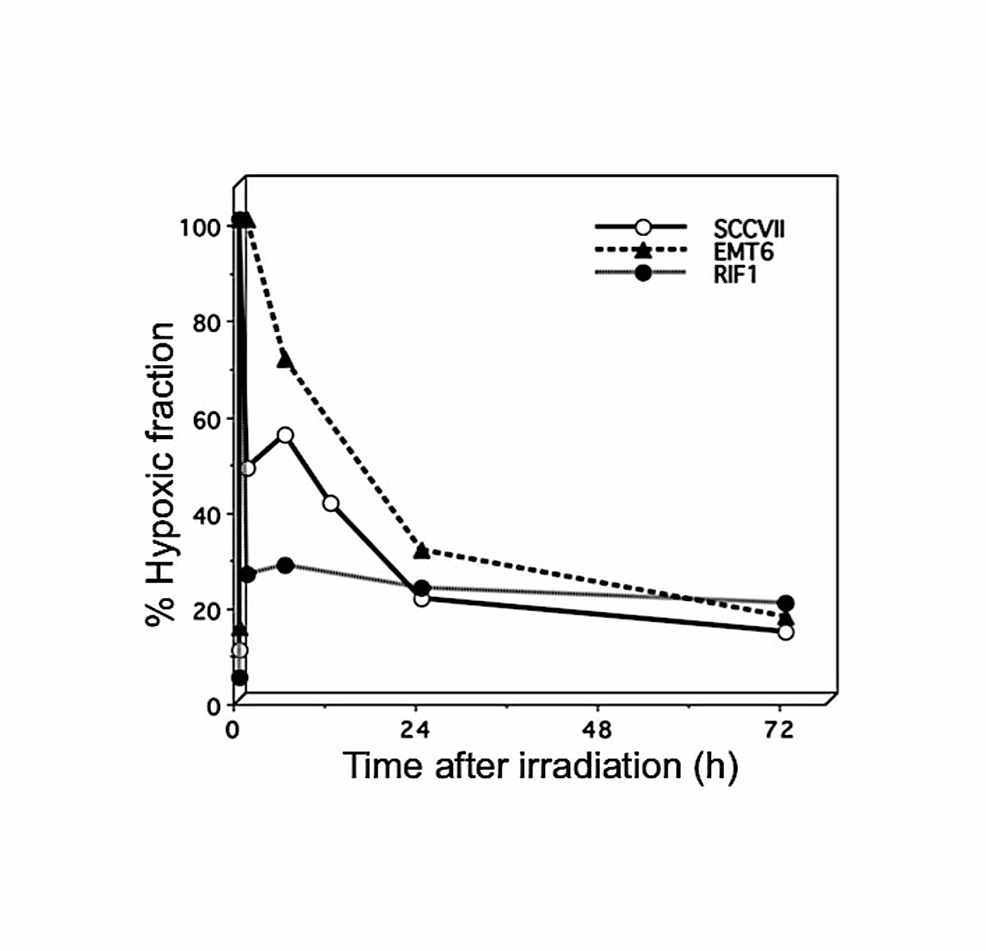 These data were obtained without using anesthesia or the physical restraint of mice, both of which markedly increase the hypoxic fraction of tumors [3]. In all three tumors, the hypoxic fractions at 24 hours after irradiation were significantly lower than those immediately after irradiation, indicating that reoxygenation was clearly present. In EMT6 tumors, reoxygenation was relatively slow, and it seemed to take longer than 24 hours for the hypoxic fraction to return to the pre-irradiation level. In the other tumors too, the hypoxic fractions tended to decrease further after 24 hours. Taking these results into consideration, we think that a 24-hour interval between fractions of stereotactic radiotherapy (SRT) may not be optimal for every tumor, and longer intervals may allow more reoxygenation to occur in some tumors. Therefore, we recommend using interfraction intervals of 48 or 72 hours in fractionated SRT for lung cancers [8].

Among the “four R's” (repair of DNA damage, redistribution of cells in the cell cycle, repopulation, and reoxygenation of hypoxic tumor areas) considered to play a role in fractionated radiotherapy, reoxygenation is the most important in STI, as stated above. With respect to the other three Rs, repair takes place between the fractions of STI, but it occurs in both tumors and normal tissues. So, the influence of repair is unclear. Repair is also known to take place to some extent during the few minutes between the respective portals of STI when multiple port irradiation methods are employed [10,11]. However, it has been suggested that a decrease of radiobiological effects due to this repair is counterbalanced by rapid reoxygenation that may occur within a few minutes after irradiation [12,13]. Therefore, the influence of this repair during daily treatment is also unclear, and may not be very important.

Redistribution of tumor cells in their cell cycle would also take place between fractions of STI. Since late-responding normal tissues are usually not dividing, the phenomenon of redistribution would be beneficial in fractionated SRT. Using the fluorescent ubiquitination-based cell cycle indicator (Fucci) system, we investigated the changes in the cell cycle distribution after irradiation in cultured cells [14]. Figure 4 shows the proportion of S/G2/M phase cells in HeLa/Fucci and HSG/Fucci cells after 0, 2, 5, or 8 Gy of irradiation. The peak of the G2 block was observed at 12 hours or later after 8-Gy irradiation, and the proportion of S/G2/M phase cells returned to the pre-irradiation levels at 18-24 hours [14]. 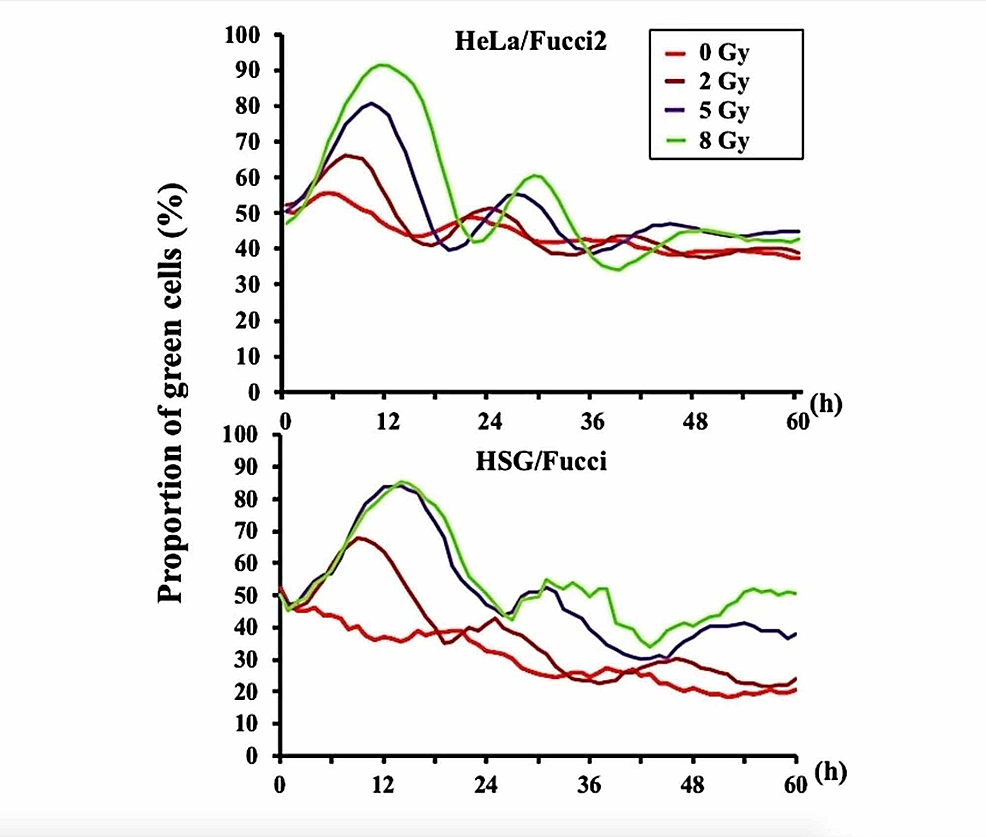 When the overall treatment time becomes long, the repopulation of tumor cells may hamper the effects of fractionated STI. In rapidly growing tumors, this phenomenon may start during the third week of radiation therapy, although it usually becomes problematic only when the overall treatment time is longer than three weeks [17]. Therefore, it may be advisable to complete STI within three weeks.

Based on the above findings, we propose some recommendations pertaining to hypofractionated SRT schedules. The Important points are as follows: 1) to more efficiently utilize the reoxygenation phenomenon, six- to eight-fraction schedules are better than three- or four-fraction schedules; 2) reoxygenation and redistribution may not be completed within 24 hours in some tumors, so interfraction intervals of 48-72 hours may be better than a 24-hour interval; and 3) recent studies have suggested that the linear-quadratic (LQ) model could overestimate the effects of high doses per fraction [11], and this should be taken into account when considering optimal doses using the LQ model. Improving the LQ model and creating a new alternative model were discussed in our previous paper [11], but at present, using the LQ model calculation presuming the overestimation of the effects of high fractional doses may be a reasonable solution [9].

We conclude that fractionated STI is highly beneficial and effective for the treatment of tumors, especially for tumors larger than 2 cm. An SRT schedule that constitutes fractions of six or more may be more efficient than one with fewer fractions to better utilize the phenomenon of reoxygenation of hypoxic tumor cells between fractions. To allow for sufficient reoxygenation and redistribution, interfraction intervals of longer than one day may be efficient. But this should be investigated further in future studies.

© Copyright 2020
Shibamoto et al. This is an open access article distributed under the terms of the Creative Commons Attribution License CC-BY 3.0., which permits unrestricted use, distribution, and reproduction in any medium, provided the original author and source are credited.

Postoperative Long-term Outcomes of Patient with Craniopharyngioma Based on ...