Materials and Methods: Enamel surfaces of 64 extracted human premolar teeth were randomly divided into four groups based on the antioxidant used. Further subgrouping was done in Groups II, III, and IV dividing each group into subgroup A and subgroup B of eight teeth each based on whether the bonding was performed immediately or after a delay of 14 days postbleaching respectively. Shear bond strength (SBS) of the specimens was measured using a Universal testing machine. The data were then tabulated and statistically analyzed using one-way ANOVA (analysis of variance) and Tukey’s post-hoc parametric tests. A p-value of <0.05 was considered statistically significant.

Results: The SBS measurements were compared among the four groups including the subgroups. The SBS was highest in the SA delayed bonding group and lowest in the bleached immediate bonding group.

Conclusion: A 10% SA solution has proven superior to 6% CB solution in the reversal of compromised bond strength following bleaching.

Tooth bleaching has become one of the most popular esthetic dental treatments and also done to enhance a person’s smile. It has been reported that the adhesion between the tooth surface and the bonding agent is hampered postbleaching [1-2]. The contributing factor for this reduced bond strength has been attributed to the oxygen free radicals accountable for the whitening effect; they adversely influence the penetration of the bonding agent into the tooth surface and inhibit the complete polymerization of the bonding agent [3].

Methods proposed to reverse the compromised bond strength of the resin material to bleached enamel are delay of 24 h to four weeks [4], removal of superficial layer of enamel [5], treatment of the bleached enamel with alcohol before the restoration [6], use of adhesives containing organic solvents [7], application of antioxidant agents [3, 8] before bonding the resin composite, and use of antioxidant incorporated bleaching agents [9].

The effect of cranberry (CB) as an antioxidant on bleached enamel has not been investigated so far. Hence, the present study is conducted with the aim to evaluate and compare the effects of 10% sodium ascorbate (SA) versus 6% CB solution on the reversal of compromised bond strength of bleached enamel.

It is an in vitro study conducted at MNR Dental College and Hospital, Sangareddy, India. Some 64 sound extracted human premolar teeth with intact enamel surfaces without pretreatment with chemicals and devoid of developmental defects were included in the study. Fractured teeth and teeth with dental caries, attrition, abrasion, erosion, and previously restored or endodontically treated teeth were excluded from the study. The teeth were cleaned to remove any residual tissue tags. The roots were amputated from the crowns at the cementoenamel junction using slow speed diamond disc under copious water spray. The teeth were then mounted in cold-cure acrylic resin using Teflon mold, with the buccal surface facing upwards. Some 16 teeth were sampled as Group I (n=16) which served as the positive control group and did not receive any bleaching treatment. Remaining 48 teeth were equally divided into three groups (Groups II, III, and IV) based on the type of antioxidant used after bleaching. The groups were further divided into subgroups A (immediate bonding) and B (delayed bonding after two weeks) based on the storage period before composite build-up. Each subgroup consisted of eight teeth (Figure 1).

Bleaching gel containing 40% hydrogen peroxide (Opalescence boost, Ultradent products, Inc, South Jordan UT) was placed on the enamel surface of sample for 20 min according to the manufacturer’s instructions (Figure 2). The bleaching gel was then completely rinsed off with water. 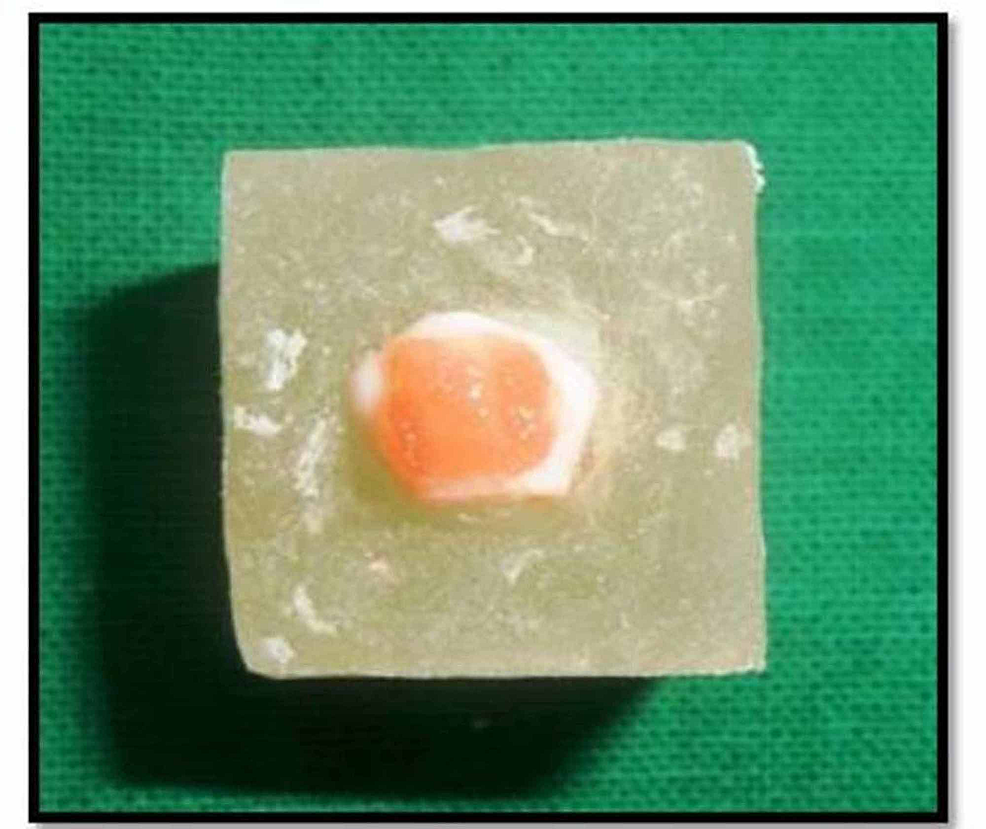 Two solutions were prepared for this study:

2) 6 g of CB extract (TracfreeTM, Zydusnutriva, Cadila healthcare Ltd., India) in the form of powder was collected from the tablets and dissolved in 100 mL of distilled water to make 6% CB extract solution.

The respective samples were immersed in 10% SA and 6% CB extract solution for 10 min (Figure 3A,B) following the bleaching process and then the specimens were rinsed with distilled water and dried with compressed air. 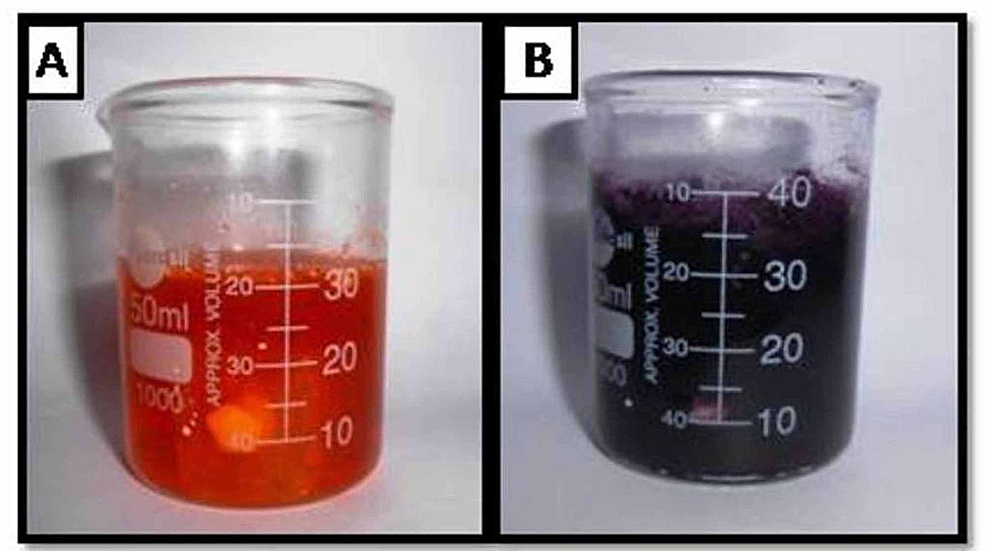 All of the specimens were etched with 37% phosphoric acid gel (D-tech Dental technologies, Pune, India) for 15 s and then rinsed with water for 20 s and air dried for 5 s. Adhesive (Prime &Bond®NT Nano-technology dental adhesive, Dentsply, USA) was then applied, gently air thinned, and light cured for 10 s.

A split-mold metal casing (3 mm in diameter and 5 mm in height) was used to maintain uniformity in composite build-up. The casing was placed on adhesive-applied enamel surfaces; composite (Filtek Z350, 3M ESPE, Dental Products, India) was then filled into the hole in layers and each layer was light cured according to the manufacturer’s instructions. After polymerization, mold was removed and specimens were placed in distilled water for 24 h.

The data were subjected to parametric tests -- one way ANOVA (analysis of variance) for multiple group comparison of SBS followed by Tukey’s post-hoc test for group wise comparison depending on the normality of data and p-value (<0.05) was considered statistically significant. 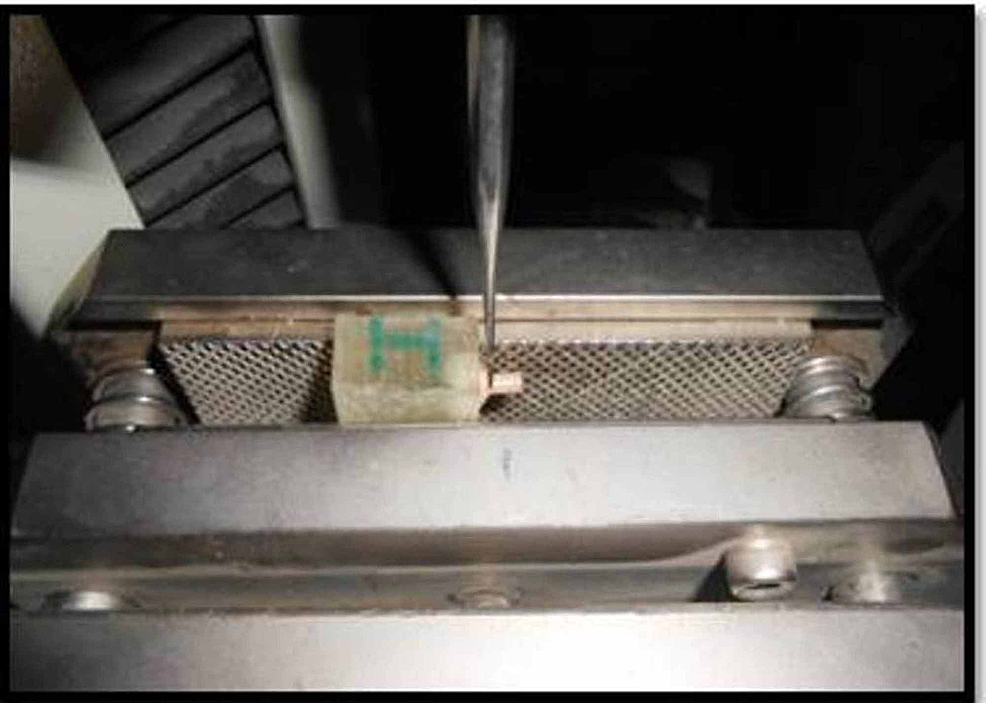 The SBS measurements were compared among the four groups including the subgroups and are shown in Figure 5. 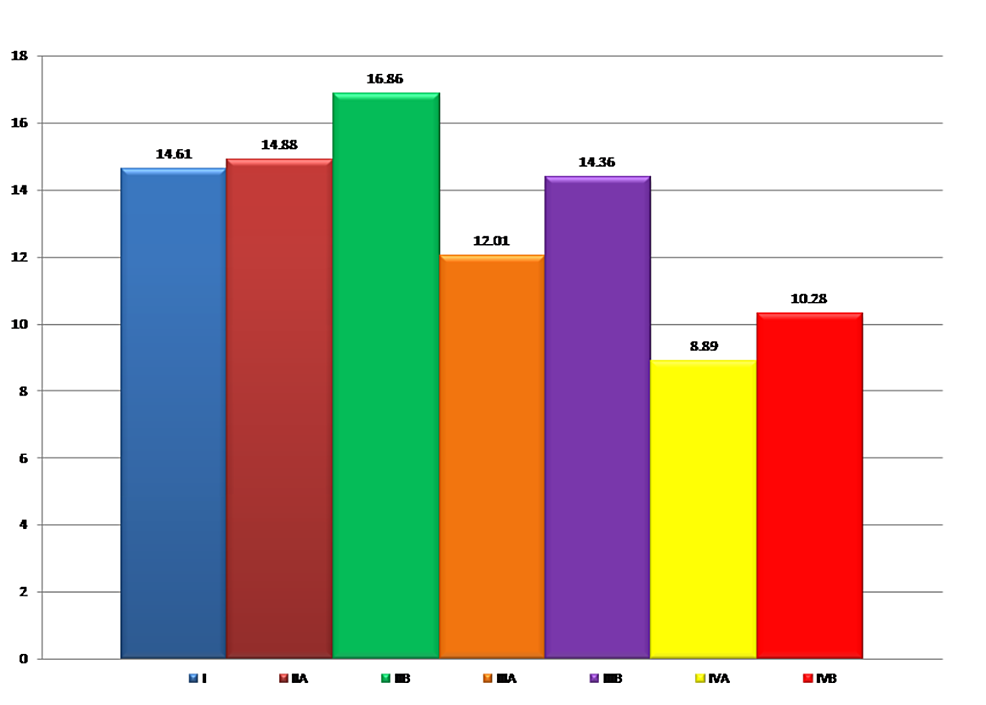 Our results proved a decrease in SBS of composite resin to enamel immediately after bleaching, which was statistically significant when compared with the control group and the antioxidant groups.

Many studies have shown that the inclusion of peroxide ions may be reversed by the use of SA as an antioxidant [10-18]. Hence in this study, 10% solution of SA with application time of 10 min was preferred to be adequate for clinical application of the antioxidant in solution form.

Etched appearance of enamel surfaces after ascorbic acid usage in bleached enamel specimens demonstrated super etching of the already bleached enamel surface under scanning electron microscope (SEM) [19]. Despite the wide-spread application of SA as an antioxidant, Savadi et al. [20] showed that the cumulative effect of SA and bleached material may lead to increased retention of pathogenic microorganisms in enamel surfaces. Usage of flavonoid-rich CB with proanthocyandinins as antioxidants presents as a viable alternative.

Treatment with 6% CB solution enhanced the bond strength of bleached enamel when compared to the bleached group not treated with any antioxidants, both when bonding was performed immediately and after storage in distilled water for two weeks following bleaching .

Both 6% CB solution and 10% SA solutions were found to be effective antioxidants with latter being more effective than the former but not statistically significant.

Moreover, different findings might be due to different antioxidant application methods. In previous studies [4, 22] during the 10-min treatment period the antioxidant solution was continuously refreshed and the enamel surface was agitated, which can enhance the antioxidant effect on the bleached enamel surface while in the present study the specimens were immersed in the antioxidant solution for 10 min as done by Lai et al. [3]. More recently a study conducted by Ismail et al. [18] concluded that an application of higher concentration of SA for a shorter time would reverse the negative effects of bleaching agents on bonding.

Human subjects: Consent was obtained by all participants in this study. MNR Dental College & Hospital ethical commitee issued approval ECR/227/indt/TG/2013. The ethical committee constitute by MNR Dental college and Hospital sangareddy has approved the dissertation titled -Reversal of Compromised Bond Strength of Bleached Enamel Using Cranberry Extract as an Antioxidant-an invitro study. . Animal subjects: All authors have confirmed that this study did not involve animal subjects or tissue. Conflicts of interest: In compliance with the ICMJE uniform disclosure form, all authors declare the following: Payment/services info: All authors have declared that no financial support was received from any organization for the submitted work. Financial relationships: All authors have declared that they have no financial relationships at present or within the previous three years with any organizations that might have an interest in the submitted work. Other relationships: All authors have declared that there are no other relationships or activities that could appear to have influenced the submitted work.

© Copyright 2019
Eggula et al. This is an open access article distributed under the terms of the Creative Commons Attribution License CC-BY 3.0., which permits unrestricted use, distribution, and reproduction in any medium, provided the original author and source are credited.

Comparison of Colour Stability Between Various Denture Base Resins on Staini ...

Possible Mode of Spread of Hepatitis B and Hepatitis C in Chronic Liver Dise ...