Inflammatory bowel disease (IBD) and its complications have been well-established. The literature shows an association between IBD and decreased bone mineral density in the adult population. However, most studies have reported an association between IBD and osteoporosis, while the risk of fractures has not been well-studied. The aim of this meta-analysis is to summarize the best available evidence regarding IBS and osteoporotic fractures.

A review of the literature using the MEDLINE and EMBASE databases was performed during November 2017. We included cross-sectional and cohort studies that reported the relative risks, odds ratios, and hazard ratios comparing the risk of developing osteoporotic fractures among patients with IBD patients, both ulcerative colitis (UC) and Crohn’s disease (CD), versus patients without IBD as controls. The pooled odds ratio (OR) and 95% confidence interval (CI) were calculated using the generic inverse-variance method.

After a review of the literature, seven studies fulfilled the eligibility criteria established during the analysis. A significant association was found between IBD and osteoporosis, with a pooled OR of 1.32 (95% CI, 1.2 - 1.4). Low heterogeneity among the studies was found, I2=42.3. No publication bias was found using the Egger regression test p=0.18. Sensitivity analysis showed that the inclusion of data on children by Kappelman et al. (2007) did not change the results.

A significant association between IBD and the risk of developing osteoporotic fractures was observed in this study. There is a 32% increased risk, which is consistent with different cohort studies previously done.

Inflammatory bowel disease (IBD), including ulcerative colitis (UC) and Crohn’s disease (CD), plays an important role as risk factors for the development of osteoporosis and osteoporotic fractures [1]. The risk of developing osteoporosis ranges between 17% to 41% [2]. The prevalence of both spinal trabecular and peripheral cortical osteoporosis is increased in IBD patients. In addition, there is an increased severity of clinical osteoporosis in young, amenorrheic women [3].

The mechanism of how IBD puts patients at an increased risk of developing osteoporosis and osteoporotic fractures is likely multifactorial. Often, steroids are prescribed to patients with IBD as treatment, and this can itself predispose patients to develop osteoporosis, however, the different studies that have been adjusted for glucocorticoid use have not reported a significant increase of osteoporosis in patients taking this medication [5]. This being said, it appears to be mechanisms that intrinsically affect bone metabolic activity in patients with IBD such as the chronic inflammatory state in IBD leading to bone loss through Tumor necrosis factor (TNF) alpha RANK/RANKL/osteoprotegerin system activation, which promotes osteoclastogenesis [5]. Another contributing factor often present is secondary hyperparathyroidism due to the malabsorption of important nutrients like calcium and vitamin D [6].

The aim of this study is to summarize the best evidence correlating IBD patients with the risk of developing osteoporotic fractures versus control patients without IBD.

Two investigators (DH and BB) personally reviewed two databases, MEDLINE and EMBASE, during the month of November 2017. The search strategy included terms and synonyms for “IBD,” “fractures,” and “osteoporosis.”

Apart from the two major databases used for this meta-analysis, an additional manual review of the references of selected, included articles was also performed. This study meets the criteria checklist in accordance with the preferred reporting items for systematic reviews and meta-analysis (PRISMA) statement.

Any study, in order to be selected for this meta-analysis, had to fulfill the following parameters:

- Case-control, cross-sectional, or cohort studies published as original articles in the two major databases used. These studies should investigate the risk of developing osteoporotic fractures in patients with IBD, either CD or UC.

- Odds ratio (OR), relative risk (RR), or hazard ratio (HR) with 95% confidence intervals (CIs) or documentation and data enough to calculate the previous ratios were provided.

In order to evaluate the quality of each study, the investigators independently used the validated Newcastle-Ottawa quality assessment scale (Figure 1). This scale evaluated each study in terms of the selection of the participants, comparability between groups, as well as the ascertainment of the exposure of interest for case-control studies, and the outcome of interest for cohort studies [7]. 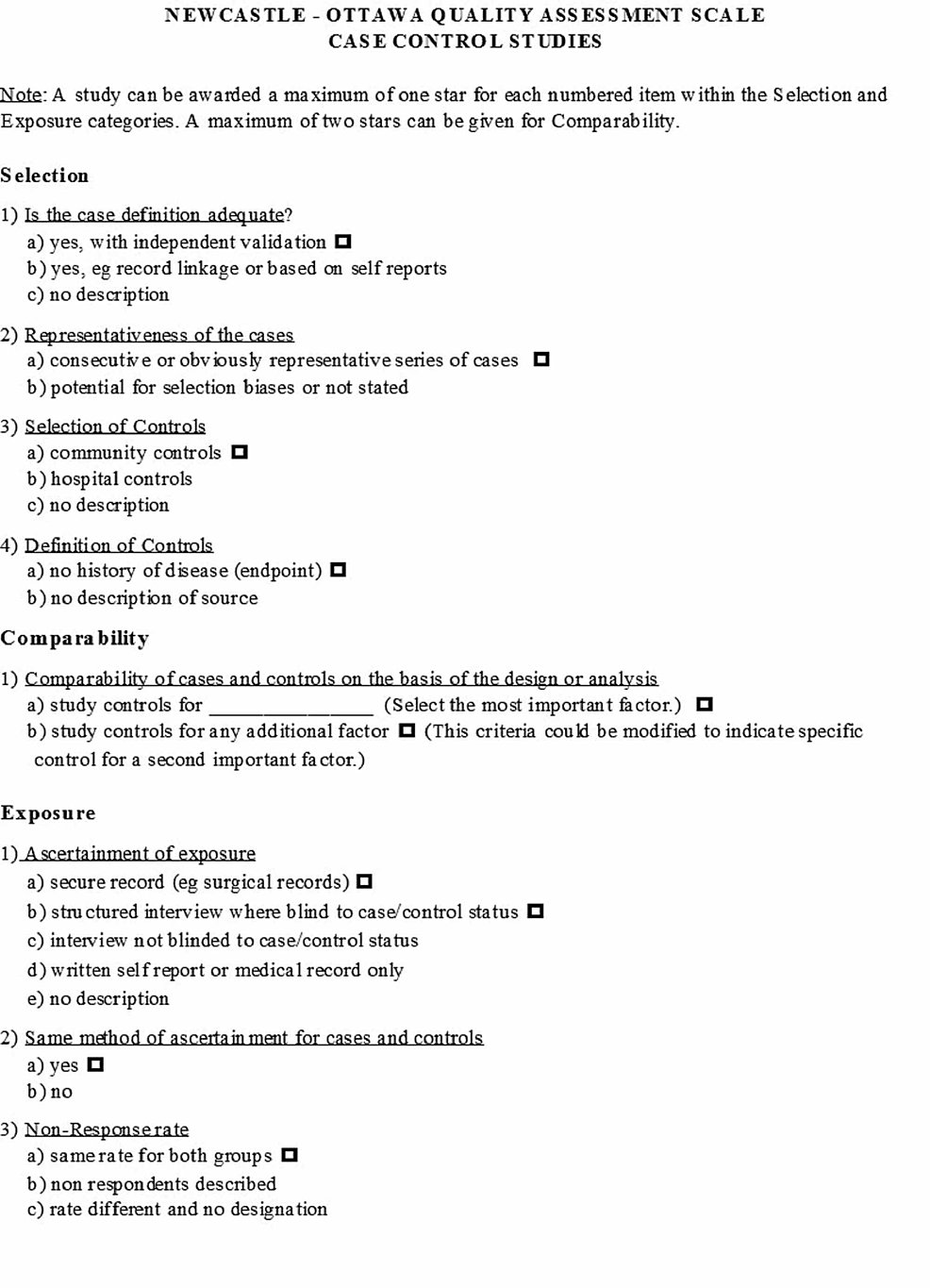 Adapted from "The Ottawa Hospital, Research Center," by Wells G, Shea B. 2014, http://www.ohri.ca/programs/clinical_epidemiology/oxford.asp

A Microsoft Excel (Microsoft Corporation, Redmond, Washington, US) data collection form was used to summarize the most relevant information obtained from these studies. This table contained the first author's last name, the country where the study was conducted, year of publication, demographics, the Newcastle-Ottawa quality assessment scale, the total number of participants, characteristics of the participants, the method used to diagnose IBD, the method used to determine fractures, adjusted effect estimates with 95% CI, and covariates that were adjusted in the multivariate analysis (Table 1).

Table 1: Characteristics of studies included in the analysis.

To ensure accuracy, all investigators performed the data extraction process independently. Any data discrepancy was also resolved by referring back to the original articles.

An advanced search yielded 7237 articles on Medline and 2171 articles on EMBASE. After the exclusion of 6550 articles that were duplicated, 2858 underwent a title and abstract review. A total of 2802 articles were excluded, as they were case reports, book articles, letters to the editor, or review articles without the information needed for the analysis, leaving 56 articles for a full-length article review. A total of 45 articles were dismissed at this time, as they did not report the outcome we were looking for. Two articles did not have comparators so they were also excluded. A total of seven studies were used for statistical analysis [16], five of them were cohort studies, one case-control study, and one cross-sectional study. The outlines of the literature review and study selection process is outlined in Figure 2. The clinical characteristics of each study and the quality assessment are described in Table 1. 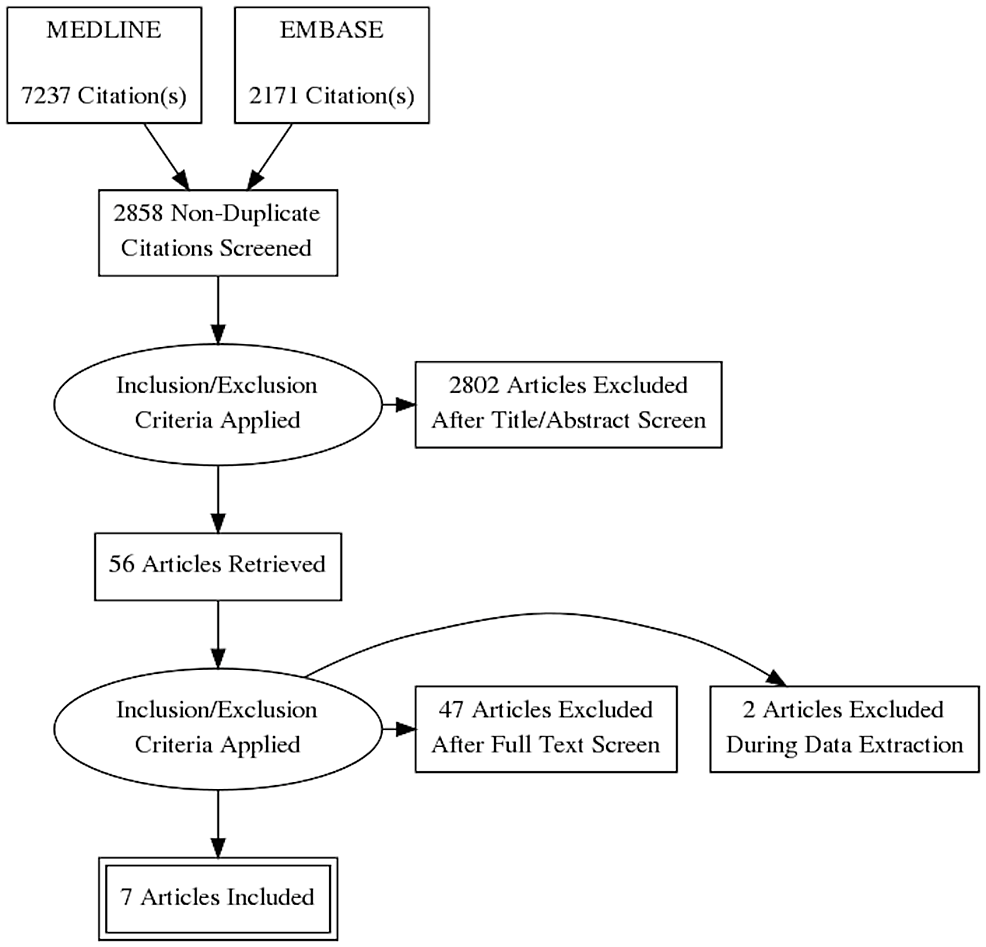 The overall analysis found a higher risk of osteoporotic fractures in patients with IBD, either UC or CD, as compared with the control individuals who did not have IBD. The odds ratio (OR) was 1.32 (95% CI: 1.20 - 1.45), P <0.001, as shown in Figure 2. Sensitivity analysis showed that the inclusion of data on children by Kappelman et al. (2009) did not affect the results, as shown in Figure 3. 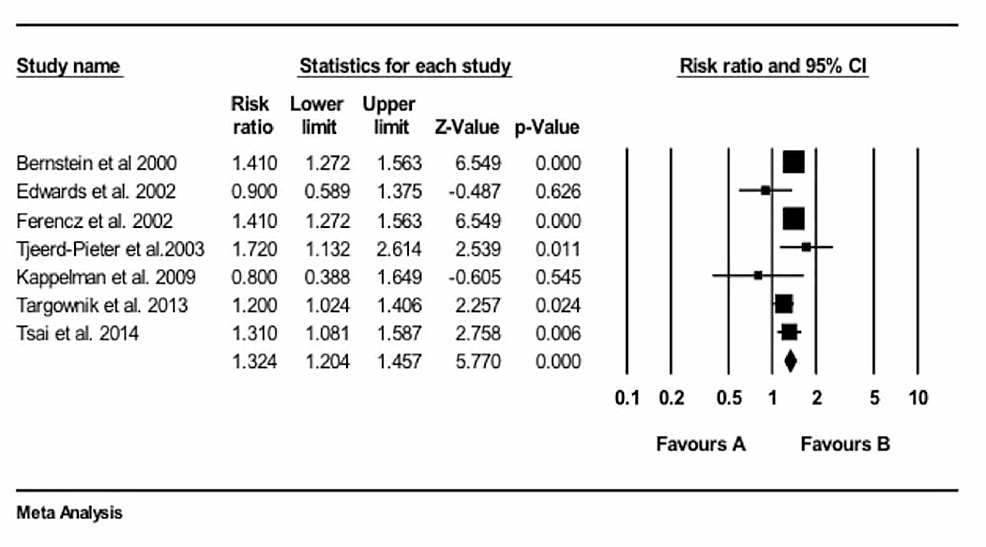 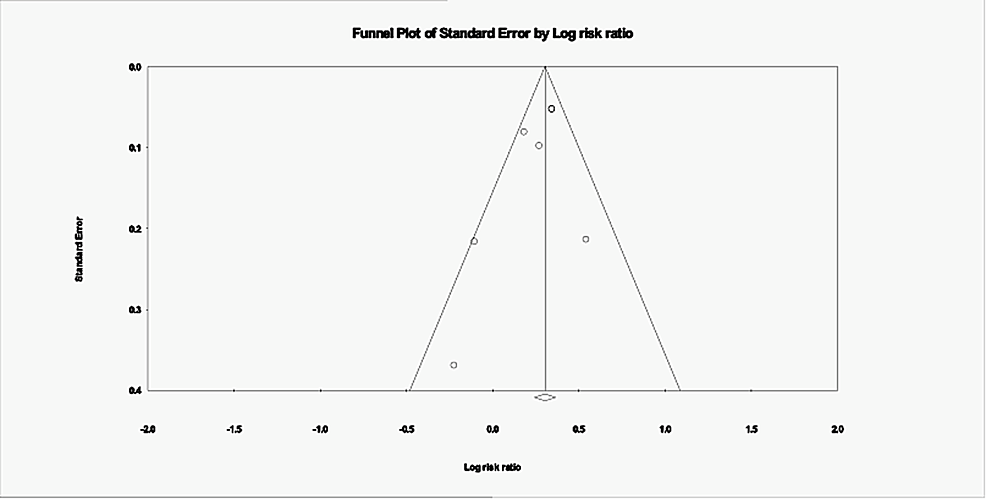 This is the first meta-analysis that assesses the relationship between IBD and fractures. A lot of data has been obtained to assess the relationship between IBD and osteoporosis, which is defined as reduced mineral density. However, the risk for developing bone fractures is the one associated outcome that really has significant morbidity, mortality, and healthcare cost [16,18].

This meta-analysis takes into consideration research studies done all over the world, including the USA, UK, Hungary, China, and others. It collects more than 200,000 patients and records. We included a study done by Kappelman et al. (2009) that took into consideration the pediatric population [9]. This study showed no increased risk of fractures in patients below the age of 20. Sensitivity analysis showed that the inclusion of this article in the pool of information did not have a big impact on the final outcome. These results confirm that the risk of osteoporotic fractures increases with age, and even patients with IBD tend not to show accelerated signs of bone disease until years after the disease has progressed [19].

The data used for this meta-analysis were matched for the use of corticosteroids. Steroids by themselves put patients at increased risk of fractures. The most significant effect of steroids n the bones is inhibition of osteoblastic activity, which decreases bone formation. This inhibition in the number of osteoblasts is secondary not only to a decrease in the formation but also an increase in the death of mature osteoblasts. At the same time, glucocorticoids decrease the function of the remaining osteoblasts directly and indirectly through the inhibition of insulin-like growth factor I expression [20]. Since most IBD patients are or have been on steroids at some point of the disease, this could be a confounding factor. Direct standardization was used to adjust for this confounder.

After adjusting for the use of this medication, the decrease in bone mass and the increase of developing bone fractures was significant enough to confirm that an inflammatory state is enough to make changes to the bone metabolism.

A low I2 value on the statistical analysis suggests that the variation across studies is due to a low heterogeneity rather than chance.

More studies should be done to calculate the risk to develop fractures in the pediatric population since early identification, risk factors modification, and treatment could slow the risk of bone mass loss and improve morbidity in that specific population.

A significant association between IBD and the risk of developing osteoporotic fractures was observed in this study. There is a 32% increased risk of developing osteoporotic fractures in patients with IBD as compared to individuals without IBD used as controls. There was no significant increase of osteoporosis in IBD patients taking corticosteroids after this variable was adjusted through direct standardization.

© Copyright 2019
Hidalgo et al. This is an open access article distributed under the terms of the Creative Commons Attribution License CC-BY 3.0., which permits unrestricted use, distribution, and reproduction in any medium, provided the original author and source are credited.

Adapted from "The Ottawa Hospital, Research Center," by Wells G, Shea B. 2014, http://www.ohri.ca/programs/clinical_epidemiology/oxford.asp

Table 1: Characteristics of studies included in the analysis.