Osteomyelitis is uncommon in adolescents and children [1]. A wide range of bacteria could be the cause for osteomyelitis. The most common pathogen is Staphylococcus aureus counting for more than 50% of all cases. Streptococcus, Escherichia coli, Klebsiella and Proteus are other bacterial pathogens that can cause osteomyelitis [1-2].

Osteomyelitis due to Salmonella is extremely rare in healthy individuals. Only a few cases have been reported in the literature [1, 3-4]. Usually, Salmonella osteomyelitis is associated with hemoglobinopathies such as sickle-cell disease or thalassemia and it seems to be a significant cause of morbidity and mortality in these individuals [1, 3-8]. Other predisposing factors that have been associated with Salmonella osteomyelitis are the history of trauma or surgery, steroids, malignancy (lymphoma), liver and cardiovascular disease, autoimmune disease (systemic lupus erythematosus), diabetes, chronic granulomatous disease, immunodeficiencies and HIV infection [3-4].

A 12-year-old non-ambulatory male was referred to the emergency department of our hospital. He complained about pain in the left knee, fever (up to 40o C), swelling, inability to move and walk properly. Regarding his personal medical history, no trauma or chronic disorder was referred by the patient or the parents. Clinical examination revealed swelling of the knee, stiffness, pain, and restriction of passive movement. Laboratory tests revealed a serum white blood cells (WBC) count of 12700/ μl (normal: <10000/μl), an erythrocyte sedimentation rate (ESR) of 49 mm per hour (normal: <25 mm/h) and C-reactive protein (CRP) 55 mg/L (normal: <5 mg/L) with normal liver function and electrolyte values. Blood cultures were negative. Radiographs revealed lytic lesions in the metaphyseal region of the proximal tibia (Figure 1). Osteomyelitis was suspected. The patient was admitted for monitoring, per os antibiotic therapy with amoxicillin and clavulanic acid and further evaluation. 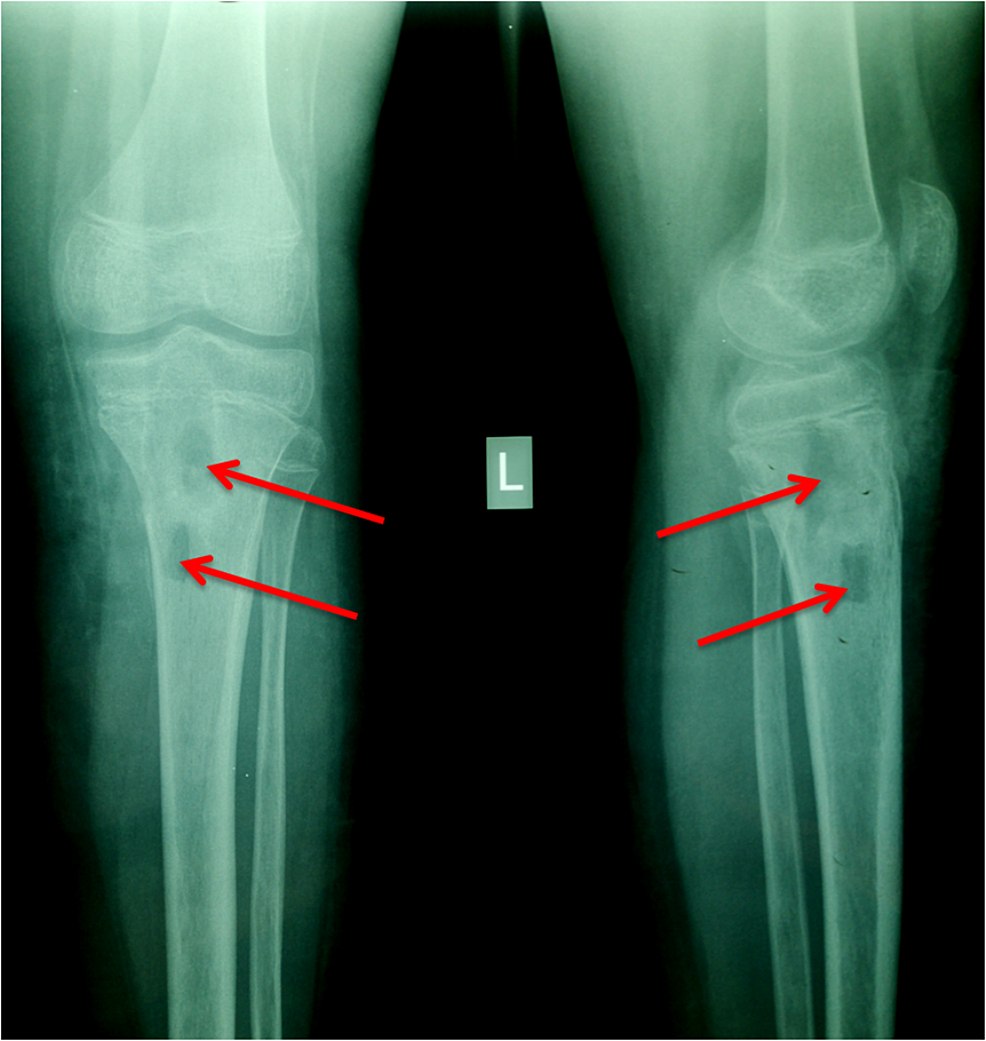 Lytic lesions were further evaluated with knee computed tomography (CT) and magnetic resonance imaging (MRI) (Figures 2, 3). The MRI and CT revealed that the lesions extended not only in the metaphyseal region but also in the epiphyseal. 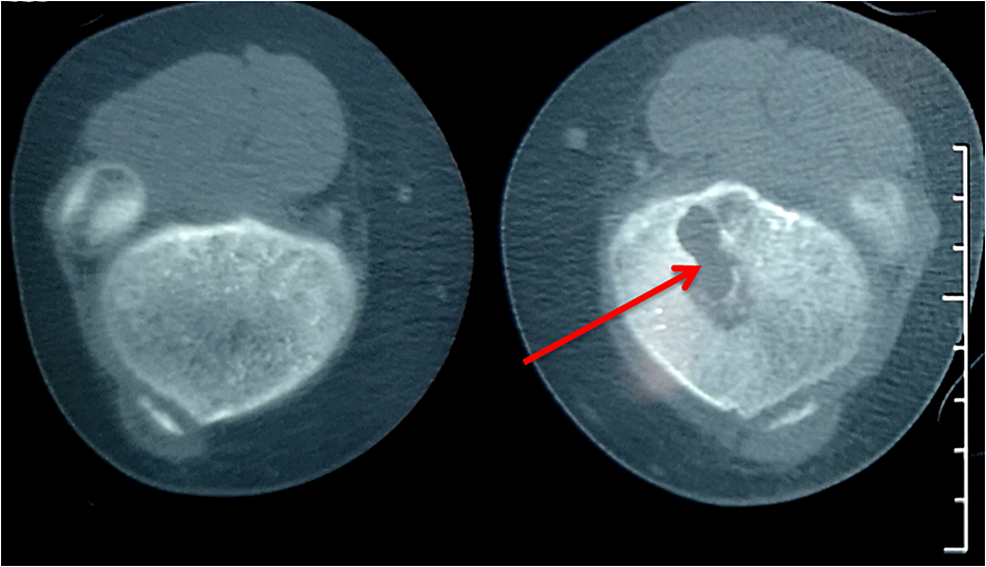 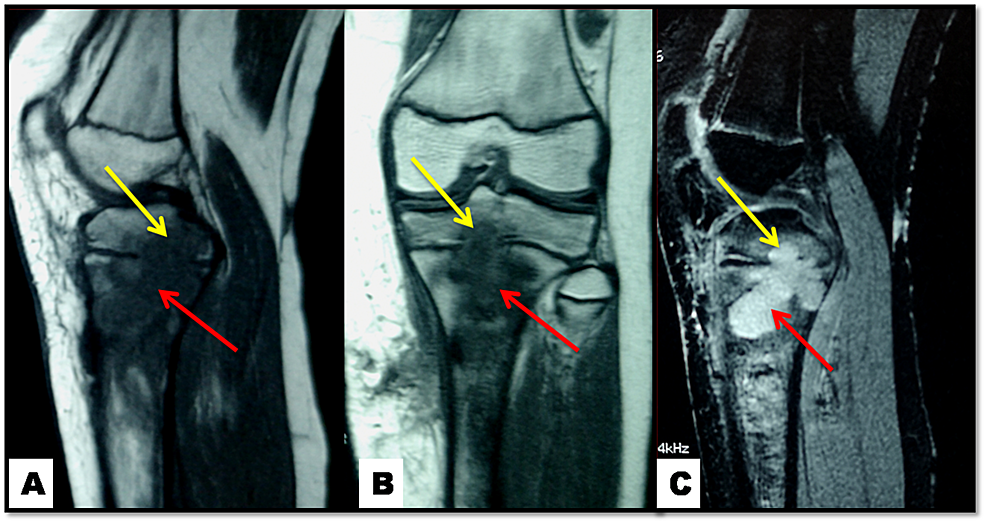 After pediatric infectious diseases specialist's (PIDS) consultation a minimally invasive surgery was decided. Bone and lesion sample for cultures and histological examination was taken and curettage of the lytic lesion was performed. Cultures were negative but histological soft tissue examination revealed inflammation. Intravenous (IV) clindamycin was administered for 12 days. Per os antibiotic treatment (clindamycin) was totally administered for eight weeks. 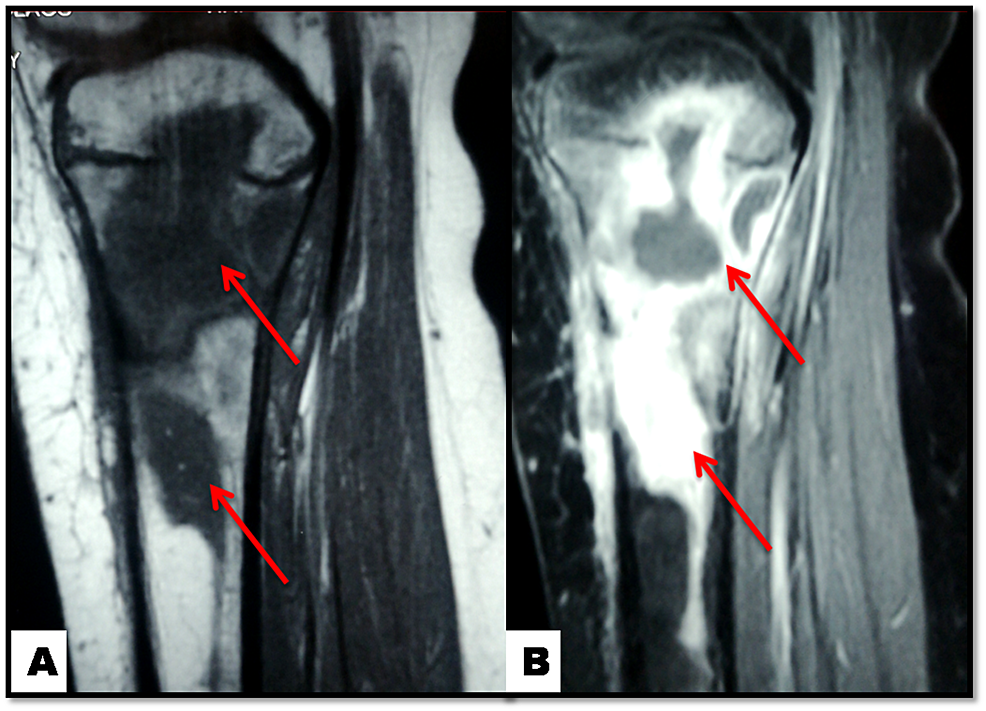 Second surgery for curettage and debridement was performed. Samples for cultures were taken. Aspirates were cultured onto selective agar media and inoculated in blood culture bottles. Traditional cultures remained negative. The cultures inoculated in blood culture bottles revealed Salmonella non-typhi sensitive in cephalosporins and quinolones. After PIDS consultation, IV ceftriaxone was administered for 12 days and two weeks per os antibiotic treatment (ciprofloxacin) was followed as an outpatient.

The patient was followed up by clinical, imaging and laboratory (WBC, ESR and CRP) examinations every week the first month, monthly the next five months and every six months until the two years follow up. At six month post-surgery follow up a knee MRI was performed (Figure 5). MRI revealed that the bone marrow had improved and the lytic lesion (Salmonella osteomyelitis) was reduced. At two years follow up the patient had fully recovered (Figure 6). 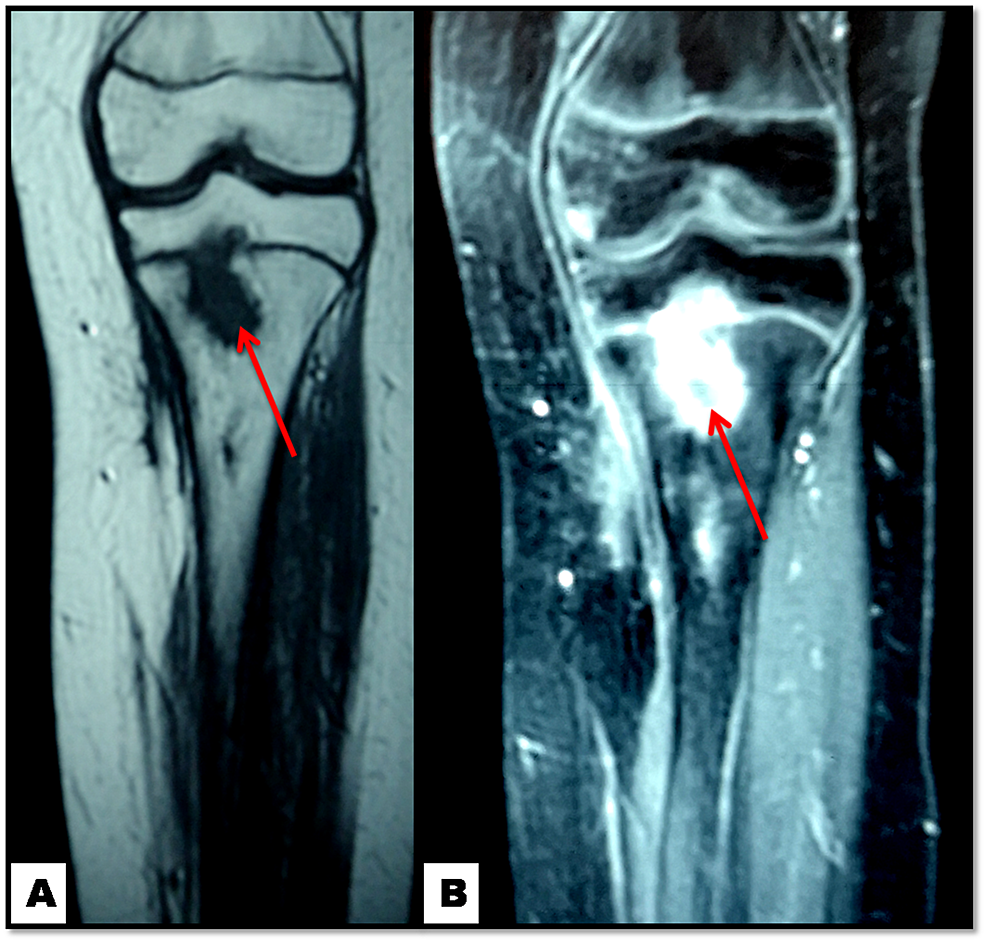 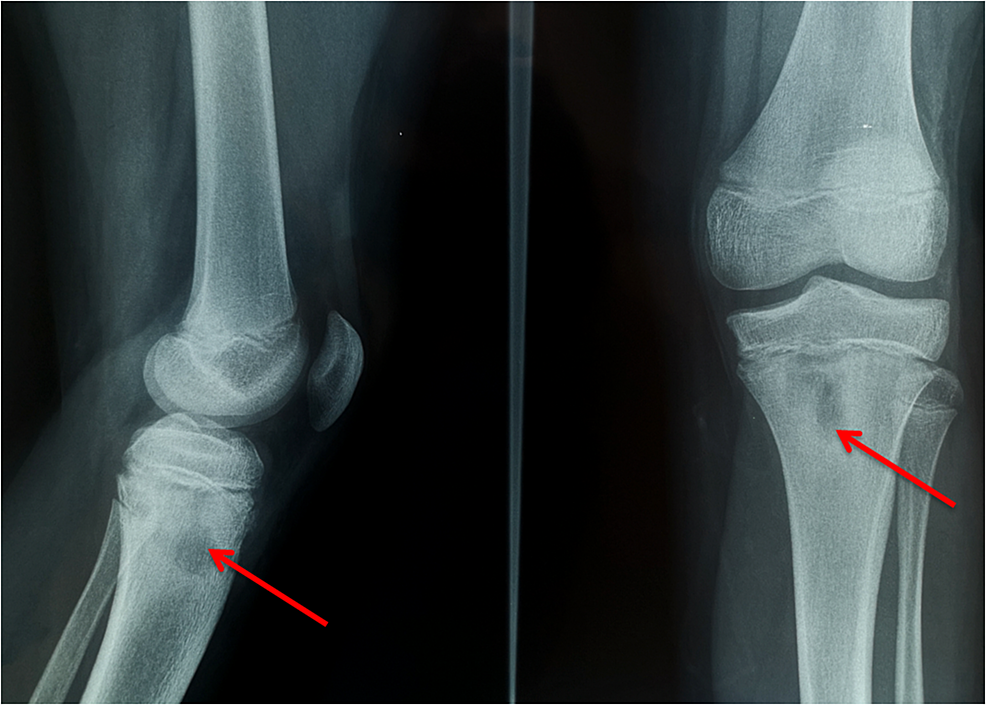 In humans, Salmonella infection can manifest with variable clinical symptoms. It can be divided into five syndromes: gastroenteritis (food poising), enteric fever (typhoid), bacteremia or septicemia, focal infection (including soft tissue or bone infection) and a chronic carrier state [1, 5].

Salmonella infection is one of the most common food-borne infections. It is caused by contaminated water, non-pasteurized milk and food (eggs, poultry) [1, 5-6]. Amphibians and cold-blood reptiles (like snakes, turtles and lizards) can cause Salmonella infections through skin contact (exotic pet reptile owners) or by use in folk medicine (snake-based medicines) [6].

Salmonella osteomyelitis is usually located in the diaphyseal region of long bones, typically in the femur and the humerus [3-4, 6]. Other bones commonly affected are the radius, ulna, tibia, and vertebrae [3]. Our case concerned the proximal tibia at the metaphyseal and epiphyseal region, which is uncommon. It was very difficult to diagnose because of the uncommon location of the lytic lesion and because our patient was a previously healthy child.

Clinical deficits, radiographs, CT scan, MRI scan and inflammation markers are used to diagnose osteomyelitis. Blood cultures and cultures on agar media can identify the microorganism that causes osteomyelitis and the sensitivity in antibiotics, so the appropriate therapy is administered. In some cases though, it is difficult to identify the microorganisms in traditional cultures. In our case, Salmonella was isolated only when we inoculated sample in blood culture bottles.

Targeted therapy for Salmonella osteomyelitis, according to the results of the culture, is fundamental. Usually, Salmonella is sensitive to penicillin antibiotics, third-generation cephalosporin, fluoroquinolones and chloramphenicol [1, 3-8]. Salmonella infection requires extensive and sometimes multiple debridements in addition to prolonged antibiotic therapy [6]. Duration of treatment ranges from five weeks to six months [4]. In our case, Salmonella non-typhi was sensitive in all the above antibiotics. Our patient required two surgical debridement procedures and two periods of antibiotic therapy.

© Copyright 2019
Vynichakis et al. This is an open access article distributed under the terms of the Creative Commons Attribution License CC-BY 3.0., which permits unrestricted use, distribution, and reproduction in any medium, provided the original author and source are credited.