Digoxin is used to treat patients with conditions such as heart failure with reduced ejection fraction and atrial fibrillation [1-2]. Digoxin increases intracellular calcium, resulting in increased contractility [1]. A therapeutic concentration of digoxin is reported as 0.8-2.0 ng/mL [3-4]. Because of its narrow therapeutic index, patients on digoxin are at risk for toxicity, which can manifest with nausea, vomiting, visual changes, altered mental status, hyperkalemia, and cardiovascular collapse [1-4]. However, the clinical significance of digoxin levels in a patient with a pacemaker is currently unclear.

A 75-year-old woman presented to a local emergency department with a chief complaint of lip swelling, which had resolved prior to evaluation without any interventions. She had a recent hospitalization a month prior to presentation and was treated for heart failure. Her medication list revealed that she had been discharged on digoxin. Her past medical history was pertinent for heart failure with a reduced injection fraction with a ventricular pacemaker in place.

She presented with mild chest pain. Initial vitals included blood pressure 98/28 mmHg, heart rate 104 beats per minute, respiratory rate 18 breaths per minute, and oxygen saturation of 94% on 3 L/min of oxygen via a nasal cannula. Exam revealed a 2/6 systolic murmur, a pacing device in the chest wall, dry mucous membranes, and disorientation to place and situation, which was reported to be her baseline mental status per her family members.

EKG showed a ventricular paced rhythm at a rate of 96 (Figure 1). Lab results included potassium 4.8 mmol/L (normal range 3.5-5.- mmol/L), creatinine 1.2 mg/dL (normal range 0.7-1.3 mg/dL), troponin 0.08 ng/mL (normal <0.03 ng/mL), and digoxin 13.5 ng/mL (therapeutic window 0.8-2.0 ng/mL). After a discussion with the family and patient, the decision was made to treat the patient with supportive care in the emergency department (ED). After initial management, she was admitted and remained asymptomatic during her hospital stay. Her digoxin concentration trended down at the expected rate (Figure 2). It was recognized that the patient had mistakenly been taking a 10-fold overdose of digoxin daily since she had filled her prescription (6.25 mg daily vs 0.625 mg daily). She was discharged on hospital Day 6 in good condition. 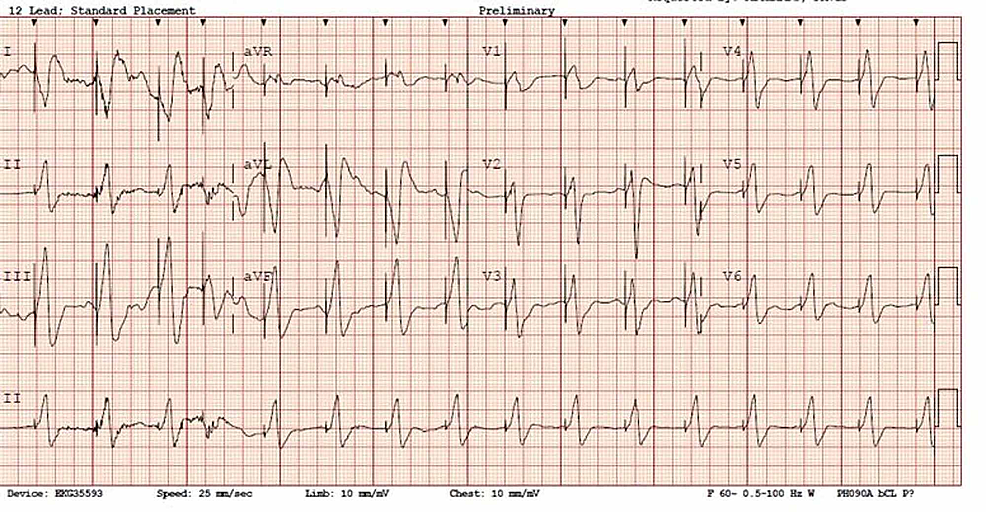 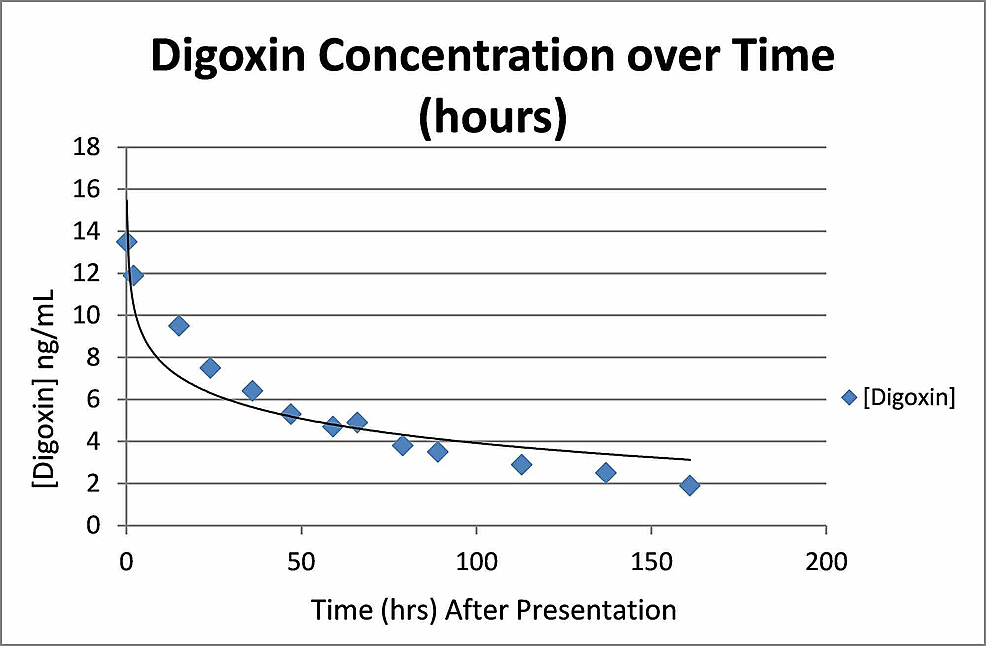 We report a patient with a digoxin concentration of 13.5 ng/mL that was treated without digoxin-specific antibody fragments. Digoxin is a substrate for P-glycoprotein [8]. The potential for toxicity, coupled with its narrow therapeutic window, reinforces the importance of proper digoxin dosing and therapeutic drug monitoring [9]. The reported volume of distribution of digoxin is 5-7 L/kg. After oral administration, digoxin is absorbed and distributed in the body, reflecting a two-compartment model [8-10]. In therapeutic dosing, digoxin has an elimination half-life of approximately 36 hours in a patient with normal renal function [10]. Concentrations over the patient’s hospital stay were plotted (Figure 2), resembling first-order kinetics. The elimination half-life of digoxin in this patient was 36-37 hours, which is similar to other reports of digoxin pharmacokinetics [8-10].

The clinical significance of a patient on digoxin that has an indwelling pacemaker is unclear. Taboulet et al. reported 51 patients with cardiac glycoside intoxication managed in an intensive care unit with cardiac pacing and/or Fab fragments. Overall mortality was 13%, and they found that the prevention of life-threatening arrhythmia failed in 8% of cases with Fab and in 23% with pacing [10]. The authors encouraged the use of Fab fragments as first-line therapy. In regards to pacemakers, it can be considered that the device is protective in digoxin toxicity in that it provides a paced rhythm, thus decreasing the chances for a malignant rhythm to develop. However, it must also be considered that in a patient with digoxin toxicity, the heart is susceptible to dysrhythmia and exogenous electrical signals may precipitate a deleterious rhythm as suggested by Taboulet et al. Our patient did not develop any dysrhythmias and her repeat EKGs revealed that she remained in a ventricularly paced rhythm throughout her stay.

An elevated serum digoxin concentration can serve as an indication for treatment with digoxin-specific antibody fragments; however, the treatment indications for digoxin-specific antibody fragments are not consistent. The effects of an indwelling pacemaker in a patient with digoxin toxicity are uncertain. These should be considered in the initial management of digoxin overdose in the emergency department.

© Copyright 2019
Bridwell et al. This is an open access article distributed under the terms of the Creative Commons Attribution License CC-BY 3.0., which permits unrestricted use, distribution, and reproduction in any medium, provided the original author and source are credited.