Multidetector CT (MDCT) has emerged as a useful option for early diagnosis of interstitial lung disease (ILD) with adequate accuracy.

A total of 80 patients with restricted pulmonary functions and clinical suspicion of ILD were enrolled in the study. MDCT evaluation was done using Siemens Somatom Force 384 slice multidetector computer tomography machine. Pattern analysis for reticular opacities, nodules and lung opacities was done to reach at a diagnosis. Final diagnosis was based on correlation of radiological and clinicopathological findings. Diagnostic efficacy of MDCT was evaluated in terms of sensitivity, specificity, positive predictive value (PPV), negative predictive value (NPV) and accuracy for detection of ILD.

MDCT as a single modality had a high sensitivity for detection of ILD and could be recommended as first line diagnostic imaging technique.

As there are numerous forms of ILD such as idiopathic pulmonary fibrosis (IPF), non-IPF forms of idiopathic interstitial pneumonia (IIP), connective tissue disease associated ILD (CTD-ILD) and hypersensitivity pneumonitis (HP) which can have similar clinical presentations, patients with suspected ILD must undergo an evaluation that adequately establishes a confident diagnosis of a specific ILD as treatment and various management decisions are diagnosis-specific and may vary considerably according to the specific form of ILD that is diagnosed.

Although the combination of history, physical examination, chest X-ray, and other appropriate laboratory testing (peripheral blood tests and lung physiologic testing) may provide a likely diagnosis, additional testing is usually needed to reach a confident diagnosis of a specific ILD. High-resolution CT (HRCT) of the thorax can provide invaluable information that strongly supports a specific diagnosis and may be diagnostic (e.g., typical changes of Usual Interstitial Pneumonia) such that further testing with bronchoscopy or surgical lung biopsy is not required. Indeed, the HRCT has become a standard test for the evaluation of patients with possible ILD [4,5]. Recent studies have shown that multidetector CT (MDCT) thorax helps in better detection, assessment of distribution, evaluation of extent, and characterization of different findings in ILDs, hence increasing the confidence in the diagnosis [6,7]. Hence, the present study was planned to evaluate the role of MDCT in interstitial lung disease at a tertiary care centre in Lucknow.

The study was carried out at the Department of Radiodiagnosis in collaboration with the Department of Pulmonary Medicine, Era's Lucknow Medical College, Lucknow over a period starting from January 2016 to June 2017 after obtaining clearance from Institutional Ethics Committee and obtaining informed consent from the patients. A total of 80 patients age >30 years and both the genders who were clinically diagnosed/suspicious of interstitial lung disease having pulmonary function tests indicative of restrictive/obstructive pattern were enrolled in the study. The study was planned as a descriptive study and sample size was calculated as 74 at 90% confidence and 10% error allowance. However, after adding for contingency the sample size was projected at 80.

Correlation with clinicopathological diagnosis was done in order to achieve the final diagnosis.

On evaluating the performance of MDCT against final diagnosis for detection of ILD, 32 cases were true positive, 13 were false positive, three were false negative and 32 were true negative. Correspondingly, the sensitivity, specificity, positive predictive value, negative predictive value and accuracy of MDCT in detection of ILD was 91.4%, 71.1%, 71.1%, 91.4% and 80%, respectively. The level of agreement between MDCT and final diagnosis was substantial (k = 0.61; p < 0.001) (Table 4).

Table 4: Diagnostic efficacy of MDCT for diagnosis of ILD

In our study, the mean age of patients was 58 years, however interstitial lung disease was seen in adults as well as children. No significant gender wise differences were seen with the male:female ratio of test subjects being 0.95:1. However, a variability in gender profile based on the underlying disease has been reported in literature. Lim et al. reported an equal male-to-female ratio in idiopathic pulmonary fibrosis, collagen vascular disease associated pulmonary fibrosis and hypersensitivity fibrosis but a female dominance in sarcoidosis and male dominance in pneumoconiosis in their study [9]. In another study from a tertiary care centre in India, Gagiya et al. reported a male dominance (66.5%) but Kumar et al. in another study from India reported female dominance (54.64%) [10,11].

Smoking is an identifiable risk factor in more than two-fifth cases of RBILD, desquamative interstitial pneumonia (DIP) and pulmonary Langerhans-cell histiocytosis (PLCH). The dominance of smokers in present study also endorsed an increased risk of ILD in smokers as also observed by Jin et al. [12]. 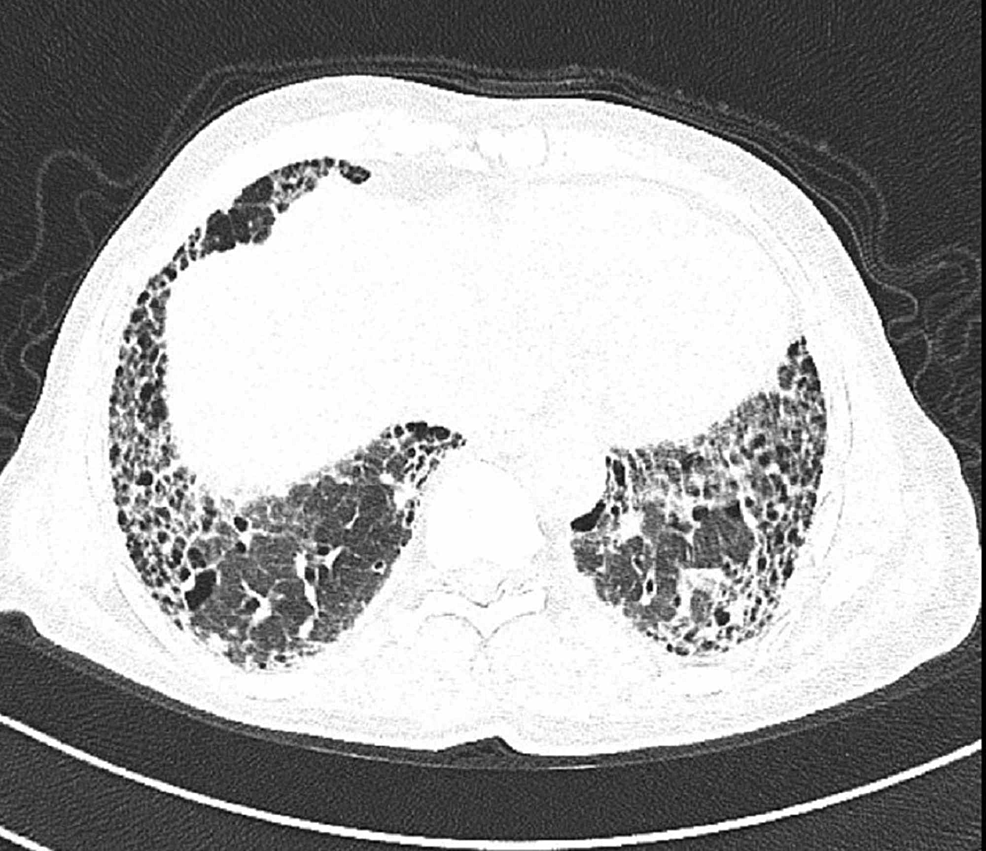 Cryptogenic organizing pneumonia (COP) was found to be the next most common interstitial lung disease. The principal findings were ground glass opacities and reticulation involving predominantly subpleural and basal lungs. Nodular pattern was random, and thus provided a highly suggestive diagnosis of COP (Figure 2). Traction bronchiectasis was noted in all these patients. 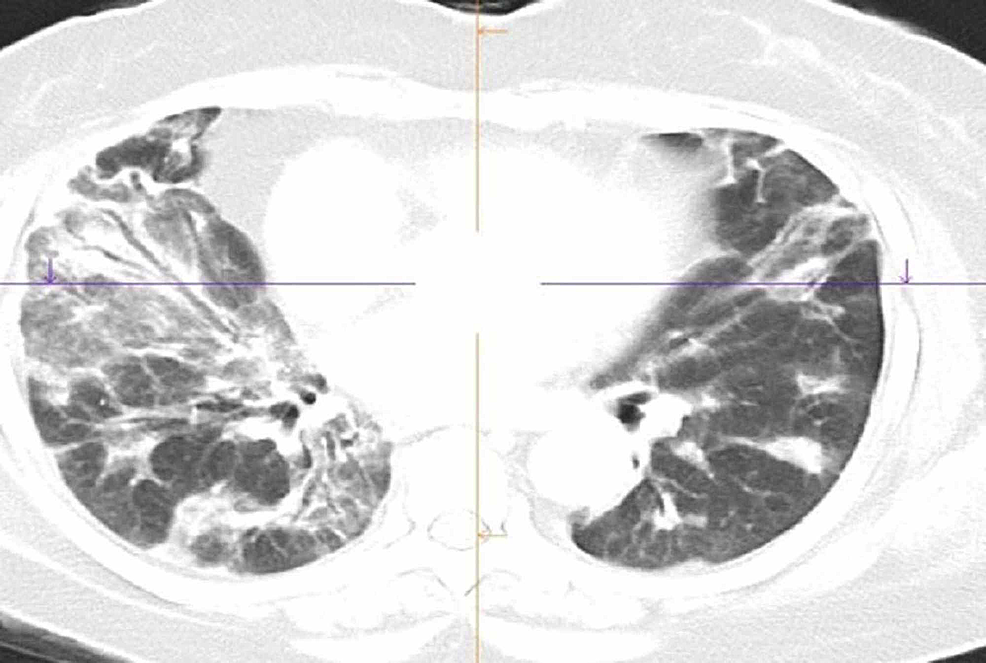 We did not find honeycombing pattern in any of the COP cases as observed by Lee et al. in some of the cases in their series [13]. There were four cases with the “atoll” or reversed halo sign (a central ground-glass opacity surrounded by a crescent or ring of consolidation) which is found in COP, but can be seen in other conditions like chronic eosinophilic pneumonia (CEP), paracoccidioidomycosis or tuberculosis [14,15]. 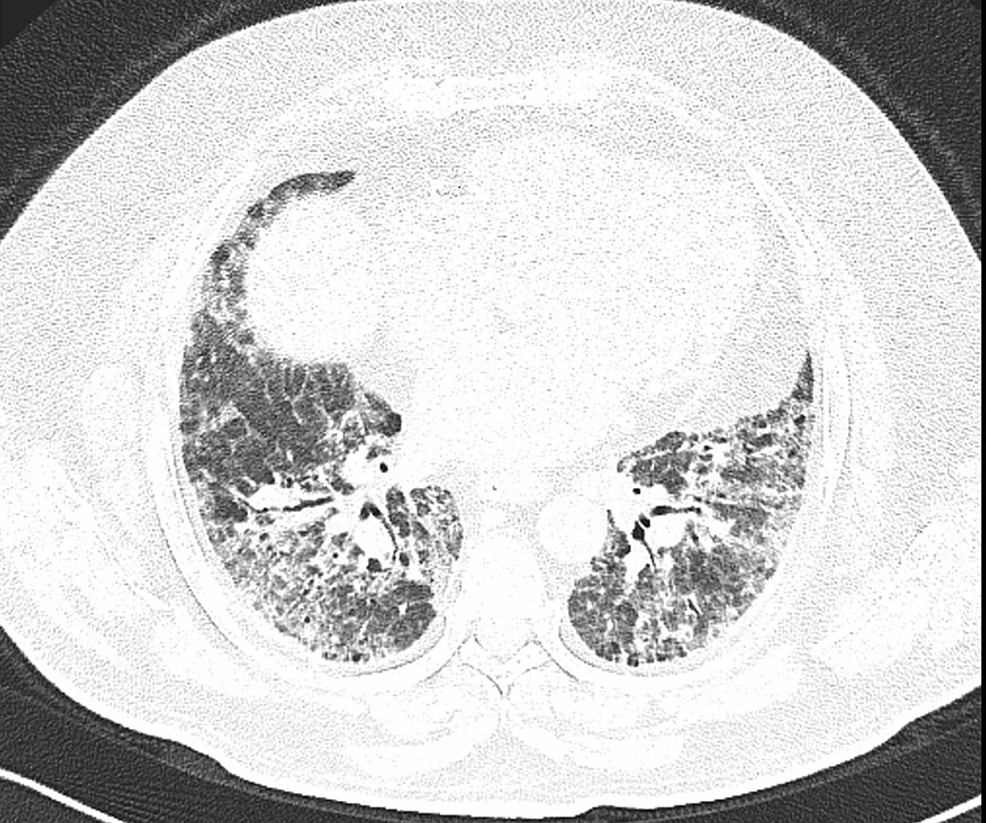 The findings of present study thus showed that MDCT is a useful modality for detection and differentiation of ILD into different subtypes. It was also revealed that apart from MDCT imaging features, patient’s clinical history also helps to improvise the accuracy of results.

The findings of present study concluded that MDCT is a useful modality for detection of ILD and its spectrum in suspicious cases, however, clinicopathological correlation and history taking is essential in order to obtain a more accurate and precise diagnosis. MDCT as a single modality had a high sensitivity for detection of ILD and could be recommended as first line diagnostic imaging technique.

Human subjects: Consent was obtained by all participants in this study. INSTITUTIONAL ETHICS COMMITTEE, ERA UNIVERSITY, LUCKNOW issued approval ELMC/R_CELL/EC/2018/55. I AM HAPPY TO INFORM YOU THAT RESEARCH ON THE TOPIC ENTITLED 'ROLE OF HRCT TEMPORAL BONE IN PREOPERATIVE ASSESSMENT OF TEGMEN HEIGHT IN CHRONIC OTITIS MEDIA PATIENTS" HAS BEEN APPROVED BY THE INSTITUTIONAL ETHICS COMMITTEE, ERA UNIVERSITY, LUCKNOW. Animal subjects: All authors have confirmed that this study did not involve animal subjects or tissue. Conflicts of interest: In compliance with the ICMJE uniform disclosure form, all authors declare the following: Payment/services info: All authors have declared that no financial support was received from any organization for the submitted work. Financial relationships: All authors have declared that they have no financial relationships at present or within the previous three years with any organizations that might have an interest in the submitted work. Other relationships: All authors have declared that there are no other relationships or activities that could appear to have influenced the submitted work.

Table 4: Diagnostic efficacy of MDCT for diagnosis of ILD

Is COVID-19 Similar in Pregnant and Non-Pregnant Women?