This was a case-control study. Fourteen cases were considered with a displaced midshaft clavicle fracture, initially treated non-surgically, but which developed symptomatic non-union and required surgical treatment. The control group was a cohort of 18 patients with a displaced midshaft clavicle fracture, who had surgical treatment in an acute setting (<3 weeks). Our cases had a median follow-up of 77 months and were retrospectively analyzed. All those in the control group had a 12-month prospective follow-up evaluation. The variables measured were Constant score, time to discharge to work, and bone union rate.

The median Constant score at final follow-up for surgically treated non-unions was 87.5 (control group 84.5, p > 0.05). The median time to complete return to work was 3.2 months in the control group and 9.7 months in the case group (p=0.001). Hundred percent of those patients who were initially treated with surgery had bone union without other treatment. Two out of 14 cases required a second surgery with a plate and bone graft to achieve bone union.

Displacement is probably the main risk factor for middle-third clavicle fractures to develop a non-union, which has created a trend in the last five years towards their surgical treatment [1].

This trend results from the positive results in the two main objectives of this treatment. One, reducing the risk of the non-union of displaced midshaft clavicle fractures, where an odds ratio (OR) of 0.22 was reported for surgical treatment in systematic reviews or an overall 1.4% rate of non-union as compared with 14.5% for non-surgical treatment [2-3]. Also, the Constant score was demonstrated to be higher after one year of surgically treated displaced midshaft fractures [4-5]. This was validated in a study on patients with workers' compensation, who had type 2b of Robinson’s classification, in which surgical treatment with plate and screws had a higher Constant score after a year, an earlier return to work, and a lower rate of non-union (as compared to those with non-surgical treatment) [6-7].

Even with these results, we cannot recommend surgical treatment of displaced middle-third clavicle fractures for all patients. The number needed to treat (NNT) to prevent one non-union has been reported from 4.8 to as high as 10.3 and 18.5 for surgical treatment [2,8-9]. Among the arguments against surgery is an elevated rate of reoperation, which is largely associated with symptoms related to plate use [10]. Other reported complications are infections of the surgical wound as well as transient neurological symptoms [11].

The cases did not receive previous treatment for non-union issues until surgery. Both groups were surgically treated with open surgery and osteosynthesis (OTS), which included plates and screws. An iliac crest bone graft was used in the non-union group.

The inclusion criteria for both groups were:

3. A CT scan during follow-up for bone union evaluation

4. Functional evaluation at least after 12 months of follow-up

The exclusion criteria were:

The variables measured included: (1) Time to discharge for return to work, measured in months; (2) Bone union confirmed by CT scan; (3) Functional results measured with the Constant score [15]. A Kaplan-Meier analysis (Log-Rank test) was done to measure the time to discharge and the return to work. A median difference test for independent variables was also done, which considered a significant difference to be p-value ≤ 0.05. For all tests, STATA v 11.2 software was used (StataCorp LP, TX, USA).

A total of 17 consecutive patients went to surgical treatment for a symptomatic non-union of a displaced middle-third clavicle fracture from years 2012 to 2014. Of them, 14 patients completed at least one-year follow-up, had a CT scan during follow-up, and went through a functional evaluation. The median time to surgery since the initial trauma of the non-union group was 5.2 months (4-15). The control group was a consecutive cohort of 18 patients, surgically treated for a displaced midshaft clavicle fracture between 2010 and 2012. Both groups included only patients with labor accidents treated in our hospital, who were under the working accidents compensation national law.

Our cases had a median follow-up of 77 months (range: 13 to 91). All those in the control group had a 12-month follow-up evaluation. The description of both groups can be observed in Table 1.

The median Constant score at final follow-up for surgically treated non-unions was 87.5 and for the control group, it was 84.5 (p >0.05). A detailed Constant score distribution and comparison between groups can be observed in Figure 2. 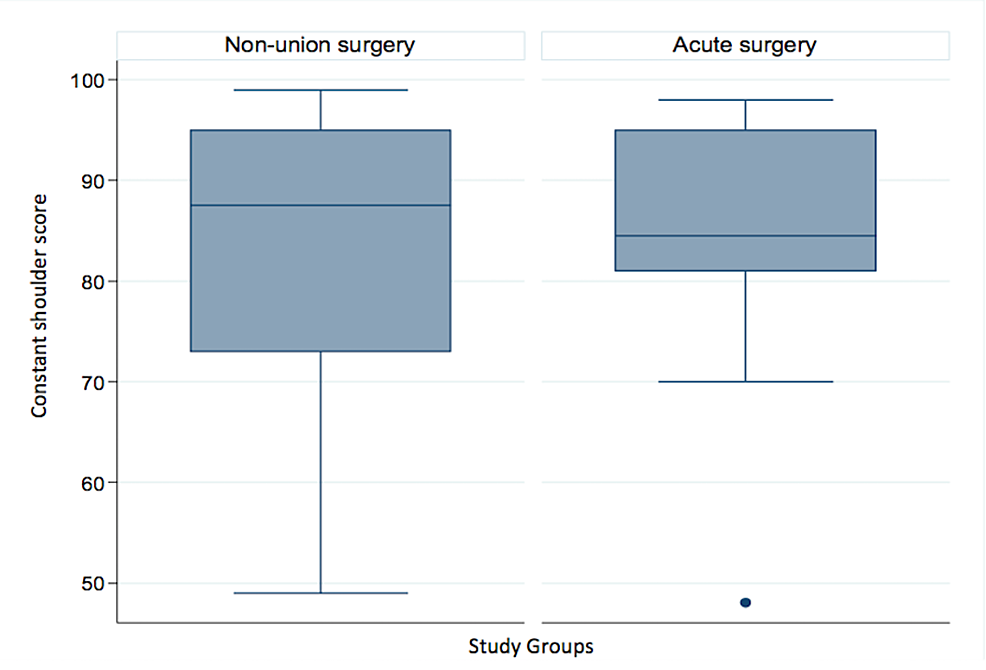 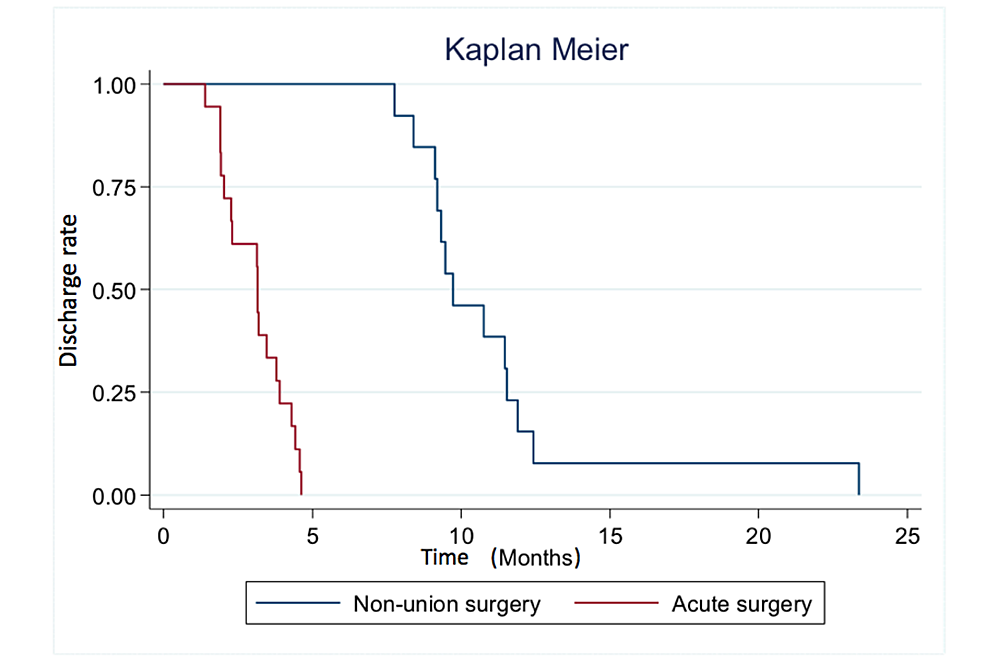 One hundred percent of those patients who were initially treated with surgery had bone union on CT scan without other treatment. However, two out of 14 cases required a second surgery with a plate and bone graft to achieve bone union. Both achieved bone union during follow-up after a second surgery. A CT scan of bone unions can be seen in Figure 4. 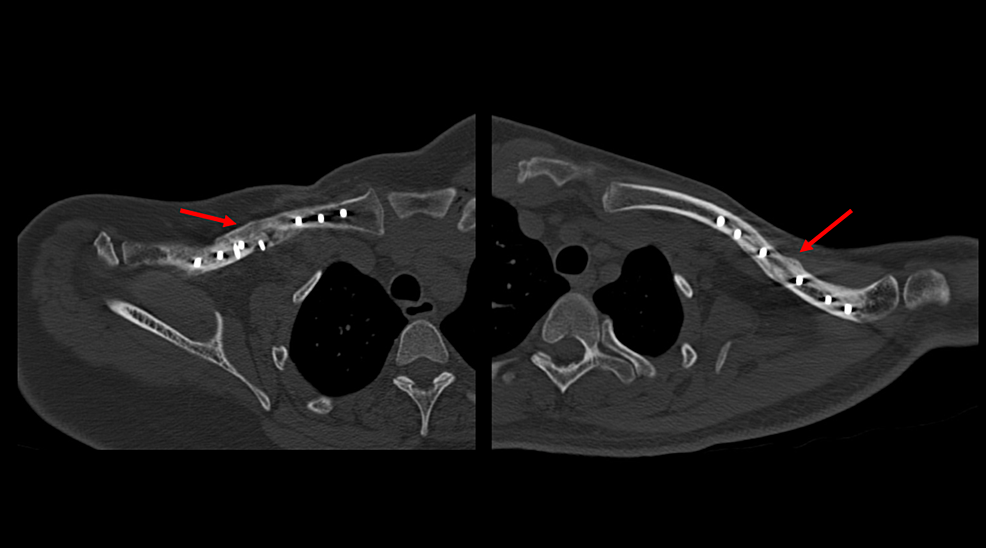 One patient in the acute surgical treatment group required a second surgery to remove a symptomatic plate. Both groups did not develop complications as superficial or deep infections, wound dehiscence, neurological deficits, or vascular injuries.

Mckee et al. reported, in a group of 30 patients with a displaced midshaft clavicle fracture with nonoperative treatment, less strength (67% vs. 82% of the contralateral shoulder) and an average Constant score of 71 with a Disabilities of the Arm, Shoulder, and Hand (DASH) score of 24.6, showing a functional deficit in these patients [16].

Symptoms from a displaced non-union midshaft clavicular fracture are due mainly to related pain from non-union problems but also from dysfunctional deficits that may result from displacement and shortening. It has been previously described that the functional impairment of these last few factors may be corrected with a later surgery [17].

In our results, Constant scores were similar at the end of the patients’ follow-up between those treated with surgery in the acute setting and those operated on later with a non-union (84.5 vs. 87.5, p = >0.05). However, surgical treatment in the non-union group showed a Constant score with wide dispersion. This prompted us to think that positive results might be less predictable than displaced midshaft clavicular fractures with surgical treatment in the acute setting.

These results differed from those reported by Potter et al. [18], with a statistically significant difference in the Constant score in favor of acute surgery (95 vs. 89 p = 0.02). Conversely, the median difference of 6 points may be clinically irrelevant [19-21]. They did not find any difference in the DASH score, patient satisfaction, or absolute strength. However, the non-union surgical treatment group had lower resistance strength at the end of the follow-up.

There was a significant difference in the median time to discharge to return to work between our study group (9.7 months) and the control group (3.2 months). This may be of interest in a workers’ compensation population under labor insurance coverage and should be included in any cost-effective analysis. All patients with acute surgery were discharged for return to work before five months; however, our non-union surgery group required at least seven months from the initial trauma. A similar trend was observed in a group of 11 patients who went through a non-union surgery, where it took them more time to return to functional activities than patients surgically treated in the acute setting, but a similar single assessment numerical evaluation (SANE) score between both groups was finally obtained at the one-year follow-up [22].

In this case-controlled study, the non-union surgical group’s functional results were like previously published results in an acute surgery setting, even though our study included patients with labor compensation [3-5,23].

This study is limited by the retrospective analysis of the non-union surgical group. Also, the small numbers of both groups and a 1:1 matching process limited the statistical analysis. Both groups did not match on gender and were not matched in other factors that may contribute to results as smoking status, although these factors have only been identified as risk factors for non-union in displaced middle-third clavicle fractures treated conservatively. The strength is the median follow-up of the non-union surgically treated group, being the longest one reported with functional results in the literature.

More prognostic studies about clavicle fracture non-union surgery are needed to advise patients whether surgical treatment is recommended for their fracture in the acute setting and what to expect if they need surgery for a non-union. Ideally, they should be high-quality prospective cohort studies, with patients enrolled at the same time point in the disease.

Human subjects: Consent was obtained by all participants in this study. Scientific Ethics Committee Hospital del Trabajador issued approval N/A. April 27, 2015
The ethics committee of Hospital del Trabajador (Santiago, Chile), took knowledge and ruled that this research does not raise objections of ethical nature. It was signed by Dr. Octavio Reyes (Hospital Director) and Dr. René Muga (ethics committee president).
Authors have a printed certificate. Animal subjects: All authors have confirmed that this study did not involve animal subjects or tissue. Conflicts of interest: In compliance with the ICMJE uniform disclosure form, all authors declare the following: Payment/services info: All authors have declared that no financial support was received from any organization for the submitted work. Financial relationships: All authors have declared that they have no financial relationships at present or within the previous three years with any organizations that might have an interest in the submitted work. Other relationships: All authors have declared that there are no other relationships or activities that could appear to have influenced the submitted work.

© Copyright 2019
Marsalli et al. This is an open access article distributed under the terms of the Creative Commons Attribution License CC-BY 3.0., which permits unrestricted use, distribution, and reproduction in any medium, provided the original author and source are credited.