A 55-year-old woman was referred to our general surgery clinic for evaluation of chronic epigastric postprandial pain. Her symptoms also included nausea, vomiting, and diarrhea, with intermittent episodes of bloody bowel movements. These symptoms have been going on for several years. She had about 84 pounds (lbs) weight loss due to her inability to tolerate oral intake. She was occasionally using analgesic medications that only temporarily alleviated her abdominal pain. Personal history revealed that she had Raynaud's disease and chronic fatigue syndrome. Her home medications included baby aspirin, multivitamin, and over-the-counter Tylenol.

Her physical examination along with laboratory blood tests and stool studies were unremarkable. Abdominal ultrasonography, esophagogastroduodenoscopy, and colonoscopy were unremarkable. However, computed tomography (CT) scan of the abdomen and pelvis revealed severe compression of the proximal celiac axis, near its origin, with stenosis, and post-stenotic dilatation, concerning for median arcuate ligament compression (Figure 1). 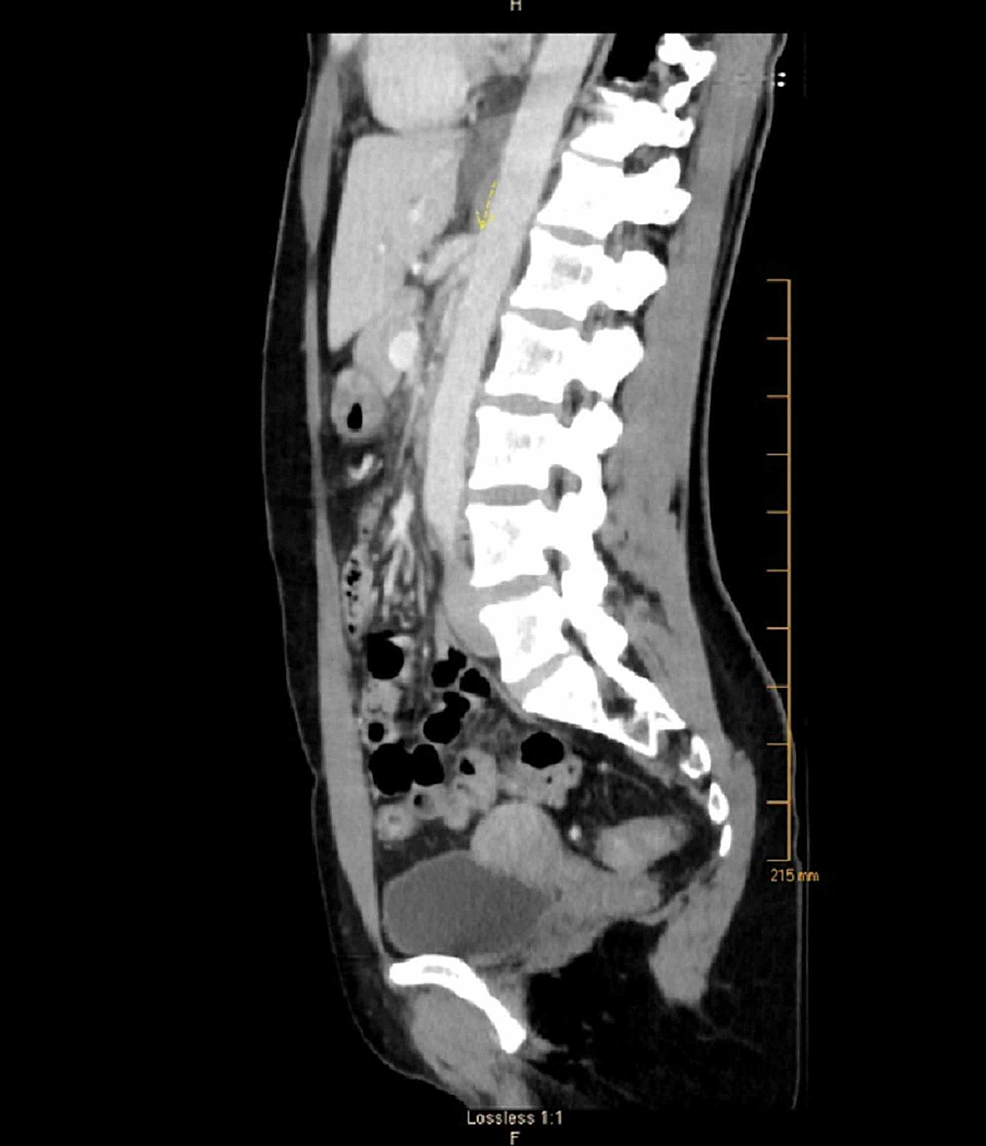 After adequate preoperative assessment, laparoscopic adhesiolysis with transection of the median arcuate ligament was performed (Figure 2). Postoperatively, the patient was without complications, her postprandial abdominal pain was resolved, and she tolerated oral intake without nausea or vomiting. She was discharged home on postoperative day two. Eight weeks after discharge, at the time of this report, the patient continued to do well, tolerated regular diet without postprandial pain, and she is having formed bowel movements. 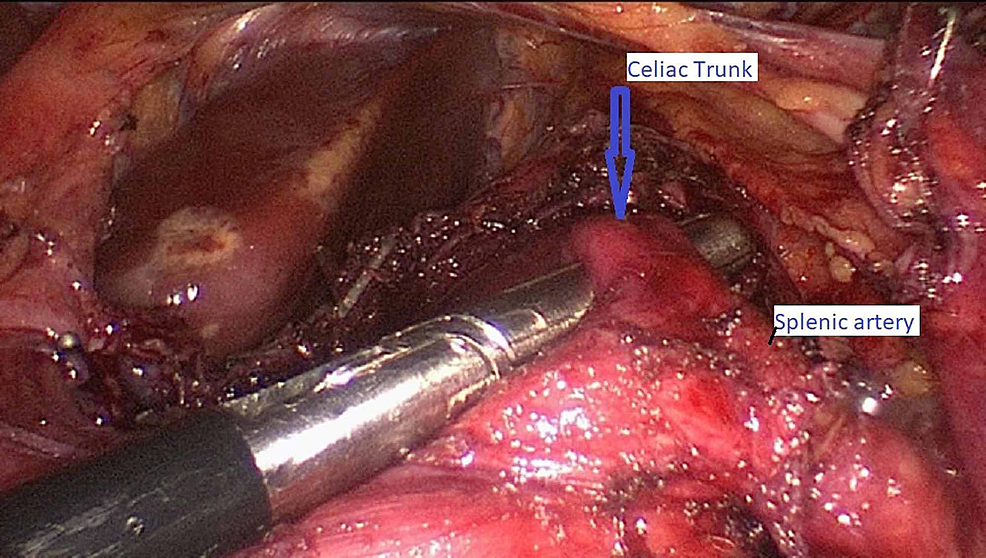 Several theories have been proposed on the pathophysiologic mechanism of celiac artery compression syndrome. A commonly accepted theory suggests that increased demand for blood flow, through a compressed celiac artery, leads to foregut ischemia and results in the development of epigastric pain [1]. However, the development of collateral vessels helps prevent the development of ischemia. A second hypothesis is that the pain associated with median arcuate ligament syndrome has a neuropathic component, resulting from a combination of chronic compression, and overstimulation of the celiac ganglion. This, in turn, results in the direct irritation of sympathetic pain fibers and/or splanchnic vasoconstriction and ischemia [1].

The diagnosis is made by excluding other likely causes of postprandial epigastric abdominal pain, such as gastritis, gastric ulcer disease, symptomatic gallstones, or pancreatitis. Imaging modalities that can assist in the diagnosis include computed tomographic angiography, Doppler ultrasound, with the possible addition of other studies such as mesenteric duplex ultrasonography, magnetic resonance angiography, gastric tonometry, and mesenteric arteriography [5].

The management of celiac artery compression syndrome is aimed at relieving the compression of the celiac artery to restore adequate blood flow through the vessel and neurolysis to address the chronic abdominal pain [1].

Open surgical decompression is one approach to treating celiac artery compression syndrome. It involves an open midline laparotomy to access and decompress the median arcuate ligament and the diaphragmatic crura away from the celiac artery. The diaphragmatic fibers are incised to expose the aorta. The diagnosis can be confirmed intraoperatively, by visual inspection, and duplex ultrasonography demonstrating a return to normal peak systolic velocities. Neurolysis and wide excision of the involved celiac plexus are also recommended for addressing the neuropathic component of the chronic compression [1].

A third approach, in the surgical management of celiac artery compression syndrome, is the robotic-assisted technique. The benefits of this technique include optic enhancement (increased magnification of structures, three-dimensional view), and operator-based improvement (tremor elimination, added degree of motion, and scaled operator movements). The limitations include longer operating time, additional training for the surgeon, and increased cost [1,5].

Of note, endovascular intervention-arteriography and percutaneous transluminal angioplasty, although not a successful first-line therapy in the treatment of celiac artery compression syndrome, with the addition of a balloon-expandable stent does serve as an adjunct in the management of patients with residual symptoms, and/or stenosis after an operative intervention [1].

Celiac artery compression syndrome is an uncommon cause of postprandial abdominal pain. It is a diagnosis of exclusion. Management is aimed at relieving the compression of the celiac artery and neurolysis, and this can be achieved with either an open, laparoscopic, or robotic-assisted technique.

© Copyright 2019
Ologun et al. This is an open access article distributed under the terms of the Creative Commons Attribution License CC-BY 3.0., which permits unrestricted use, distribution, and reproduction in any medium, provided the original author and source are credited.

Role of Using Nonsteroidal Anti-Inflammatory Drugs in Chemoprevention of Col ...