Introduction: Use of web-based messaging applications to communicate clinical information is common between non-consultant hospital doctors (NCHDs). This study sought to assess web-based messenger use in NCHDs following the introduction of a more secure alternative to WhatsApp (WhatsApp, Inc., Menlo Park, CA, USA).

Discussion: WhatsApp use is common among NCHDs. An alternative means of communication can improve the safety of patient data. NCHDs require more training on data protection laws and their own responsibilities.

Hospital communication infrastructure relies on pager-based systems allowing doctors to communicate with colleagues via phone calls on receiving bleeps. Drawbacks of these traditional pager-based systems have been highlighted in the literature, including delayed communication in an emergency situation, inefficiency in terms of physician and nursing time, and the asynchronous one-way transmission of information [7]. Physicians can spend up to 20% of their allocated working time answering paging requests.

The Health Service Executive (HSE) offers little clear guidance or clarification on the appropriate use of web-based messenger apps for communication in a clinical setting. Current policies on social media usage and electronic communication do not offer guidance to staff communicating via messaging applications [8-9]. Minimal training is provided to NCHDs on patient data protection laws or appropriate conduct using these types of applications. Studies demonstrating the widespread use of WhatsApp (WhatsApp, Inc., Menlo Park, CA, USA) [10] are reflective of NCHDs in Ireland and the United Kingdom who are faced with the problem of needing to rapidly communicate large volumes of information to colleagues on a regular basis with restrictive hospital guidance on available strategies. The National Health Service (NHS) has recently changed its policies regarding the use of web-based messaging applications to provide clinicians with guidance on correct usage in the clinical setting [11]. These guidelines give clinicians advice on optimal usage practices and offer information on available third-party applications, recognising the requirement for mobile messaging in a clinical setting.

Ownership of this data sent through smartphones is not transparent, and there are issues surrounding the consent process for data use [12]. Sending data via applications, such as WhatsApp, can result in serious data breaches. The risk that people could be inappropriately added to groups containing sensitive patient information may be high, especially without a clear authorization process on accessing the application.

There is an evident need to separate work and social domains for NCHDs and placing work information in the same application as social information can contribute to miscommunication among NCHDs. The differing requirements of a hospital-appropriate, web-based messaging tool necessitate an alternative to the currently available applications for appropriate use of patient information.

This study sought to assess behaviour regarding sensitive patient information among NCHDs and to assess the effects of a hospital-approved application on these behaviours. A cross-sectional study of two groups of intern-level NCHDs was conducted in May 2018 and August 2018. NCHDs were surveyed over a one-week period and surveys were returned within two weeks. They were approached in person and given a copy of the survey by a gatekeeper who had no involvement with the study. Written informed consent was obtained from each participant. Consent forms were retained separate to the surveys and each survey was pseudonymised with a unique identifier. Group 1 was a cohort of interns had received no formal training on data protection responsibilities and had not been introduced to any approved application for communication of patient information.

Group 2 was a similar cohort of interns. These were given a brief talk on the importance of information governance and how new data protection legislation could affect them. The intern network coordinator, with the intention of preventing data breaches, gave this talk. The hospital had introduced Medxnote (Medxnote Ltd., Dublin, Ireland) as a secure web-based messaging application intended for communication of de-identified patient information. Teaching sessions were provided to ensure the NCHDs were capable of using the application. Each teaching session lasted approximately 30 minutes in duration and was provided by the application designer. One teaching session was deemed to be sufficient for most people using the app. The second group was surveyed following two months of working with access to the novel application and training. Technical support was offered during daytime hours in the event of difficulties in using the app.

Among the first cohort of interns prior to the General Data Protection Regulation (GDPR) and prior to formal training in data protection responsibilities or any hospital-approved web messenger, the survey response rate was 33/54 (61%). Three surveys were filled out incorrectly and so only 30 were analyzed.

All respondents (n = 30) had smartphones. Password protection on smartphones was reported by the vast majority of respondents (97%, n = 29). Notably, all respondents (100%, n = 30) indicated that WhatsApp was the primary method of communication amongst their hospital team.

The second cohort response rate was 35/54 (65%) with four surveys answered incorrectly and deemed unsuitable for analysis, leaving 31/54 (57%) available for data analysis. The second group were all required to download the approved application to receive communications relating to announcements about teaching, training, and management. Figure 1 compares the specialties of each group of respondents. 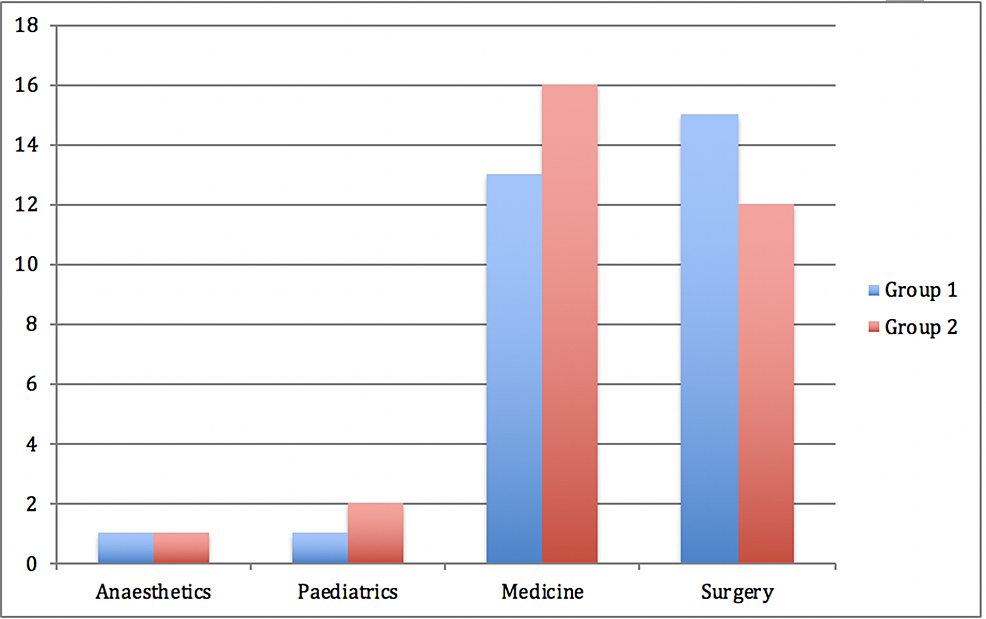 Of the second group surveyed, 13/31 (42%) had attended the available teaching relating to the use of the approved application and GDPR.

Similar to the first cohort, all respondents (n = 31) surveyed had smartphones. The majority of respondents (94%, n = 29) had password protection on their phones. When asked about messaging application use, 19 respondents (61%) said that they sent or received clinical information, including patient identifiers, on a daily basis, whilst 19% (n = 6) reported this occurring on a weekly basis and 13% (n = 4) on a monthly basis. A total of five respondents (16%) reported neither sending nor receiving clinical information to colleagues via a messaging application. 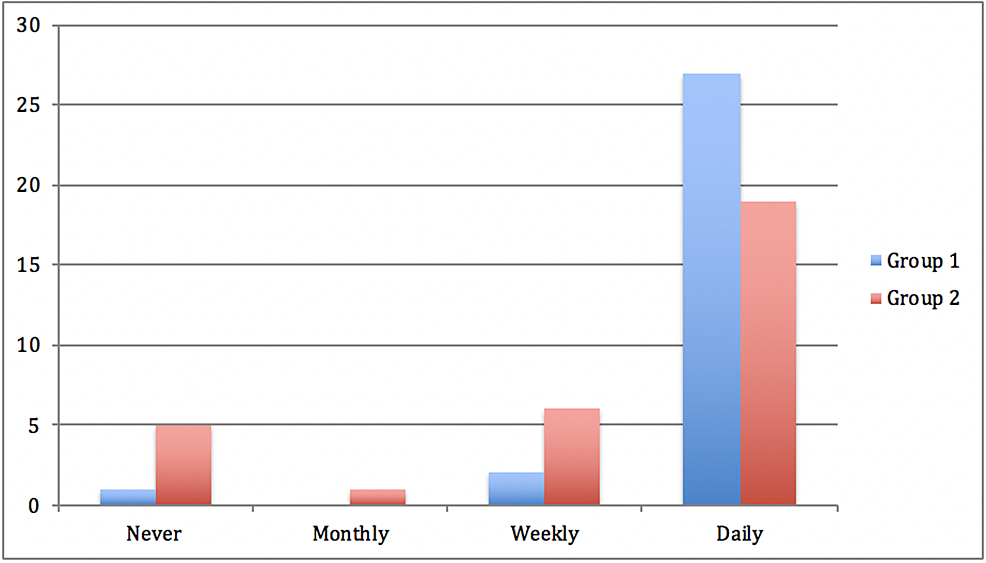 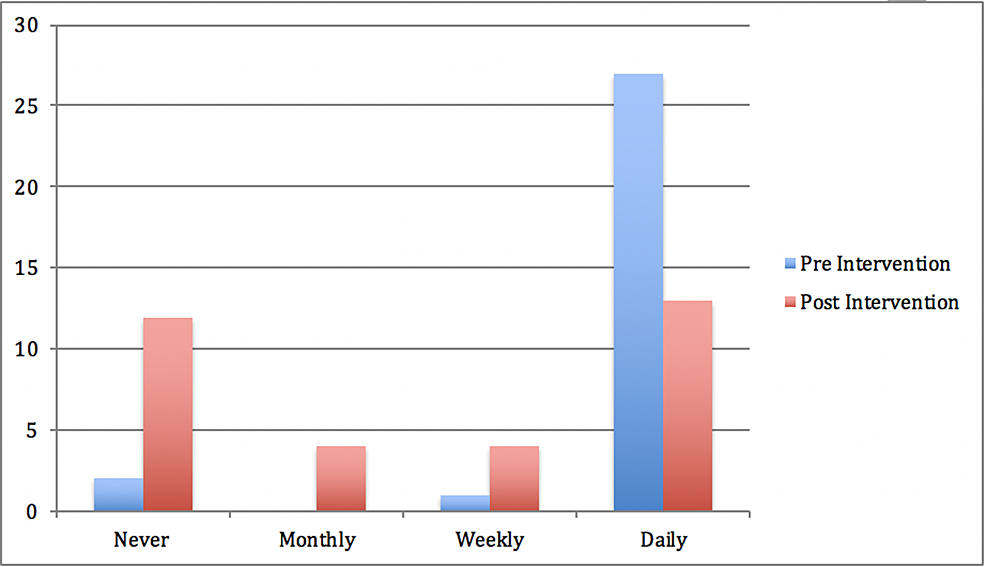 Statistical analysis was conducted using the SPSS software with the Chi-squared test employed to compare groups with a statistical significance  threshold set at p < .05. Table 1 compares the results of the survey questionnaire between both groups.

These differences may be due to the new training and teaching available to the NCHDs. The presence of an application which is exclusively for professional communication in this group improved behaviours surrounding the use of patient information. Differences could also have been influenced by increasing awareness of the General Data Protection Regulation. Increased emphasis on appropriate usage of applications by hospitals reminds clinicians to maintain high standards in using sensitive patient information.

Further advances in mobile communication technology, along with national policies, will determine the future of web-based communications in hospitals. Broader research questions could examine the multitude of uses of web-based messenger applications and the different features of these applications. Factors which could have impacted on participants’ behaviour include training, the availability of the app, and the introduction of the GDPR.

Governing bodies at a local and national level can help improve information governance among NCHDs. Clinicians often come up with their own solutions to communicate clinical information, which can result in data breaches. Policies can recognise that usage of web-based messaging systems is sometimes necessary in the clinical setting and this usage can be regulated. Alternatives to pager-based systems can make hospital communication more efficient and can be used in a safe manner that is compliant with GDPR.

Our results show that third-party web-based messenger applications are in widespread use in the clinical setting. Providing NCHDs with training on GDPR and an approved web-based messenger application has resulted in an improvement in the behaviour surrounding the sharing of sensitive patient information. Our study demonstrated a significant improvement in compliance with new standards of data protection following training and standardization of communication modes. Training and the appropriate software can help hospitals to comply with regulations and protect patients' data. Junior doctors are now more cognizant of their data protection responsibilities and the issues with current practices.

© Copyright 2019
Corbett et al. This is an open access article distributed under the terms of the Creative Commons Attribution License CC-BY 3.0., which permits unrestricted use, distribution, and reproduction in any medium, provided the original author and source are credited.

Initial Evaluation by a Non-Surgeon Provider Does Not Delay the Surgical Car ...