A 35-year-old male, a horse trainer, was brought to the emergency room after being kicked in the abdomen, which resulted in an abdominal wall hematoma and a blow-out rupture of the proximal jejunum, with a mesenteric tear and posterior lumbar disc herniation. The initial evaluation did not raise significant concerns; however, the patient's abdominal pain progressively worsened after the administration of oral contrast in preparation for the computed tomography (CT) scan. The patient did well after abdominal exploration and operative repair of the small bowel injury. Our objective is to shed light on this mechanism of injury that can be underestimated during a patient's initial evaluation.

A 35-year-old male horse trainer was brought to our emergency room after being kicked by a horse and complaining of left-sided abdominal pain, mainly at the hoof imprint site. The patient was hemodynamically stable, with a tender left lower abdomen at the site of the hoof mark (Figure 1 ). His pain worsened shortly after drinking oral contrast. 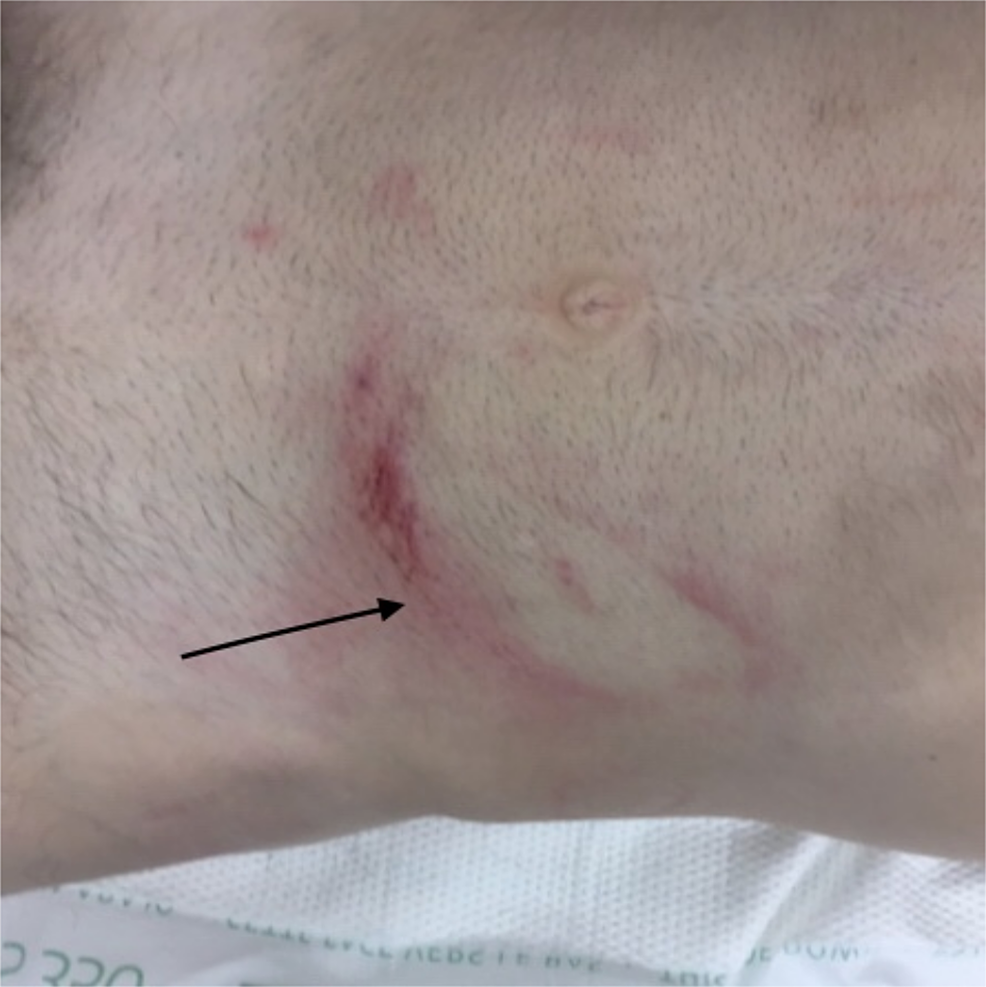 On arrival, focused assessment with sonography for trauma was negative and a computed tomography (CT) scan of the abdomen and pelvis with oral, rectal, and intravenous contrast revealed extensive extravasation of bowel contrast (Figure 2) and posterior lumbar disc herniation. 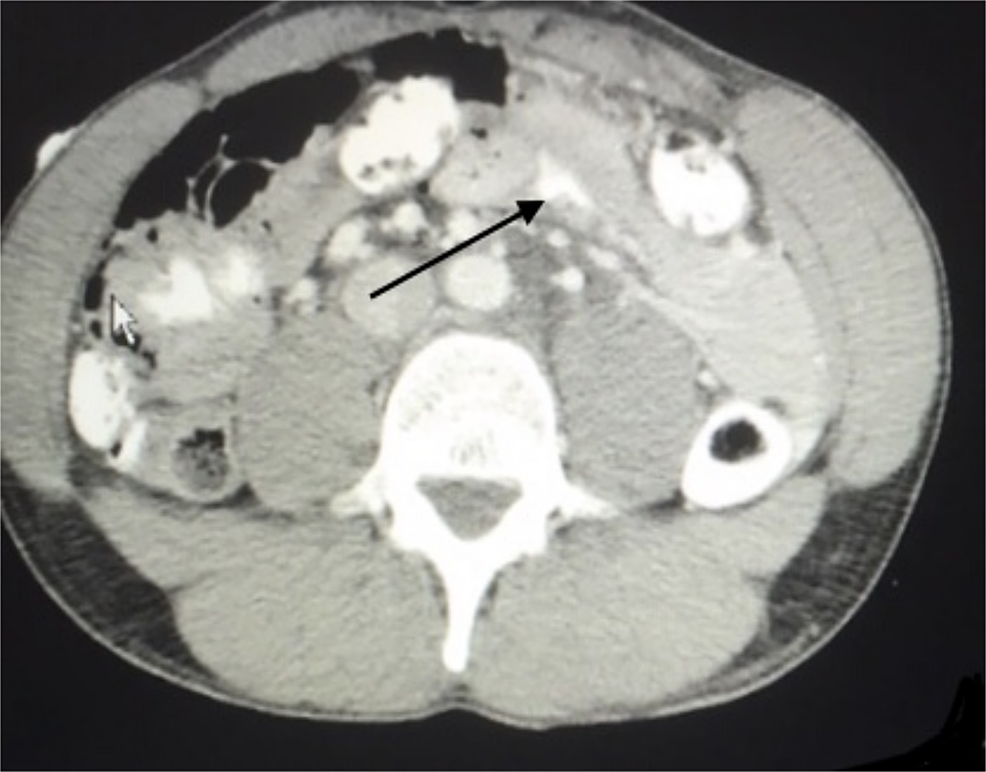 The patient was taken to the operating room and an abdominal exploration was performed. A blow-out rupture of the proximal jejunum, a mesentery tear, and a stable rectus sheet hematoma were found (Figure 3). 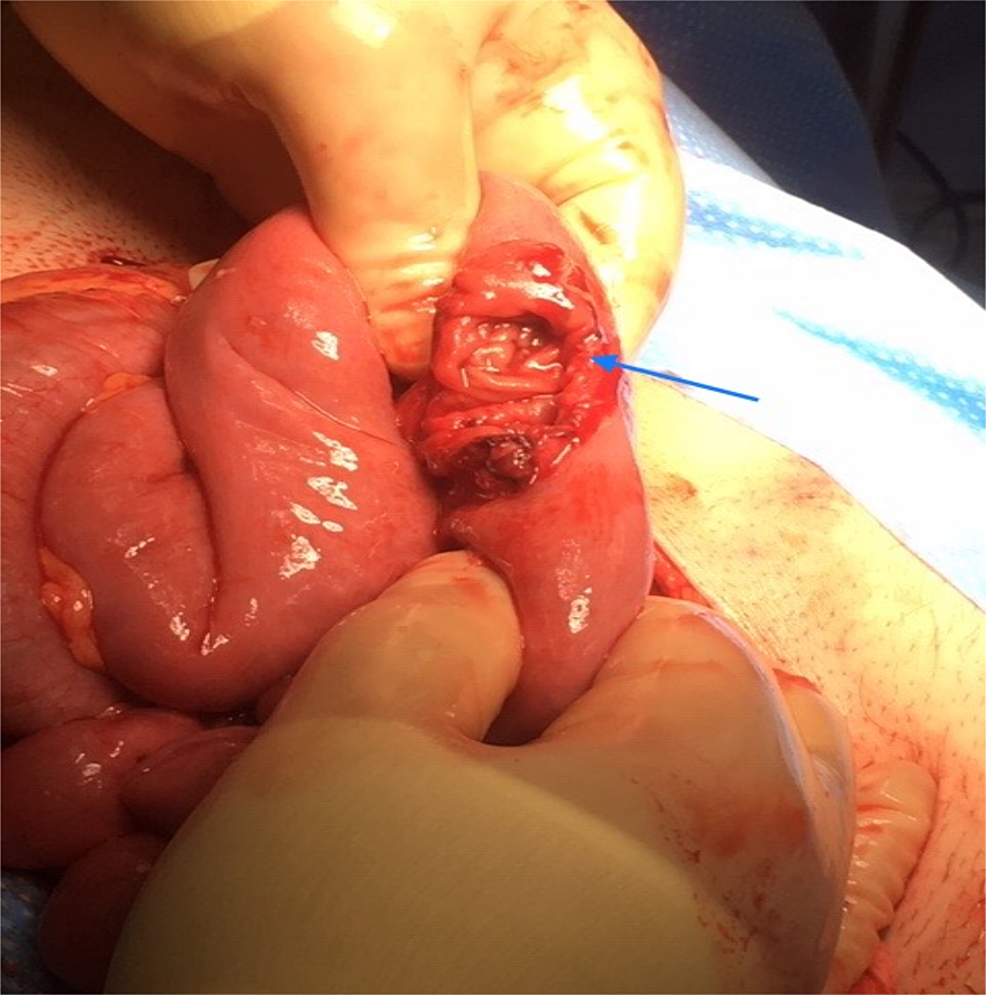 The small bowel perforation was repaired and wash-out performed. Magnetic resonance imaging (MRI) of the lumbar spine revealed multilevel disc protrusions most significant at L4-5 (Figure 4). No operative management was recommended by neurosurgery. 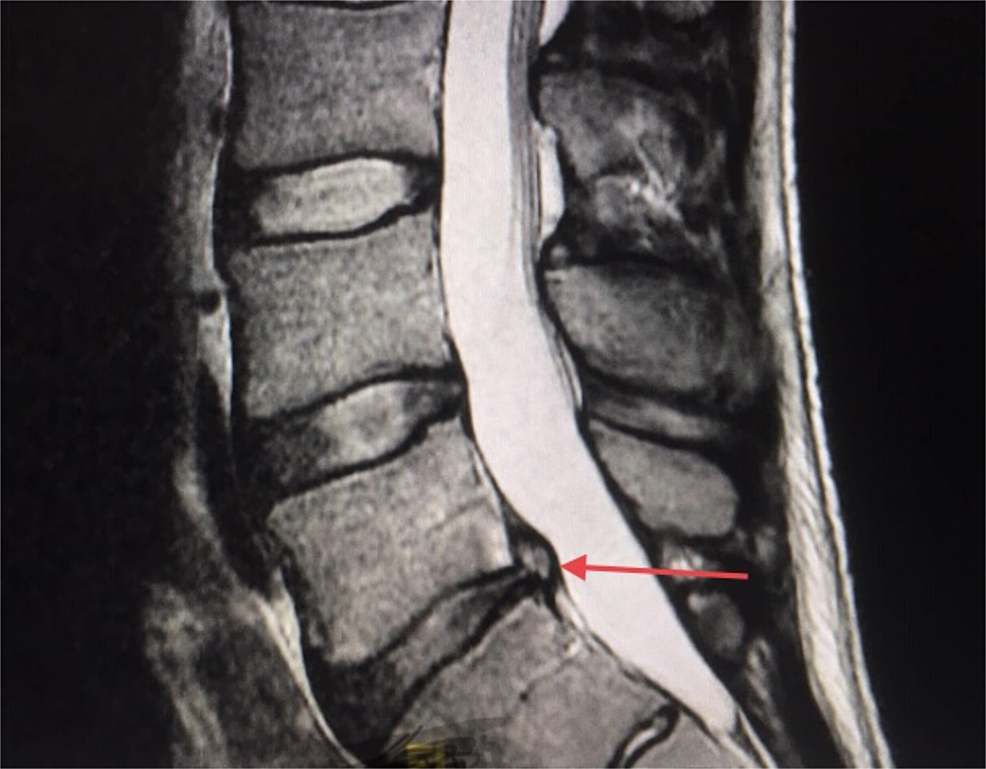 The patient did well and was discharged from the hospital on the third postoperative day.

The ancient Arabic proverb "The grave yawns for the horseman" describes the possible lethal power of a horse, which is capable of delivering a kick with a force of up to one ton [5]. The mechanism of injury includes a fall from a running horse, a kick, a bite, or being dragged [6]. In the largest series reported by Carmichael et al., most injuries occurred due to falling off while riding (54%) or sustaining a kick from the horse (22%), resulting in extremity fractures (33%) and head injury (27%) [7]. Extremity injuries are the most common horseback riding-related injuries (upper more than lower) and the head is the most frequent site of injury when kicked by a horse [8-9]. Cardiac injury in the form of myocardial infarction [10], traumatic tricuspid regurgitation, right-to-left intra-atrial shunt, persistent complete heart block [11], and cardiac tamponade following a horse kick have been reported [12]. Injuries are usually recognized early, however, delayed diagnoses of cardiac tamponade and retroperitoneal rupture of the duodenum have also been reported [13-14]. The transfer of energy from the end of the hoof to a small field leads to internal injuries that are more severe than predicted, similar to a handlebar injury [15].

A horse kick delivers significant force to a small surface area, which should never be underestimated even in patients whose initial exam raises no concerns. Internal organ injuries may not be apparent at initial evaluation and early CT imaging is advised. Other associated injuries should not be overlooked and, in our case, a posterior disc herniation was clearly defined with the use of MRI.