Percutaneous endoscopic gastrostomy (PEG) feeding is a common and widely performed procedure appropriate for long-term enteral nutrition in patients with multiple indications. We present the case of a 59-year-old woman with a PEG tube placed owing to complication following thyroid surgery approximately 20 years ago, representing the most extended duration of PEG tube feeding without any significant complication for chronic mechanical dysphagia. This case highlights the importance of PEG feeding, where this route can be used indefinitely in an appropriate clinical setting without complications. Interestingly, self-replacement of PEG tube was performed by the patient herself whenever she noticed clogging up of tube while self-feeding.

Percutaneous endoscopic gastrostomy (PEG) tubes are placed for many conditions wherein a patient is unable to intake food orally. The PEG tube was first used in 1980, where an endoscope was used to place a feeding tube into a patient’s stomach [1]. PEG tube use provides more natural nutrition than parenteral feeding and is usually a safe procedure. The most important role of this tube is to provide a route for enteral feeding and hydration and to administer medication in patients who are a potential candidate for inadequate or absent oral intake. PEG feeding is not recommended for short-term use because the 30-day mortality after PEG placement is substantial [1,2]. A gastrostomy tube placed endoscopically is usually a better choice than surgical placement [3,4]. We describe a case of a patient using PEG tube feeding for almost 20 years with no complications.

A 59-year-old woman with a past medical history of chronic dysphagia following PEG tube replacement due to thyroid surgery complications approximately 20 years ago presented to the clinic for the establishment of primary care and evaluation for chronic dysphagia as she wished to eat food naturally. She recently moved from Jamaica, where the PEG tube was initially placed soon after the thyroid surgery. Since then, she reported that she has been on PEG tube feeding due to the inability to resume oral feeding. Interestingly, she reported replacing the PEG tube herself through the original track whenever she experienced a tube clog. She reported chewing her food, then pushing it through the tube with a syringe. On examination, we noted a well-healed scar at the base of her neck. The PEG tube was located at the left upper abdomen with no signs of inflammation or drainage at the peristomal area (Figure 1). 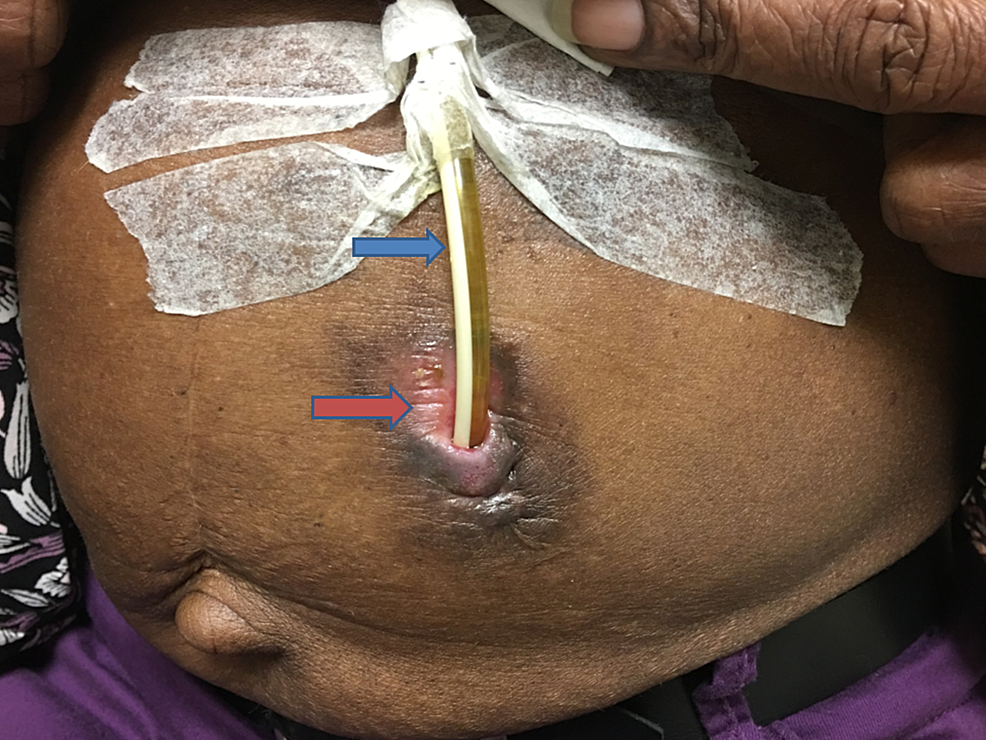 We also noted a laparotomy scar from a previous surgery for intestinal obstruction. The other physical examination findings were not remarkable. Her laboratory evaluations including complete blood count, chemistry panel, and lipid panel with normal findings; the viral serology for Hepatitis B and C were negative. Ultrasonography of the abdomen revealed no significant findings. Recent esophagogastroduodenoscopy revealed scarring in the hypopharynx as well as single diverticulum in the cricopharyngeus without further advancement of the scope (Figure 2). 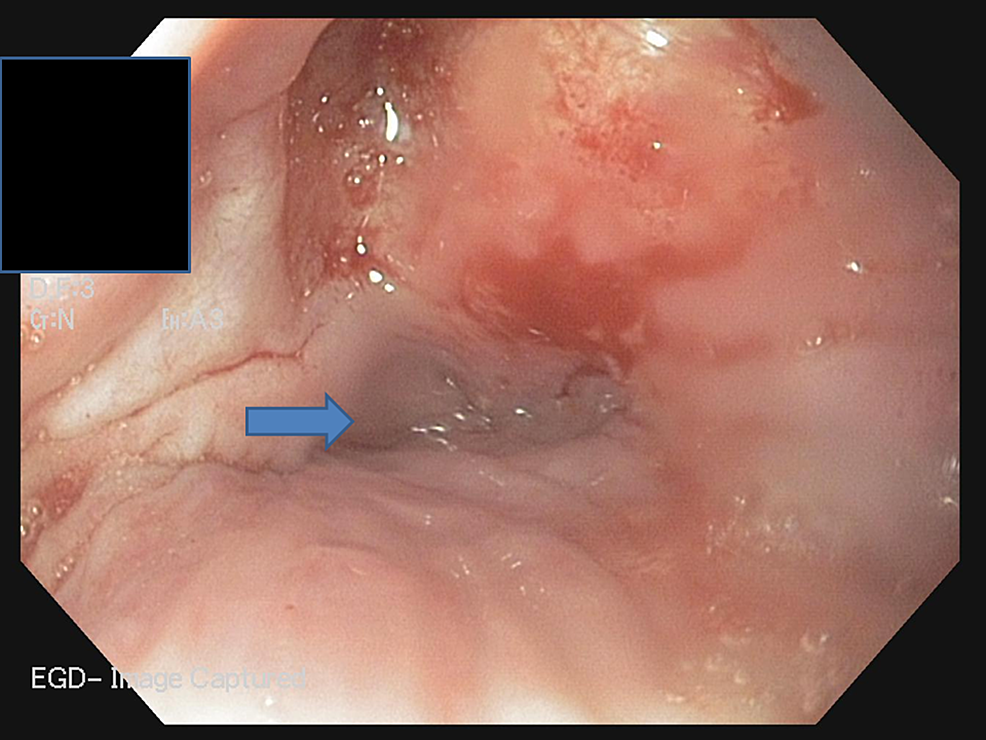 Figure 2: EGD showing scar present in the hypopharynx as well as single diverticulum (blue arrow) in the cricopharyngeus without further advancement of the scope.

Subsequently, a diatrizoate swallow study revealed the inability of the passage of contrast out of hypopharynx to the esophagus. She was ultimately counseled to depend on PEG feeding as she was maintaining her nutritional status with PEG feeding, and there were no better alternatives considering the potential worse consequences of surgery.

PEG feeding plays a significant role in the management of patients with poor voluntary oral intake, mechanical dysphagia, or neurological causes [5]. The two main goals for PEG placement are a viable route for feeding access and gastric decompression [6]. The patient should have normal or near-normal gastric and small bowel motility, which are vital prerequisites for PEG tube placement [7]. The beneficial effects of gastrostomy feeding on morbidity and mortality have been described only in specific subgroups of patients [8,9]. The average lifespan of PEG tubes has been reported to be one to two years and is based on tube degradation [10].

Several studies report that long-term survival rates are low (approximately 40% at 12 to 18 months, and 20% at three years) [3,8,13]. In the largest study, involving 80,000 patients with gastrostomy tubes, the majority of patients (75%) were older than age 75 [14]. The most common indications for tube placement were cerebrovascular disease, tumors, fluid and electrolyte disorders, and aspiration pneumonia. Survival rates at one year and three years were 37% and 19%, respectively, and the overall in-hospital mortality rate was 15%.

PEG tube placement has developed into a standard procedure to secure gastric access. Gastrostomy tubes can be placed endoscopically, surgically, and radiologically. There is significant variation in survival after PEG tube insertion. The vulnerable groups are elderly patients with co-morbid illnesses. Despite reports of high short-term survival and low long-term survival, this case presents evidence that PEG tube placement is not only safe but may be used for an indefinite period in patients with mechanical dysphagia without critical illness.

© Copyright 2019
Mandal et al. This is an open access article distributed under the terms of the Creative Commons Attribution License CC-BY 3.0., which permits unrestricted use, distribution, and reproduction in any medium, provided the original author and source are credited.

Figure 2: EGD showing scar present in the hypopharynx as well as single diverticulum (blue arrow) in the cricopharyngeus without further advancement of the scope.