The erector spinae plane (ESP) block is a recently defined regional anesthesia technique which is considered as an effective method in postoperative multimodal analgesia. ESP block is usually performed at the thoracic region in pediatric patients, but it is also possible to perform ESP block at the lumbar region. Femur fracture is one of the most common procedures especially in pediatric orthopedic surgery where postoperative pain management is essential. We aim to present a case of effective postoperative analgesia provided by ultrasound-guided lumbar ESP block in a 6-year-old patient after femur fixation surgery.

Erector spinae plane (ESP) block is a new regional anesthesia technique, which has been defined recently. This block provides analgesia by targeting the dorsal and ventral branches of the spinal nerves [3]. ESP blocks applied in the lumbar region have been previously reported for postoperative analgesia of lower extremity surgeries in adults [4-6]. In our case report, we present the implementation of ESP block in a pediatric patient, which provided excellent postoperative analgesia after femur fracture surgery.

A 6-year-old male (25 kg, 120 cm) was admitted to the emergency room with pain and restriction of movement in the right thigh after falling off the swing. After physical examination and X-ray imaging, a right femur shaft (medial zone) fracture was diagnosed. A fixation operation was planned and the patient was hospitalized in the Orthopedics and Traumatology Department. He had no co-morbid systemic disease, no history of allergy or anesthesia, but he had congenital one-kidney. The patient was assessed as ASA I according to American Society of Anesthesiologists (ASA) classification. General anesthesia was planned for the operation and a lumbar ESP block was planned for postoperative analgesia. Routine monitoring was applied to the patient including 3-channel electrocardiogram, noninvasive blood pressure, and pulse oximetry in the operation room; 20-gauge intravenous (IV) cannula was placed and dextrose 5% - NaCl 0.9% infusion (starting with 10 ml/kg, maintenance 5 ml/kg) was started. Midazolam 1 mg IV was administered for sedation and then routine general anesthesia protocol was applied. The internal fixation of femur lasted for two hours. A lateral incision was performed by the surgeons involving the dermatome levels L5. At the end of the operation, the patient was positioned in the left lateral for the ESP block. As the incision involved the dermatome level of L5, we preferred to make injection at the L5 vertebra level. After sterilization of the block area, a high-frequency linear probe (Mindray® Medical Electronics Co., Ltd. Shenzhen, China) was placed in paramedian sagittal orientation, 2 cm lateral to the midline at the L5 vertebrae level. The erector spinae muscle and the transverse process of the L5 vertebrae were visualized. A 22-gauge/5-cm block needle (Stimuplex®, Braun AG, Melsungen, Germany) was advanced cranial to caudal direction using in-plane technique and the local anesthetic solution was injected between the erector spinae muscle and the transverse process. A total of 20 ml bupivacaine 0.25% was used. Cranio caudal spread of the local anesthetic solution was visualized by ultrasound (Figure 1). 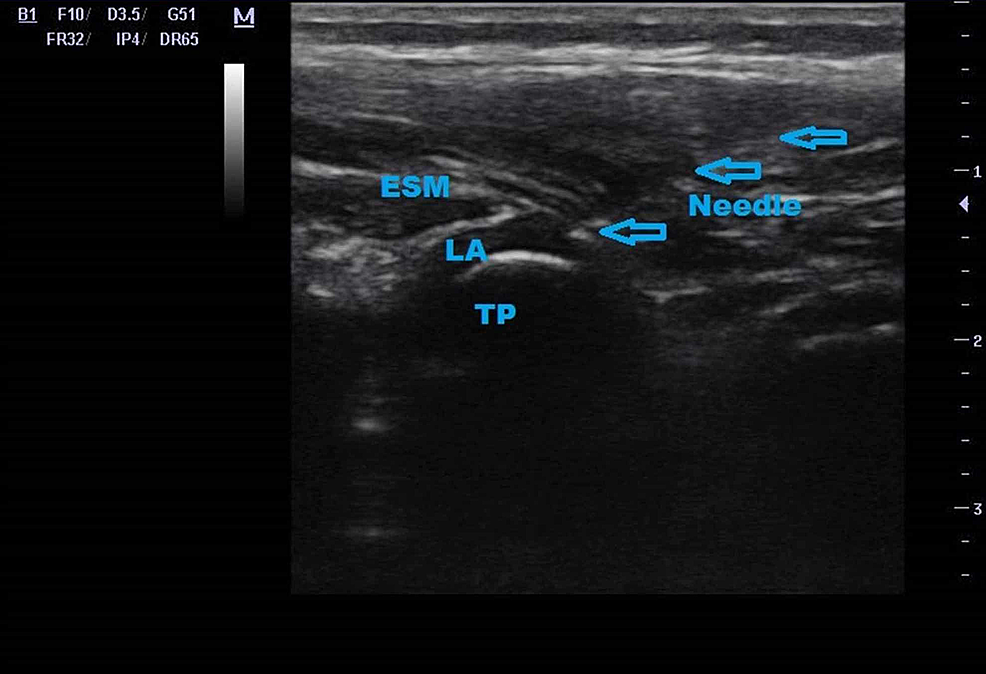 Acetaminophen 10 mg/kg was administered intravenously before the end of the operation. There were no complications during the procedure. Thereafter, the patient was extubated and admitted to the recovery room.

ESP block is a new regional anesthesia technique originally defined by Forero et al. for chronic thoracic pain management. This application provides the blockage of visceral and somatic nerve fibers by injecting the local anesthetic solution between the erector spinae muscle and the transverse process of the vertebrae [3]. Studies on cadavers have shown that injected local anesthesia for ESP block affects multiple dermatomes by spreading extensive cranio caudal vertebral levels. This is advantageous because it provides a wide blockage by single injection [9-10]. Lumbar ESP block was first used by Tulgar et al. for postoperative pain in an 86-year-old patient who underwent total hip arthroplasty at the L4 level [4]. Then ESP block was used in the literature for postoperative analgesia at L4 level for hip surgery, femoral surgery, and knee surgery [5-6]. Alici et al. performed single injection lumbar ESP block using a high volume for chronic pain in a patient with herpes zoster at lower extremity [11]. We have observed sufficient analgesia with a single injection of 20 ml of local anesthetic solution at the L5 vertebra level in our case. The intervention site is far away from structures such as major vascular vessels and nerve roots as so allowing the process to be performed safely.

According to a review by Tsui et al., there are many case reports in the literature while the clinical studies about ESP block are insufficient. Also, it was reported that ESP block was used in 90.9% of cases for multimodal analgesia [12].

When added to multimodal analgesia, single-injection lumbar ESP block provided effective postoperative analgesia after femur fracture surgery in our case. ESP blocks may be a feasible regional anesthesia method in the pediatric age group for analgesia in lower extremity surgery when performed at the lumbar vertebra level. Prospective controlled clinical studies should be performed to test its superiority to other regional anesthesia techniques.

© Copyright 2019
Balaban et al. This is an open access article distributed under the terms of the Creative Commons Attribution License CC-BY 3.0., which permits unrestricted use, distribution, and reproduction in any medium, provided the original author and source are credited.

Effects of Intraoperative Ketamine on Post-Operative Recovery in Obstructive ...