This study aimed to measure cervical regression during external beam radiation therapy (EBRT) and optimize the scheduling of brachytherapy concurrently with EBRT.

Fifty consecutive patients with carcinoma of the cervix stage IIA to IIIB received concurrent chemoradiotherapy with weekly Cisplatin 40 mg/m2. Cervical regression was evaluated using serial CT scans obtained before and during concurrent chemoradiotherapy (on the third, fourth, and fifth weeks). High dose rate brachytherapy was introduced after 30Gy of EBRT. A total of 25.5Gy in three fractions were delivered during the third, fourth, and fifth weeks of EBRT. Cervical volumes were recorded from the CT scan for cervical regression.

More than 50% of cervical regressions occur at the end of the third week (i.e., after delivery of 30Gy of EBRT), so it is optimal to introduce brachytherapy at the end of the third week. A conventional point-based plan can cover the high-risk clinical target volume (HRCTV) if the volume is <25cc, but an HRCTV >25cc may be well covered with optimization or a combination of intracavitary and interstitial brachytherapy.

Cancer of the cervix is the second most common cancer reported in the Indian female population [1]. Most cases are locally advanced, with nearly 70% in Fédération Internationale de Gynécologie et d’Obstétrique (FIGO) Stage IIB or Stage III. Curative radiation therapy in carcinoma of the cervix is usually a combination of external beam radiation therapy (EBRT) and brachytherapy. Over the years, the external beam radiotherapy for carcinoma of the cervix has been well standardized and uniform; however, the brachytherapy component carries tremendous variation. Often, brachytherapy is used as a boost after EBRT for locally advanced disease as it delivers a high radiation dose to the tumor and high-risk clinical target volume (HRCTV) while optimally sparing the surrounding normal tissue.

Various studies have shown that pelvic control and survival rate is compromised when treatment time lasts beyond eight weeks [2-5]. Perez et al. observed that if treatment time was prolonged beyond eight weeks, the failure rate was about 0.85% per day when the total dose delivered was ≥85Gy to point A [2]. The available literature on the involution of the cervix during chemoradiotherapy is very sparse. Lee et al. showed that chemo-radiation treatment of cervical cancer would rapidly involute the cervix [6]. The time taken for 50% tumor regression was 21 days and occurred after 30.8Gy.

These facts kindled interest in measuring cervical regression with the intent to optimize the use of brachytherapy insertions concurrently with EBRT. The total duration of treatment can be shortened to fewer than six weeks, thus, affording a chance for better local control. We used CT scans for contouring the HRCTV and measuring cervical regression, given that a high-volume center place makes getting a slot for MRI next to impossible. Also, standard Viswanathan et al. guidelines are available for HRCTV contouring based on CT images, which made CT-based contouring to measure cervical regression a logical choice [7].

Fifty consecutive patients with squamous cell carcinoma of the cervix in Stage IIA to IIIB (without the involvement of the lower third of the vagina) with healthy renal, hepatic parameters and Eastern Cooperative Oncology Group (ECOG) performance score of zero to two were included in the study. Patients with Stages IIIA, IVA, and IVB and patients unfit for high dose rate (HDR) brachytherapy after receiving 30Gy of EBRT were excluded and allowed to continue EBRT for 46Gy with midline shielding up to 50Gy. Brachytherapy was considered as per regular institution protocol (i.e., 8.5Gy to Point A x three fractions with one week between each fraction). The study patients received concurrent chemoradiotherapy with weekly cisplatin 40 mg/m2 up to a maximum of five cycles. EBRT was delivered by four-field box technique with corner shielding by multileaf collimator. A total dose of 50Gy/25 fractions with 2Gy per fraction per day was delivered by EBRT with midline shield after 46Gy of EBRT. Brachytherapy was delivered by three fractions of HDR intracavitary application (8.5Gy to Point A x three fractions). The first fraction of HDR brachytherapy was introduced after 30Gy of EBRT; the second and third applications were done seven days after the previous application. The study design is depicted in Figure 1. 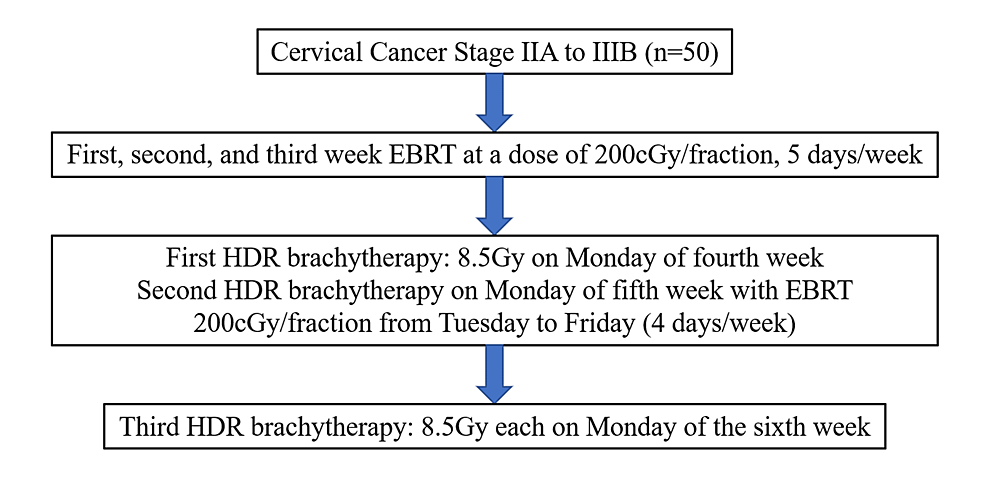 We used standard compatible applicators for an HDR Ir 192 brachytherapy machine, either Tandem and Ring or Tandem and Ovoid applicator depending on the depth of the fornices were used. The brachytherapy procedure was done as per standard institution protocol with patients under spinal anesthesia. A post-implant simulation CT scan was done; the volumes of organs-at-risk were visualized, and the bladder and rectum were delineated on each CT slice. Treatment planning was done using Brachyvision version 10 (Varian Medical Systems, Palo Alto, CA). The dose-volume histograms generated by the planning system were used for recording the volume doses for all relevant organs. Point doses were calculated using the International Commission of Radiation Units and Measurements reference points. We used the CT standardized contouring guidelines by Viswanathan et al. [7].

Patients were evaluated during concurrent chemoradiotherapy for assessment of cervical regression via serial CT scans obtained in the treatment position before and during the third, fourth, and fifth week of treatment. HRCTV was contoured on each CT scan slice, and volume was calculated and recorded in cubic centimeters (cc) using Eclipse software version 10 (Varian Medical Systems, USA). The serial volumes were analyzed for cervical regression, and V150, V200, D90, and D100 of the HRCTV were computed.

The patients’ characteristics are shown in Table 1. Fifty consecutive patients with Stage IIA to IIIB carcinoma of the uterine cervix treated with chemo-radiation formed the study group. The median age of the patient was 45 years (range, 30 to 60 years), and the mean age was 46 years (SD, 8.2). The mean tumor size was 84.5cc with a range of 28 to 221cc. Thirty-two percent of patients had a pretreatment ECOG performance status (PS) of 0, and 68% belonged to PS 1. Forty-four percent had Stage IIB, 32% had Stage IIIB, and 24% had Stage IIA disease at presentation. Most patients (84%) received four or more cycles of cisplatin, while 16% received three cycles of chemotherapy. 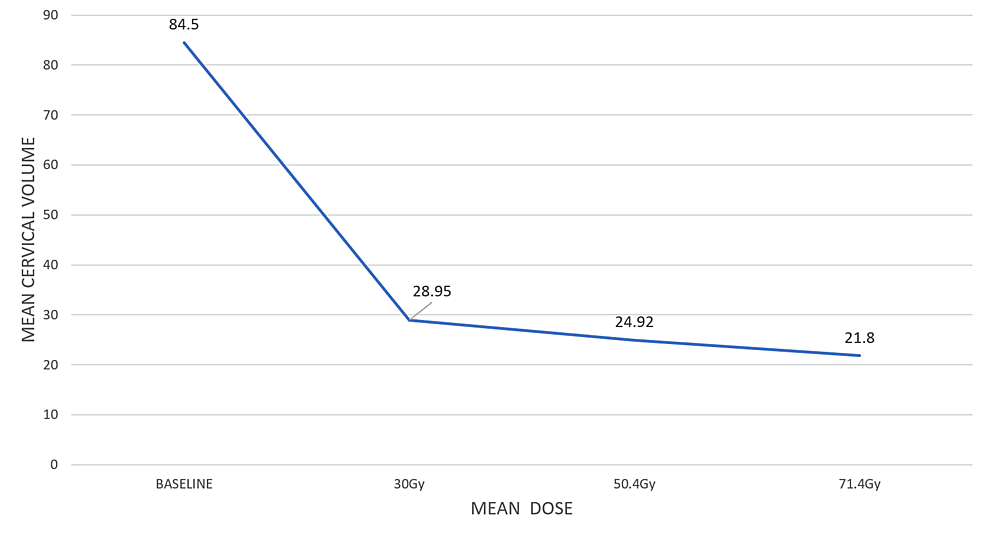 Figure 2: Mean cervical volume as a function of mean dose 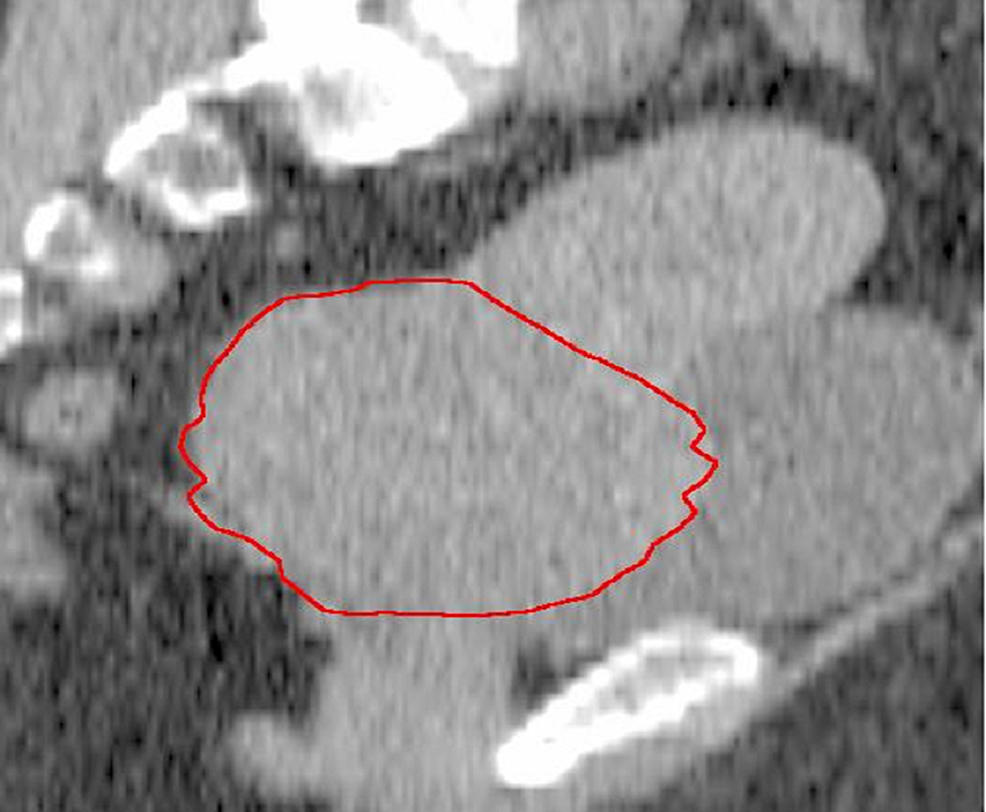 Figure 3: Cervical volume before the start of treatment 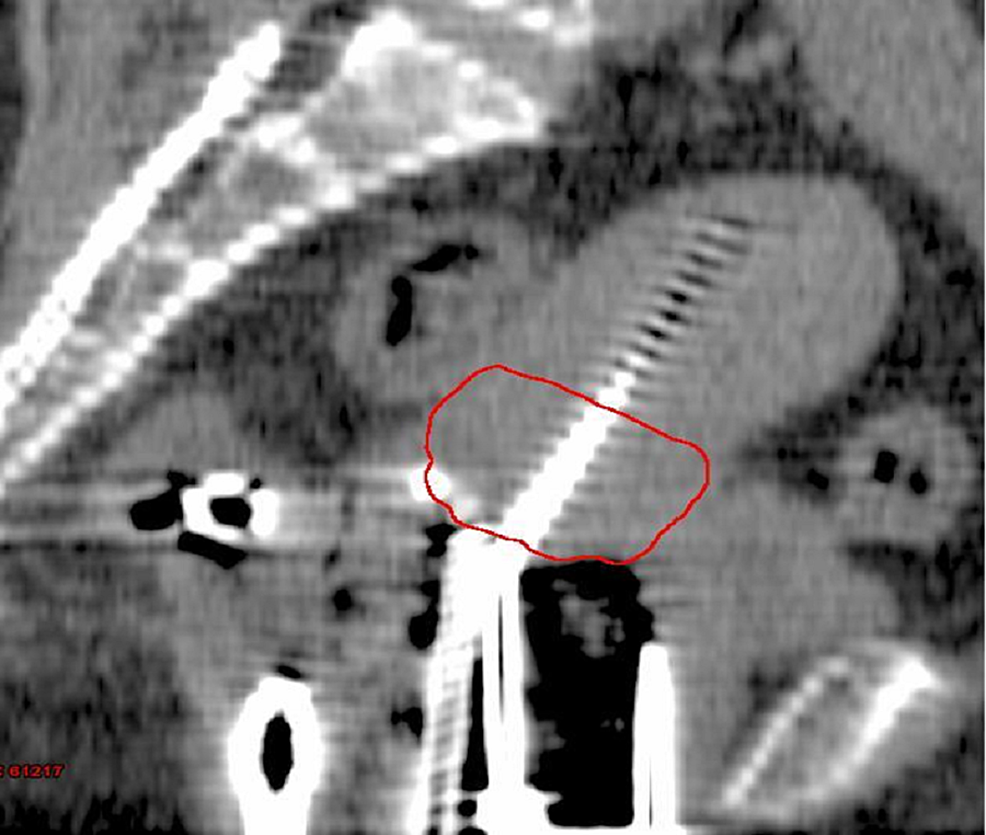 Figure 4: Cervical volume at the end of the third week of the same patient

Table 3: Mean doses to HRCTV at each brachytherapy 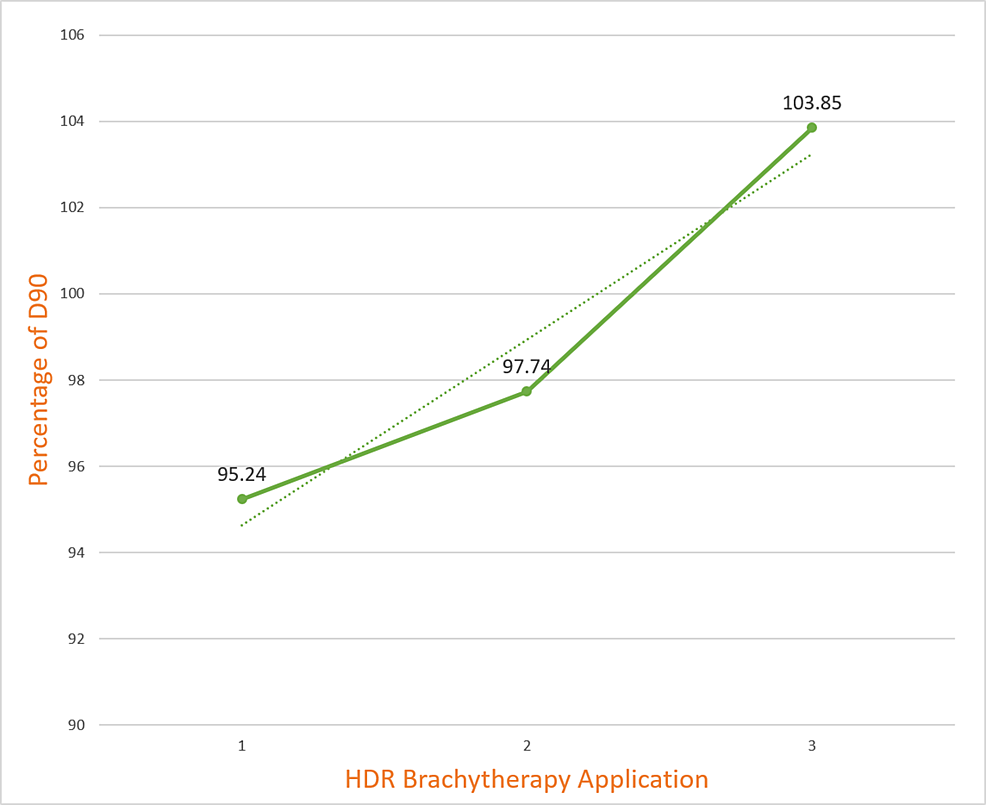 Logistic regression was performed to ascertain the effect of HRCTV on the plan acceptability (if a plan with D90≥100 is acceptable). The logistic regression model was statistically significant (chi-square value, 85.49; p<.0001). For every unit increase in the HRCTV, the odds of the treatment plan getting rejected (i.e., requiring optimization) was 1.34. Decreasing HRCTV was associated with an increased likelihood of plan having D90≥100. The cutoff for HRCTV to increase the plan acceptability (D90≥100) was found to be 25cc. Plans with HRCTV ≥25cc had significantly lower D90 values (79.7±14%) compared to plans with HRCTV ≤25cc (111±21%).

The radiation treatment for cancer of the cervix consists of both EBRT and brachytherapy. Multiple studies have shown that treatment time prolongation greater than eight weeks resulted in increased local failures and decreased overall survival. This study aimed to measure cervical regression and introduce the brachytherapy schedule concurrently with EBRT with the intent of decreasing the overall treatment to fewer than six weeks.

The baseline cervical volume was 84cc, and at the end of 45Gy, mean cervical volume reduction was 65% in our study. Unlike the observations of Van De Bunt et al., a strong positive correlation was identified between initial cervical volume and percentage of cervical regression which was statistically significant (r=0.744; P<.0001) [8]. These findings pave the way for interdigitating brachytherapy during EBRT; at the end of the third week (i.e., the completion of 30Gy) may be the most optimal time for the first brachytherapy application.

Tanderup et al. observed that plans with HR-CTV <31cc was well covered by point-based prescription in 94% of patients [12]. Optimization improved the HRCTV D90 in plans with HRCTV >31cc compared with point-based plans (72% vs. 25%).

Conventional Point A prescription was able to cover the HRCTV in most of the applications if the HRCTV <25cc. However, when HRCTV >25cc, conventional point A prescription would not be adequate to cover the HRCTV as shown in Figures 6, 7. The possible treatment options to improve dose coverage while sparing of healthy tissues are to continue EBRT up to 45 to 50Gy or until tumor regression occurs <25cc, but the duration of overall treatment cannot be reduced to fewer than six weeks. Thus, other options are found in image-based optimization or combined intracavitary-interstitial brachytherapy.

© Copyright 2019
Vedasoundaram et al. This is an open access article distributed under the terms of the Creative Commons Attribution License CC-BY 3.0., which permits unrestricted use, distribution, and reproduction in any medium, provided the original author and source are credited.

Figure 2: Mean cervical volume as a function of mean dose

Figure 3: Cervical volume before the start of treatment

Figure 4: Cervical volume at the end of the third week of the same patient

Table 3: Mean doses to HRCTV at each brachytherapy