BK virus is a member of the polyomavirus family. Primary BK virus infections occur early in childhood via oral or respiratory exposure [1]. Most primary infections are asymptomatic, or with mild symptoms. The virus can disseminate to kidneys and persists for lifelong [2, 3]. It is reported that up to 60-80% of the population contains a latent form of this virus [4].

BK virus can replicate even when the body undergoes immunosuppression. BK virus replication is associated with hemorrhagic cystitis in bone marrow transplant recipients, ureteral stenosis and interstitial nephritis in patients with renal transplant [5, 6].

We herein report a rare case of histologically-confirmed collapsing glomerulopathy associated with BK virus infection in the native kidneys of a patient with acute T cell leukemia/lymphoma syndrome.

A 69-year-old African-American female presented with one month of worsening bilateral lower extremity swelling/edema. She was non-oliguric upon arrival. Her past medical history was significant for adult T-cell leukemia/lymphoma, which was diagnosed two months prior to admission. She was initially treated with interferon alfa-2b and lamivudine, which were discontinued due to prolonged neutropenia. Then, she underwent two cycles of cyclophosphamide, doxorubicin, vincristine, and prednisone (CHOP) regimen chemotherapy, which was complicated by an episode of acute kidney injury that quickly resolved. She has a family history of hypertension.

On admission, her blood pressure was 135/78 mmHg. Physical examination was otherwise largely unremarkable except for bilateral lower extremities pitting edema up to the knees.

For further investigation, a kidney biopsy was performed, demonstrating collapsing glomerulopathy (Figure 1) and moderate to severe tubular necrosis (Figure 2). Lymphocytic invasion and nuclei were noted in tubules, suggestive of viral tubular invasion/nephropathy. No cytomegalovirus (CMV) was observed on repeat review of the renal parenchyma. Congo red stain was negative. 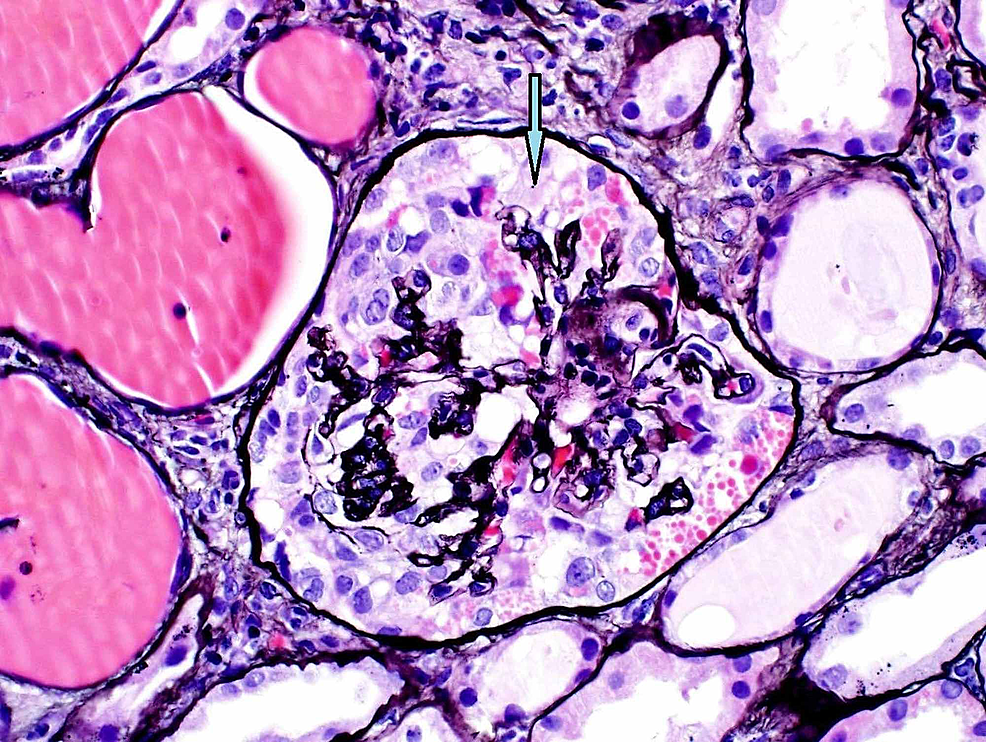 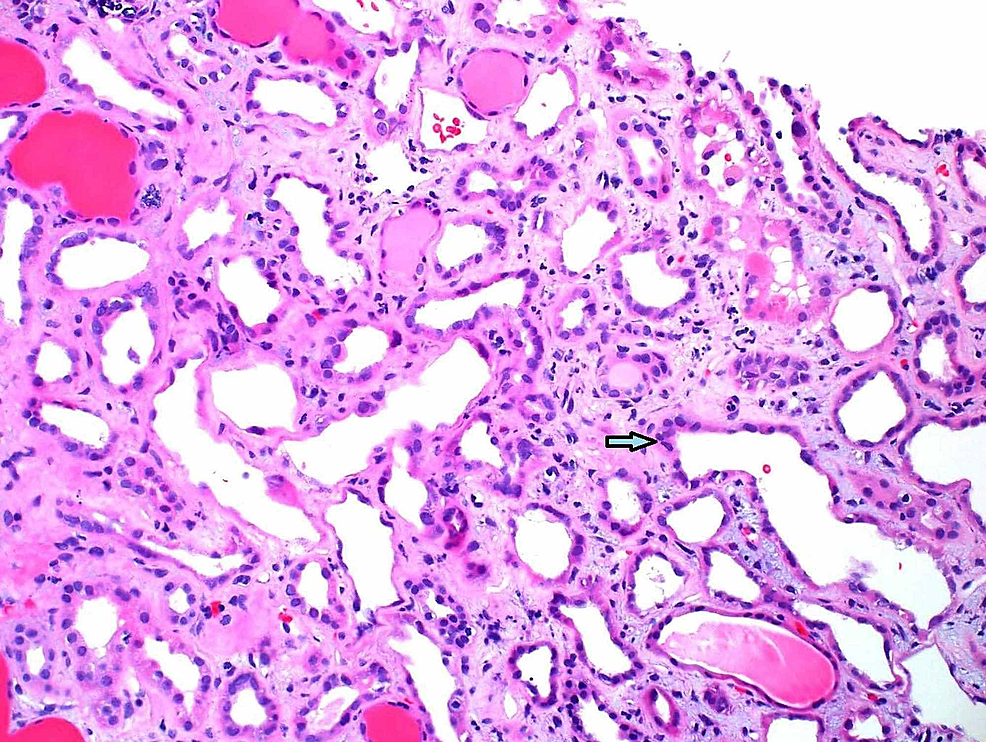 BK virus is highly seroprevalent in humans, but it appears to cause problems only among immunocompromised patients. BK virus-associated nephropathy manifests as an asymptomatic gradual rise in creatinine, and an abnormal urinalysis revealing renal tubular cells and inflammatory cells with tubulointerstitial nephritis [7]. Collapsing glomerulopathy is a morphologic variant of focal segmental glomerulosclerosis, which accounts for about 40% of the nephrotic syndrome in adults [8]. BK virus associated-nephrotic syndrome or collapsing nephropathy is rare, with only two cases reported previously. A 12-year-old boy with end-stage renal disease due to nephronophthisis developed BK virus-associated nephritic-nephrotic syndrome 18 months after a kidney transplant [9]. The other case occurred in a native kidney of a previously healthy 4-year-old boy [10].

In our case, the patient presented as nephrotic/nephritic syndrome, with edema, azotemia, hypoalbuminemia, and heavy proteinuria. Kidney biopsy confirmed collapsing glomerulopathy and tubular injury as the cause. Tubular necrosis with lymphocytic invasion and nuclei were noted in tubules, which was suggestive of viral tubular invasion/nephropathy. Her urine and serum BK viral load were both found to be high. Two to three weeks after anti-BK virus therapy with IVIG and leflunomide, her kidney function recovered to her baseline and her proteinuria significantly decreased to 2 + on urinalysis. According to the time course and clinical scenario, a final diagnosis of BK virus associated-collapsing glomerulopathy and tubular necrosis was made. Although the patient had been taking Bactrim® for prophylaxis, no interstitial nephritis was observed in this patient’s biopsy. However, there might be a component of congestive nephropathy/cardiorenal syndrome in the backdrop of the acute decline of left ventricular systolic function, causing a lack of forwarding blood flow. And her primary hematological disease and race could also put her at risk for collapsing glomerulonephropathy.

Minimization of immunosuppression upon detection of BK viremia may prevent clinically evident BK virus nephropathy. While there has been no FDA approved treatment for BK virus-associated nephropathy. Generally, it is treated with immunomodulant agent leflunomide, or IVIG together with the reduction of immunosuppression [11]. For BK virus associated-nephrotic syndrome/collapsing glomerulopathy, the immunomodulant agent seems to be helpful in our case. Nevertheless, immunosuppressive treatment resulted in graft failure, renal failure or even death in the two previous cases [9, 10]. Further research is needed to determine effective treatment.

© Copyright 2019
Liu et al. This is an open access article distributed under the terms of the Creative Commons Attribution License CC-BY 3.0., which permits unrestricted use, distribution, and reproduction in any medium, provided the original author and source are credited.