Neuroendocrine tumors (NETs) of gastrointestinal tract are rare entities. Their presence as synchronous lesions with adenocarcinoma has rarely been described in the literature. Cases of synchronous lesions of adenocarcinoma with neuroendocrine component have been described in the colon in the past. However, synchronous presence in the ampulla of Vater is quite uncommon. In the duodenum, NETs constitute 5.7 to 7.9% of the neuroendocrine neoplasms of the gastroenteropancreatic tract. We present a case of 65-year-old male who presented with abdominal symptoms and weight loss, was found to have adenocarcinoma of the ampulla of Vater on biopsy via endoscopic retrograde cholangiopancreatography (ERCP), for which he underwent Whipple’s surgery and was found to have neuroendocrine component along with adenocarcinoma postoperatively on histology.

Neuroendocrine tumors, although rare, account for 0.5% of all the newly diagnosed malignancies [1]. Neuroendocrine tumors have histopathological spectrum ranging from low-grade typical carcinoid to intermediate-grade atypical (malignant) carcinoid to high-grade neuroendocrine carcinomas. Most of these tumors are non-secretory but sometimes they secrete amines, which produces symptoms of flushing, diarrhea, etc. 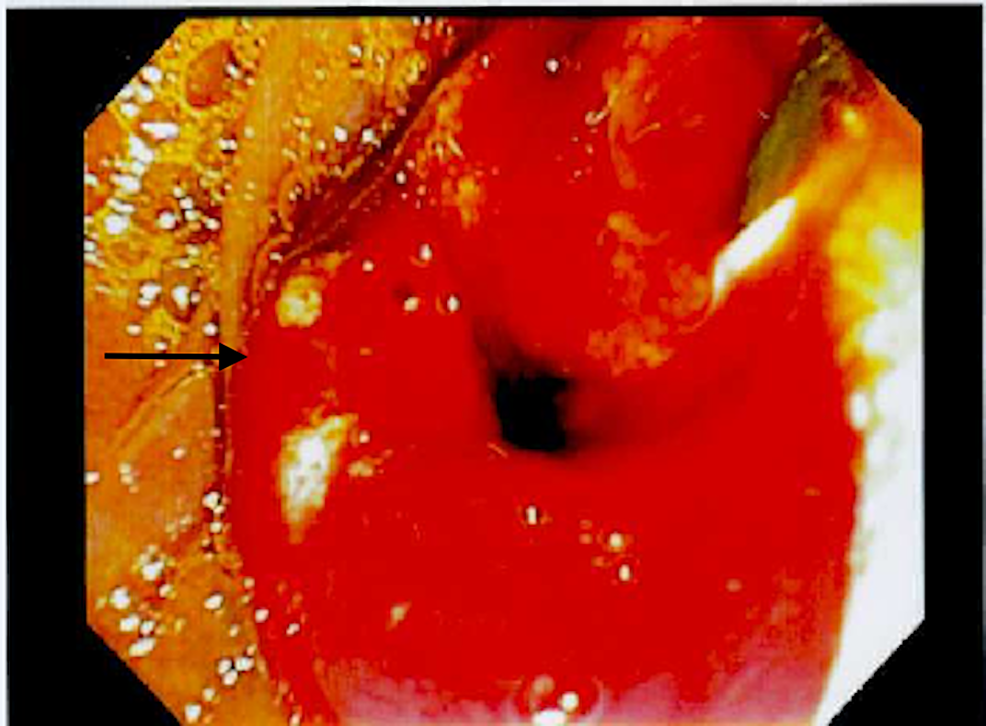 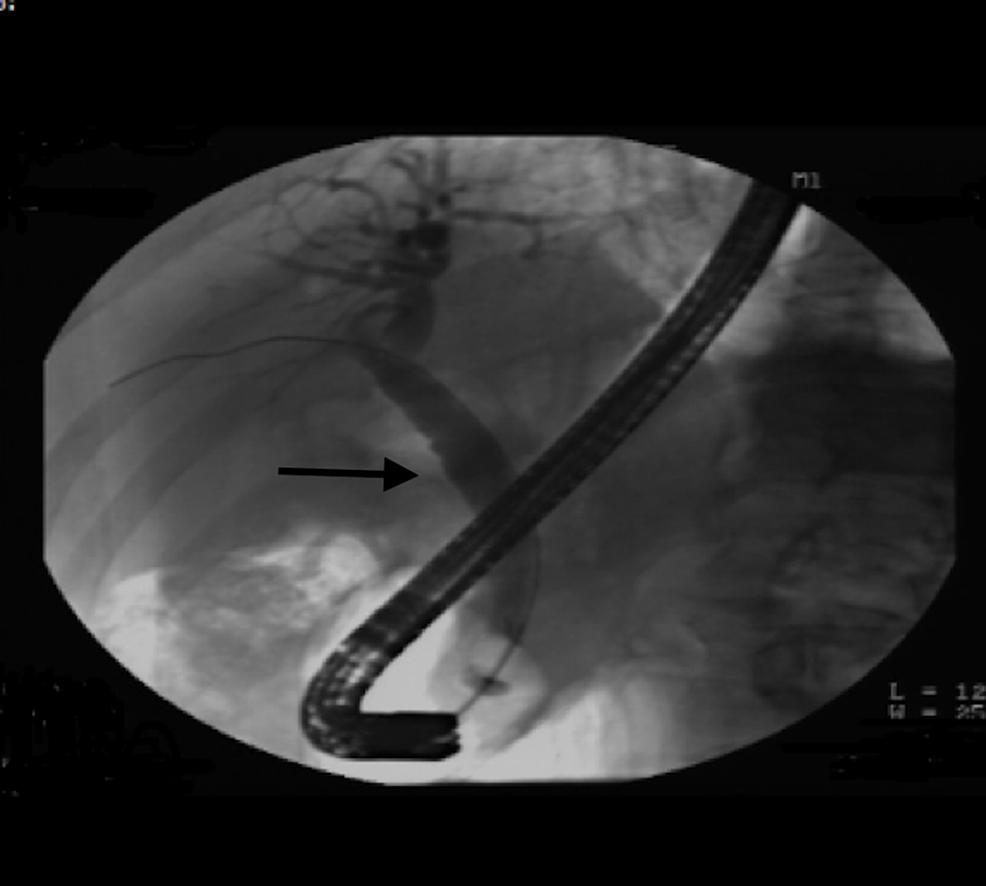 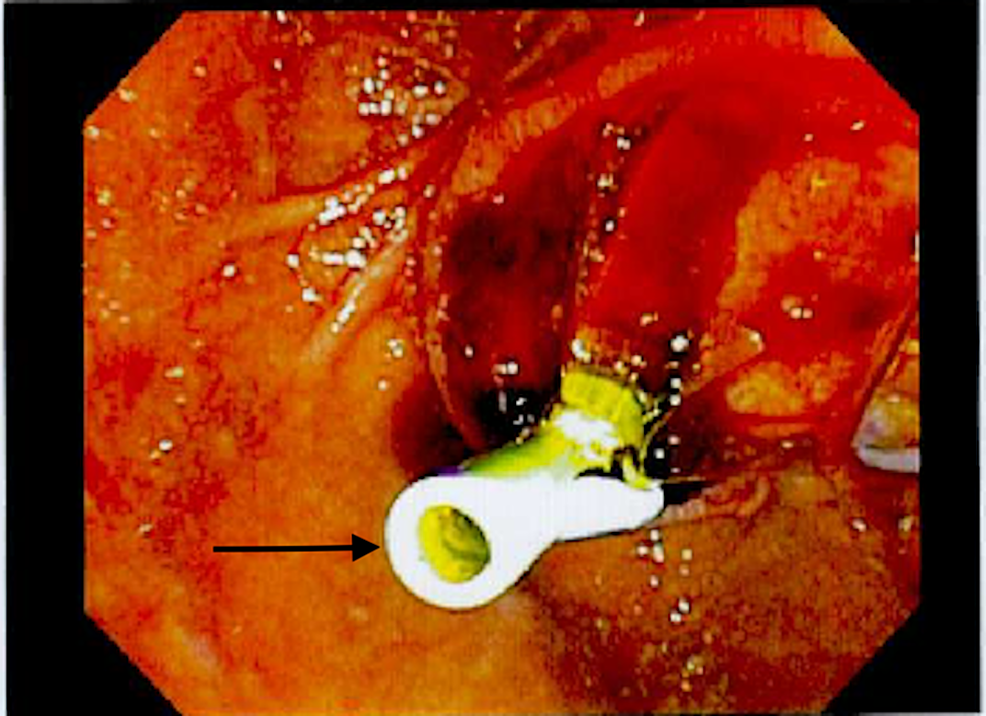 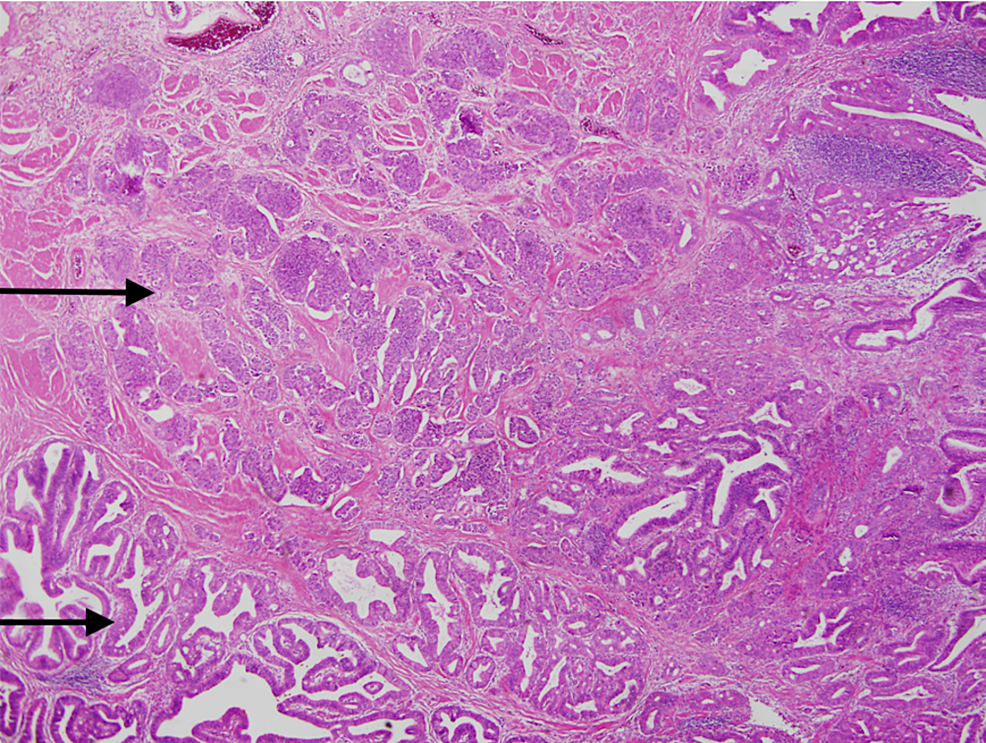 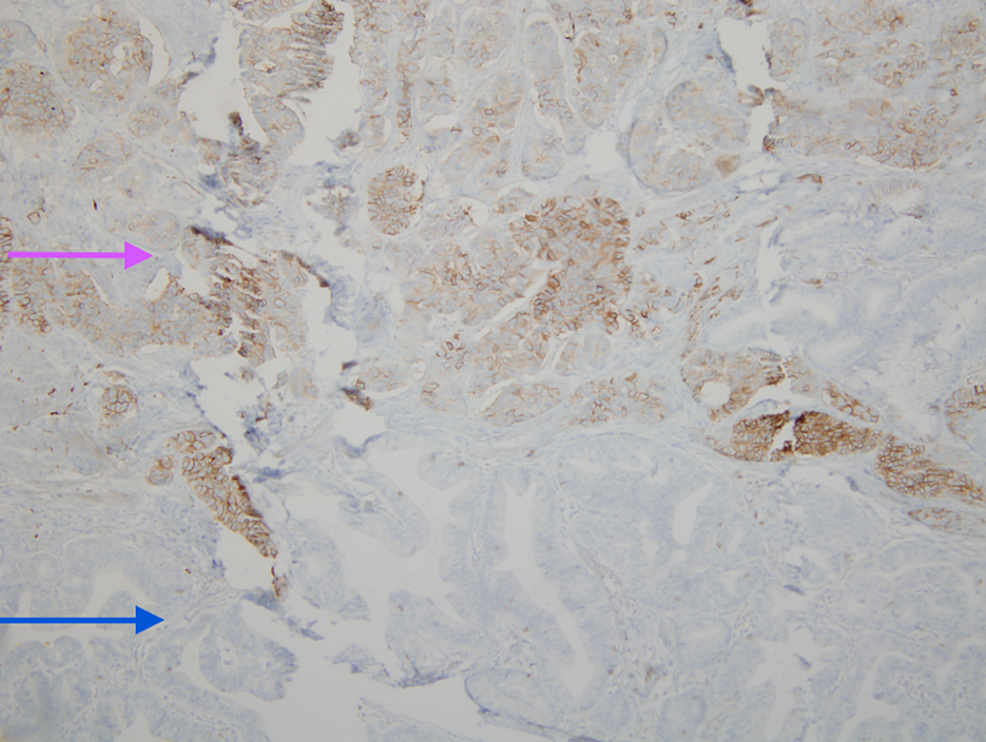 The incidence and prevalence of neuroendocrine tumors (NETs) is increasing in recent years due to advanced diagnostic modalities and detection of cancer at early stages. The most common sites of presentation are gastrointestinal tract (62%-67%) and the lung (22%-27%) [2]. In addition, it can involve other organs like ovaries, liver and kidneys. However, among gastroenteropancreatic NET, the ampulla of Vater represents an uncommon site for the disease. According to JAMA Oncology 2017, incidence of NET in gastropancreatic tract is 3.56 per 100,000 [3]. In an analysis of 13,715 neuroendocrine tumors reported over a 50-year period to the Surveillance, Epidemiology, and End Results Program of the National Cancer Institute, only 360 cases involved the duodenum or ampulla [4].

The synchronous presence of other malignancies associated with NETs is based on field effect theory as is proposed by some authors, according to which the growth of neuroendocrine and other malignancy is stimulated by a common carcinogenic effect. The other school of thought is that NETs secrete various neuropeptides or non-neuropeptides, many of which have specific growth factor properties. For example, gastrin and cholecystokinin (CCK) can stimulate gastric mucosal and pancreatic cell growth [8].

The modality of treatment depends upon the staging of the tumor, however the principles of treatment remain the same for adenocarcinoma tumor and the neuroendocrine tumor. Pancreaticoduodenectomy is the treatment of choice for adenocarcinoma of ampulla of Vater, which is also the preferred modality for neuroendocrine tumor if lymph node metastasis is present [12,13]. Ampullectomy is reserved only in very selected patients in whom no lymph node involvement is suspected but it is often accompanied by lymph node dissection for complete cure since even in local tumors, the rate of lymph node metastasis is 10% [13,14].

Clearly, the presence of these lesions together in one tumor is not coincidental, therefore suggesting a common link in their pathogenesis. Further studies are needed to determine the pathogenesis of these synchronous lesions. The presence of synchronous and metachronous neuroendocrine tumors with other primary malignancies is being increasingly identified as described above. Further screening with imaging and endoscopy is recommended in patients diagnosed with neuroendocrine tumors to search for primary malignancies.

The increasing incidence of presence of synchronous lesions with adenocarcinoma is more than merely a coincident. There might be a common link in their pathogenesis which remains unexplored. Further studies are needed to establish this correlation. Since there is increasing incidence of presence of second primary malignancy with neuroendocrine tumors, physicians should screen patients with neuroendocrine tumors to search for primary malignancies.

© Copyright 2019
Kochar et al. This is an open access article distributed under the terms of the Creative Commons Attribution License CC-BY 3.0., which permits unrestricted use, distribution, and reproduction in any medium, provided the original author and source are credited.