Pancreas divisum is reported to occur in up to 14% of the population. The majority of patients with this congenital anomaly remain asymptomatic. Pancreas divisum can be associated with recurrent pancreatitis due to inadequate drainage of pancreatic secretions through the dorsal pancreatic duct and the minor papilla. We present a patient with a six-month history of recurrent acute pancreatitis due to an impacted pancreatic duct stone in the minor papilla and an unrecognized pancreas divisum. This situation has only been reported in two other cases in the literature.

A 65-year-old male with essential hypertension and a history of heavy alcohol use presented to the hospital with dull, unremitting epigastric pain radiating to the back for the past three weeks. He had associated nausea, early satiety, and anorexia. He had no fever, chills, emesis, jaundice, nor changes in bowel movements. On examination, his blood pressure was 148/83 mmHg, heart rate was 83 beats per minute, and he was afebrile. No scleral icterus was noted. He had a soft abdomen with mild epigastric tenderness, no palpable organomegaly, and bowel sounds were present. The remainder of his physical examination was noncontributory. Pertinent laboratory tests at that time included a leukocyte count of 4,700 K/uL, hemoglobin 13.2 g/dl, hematocrit 39%, creatinine 0.72 mg/dl, blood urea nitrogen 4 mg/dl, lipase 250 U/L (range 16-61 U/L), alkaline phosphatase 168 U/L (range 32-117 U/L), with normal bilirubin and transaminase levels. Computed tomography (CT) of the abdomen reported a calcified stone in the pancreatic duct with a dilated duct in the body and tail of the pancreas and an additional stone in the duct at the proximal body of the pancreas. An abdominal ultrasound revealed cholelithiasis. The patient underwent endoscopic retrograde cholangiopancreatography (ERCP) with biliary sphincterotomy but pancreatic duct cannulation was unsuccessful. Laparoscopic cholecystectomy was performed for presumed gallstone pancreatitis and the patient was discharged home.

Abdominal pain recurred and five weeks later, the patient was readmitted with acute pancreatitis. Magnetic resonance cholangiopancreatography (MRCP) demonstrated a 5-mm filling defect in the mid pancreatic duct. An ERCP was repeated but attempts at pancreatic duct cannulation were unsuccessful. Pancreaticoduodenectomy was recommended to the patient, and he was transferred to Cleveland Clinic for a second opinion. Endoscopic ultrasound (EUS) was performed, which demonstrated Type 1 PD, an impacted stone at the minor papilla with dorsal duct dilation, and changes of chronic pancreatitis. ERCP was performed next and the minor papilla was found to be bulging (Figure 1). 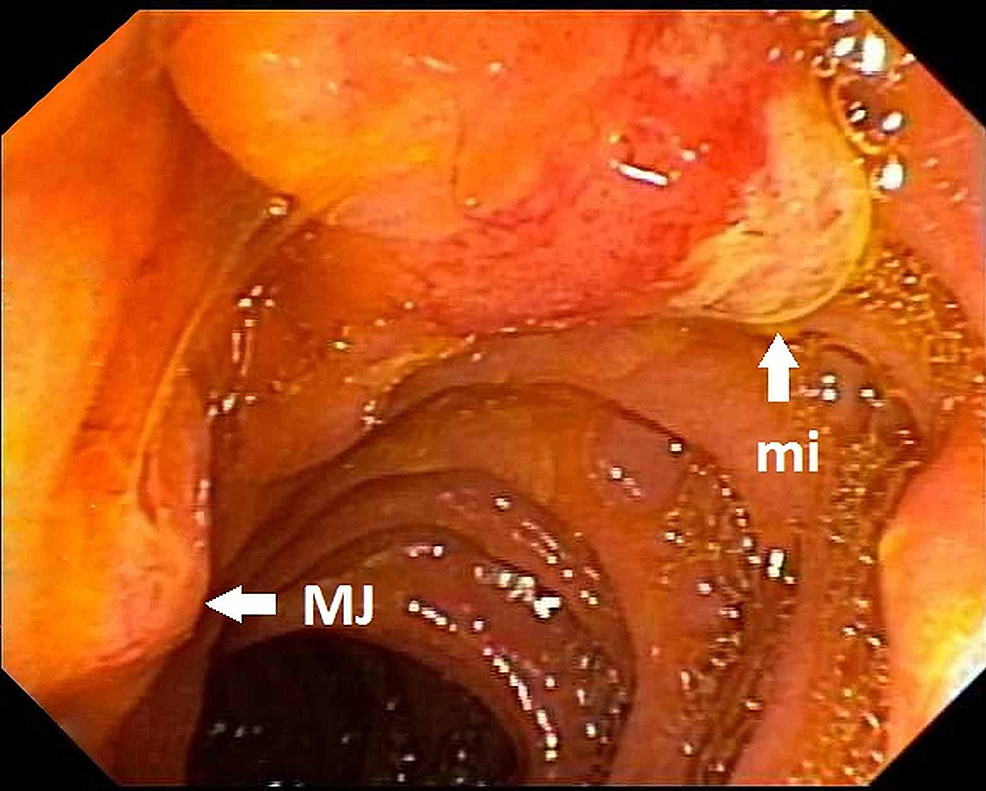 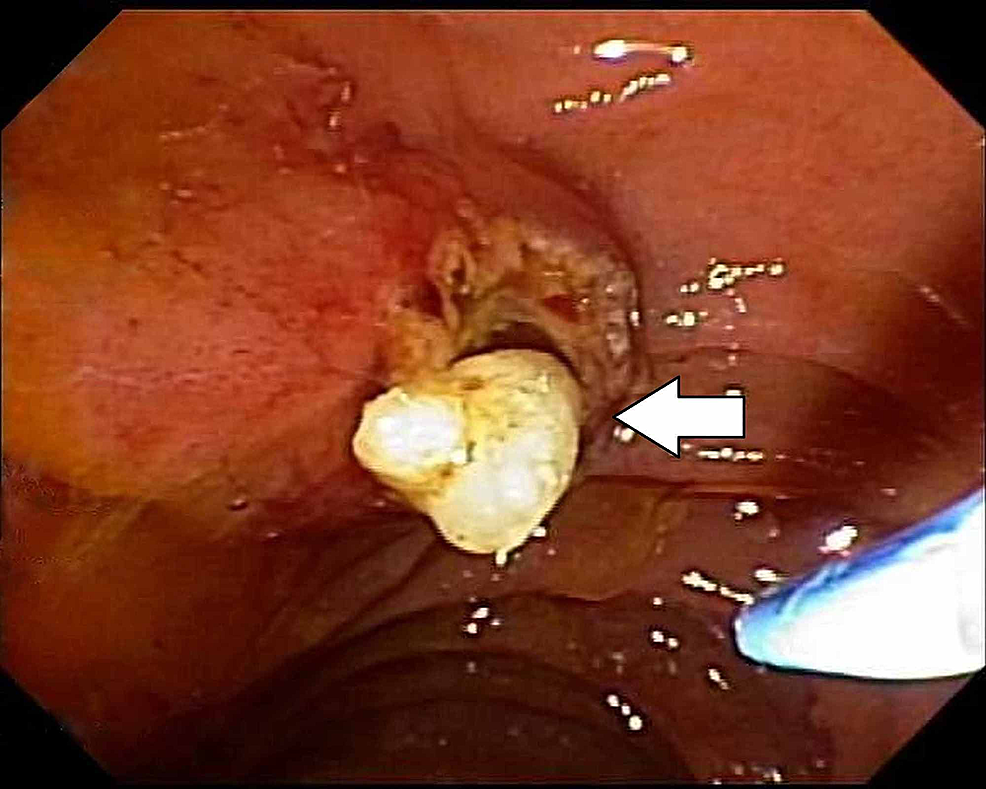 A temporary stent was placed into the dorsal pancreatic duct. The patient reported the resolution of his abdominal pain after the procedure. There were no procedure-related complications.

Over 95% of patients with PD are asymptomatic while the remaining 5% develop symptoms of acute pancreatitis [4]. In the absence of ductal stones, pancreatitis develops in PD because of increased ductal pressure secondary to insufficient drainage of pancreatic secretions through the minor papilla [4]. Our patient, unfortunately, was in the 5% category who developed recurrent symptoms of acute pancreatitis. The reason as to why only a select few patients develop symptoms is not clear. The diagnosis of PD is often delayed due to the inadequate sensitivity of conventional radiographic cross-sectional imaging like magnetic resonance imaging (MRI) of the abdomen. The reported accuracy of EUS, MRCP, and multi-detector computed tomography (MDCT) to detect PD is variable and appears to relate to imaging protocols, the expertise of radiologists interpreting the study, and the skill of the endoscopist. In one study, the sensitivity of EUS was 86.7% higher than the sensitivities of MDCT (15.5%) and MRCP (60%) [5]. In a detailed systematic review and meta-analysis, MRCP, secretin-enhanced MRCP, and EUS were compared to address the diagnostic accuracies in the detection of pancreas divisum. It was concluded that EUS was more sensitive at 85% when compared to MRCP (59%) and secretin-enhanced MRCP (83%). All three imaging modalities had specificities above 97% [6].

This is a unique case with many important clinical points to consider. This is one of three reported cases of acute pancreatitis in a patient with PD due to an impacted stone at the minor papilla [7-9]. The two previously published cases were in 1999 from Switzerland and in 2016 from Japan [8-9]. This challenging case is interesting, as our patient experienced recurrent acute pancreatitis due to an impacted stone in the minor papilla in the setting of PD, which went unrecognized until EUS demonstration of the congenital anomaly. His symptoms resolved after minor papilla pancreatic sphincterotomy with the retrieval of the stone at ERCP. He was symptom-free at the six-month follow-up post-discharge.

The two most common causes of acute pancreatitis in the United States are alcohol abuse and cholelithiasis. Other causes include trauma, medications, infections, hypertriglyceridemia, pancreas divisum, and hereditary and auto-immune conditions. As internist and specialist, it is important to consider different etiologies of acute pancreatitis and ordering tests cost-effectively to narrow the differential. Our patient quit alcohol several years ago and was status post-cholecystectomy for presumed gallstone pancreatitis prior to presenting to Cleveland Clinic. However, he continued to have recurrent symptoms of acute pancreatitis. The diagnosis of pancreas divisum must be considered for which EUS would be the diagnostic modality of choice, based on its sensitivity and specificity.

© Copyright 2019
Farooqi et al. This is an open access article distributed under the terms of the Creative Commons Attribution License CC-BY 3.0., which permits unrestricted use, distribution, and reproduction in any medium, provided the original author and source are credited.