Open reduction and internal fixation (ORIF), hybrid fixation, and external fixation are available treatment options for bicondylar fractures of the proximal tibia but which one is superior to the others is not yet established. Therefore, the study aimed to establish a gold standard treatment option for bicondylar fractures by comparing the clinical, functional, and radiological outcomes managed by Ilizarov and ORIF at 24 months.

This was a retrospective study conducted from 2009 to 2014 at a public sector, tertiary care, level I trauma center. Patients with Schatzker type V and type VI open and closed fractures were included. Floating knee, pathological fractures of the tibia, and patients having medical conditions were excluded from the study. Honkonen and Jarvinen (HJ) criteria for subjective, clinical, radiological, and functional outcomes were used to compare between the two groups at 24 months. Demographic data included age, gender, Schatzker type, mechanism of injury, and range of knee flexion. Chi-square was used to find the level of significance, which was 0.05.

No single treatment option can be applied in all cases, and the decision depends on the complexity of the injury, the surgeon’s expertise, and host factors.

The standard method treatment is ORIF with osteosynthesis and dual plating is the most stable mechanical construct in such fractures [8]. The benefits with this approach are the optimal visualization of the fracture for reduction and fixation, absolute stability, and restoration of joint congruity. The drawbacks of this method are extensive soft-tissue dissection over the subcutaneous proximal end of the tibia, excessive periosteal stripping, and devascularization of the periosteum, skin necrosis, and infection [9-11].

Recently, the less invasive stabilization system (LISS) plating system and Ilizarov have been advocated to minimize ORIF complications. According to the Canadian Orthopaedic Trauma Society, the benefits of Ilizarov are that it can be used in open fractures, whereas ORIF is limited to closed fractures. Another advantage of Ilizarov is that it does not disrupt the blood supply, and thus the periosteal supply remains intact, it allows early weight bearing and thus leads to a shorter hospital stay [12]. Another advantage of Ilizarov is that it is applied percutaneously. Therefore, the apparatus does not disturb fracture biology and provides physiologic fixation [13-14]. Furthermore, there is minimal soft tissue disruption, and it allows correction in multiple planes [15].

The significant pitfalls of Ilizarov are pin-site infections and patient compliance with the cumbersome apparatus, the necessity of strict follow-up, and joint congruity is not restored always [14].

Overall, there is still ambiguity over which surgical method is superior to the other, and there is no defined gold standard technique for these fractures. Therefore, the study aimed to compare the functional, radiological, and clinical outcomes of Schatzaker type V and VI fractures treated by Ilizarov versus internal fixation and reached a conclusion on which treatment modality was better than the other.

With the approval of the Medical Ethics Review Board Committee, the study was conducted in a two-unit, 80-bedded department of trauma and orthopedics of a level-I, tertiary care public sector hospital from 2009-2014.

The study was designed as a retrospective case-control study to compare the subjective, clinical, radiological, and functional outcomes of patients undergoing treatment for bicondylar fractures.

The study enrolled all the patients that were treated between 2009 and 2014 in both units.

The protocol included accessing the patient records retrospectively from the Hospital Internal Management System (HIMS). Patients were divided into two groups. Controls were labeled as group A (ORIF with dual plating), whereas the cases were designated as group B (Ilizarov). Patients were assigned to one of two treatment groups following simple randomization procedures (computerized random numbers).

Patients having an isolated open or closed Schatzker V or Schatzker VI were included in the study. Pathological fracture of the tibia, floating knee, polytrauma, patients lost to follow-up before 24 months, and significant comorbidities like congestive heart failure, hypertension, chronic liver disease, stroke, or obstructive lung disease were excluded from the study. Figure 1 shows the recruitment process. 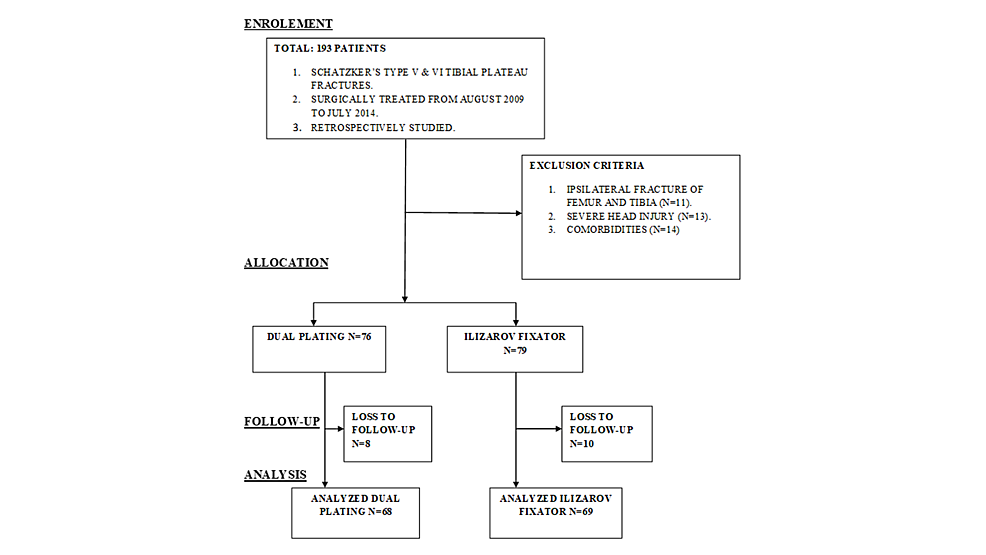 The outcome to be assessed was the clinical, radiological, and functional outcomes and a comparison of the results of both treatment options. Postoperative outcomes were analyzed and documented at 24 months from the date of surgery using the Honkonen and Jarvinen (HJ) criteria.

In 1992, Honkonen and Jarvinen et al. described a comprehensive grading system according to which tibial plateau fractures would be classified as excellent, good, fair, or poor [16].

The HJ criteria are based upon four parameters: subjective, clinical assessment, functional evaluation, and radiological scoring. The subjective assessment consists of the frequency of symptoms experienced by the patient: daily, weekly, fortnightly, monthly, or never. The clinical evaluation is based upon extension lag, range of flexion, and thigh atrophy. The functional assessment comprises the ability to walk, climb stairs, jump, squat, and duck walk. The radiological evaluation includes the degree of varus/valgus and tilting of the plateau, articular step-off and condylar widening in millimeters, and the relative joint space narrowing indicates degenerative changes after the plateau fracture.

Data in bracket indicate the standard deviation for continuous variables, whereas the values in brackets for categorical variable shows percentages.

There was no significance established as to which treatment option was superior to the other in terms of subjective, clinical, radiological, and functional outcomes at 24 months, as p-value was higher than 0.05. Table 2 illustrates the clinical, functional, and radiological outcome according to the Honkonen and Jarvinen criteria and Figure 1 shows the comparison between the two treatment modalities.

Table 2: Comparison of the subjective, radiological, functional, and clinical outcomes between the two groups according to the Honkonen and Jarvinen criteria 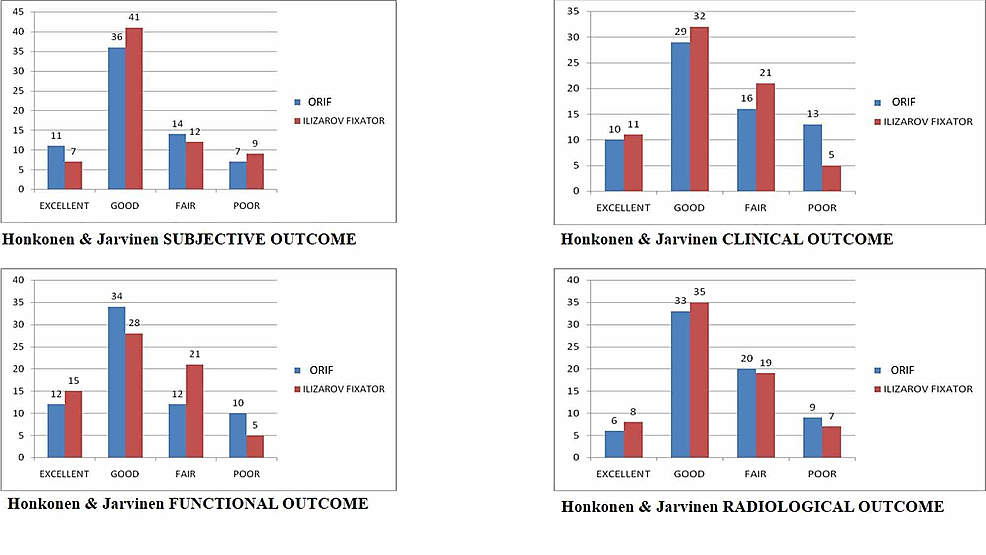 Our results suggest that there was no significant difference in the subjective, functional, clinical, and radiological outcomes between the patients treated by internal fixation versus external fixation. Therefore, we were unable to establish which treatment modality was better than the other. One of the reasons that there was no significant difference was because the surgery was performed by senior consultants who had vast experience and advanced training in treating complex trauma and fractures, respectively.

When citing previous literature on the management of Schatzker VI and VI fractures, we found limited publications comparing ORIF with external fixation [17]. Most of the publications focussed on either of the treatment methods. Table 3 shows some of the published data that compares both forms and treatment and provides a conclusion.

Pun et al. obtained a mean of 128.1 degrees of posttreatment knee flexion in his series of 22 Schatzker type V and VI fractures; the highest reported in the current literature [23]. The average results of our study were 115.51 degrees with 119.26 degrees in the Ilizarov-treated group and 111.71 degrees in the ORIF group. Better results in Pun et al. cohorts could be due to smaller sample sizes as compared to ours. Furthermore, his study does not compare the results of plating and Ilizarov separately.

However, our results were comparable with Canadian Orthopaedic Trauma Society, which showed that there was no statistical significance in the range of motion at two years (p-value: 0.09) with an average 109 degrees in the ORIF group as compared to 120 degrees in Ilizarov-treated patients [12].

A recent Cochrane review by McNamara et al. evaluating four randomized and two quasi-randomized trials, comparing ORIF with Ilizarov, did not find enough evidence to ascertain the best method of fixation. Current evidence does not contradict the idea of the best results obtained when using limited exposures to treat these fractures [24].

Our findings are also consistent with the 2015 Cochrane Review, as both groups showed overall good results and the final decision of the treatment modality depends on the surgeon's expertise and practice and the ability to overcome or resolve the complications secondary to the treatment offered.

Although the small population size, the lack of control groups, and the various functional assessment tools in the majority of the past publications limit the strength of any recommendations that could be made regarding the optimal options of the surgical method in bicondylar fractures, which makes our study relevant to current practice.

In conclusion, no single fixation strategy is superior in all cases, and the decision to optimally treat these complex injuries varies on a case-by-case basis. Above all, the final decision depends on the surgeon's expertise and practice and the ability to overcome and resolve the complications secondary to the treatment offered.

© Copyright 2019
Tahir et al. This is an open access article distributed under the terms of the Creative Commons Attribution License CC-BY 3.0., which permits unrestricted use, distribution, and reproduction in any medium, provided the original author and source are credited.

Data in bracket indicate the standard deviation for continuous variables, whereas the values in brackets for categorical variable shows percentages.

Table 2: Comparison of the subjective, radiological, functional, and clinical outcomes between the two groups according to the Honkonen and Jarvinen criteria