Spindle cell carcinoma is a rare pulmonary malignancy. The prognosis and treatments are unclear, with limited literature available. Here, we report a man who underwent bronchoscopy with an endobronchial biopsy after complaining of dyspnea on exertion. Computed tomography (CT) chest showed a 10 x 3 cm mass in the right upper lobe. Biopsy revealed spindle cell carcinoma, and he was referred to hematology for chemotherapy. He was lost to follow-up recently.

Sarcomatoid carcinoma of the lung is a rare, high-grade, poorly differentiated, non-small cell cancer. The incidence of sarcoma is 0.3% to 1.3% of all lung cancers [1-2]. According to the WHO classification, there are five histological variants of sarcomatoid carcinoma, among them is spindle cell carcinoma of the lung with rare histological subtypes [3]. A retrospective study of the 718 cases showed that spindle cell cancer accounted for 0.4% of all lung malignancy [4].

An 85-year-old male presented to the emergency department of our hospital with progressive dyspnea for one week along with dry cough and progressive bilateral leg swelling. He was noted to be confused at the time of the presentation, unable to answer to place and time. The patient had a known history of ischemic cardiomyopathy, complete heart block with the placement of a permanent pacemaker, significant smoking history of 100 pack-years, and chronic obstructive pulmonary disease (COPD). On presentation, his vital signs revealed tachypnea with a respiratory rate of 40 a minute, along with diffuse bilateral crackles on lung auscultation and bilateral lower extremity edema. 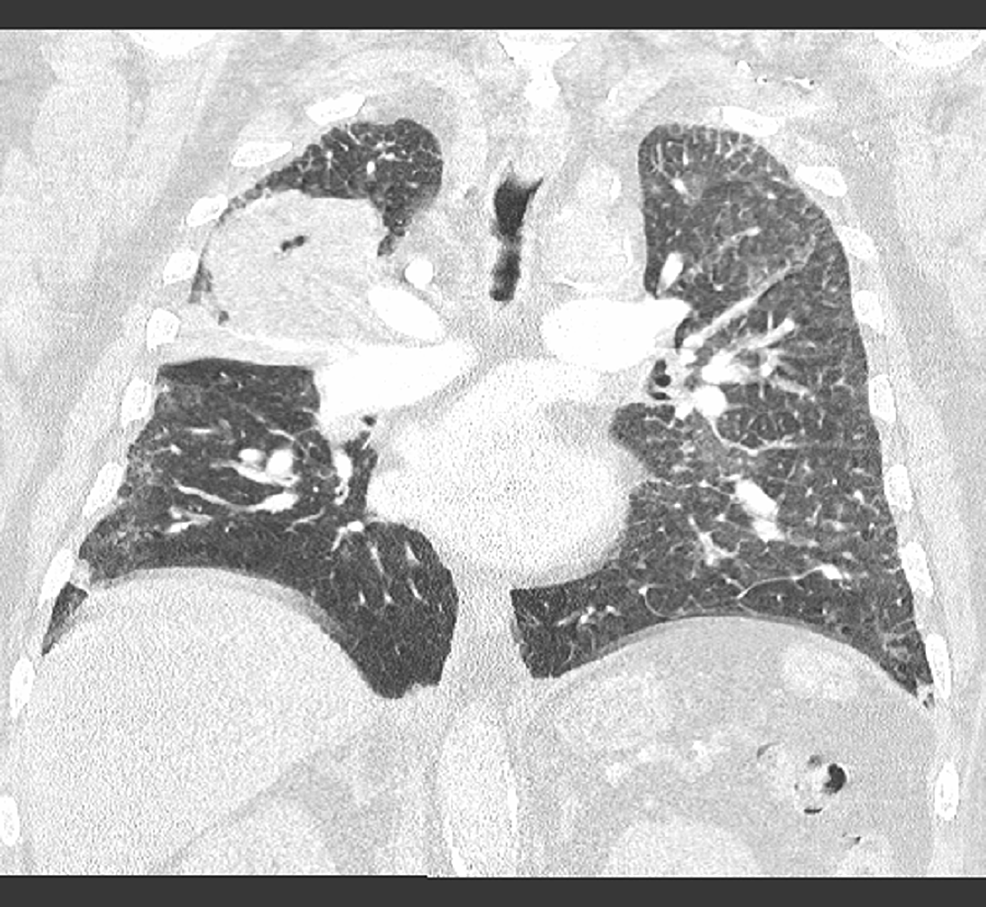 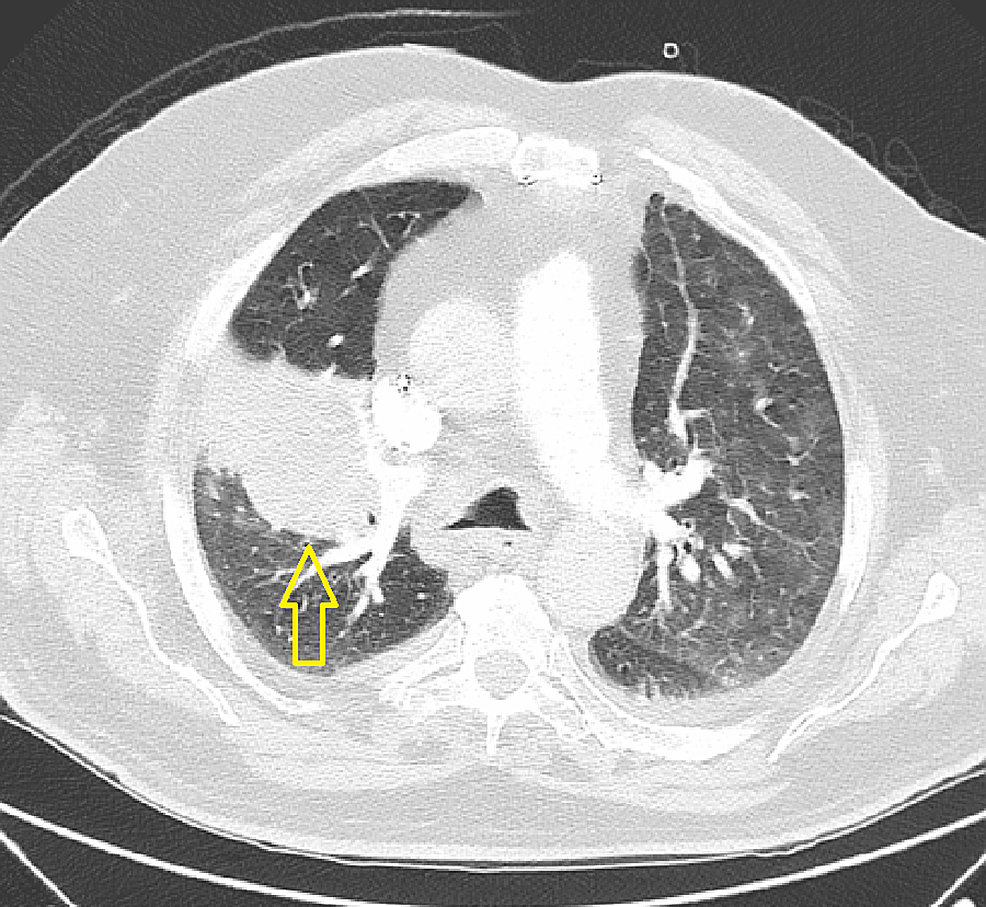 He was admitted to the medical intensive care unit (ICU) and managed with intravenous furosemide and non-invasive bilevel positive pressure ventilation, which resulted in a significant improvement in his respiratory symptoms.

The patient underwent fiberoptic flexible bronchoscopy to evaluate the mass. This revealed a near-complete occlusion of the right upper lobe bronchus with an exophytic fungating mass (Figure 3). Endobronchial biopsies were performed and suggestive that the patient had non-epithelial cancer originating from the endobronchial mucosa, with microscopic examination suggestive of spindle cell sarcoma (Figure 4). 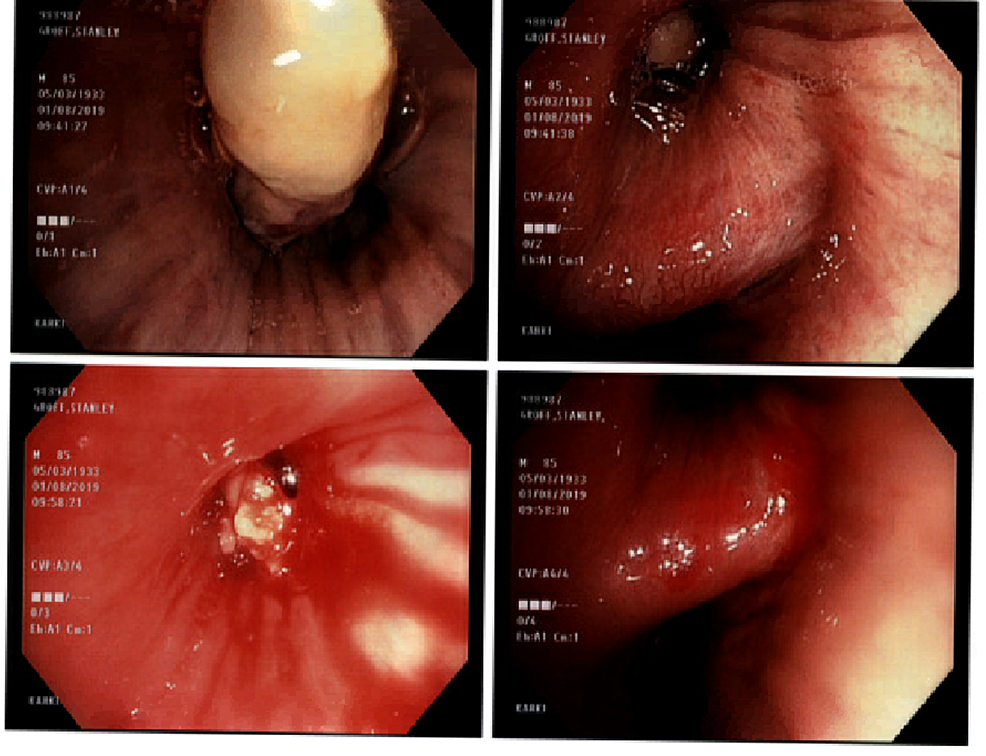 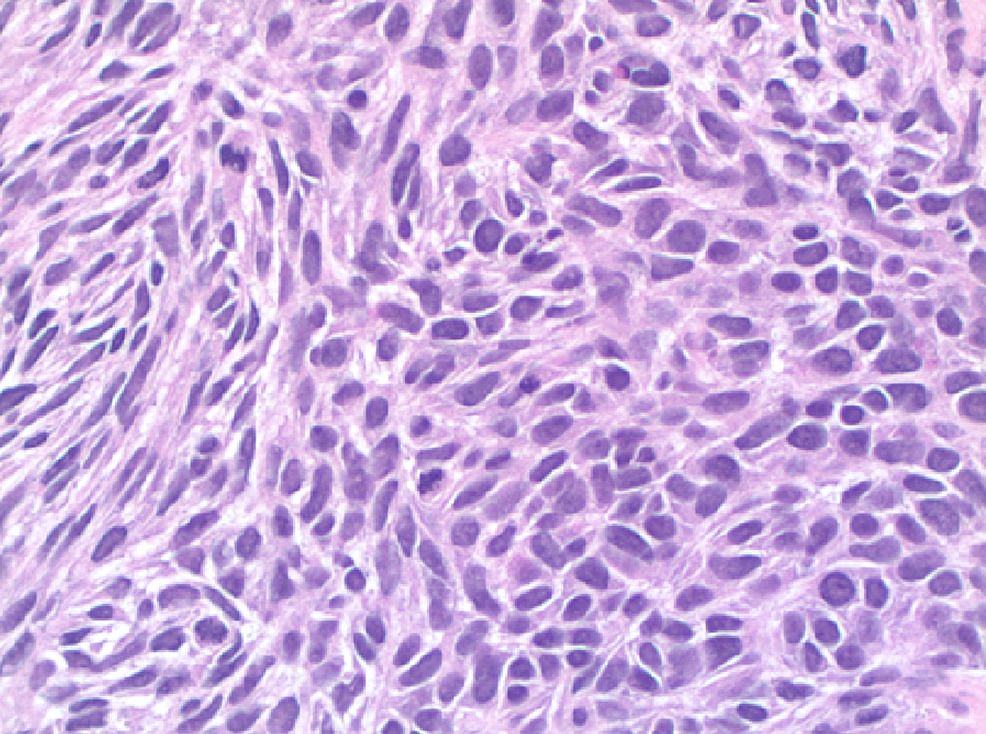 Microscopic examination of the biopsied tissue showed extensive necrotic spindle cell sarcoma. Immunohistochemical stain for vimentin, CD99, and BCL-2 was positive, along with negative pan-keratin, CK56, p63, synaptophysin, chromogranin, and CD34. The patient was referred to hematology-oncology and radiation therapy. He completed 20 treatments of radiation therapy and was found to have an interval decrease in the size of the tumor on repeat imaging.

Initial presentation may be chest pain, cough, shortness of breath, or hemoptysis. Computed tomography demonstrates that a peripheral cavitary lesion is common, however, there may be a collapse of certain lung segments if there is the presence of an endobronchial lesion [6]. Spindle cell cancer is strongly associated with cigarette smoking, as our patient had a significant smoking history as well [7]. In a clinicopathologic review of 78 cases of pleomorphic carcinoma of the lung, 18% of patients had incidental findings on chest X-ray and spindle cell carcinoma was most frequently associated with giant cell carcinoma [1]. Most of the spindle cell cancers arise in the upper lobe of the peripheral lung [8].

Immunohistochemical markers are highly positive for pan-cytokeratin, vimentin, Ki67, and negative for other markers like CK5/6, p63 epithelial markers, synaptophysin, and chromogranin [4]. Other endobronchial lesions, such as leiomyomas, showed more consistent staining, with smooth muscle markers such as smooth muscle actin, desmin, and smooth muscle myosin heavy chain [5]. Treatment depends on the staging of cancer and may include surgical resection, chemotherapy, and radiation therapy. Among those patients with surgery, the recurrence rate was 30% [8].

Pulmonary spinal cell carcinoma is a rare and aggressive malignancy. Our patient was an active smoke who never received a low-dose lung CT for cancer screening. He was admitted to the ICU and was found to have a right upper lobe mass. The biopsy confirmed the diagnosis, and he was referred to radiation therapy. Lung cancer screening should be reinforced in clinical practice and may have, perhaps, detected his mass at an earlier stage as compared to his late-stage presentation. Emphasis should be placed on smoking cessation and lung cancer screenings.