The patient is a 17-year-old male who presented with intracranial hypertension due to meningioma at the right dominant sigmoid sinus, which was treated by a Simpson grade IV surgical resection followed by stereotactic radiosurgery. Following treatment, his papilledema resolved and he remains symptom-free at 18 months.

Meningiomas are benign neoplasms that arise from arachnoid cap cells. The arachnoid cap cells protrude into the venous sinuses and are most abundant around the superior sagittal sinus. The posterior fossa is the site for 7-10% meningiomas, of which 10% involve the transverse or sigmoid sinus [1]. Meningiomas are commonly asymptomatic but can present with symptoms of mass effect such as headache as well as symptoms peculiar to location. Invasion of the venous sinuses by a meningioma can cause obstruction of the venous drainage leading to increases in the intracranial pressure, and venous infarctions [2].

The patient is a 17-year-old male who presented with 3-month history of headache, worse in the morning and associated with blurry vision, nausea and vomiting. He initially presented to an optometrist at an outside hospital, who detected bilateral papilledema and referred him for further workup. On clinical examination, he was neurologically intact. Magnetic resonance imaging (MRI) of the brain, with gadolinium contrast, showed an enhancing 1.5 cm extra-axial mass causing stenosis of the dominant right sigmoid sinus (Figure 1).

The patient also underwent lumbar puncture with fluoroscopic guidance with an opening pressure of 45 mmHg. Diagnostic cerebral angiogram and venous manometry were also performed as follows: A single wall needle was utilized to access the right common femoral artery and using the Seldinger technique a 5-French sheath was placed and connected to continuous flush. Cerebral arteriography was performed with a 5-French catheter. Subsequently the right common femoral vein was accessed with a 5-French vascular access sheath which was connected to a continuous flush. Using a guidewire, a chaperone 6-French catheter was navigated to the level of the right internal jugular vein. Subsequently through the chaperone a Prowler catheter (Codman Neurovascular, New Brunswick, New Jersey, USA) was advanced over an Avigo guidewire (Medtronic, Minneapolis, Minnesota, USA) into the right superior sagittal sinus, right transverse sinus, right sigmoid sinus and right internal jugular vein with pressure measurements at each of those locations. Catheter and sheath were removed at the end of the procedure from both the right common femoral artery and vein. Findings included a filling defect within the right sigmoid sinus due to the mass lesion (Figure 3). 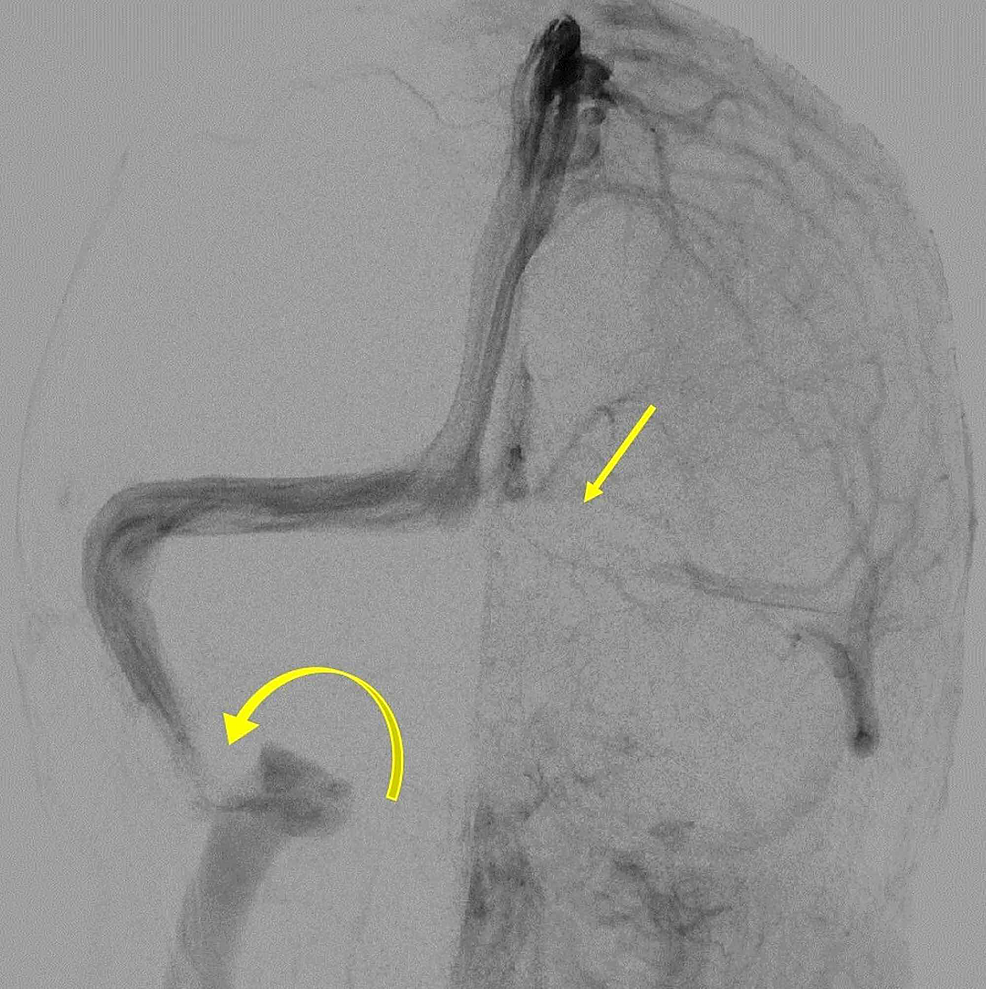 There was no delay in transit of contrast from the right straight sinus/ torcula to the right internal jugular vein. Manometry showed a central venous pressure of 36 mmHg (normal: 2-6 mmHg) within the right transverse sinus and 10 mmHg (normal: 2-6 mm Hg) within the right internal jugular vein (a 26 mm Hg pressure gradient across the mass on the right sigmoid sinus). Based on the patient’s clinical signs of increased intracranial pressure and the pressure gradient of 26 mm Hg (normal: <8 mm Hg) across the mass on the right sigmoid sinus, the decision was made to perform surgical debulking of the tumor followed by postoperative radiosurgery. Of note cerebral venous pressure gradient has been defined as ≥ 8 mmHg on venographic manometry [4]. An external ventricular drain was placed to drain cerebrospinal fluid for brain relaxation during surgery. A right-sided stereotactic retrosigmoid craniotomy was then performed, with the patient in the three-quarter prone position. Frozen section histology was consistent with a meningioma. Simpson grade IV resection of the tumor was carried out as this was considered safest in order to prevent injury to the dominant sigmoid sinus. Postoperative MRI brain with gadolinium contrast showed the residual tumor (Figure 4).

The final pathology of the tumor was reported as WHO grade I meningioma. Given the high rate of meningioma re-growth after Simpson grade IV resection, we decided to treat the residual tumor with stereotactic radiosurgery. The patient underwent Gamma Knife Radiosurgery to the residual meningioma at six months postoperatively, consisting of 12.5 Gy to the 50% isodose line with a total number of four isocenters. At immediate follow up, patient’s symptoms and papilledema had resolved. He remains asymptomatic at his 18-month follow-up.

Posterior fossa meningiomas constitute 7-10% of all meningiomas, with 10% involving the transverse or sigmoid sinuses [1]. Majority of patients with meningiomas are asymptomatic. However, symptomatic patients often present with symptoms of mass effect such as headache as well as symptoms peculiar to location. Invasion of the venous sinuses by a meningioma can cause obstruction of venous drainage leading to increase in intracranial pressure and papilledema. In this report, we described the management of a 17-year-old male who presented with intracranial hypertension caused by a meningioma at the right dominant sigmoid sinus. To the best of our knowledge the cerebral venous pressure gradient has not been recorded in any such cases.

The diagnosis of intracranial hypertension is based on signs and symptoms of increased intracranial pressure, brain imaging and objective demonstration of increased cerebrospinal fluid pressure. Our patient presented with classic clinical findings of chronic headache and papilledema. Papilledema was demonstrated on fundoscopy and also on brain imaging. Passi et al. described classic MRI findings in papilledema [5]. Our patient demonstrated all these findings, which included flattening of the posterior sclera, enhancement of the prelaminar optic nerve, distension of the peri-optic subarachnoid space, intraocular protrusion of the prelaminar optic nerve and vertical tortuosity of the orbital optic nerve. Lumbar puncture confirmed elevation of cerebrospinal fluid pressure. Venous manometry is a very useful quantitative adjunct in confirming venous obstruction and in planning of treatment options such as stenting [11]. It is especially important in cases where symptoms of intracranial hypertension are less obvious. Our patient underwent venography and manometry and was found to have a pressure gradient of 26 mmHg across the mass on the right sigmoid sinus.

One of the goals of treatment for intracranial hypertension caused by a meningioma compressing the dural venous sinus is to relieve the obstruction. Options for achieving this include surgical resection, stereotactic radiosurgery, stenting or a combination of these modalities. The criteria for venous stenting include central cerebral venous pressure of ≥22mm Hg and a pressure gradient of at least 8 mmHg. Venous stenting for intracranial hypertension is minimally invasive and is especially useful when the patient is considered high risk for open cranial surgery [11-13]. Even though our patient met the criteria for venous stenting, stenting was not offered because of the potential for re-stenosis from continued tumor growth and intimal hyperplasia. Another disadvantage of the option of stenting, especially in this pediatric patient, would be the need for long-term antiplatelet therapy to prevent stent thrombosis. Our patient was offered surgical debulking of the meningioma (Simpson grade IV) followed by stereotactic radiosurgery to the residual tumor.

Mazur et al. described the nuances of surgical management of meningiomas involving the transverse or sigmoid sinus [3]. During surgical planning it is important to determine the degree of intravascular tumor invasion, the degree of sinus occlusion and the anatomy of venous outflow. This is achieved with preoperative imaging modalities including magnetic resonance angiography, computed tomography (CT) angiography and cerebral angiography. Cerebral angiography is particularly important in delineating the venous anatomy in the case of a unilateral dominant transverse-sigmoid sinus involvement [14]. Cerebral angiography revealed that our patient had a filling defect within the right sigmoid sinus due to the mass lesion. There was no delay in transit of contrast from the right straight sinus/torcula to the right internal jugular vein. There was also no arterial supply from the intracranial circulation, but there was a small tortuous feeding vessel from the ascending pharyngeal artery. The left transverse sinus was hypoplastic. The occurrence of the tumor around a dominant right sigmoid sinus with partial occlusion partly informed our conservative approach to tumor resection. Care was taken during surgery to preserve bridging veins so as to avoid postoperative edema and venous infarction. The tumor was extravascularly debulked without opening the sinus. Inadvertent opening of the venous sinus is associated with increased risk of air-embolism. In this case, injuring the dominant sinus would have been riskier given that even compression was resulting in intracranial hypertension.

Sigmoid sinus meningioma can cause intracranial hypertension. Conservative surgical resection followed by stereotactic radiosurgery offers immediate relief of symptoms and excellent tumor control while avoiding the morbidity of a more radical surgical approach. In addition, using venographic manometry provides confirmation of the pathophysiology of intracranial hypertension in this patient.

© Copyright 2019
Cheyuo et al. This is an open access article distributed under the terms of the Creative Commons Attribution License CC-BY 3.0., which permits unrestricted use, distribution, and reproduction in any medium, provided the original author and source are credited.