Herein, we report a case in which the right common iliac vein was absent and the right internal iliac vein drained to the contralateral side. 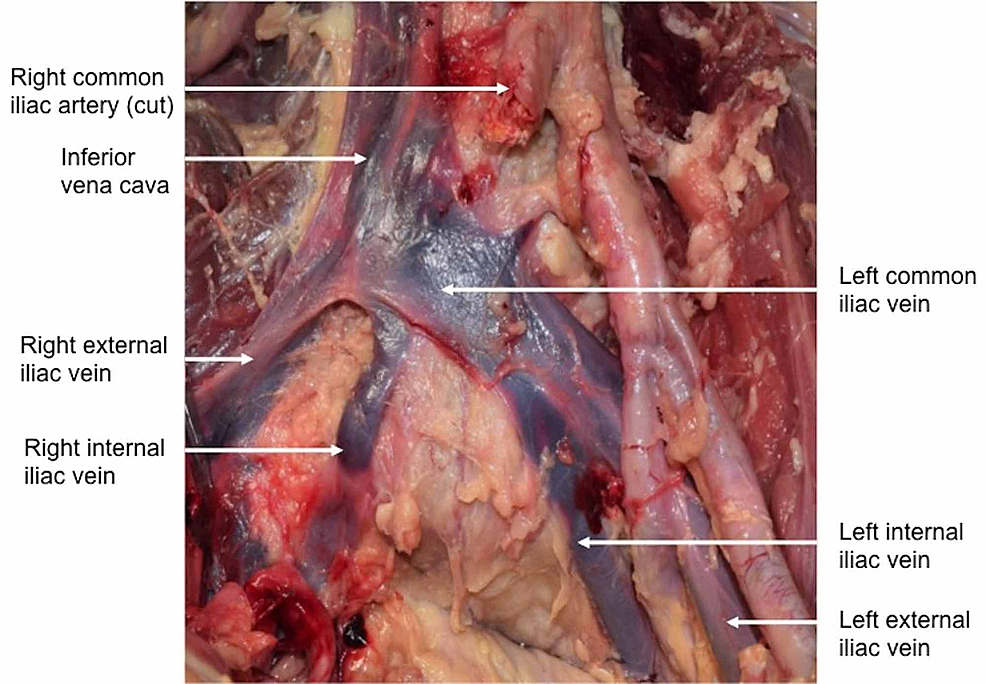 Looking at the embryological development of the common iliac vein and its subsidiaries may provide insight into the potential causality of these types of variations. During embryogenesis, the cardinal veins provide most of the venous drainage into the sinus venosus, with the anterior cardinal veins draining the cranial portion of the embryo and the posterior cardinal veins draining the caudal portion. Most of the posterior cardinal veins regress except the iliac anastomosis portion and the subcardinal and supracardinal portions. The supracardinal portion will eventually give rise to the inferior vena cava while the iliac anastomosis will become the common, external, and internal iliac veins. Any malformation in this process can result in the agenesis of the common iliac vein.

Anatomical variants are important to recognize, as they can aid in the identification of possible disease states and in the prevention of exacerbation. For example, “supine hypotensive syndrome” occurs due to inferior vena cava (IVC) obstruction leading to an inadequate venous return to the heart. This syndrome especially manifests in pregnant women during the third trimester, as their cardiac demand is at its highest. In cases of IVC obstruction, the body uses collateral venous systems in order to return blood back to the heart. The superficial collateral system, consisting of the anastomosis of the external iliac vein and inferior epigastric vein, connects the drainage of the abdomen to the superior vena cava (SVC), bypassing the IVC altogether [13]. If however, an anatomical variant is present in a patient with this pre-existing condition, this collateral system is compromised and further intervention could be required.

Although a routine dissection technique was used in our research, an alternative method has been documented using air dissection. Iwanaga et al. also described a novel technique in vein dissection in which air was insufflated first in the IVC and then its tributaries. They noted a case in which the right internal iliac vein was only visualized using air dissection rather than classic methods [15]. Use of air dissection enhances the detection of anatomical variants and could potentially lead to more-efficient diagnosis and disease prevention.

We present a variation in which the right common iliac vein is absent along with the right internal iliac vein feeding into the contralateral common iliac vein. It is important that we document such venous anomalies in order to prevent the exacerbation of disease states and aid in interventional procedures.

© Copyright 2019
Mehta et al. This is an open access article distributed under the terms of the Creative Commons Attribution License CC-BY 3.0., which permits unrestricted use, distribution, and reproduction in any medium, provided the original author and source are credited.