Ventriculoperitoneal (VP) shunt placement is one of the more common procedures in neurosurgery and has a variety of indications. However, shunt placement can be associated with multiple complications, one of which is proximal and distal shunt migration. There have been reported cases of migration of the distal end of a VP shunt from the intraperitoneal cavity into different organs resulting in a variety of complications. Most of the reported cases are the result of spontaneous migration. However, shunt catheter migration could be iatrogenic as well. We present a case of intragastric VP shunt migration in a patient following placement of a percutaneous endoscopic gastrostomy tube.

Ventriculoperitoneal (VP) shunt placement is a common procedure for the treatment of hydrocephalus. Bowel perforation is a rare complication associated with shunt catheter migration with an incidence of only 0.1% to 0.7% [1]. The colon is the most common site of bowel perforation [2-3]. Intragastric catheter migration is extremely rare with only a few reported cases [4-6]. Significant morbidity and mortality are associated with shunt migration; therefore, prompt diagnosis and treatment are critical.

An 84-year-old male resident of a nursing home facility of Hispanic descent was brought to our emergency department (ED) for respiratory distress and altered mental status. He was intubated promptly on arrival to the ED. His past medical history was significant for intracranial aneurysm with bleeding following VP shunt placement, ischemic stroke with aphasia and paraplegia, and percutaneous endoscopic gastrostomy (PEG) tube placement. His vital signs and clinical laboratory results are presented in Table 1.

The clinical picture was suggestive of septic shock. We ordered a sepsis workup including two sets of blood cultures and urine culture. The patient was treated with aggressive intravenous fluid hydration and broad-spectrum antibiotics (vancomycin and meropenem).

A non-contrast computed tomography (CT) of the chest, abdomen, and pelvis revealed bibasilar pulmonary atelectasis without focal infiltrate and the presence of a right-sided VP shunt catheter traversing the right neck, the right chest, and the right abdominal wall; the tip of the catheter was located within the gastric lumen and had likely entered through the PEG tube insertion site (Figures 1-2). The PEG tube was outside the gastric lumen, terminating in the abdominal wall that was evidenced in the repeat CT scan confirmed that patient had abdominal wall cellulitis and localized abscesses around the PEG tube insertion site (Figure 3). Medical records from another facility confirmed previously normal positioning of the PEG tube and normal intraperitoneal positioning of VP shunt catheter one year prior. 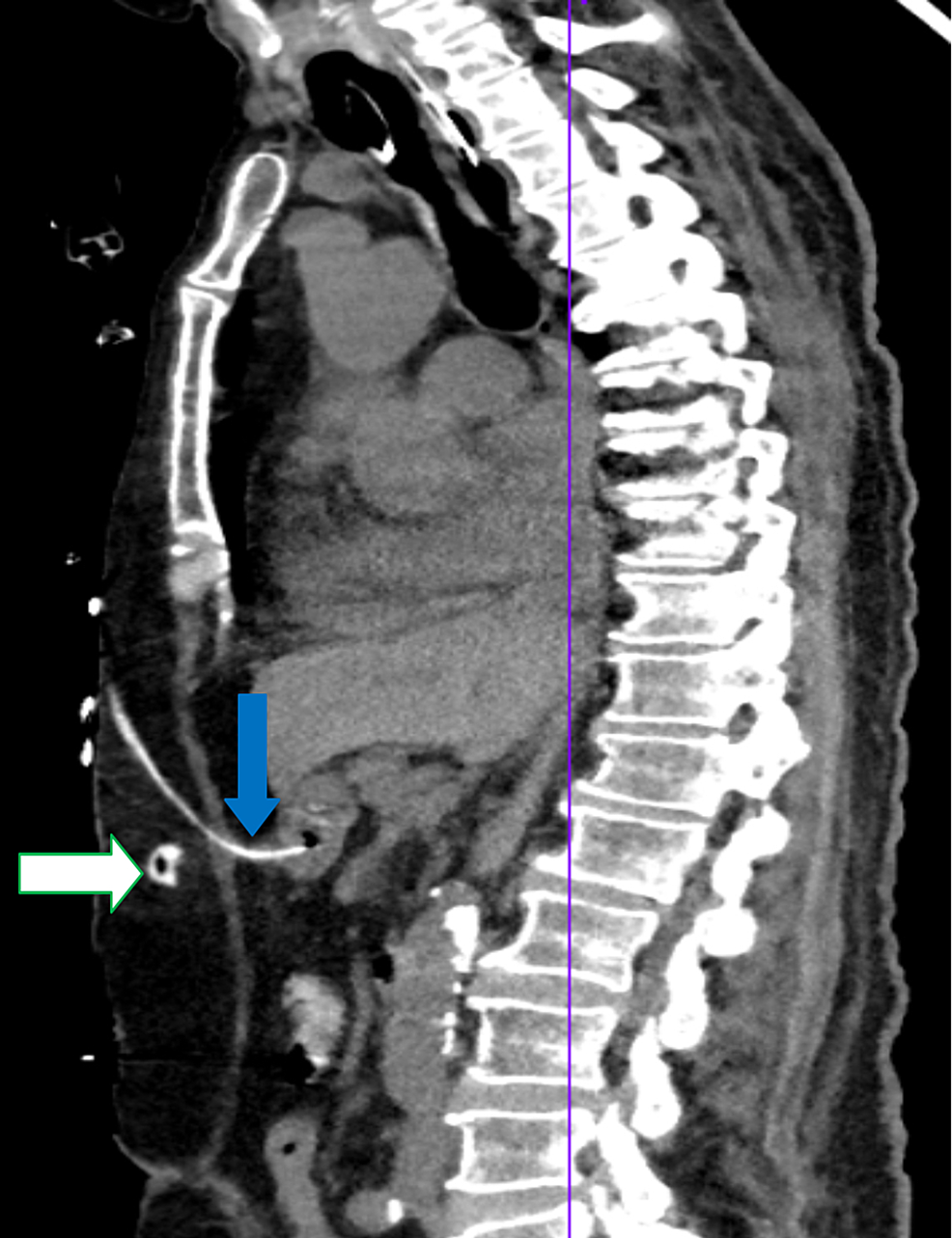 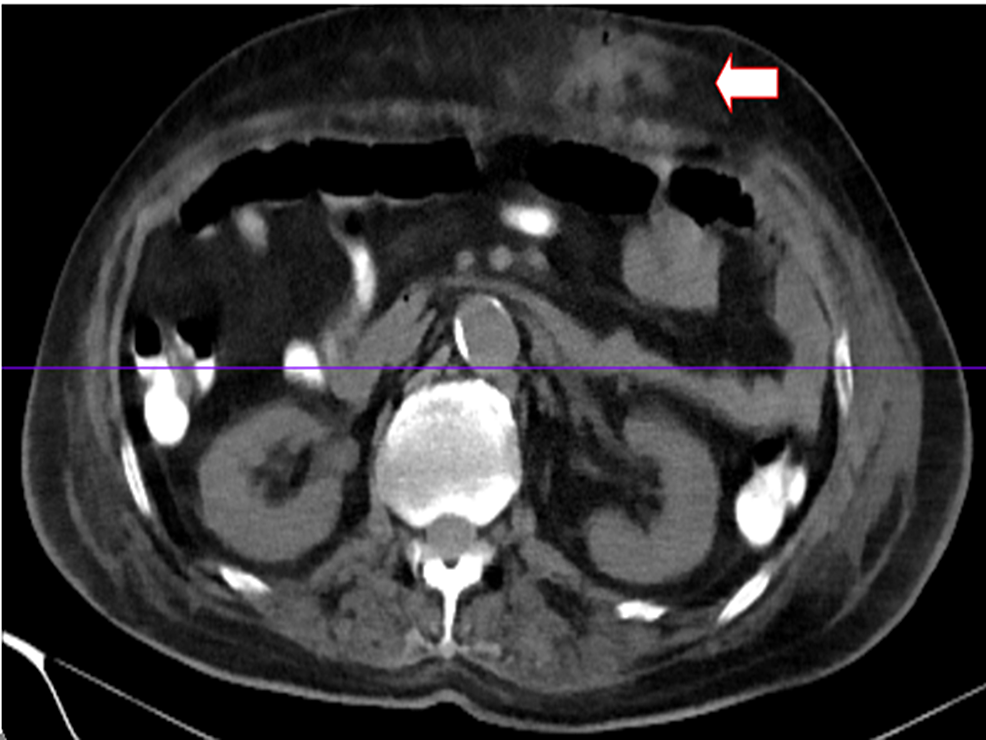 Given the malposition of the VP shunt inside the gastric lumen, we suspected VP shunt infection or meningitis/encephalitis and subsequently lumbar puncture was performed; the results of the cerebrospinal fluid (CSF) analysis were unremarkable. Blood cultures and urine culture results were negative.

The wound culture was positive for Proteus mirabilis sensitive to carbapenems and piperacillin/tazobactam. We debrided the abdominal wall and drained the abscess. Intravenous antibiotic coverage was continued according to the sensitivity testing, and patient received intravenous meropenem for a total of 10 days with good clinical outcome.

Esophagogastroduodenoscopy revealed a small lumen catheter, likely the VP shunt, entering into the gastric lumen proximal to the incisura angularis; this was identified as the previous PEG tube insertion site (Figure 4). The catheter tip was found in the fundus of the stomach. We also noted frank purulent drainage from the PEG insertion site (Figure 5). 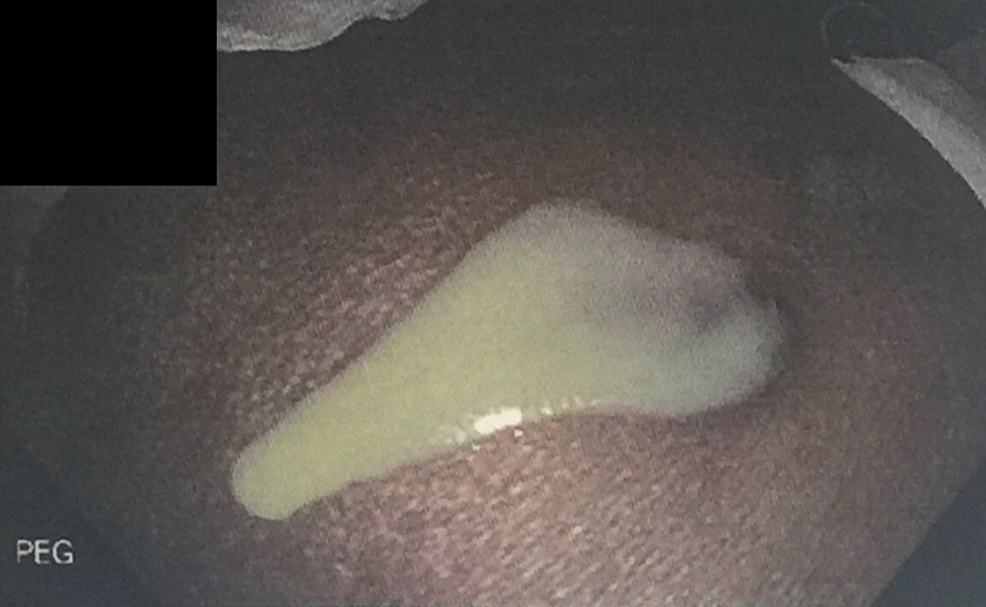 Once stabilized, the patient was transferred to a higher center of care for neurosurgical evaluation with proper positioning and removal of the VP shunt. The patient underwent shunt catheter removal from the stomach lumen followed by repositioning of the PEG tube. The neurosurgery team decided against reinsertion of the VP shunt.

The patient was followed up at six months from the time of discharge, and his PEG tube was functional and also he didn't develop worsening of hydrocephalus.

To our knowledge, there are only 10 published case reports of gastric perforation by the VP shunt [4-6]. The proposed pathophysiology is that the interaction of the catheter tip with the bowel wall leads to local inflammatory changes and fibrosis causing catheter adhesion to the bowel and delayed perforation with gradual advancement of the catheter inside the lumen [6]. Silicone allergy leading to foreign body reaction may be an alternate mechanism for bowel wall penetration as is infection and manipulation of the bowel during surgery [10]. Unlike previous cases, the likely mechanism of VP shunt migration in our patient was dislodgment of the older PEG tube from the stomach into the abdominal wall, allowing VP shunt migration through intragastric PEG tube tract [4].

The usual presentation of intragastric migration is abdominal pain and gastrointestinal bleeding associated with stomach wall perforation [4-5]. A high degree of clinical suspicion is warranted for diagnosis as only approximately 25% of the patients present with the signs of peritonitis [11]. Intracranial infections such as meningitis caused by enteric organisms like E. coli in patients who have undergone previous VP shunt placement should also be investigated for possible shunt migration [12]. The diagnosis is made via radiography (e.g., CT) of the abdomen and pelvis. Upper gastrointestinal endoscopy could be done to determine the specific site of perforation for surgical management [2-3].

Catheter migration is managed both conservatively and surgically. In cases of uncomplicated migration with no peritoneal signs or evidence of CSF infection, the catheter could be left alone and observed as the presence of fibrous sheath around the catheter could prevent leakage of CSF or retrograde flow of gastric contents into the shunt catheter [2,6]. Surgical options for distal catheter management include endoscopic clipping of the distal catheter, direct repair of the stomach wall by laparotomy, and injection of fibrin glue into the catheter tract to repair the perforation [2,4,6]. In our case, the displaced PEG tube was removed followed by neurosurgical removal of the shunt catheter. Appropriate coverage with antibiotics is essential because shunt migration associated with bowel perforation has a very high chance of catheter infection and meningitis with subsequent high mortality.

Intragastric migration of a VP shunt is a very rare complication and can be spontaneous or iatrogenic. As in our case, PEG tube placement in these patients may be associated with shunt migration, and the risk of catheter migration needs to be taken into consideration while placing PEG tubes.

© Copyright 2019
Sidhu et al. This is an open access article distributed under the terms of the Creative Commons Attribution License CC-BY 3.0., which permits unrestricted use, distribution, and reproduction in any medium, provided the original author and source are credited.

Now You See, Now You Don’t: A Case Of Spontaneous Regression of Pituitary Tumour