During the routine cadaveric dissection of a fresh-frozen cadaveric neck we identified a variant right superior root of the ansa cervicalis. The cadaver was a Caucasian female whose age at death was 77 years. The superior root of the ansa cervicalis was formed by two distinct branches: one descending from the HN and one arising from the vagus nerve at the level of C3 vertebra. Both branches descended along with the anterior wall of the carotid sheath and united to form the common superior root at the level of the common carotid artery bifurcation. The inferior root was formed by the ventral rami of the second and third cervical spinal nerves and descended to form a loop together with the superior root; as a result, the ansa cervicalis consisted of two loops. Nerve supply to the sternothyroid and omohyoid from the ansa cervicalis was observed. Both roots were located deep to the IJV (Figure 1). No other anatomical anomalies or previous surgical scars were found in the dissection area. 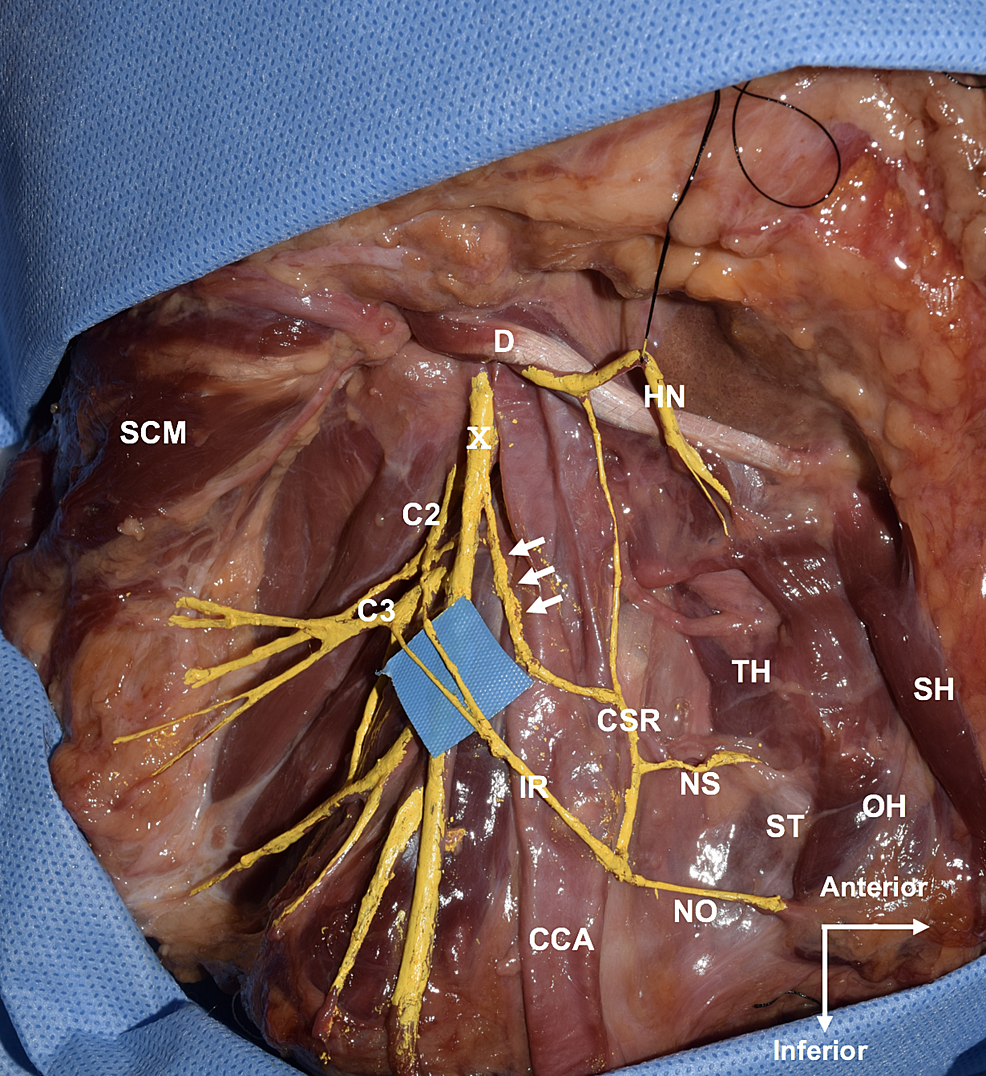 Rath and Anand reported the absence of the ansa cervicalis with the innervation of the infrahyoid muscles being replaced by a branch of the vagus nerve in one case of 400 cadavers [6]. The variant formation was termed a “vagocervical plexus” or “vagocervical complex” [6-7]. In the present case, the common superior root was formed by the descendens hypoglossi and the branch from the vagus nerve, which joined the inferior root formed the ansa. To our knowledge, only two cases of a vagal contribution to the superior root have been reported [10,13]. Nayak et al. [10] proposed that this formation be called a “descendens vagohypoglossi.” In the present case, the descending branch from the vagus nerve might have “hitchhiked” via the C1-C2. Although the diameter was not measured, the contribution from the vagus nerve to the common superior root seems to be larger than that of the hypoglossal nerve. The vagus nerve might have communicating branches with C1 and/or C2 proximally, which might compensate for the smaller contribution from the hypoglossal nerve. Previous authors have mentioned that the branch from the vagocervical plexus compensates for the nerve supply to the infrahyoid in cases where the ansa cervicalis is absent [7]. This variant of the ansa cervicalis is extremely rare, but knowledge of its existence is necessary during the operations in this area as for example, unintended traction on the vagus nerve could occur with dissection of the ansa cervicalis.

© Copyright 2019
Kikuta et al. This is an open access article distributed under the terms of the Creative Commons Attribution License CC-BY 3.0., which permits unrestricted use, distribution, and reproduction in any medium, provided the original author and source are credited.