Hepatic encephalopathy (HE) is a common cause of hospital admission in patients with liver cirrhosis (LC). The aims of this study were to evaluate the precipitant factors and analyze the treatment outcomes of HE in LC.

All the LC patients admitted between February 2017 and January 2018 for overt HE were analyzed for precipitating factors and treatment outcomes. Treatments were compared among three treatment groups: receiving lactulose, lactulose plus L-ornithine L-aspartate (LOLA), and lactulose plus rifaximin. The primary endpoints were mortality and hospital stay. The chi-square test was used to compare the different treatment outcomes with hospital stay and mortality with significance at p<0.05.

Infection, especially spontaneous bacterial peritonitis, was the commonest precipitating factor of HE. The combination of lactulose either with LOLA or rifaximin is equally effective in improving HE and reducing the duration of hospital stay than lactulose alone.

Liver cirrhosis (LC), the final pathway for a wide variety of chronic liver diseases, is a pathologic entity defined as diffuse hepatic fibrosis with the replacement of the normal liver architecture by nodules [1]. Hepatic encephalopathy (HE) is a well-recognized clinical complication of LC and the presence and prompt identification of well-defined precipitating factors are extremely important in the diagnosis and treatment of this fatal condition.

HE develops in 50% to 70% of patients with cirrhosis, and its occurrence is a poor prognostic indicator, with projected one- and three-year survival rates of 42% and 23%, respectively, without liver transplantation [2].

Lactulose is commonly used in the treatment of HE, however, there is increasing evidence of add-on therapy with rifaximin. Additionally, there is no study conducted using L-ornithine L-aspartate (LOLA) plus lactulose with lactulose alone in our knowledge. We aimed to study the different combinations of these drugs in our population with lactulose in all the three groups as a standard of care.

A descriptive, cross-sectional, single-center study was carried out on 132 consecutive patients of HE admitted to the department of gastroenterology and liver unit at National Academy of Medical Sciences, Bir Hospital, Nepal, between February 2017 and January 2018. All patients ages ranging from 18 to 75 years with LC with HE type C, irrespective of the etiology of LC, were enrolled while LC patients with intractable HE or other identifiable brain lesions, LC with other co-morbid conditions, and death within 24 hours were excluded from the study.

Blood samples were sent for complete blood count, random blood sugar, liver function tests, renal function tests, serum albumin levels, hepatitis B virus (HBV), anti-hepatitis C virus (anti-HCV), human immunodeficiency virus (HIV), coagulation profile, urine analysis, and blood cultures. Findings of abdominal ultrasound, including liver and spleen size, parenchymal echogenicity, portal vein diameter, and ascites were noted. An ascitic tap was done in all patients with ascites and sent for a detailed report and culture in order to diagnose infection on ascites. Urine routine and culture were also sent in all patients, along with blood culture, in order to diagnose any infection. A chest X-ray was done in all patients on arrival at the hospital. Non-contrast computed tomography (CT) head was also done to exclude intracranial lesions, especially bleed. All other supportive investigations were done as and when needed.

Patients also received other standard treatments according to their need, which included antibiotics according to the sensitivity of the culture report, electrolyte correction, and control of gastrointestinal bleed (GIB) by vasopressin analogs (octreotide or terlipressin) as initial medical management before definitive therapy with endoscopy was performed.

The data obtained from the study were analyzed using Statistical Package for Social Studies (SPSS) version 17 (IBM Corp., Armonk, NY, US). For a comparison of categorical variables, the chi-square test, independent t-test, and bivariate and multivariate analyses were used to compare the results of various parameters among the studied patients. Values were expressed as mean ± SD, a 95% confidence interval was taken, and p-values of <0.05 were considered statistically significant.

A total of 140 consecutive patients with LC and HE were enrolled. Of these, eight patients were excluded because of significant systemic illness (acute respiratory distress syndrome (ARDS), septic shock) and two patients did not give consent. Finally, 132 (n=132) cases were included in the study, as shown in the flow chart in Figure 1. 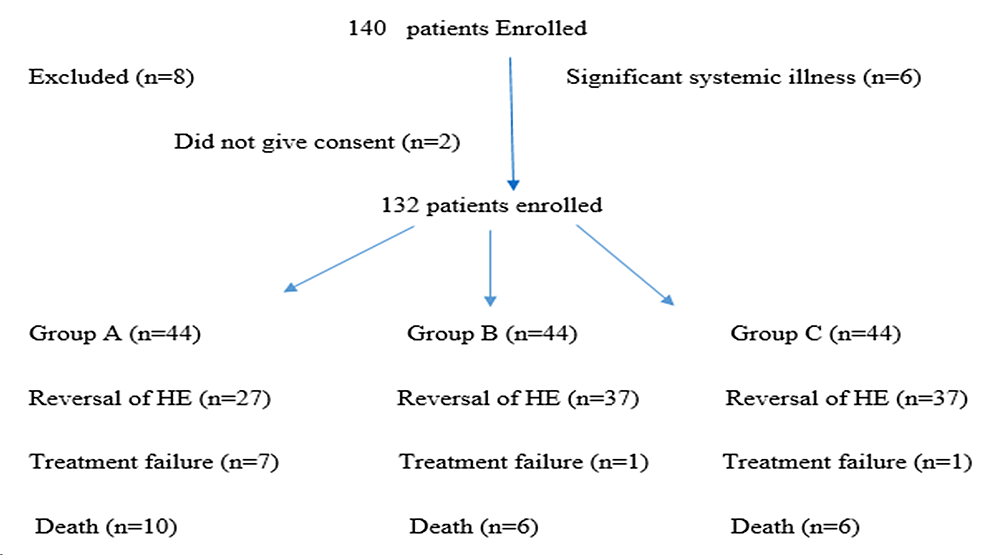 Figure 1: Flowchart on types of cases included in the study 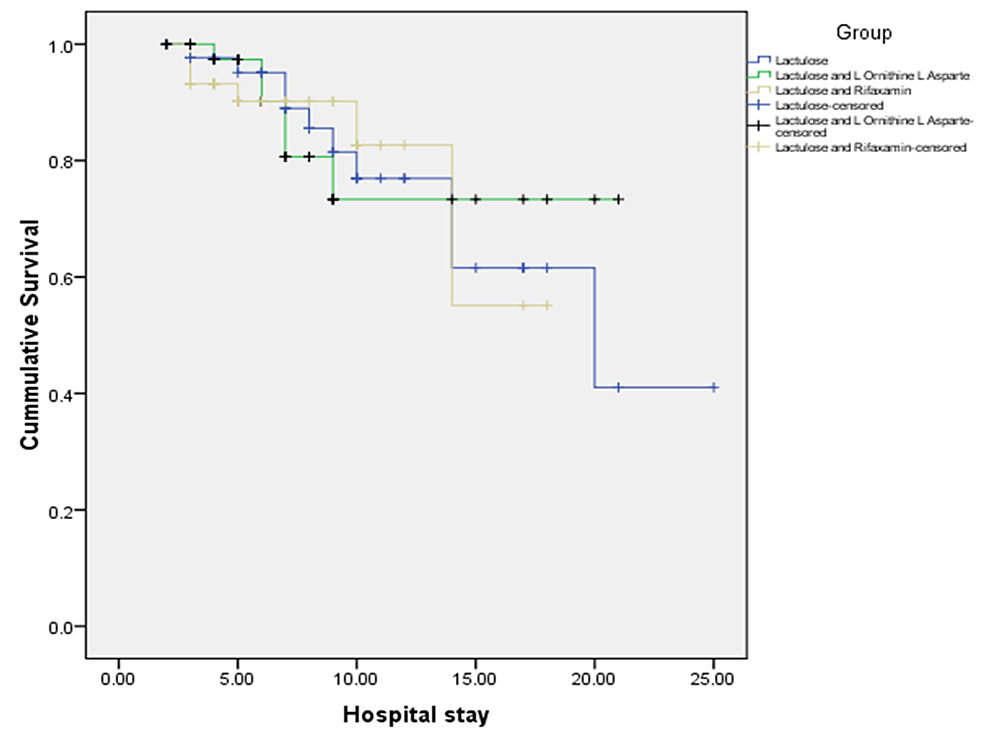 Figure 2: Kaplan–Meier survival curve for the three treatment groups during the hospital stay

In group A, 27 (61.4%) patients fully recovered from HE with lactulose only, in group B, 37 (84.1%) patients fully recovered from HE with lactulose and LOLA, and in group C too, 37 (84.1%) patients had a complete reversal of HE. This difference was statistically significant (p=0.017). There was a decrease in mortality in the lactulose plus rifaximin group and lactulose plus LOLA group with six (13.6 %) each in groups A and B vs. lactulose alone 10 (22.7%) with p-value <0.269. Out of 132 patients enrolled in our study, mortality was seen in 22 (16.7%) patients, and it was found that the mortality rate was signiﬁcantly higher in child class C patients.

The identification and treatment of the precipitating factor is the most important aspect of the management of acute HE since symptoms of overt HE are debilitating and lead to non-adherence to a therapeutic regimen, which, in turn, leads to severe symptoms, frequent hospitalizations, and poor quality of life [4].

There had been some differences in the common precipitation factors across the studies. SBP was the most common precipitating factor reported in our study. This was consistent with a study done in Pakistan by Mumtaz et al. and Abid et al. who reported SBP as the most common precipitant in HE [5-6]. Our finding is, however, contradicting studies done in the USA by Souheil et al., who observed that infections were responsible in only 3% of cases. This could be related to adherence to therapy and regular monitoring of patients with LC in the USA, which resulted in early detection and treatment of infections [7].

In our study, we observed electrolyte imbalance to be present in 41% patients, and among electrolyte disorders, hyponatremia was much more common than hypokalemia in our patients, which was in agreement with other studies, such as Abid et al. and Alam et al. [6-8].

Lactulose, a non-absorbable disaccharide inhibiting intestinal ammonia production by lowering the colonic pH, is currently recommended as the first-line pharmacological treatment for HE [13]. In our study, only 61.4% of patients fully recovered from HE with lactulose alone and 22.7% had mortality. LOLA, a stable salt of the natural LOLA and aspartic acid, has been shown to improve HE [14]. Abdo-Francis et al. observed that treatment with LOLA was more effective than lactulose in improving HE, which is similar to our study [15]. However, in our study, we used LOLA plus lactulose in group B in which 84.1% of patients reverted back to normal. Only 2.3% of patients had treatment failure and 13.6% of patients died in the lactulose plus LOLA group. To our knowledge, there are no other studies comparing the combination of LOLA and lactulose with lactulose alone. Therefore, more studies are required to derive optimal results. However, LOLA infusion appears to be a safe and effective treatment of HE in our study.

Our study showed the superiority of rifaximin plus lactulose therapy over treatment with lactulose alone. We found that recovery from HE was 84% in group C, which is similar to the study done by Sharma et al., which showed that the combination of lactulose plus rifaximin is more effective than lactulose alone in the treatment of overt HE [16]. The risk of bacterial resistance appears to be lower with rifaximin than with systemic antibiotics. The plasma levels of rifaximin are negligible; therefore, bacteria outside the gastrointestinal tract are not exposed to appreciable selective pressure [17]. Thus, Rifaximin may be used in the long term or can be used several times during overt HE.

The limitations of our study include it involving a single center and the small sample size. Further, large-scale, multicenter trials should be evaluated using robust clinical outcomes.

Infection, especially SBP, is the commonest precipitating factors of HE followed by electrolyte imbalance, constipation, and GIB. The combination of lactulose either with LOLA or rifaximin is equally more effective in improving HE and reducing the duration of hospital stay than lactulose alone.

© Copyright 2019
Poudyal et al. This is an open access article distributed under the terms of the Creative Commons Attribution License CC-BY 3.0., which permits unrestricted use, distribution, and reproduction in any medium, provided the original author and source are credited.

Figure 1: Flowchart on types of cases included in the study

Figure 2: Kaplan–Meier survival curve for the three treatment groups during the hospital stay