Klippel Trenaunay syndrome (KTS) is a rare, sporadic congenital syndrome characterized by cutaneous hemangiomas, venous varicosities, and osseous-soft tissue hypertrophy of the affected limb. It is genetically heterogeneous, and its clinical presentation is variable.

We report the case of a 13-year-old male with KTS, who presented with a cerebral cavernous angioma in the corpus callosum. To the best of our knowledge, this is the first reported case of its kind from Pakistan and the only known case in the literature of KTS to be treated with stereotactic radiosurgery.

The possibilities of shared genetic pathways between KTS and cavernous angiomas and the need for neurovascular scrutiny in patients with this syndrome are discussed.

Klippel Trenaunay syndrome (KTS, OMIM 149000) is a rare congenital mesodermal phakomatosis characterized by a triad of 1) capillary malformations, 2) venous malformation or widespread early-onset varicose veins, and 3) osseous or soft tissue hypertrophy of the affected limb [1-2]. The presence of two of the three cardinal features is sufficient to diagnose KTS [3]. Vascular anomalies in KTS are the slow flow type. Klippel-Trenaunay-Weber syndrome (KTWS) with fast flow vascular malformation, such as an arteriovenous fistula, is called Parkes Weber syndrome [4].

The clinical presentation of the syndrome is diverse and depends upon the site of malformation, from patients who have cosmetic concerns to patients with life-threatening conditions, such as deep vein thrombosis (DVT), pulmonary embolism (PE), cellulitis, lymphedema, and internal bleeding from diseased vessels [5].

We describe the only known case in the literature of KTS associated with cavernous angioma to be treated with Gamma knife radiosurgery and draw attention to the evidence of a shared genetic pathway between the two conditions.

A 13-year-old boy, a diagnosed case of KTS, was referred to our hospital with complaints of vertigo for three months. His previous medical history included an intracranial bleed for which he was hospitalized four years ago. There was no history of surgery or radiotherapy. He was born at term after an uncomplicated pregnancy. His developmental milestones were normal. His family history did not show any precedent occurrence of cavernomas, intracerebral hemorrhage, or KTS.

His general physical examination revealed left upper and lower extremity hemihypertrophy and cutaneous angiomatosis of the lower extremities, which were associated with painless varicose veins (Figure 1). Multiple cutaneous port-wine stains with telangiectasia were also observed in the left hand, left anterior chest, and the entire back, which had been evident since birth (Figures 2-3). There was no evidence of syndactyly, polydactyly, congestive cardiac failure, and pulmonary hypertension. No focal neurological deficits were present. 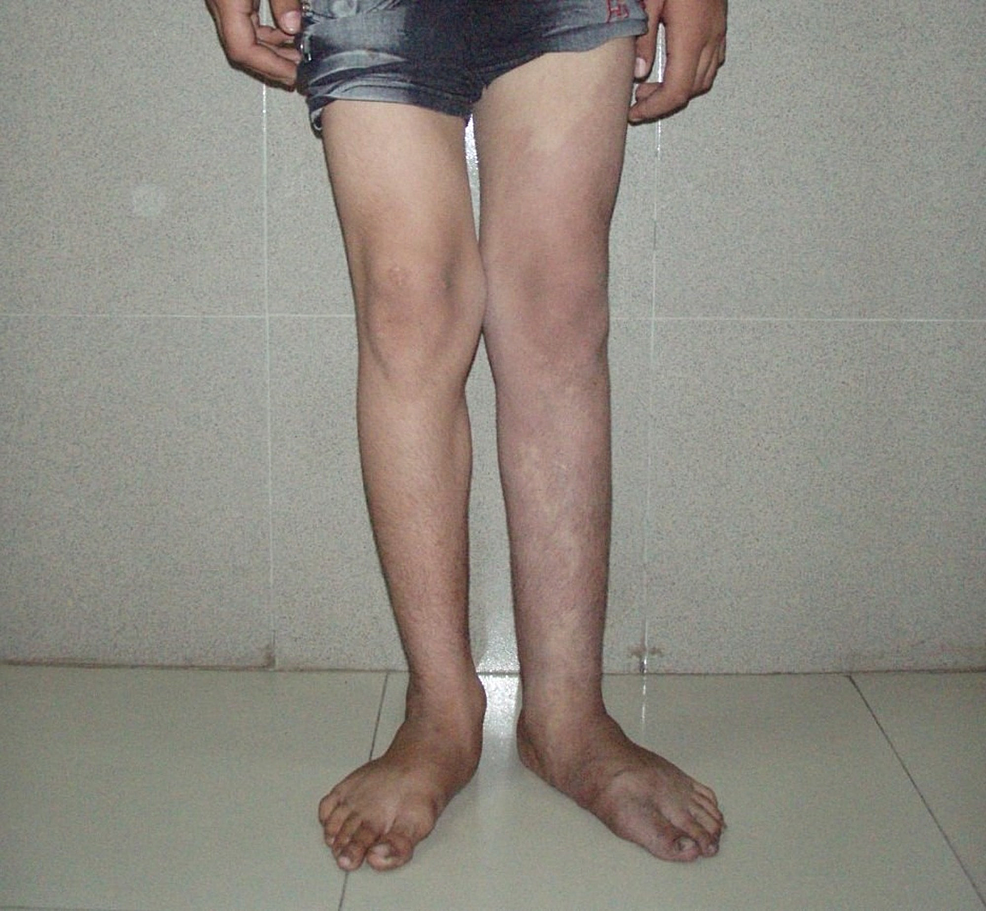 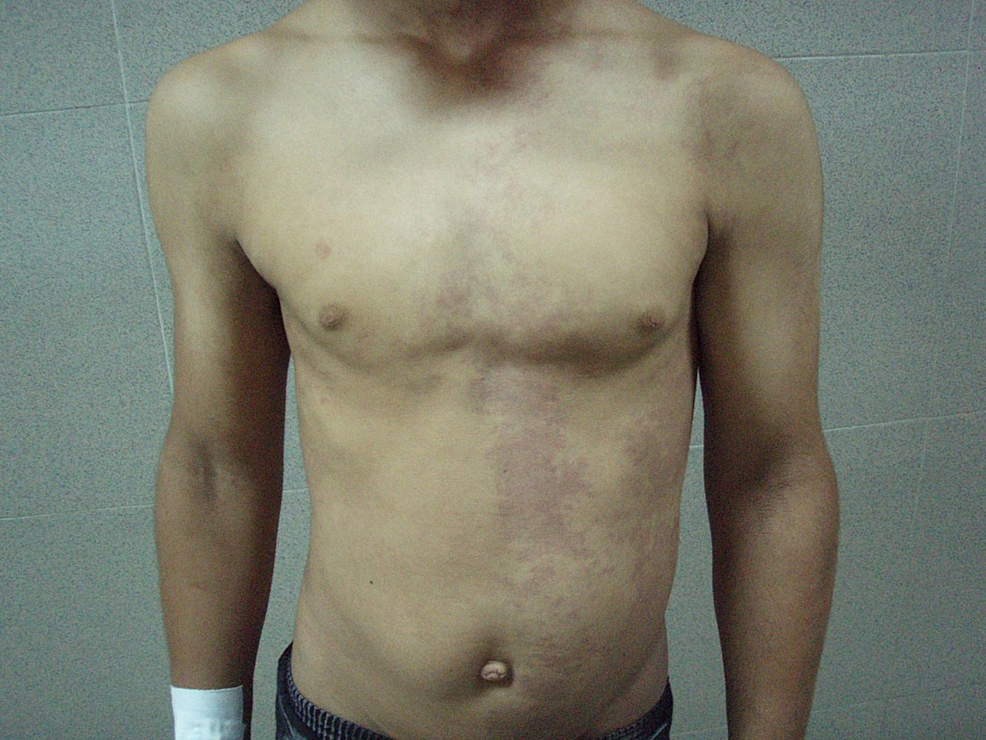 Figure 2: Multiple cutaneous port-wine stains on the left side of the anterior trunk. 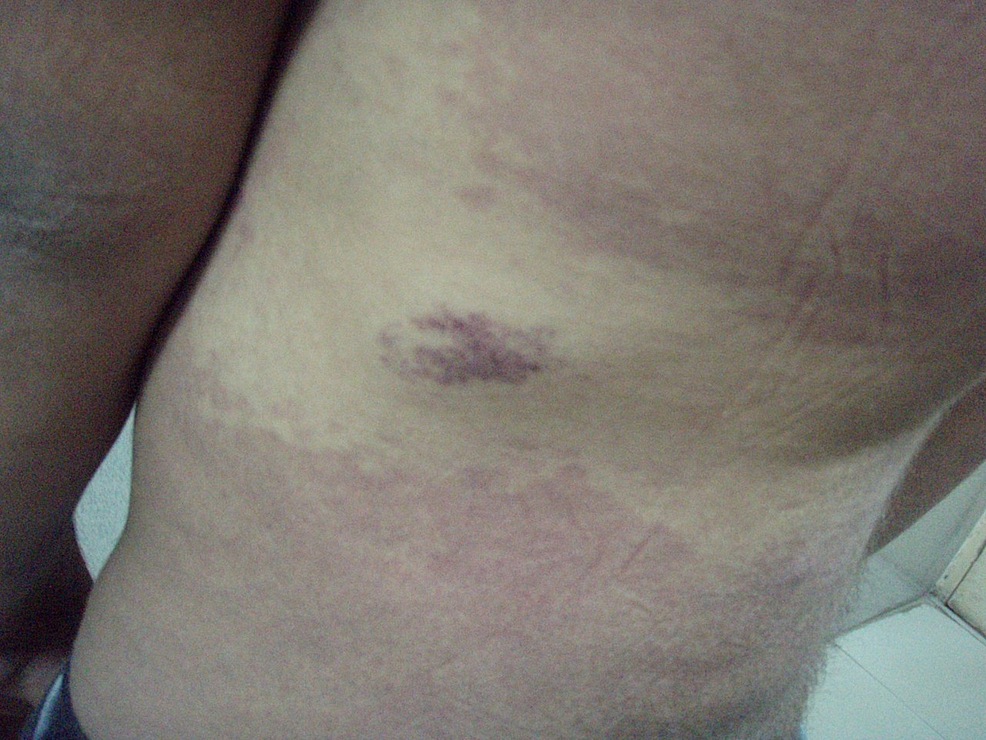 Figure 3: Multiple cutaneous port-wine stains with telangiectasia on the left side of the posterior trunk. 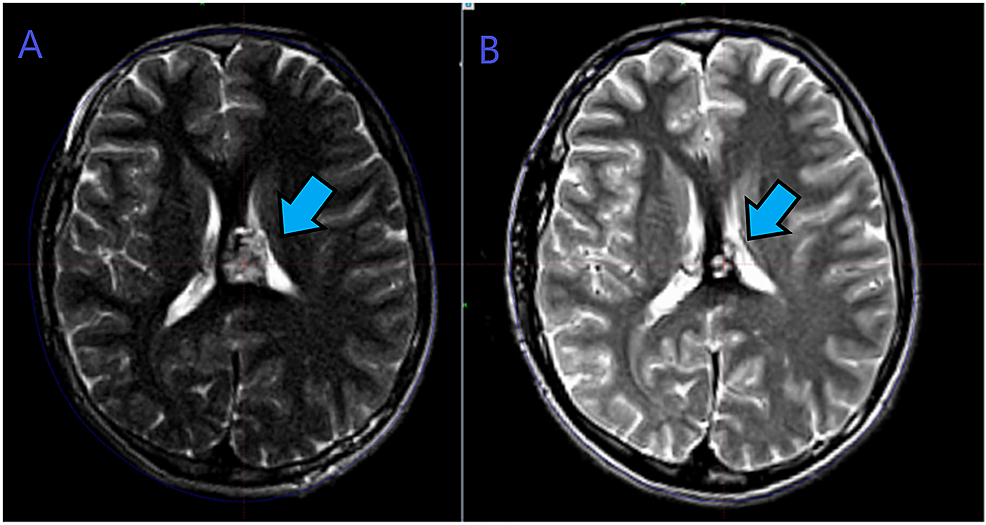 KTS is a congenital vascular disease characterized by extensive malformations involving capillaries (98%), veins (72%), and lymphatics (11%). Overgrowth of the affected limb is seen in 67% of the patients [3,6].

Common complications in KTS are caused by vascular anomalies in the patients’ extremities, such as ulceration, cellulitis, thrombophlebitis, thrombosis, emboli, hemorrhage, and edema. The most frequent CNS disorder found in KTS is hemimegalencephaly. Various other CNS anomalies have been reported such as spinal and cerebral arteriovenous malformation, orbitofrontal varices, multiple aneurysms, carpel tunnel syndrome, epidural and intradural angiomas, cerebral venous thrombosis, and intracranial hypertension secondary to the inadequacy of superficial cortical veins [4].

Unlike other neurocutaneous disorders, such as tuberous sclerosis and neurofibromatosis, neoplasias are infrequent, with orbital rhabdomyosarcoma, meningiomas, astrocytomas, and limb sarcomas reported most commonly. CNS cavernomas are also rarely associated with KTS and, recently, there have been several reported cases.

Table 1: Summary of cases of KTS with CNS cavernomas.

KTS most commonly occurs sporadically following a somatic mutation, with a "second hit" model used to explain its etiology [12-13]. However, the disease can affect other family members, suggesting an autosomal dominant inheritance [14]. The activation of AGGF1 and mutations in PIK3CA have been reported to explain the pathogenesis of the syndrome [15]. A mutation in E133K, AGGF1 is a functional mutation that increases angiogenesis by the gain-of-function mechanism [6]. Furthermore, the RASA1 gene mutation was discovered to be involved in the pathogenesis of KTWS [16]. RASA1 codes for p-120-RasGAP, a protein that downregulates the MAPK signaling pathway, which mediates cellular growth, differentiation, and proliferation. It also binds to Rap1a, a member of the RAS superfamily involved in integrin-mediated cellular adhesion [17-18].

Familial cerebral cavernous angiomas are caused by loss-of-function mutations in the KRIT1 gene, which is also a binding partner of Rap1a [19-20]. Since both RASA1 and KRIT1 genes interact with the Rap1a protein, this suggests the possibility of a shared genetic pathway between KTWS and cavernous angiomas. While further studies are needed to establish a strong association between the two conditions, in light of these genetic links and the growing number of cases being reported, patients with KTS may need to undergo screening neurological imaging to rule out a possible cavernoma.

Our patient, a 13-year-old boy with Klippel-Trenaunay syndrome, who had a history of intracranial bleed that was initially managed conservatively, presented to us with complaints of vertigo. Further investigations revealed a cavernous angioma in the corpus callosum, which was treated with Gamma Knife radiosurgery, and follow-up MRIs showed good lesional control. This is the first reported case of a cavernoma associated with KTS to be treated with radiosurgery.

Taking into account the latest model of genetic development described for KTS and its overlap with the pathogenesis of cavernomas as well as the increasing number of cases being reported, the importance of neurovascular scrutiny in patients with KTS cannot be ignored, as it may help prevent devastating complications such as intracranial bleed.

We wish to express our sincere gratitude to Prof. A Sattar M Hashim,Consultant Neurosurgeon and executive director at NCCI Karachi, for his guidance and support in carrying out this project work.

Figure 2: Multiple cutaneous port-wine stains on the left side of the anterior trunk.

Figure 3: Multiple cutaneous port-wine stains with telangiectasia on the left side of the posterior trunk.

Table 1: Summary of cases of KTS with CNS cavernomas.