Kikuchi-Fujimoto disease (KFD), or necrotizing histiocytic lymphadenitis, is a rare cause of lymphadenopathy and fever. Although the clinical course is usually benign, KFD is often mistaken for malignancy or infection. Recognition of typical and atypical cases of KFD is necessary to avoid unnecessary interventions. Here we report an atypical presentation of KFD with diffuse lymphadenopathy and leukocytosis associated with high levels of circulating Epstein-Barr viral DNA.

The etiology of KFD is controversial. Some authors speculate that viral and autoimmune processes influence the development of KFD [4-5]. It generally resolves in one to four months, but has been associated with subsequent development of systemic lupus erythematous (SLE) [3, 5-6]. Excisional lymph node biopsy with hallmark findings confirms the diagnosis [7-8].

A 20-year-old Caucasian female was admitted with one month of cervical lymphadenopathy and two months of fever, fatigue, night sweats, and 15-pound weight loss. A course of antibiotics two weeks prior did not improve her symptoms. A week prior to admission, she developed an intermittent diffuse urticarial rash.

Medical history was significant for poorly controlled type II diabetes and chronic pain. She was allergic to sulfa drugs and latex. Family history was unknown. She denied travel, drug and alcohol use, and sexual activity.

On presentation, the patient was febrile to 38.6oC, with a heart rate of 135 beats per minute, respiratory rate of 18 breaths per minute, and blood pressure of 115/85 mmHg. Examination was remarkable for diffuse, rubbery lymphadenopathy (0.5 cm × 1 cm–3 cm × 3 cm). A faint erythematous, reticular rash was present on her legs. 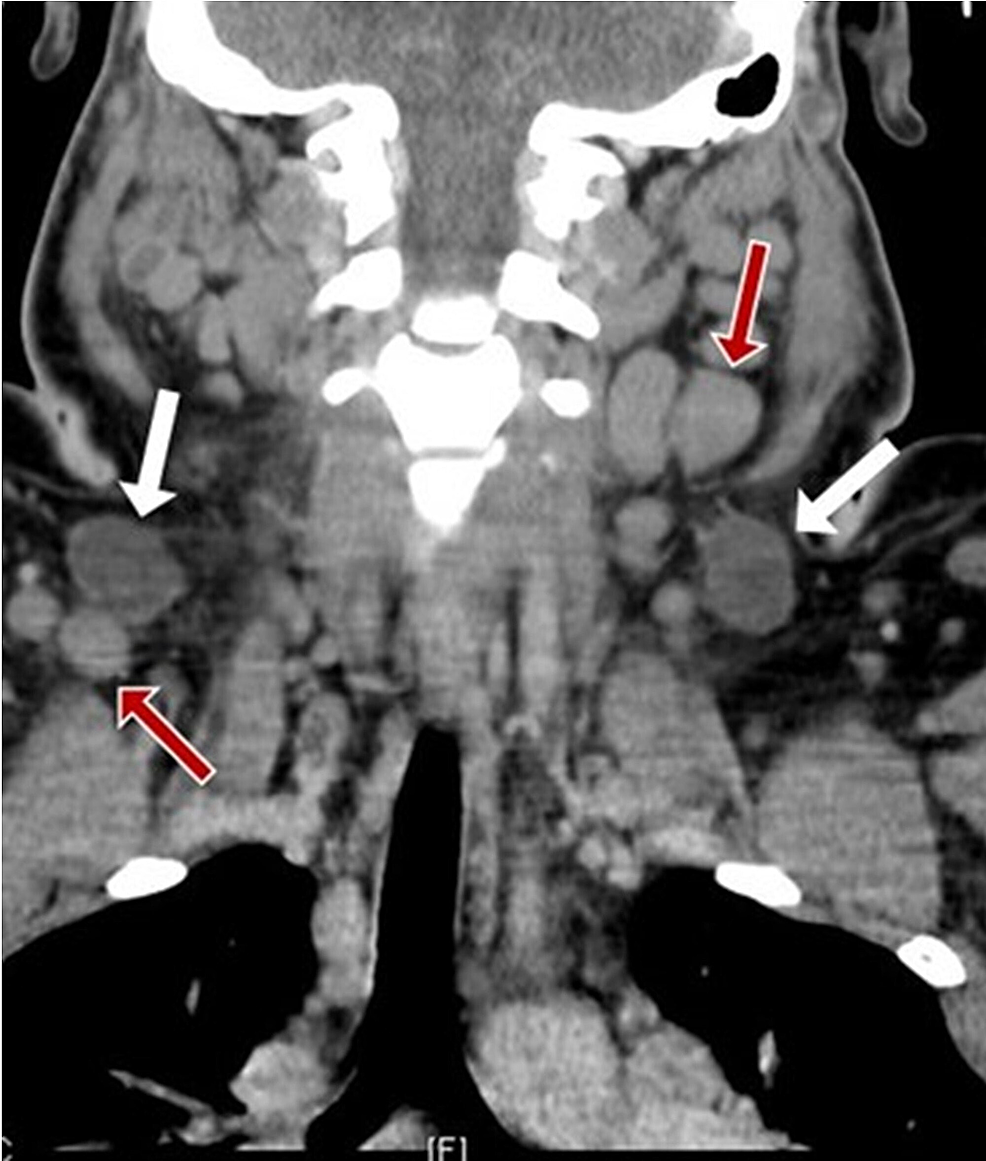 Figure 1: Computed tomography (CT) of the neck and chest. 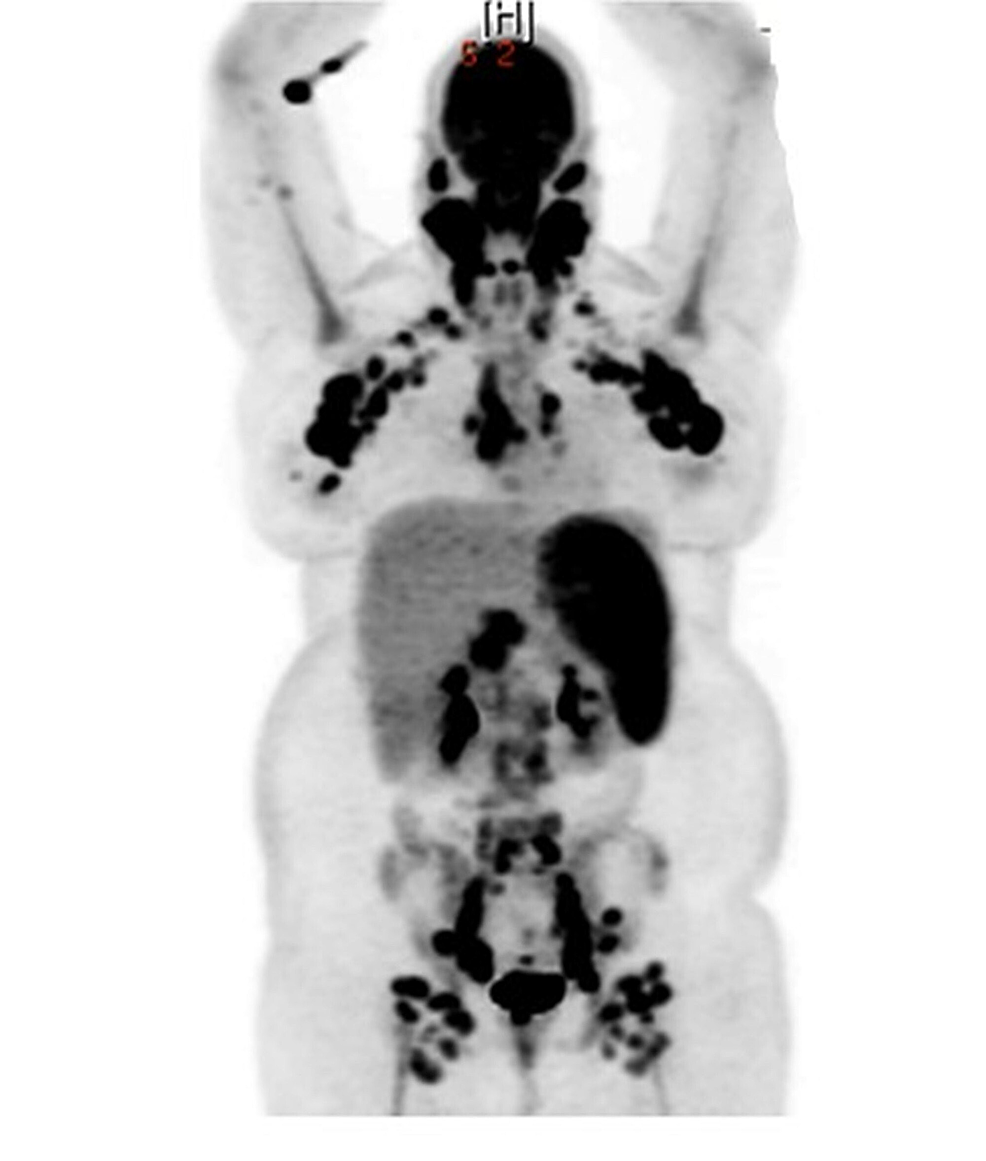 Widespread hypermetabolic bulky lymphadenopathy. Standardized uptake values (SUVs) ranged from 9.9 to 15.0. Mild diffuse bone marrow uptake was present, but no hypermetabolic osseous lesions were identified. Spleen appeared to be involved with SUV up to 7.0. 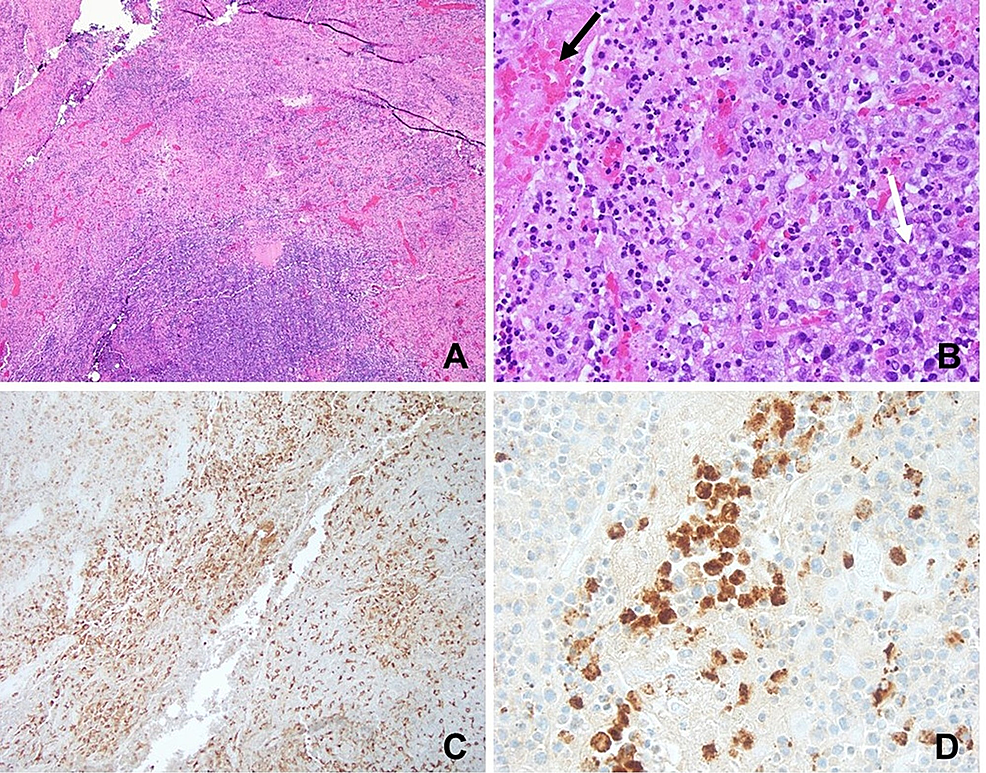 There was no eosinophilic or neutrophilic infiltrate, or evidence of malignancy on biopsy or flow cytometry. Stains for acid-fast bacteria, fungi, herpes simplex virus, and cytomegalovirus were negative. Autoimmune workup was unrevealing (Table 3).

The patient’s hospital course was uneventful. She received three doses of ceftriaxone for urinalysis findings consistent with urinary tract infection and was treated symptomatically with analgesics and anti-histamines. The patient’s fever, rash, and lab abnormalities resolved spontaneously by day 5 of hospitalization and her lymphadenopathy decreased dramatically by discharge.

Our case highlights a unique presentation of KFD in the setting of EBV infection. Diffuse lymphadenopathy, while rare, has been reported. To our knowledge, KFD has not been associated with the degree of leukocytosis or plasma cells on biopsy seen in our patient. These findings coupled with high titer EBV PCR and negative ANA suggest that EBV influenced the development of KFD in our patient.

Although excisional lymph node biopsy is imperative for KFD diagnosis, clinical presentation and course support the diagnosis. KFD occurs most frequently in Asian populations, but has a worldwide distribution. KFD typically presents prior to the fourth decade, but there have been cases in pediatric and elderly populations. Female to male ratio ranges from 1:1 to 4:1, depending on the cohort [6, 8-11].

Common laboratory findings include elevated inflammatory markers, leukopenia/lymphopenia, anemia, atypical lymphocytes, thrombocytopenia, and increased lactate dehydrogenase and alanine aminotransferase. Leukocytosis has been reported in 2%-5% of cases [6, 9-10, 12]. To our knowledge, the degree of leukocytosis, especially the eosinophilia demonstrated by our patient, has not been reported (Table 4).

Reaching a diagnosis of KFD promptly is important to limit unnecessary interventions. KFD must be distinguished from other causes of lymphadenopathy and fever such as malignancy, autoimmunity (sarcoidosis, SLE, lupus lymphadenitis), and infection (EBV, HIV, tuberculosis, Bartonella, toxoplasmosis). Histological examination of an excised lymph node is the cornerstone of KFD diagnosis.

Tsang and colleagues concluded that the minimal diagnostic criteria for KFD include the presence of foci, histiocytes, and plasmacytoid monocytes with a paucity of neutrophils, overt infection, or malignancy [6, 8-9] . Lymphoid follicles or follicular hyperplasia can also been seen. Immunohistochemical stains demonstrate CD68+/myeloperoxidase (MPO)+ histiocytes, CD68+/CD123 plasmacytoid dendritic cells, variable CD8+ lymphocytes and immunoblasts [6-10].

The etiology of KFD remains controversial. Features of KFD suggest autoimmune or viral etiology. KFD shares many clinical and histopathologic features of a viral infection [6]. Although EBV, human herpesvirus 6, human herpesvirus 8, parvovirus B-19, herpes simplex, cytomegalovirus, and varicella zoster have all been suggested to play a role in KFD pathogenesis, no study has demonstrated clear causality [4, 10, 13-14]. EBV has been examined extensively. Some of the most convincing cases suggesting EBV induced KFD have been in children. Yen et al. describes a 6-year-old boy with diffuse lymphadenopathy, biopsy consistent with KFD, and evidence of active EBV infection based on PCR and immunoperoxidase staining. Others have found no significant difference in the number EBV infected cells in lymphoid tissues of those with KFD compared to controls [14-17]. Some postulate that the absence of EBV infected cells within the lymph nodes does not negate EBV involvement in KFD but rather supports a cytotoxic immune response to EBV infected cells resulting in KFD [15].

Lymph node histology in EBV lymphadenitis differs from that of KFD. Numerous polyclonal plasma cells, absent eosinophils, and CD30+ immunoblasts (seen in our patient) can be seen in EBV lymphadenitis. However, EBV lymphadenitis is associated with significant follicular hyperplasia, Reed Sternberg cells, and an inverted CD4:CD8 ratio [18-20]. In addition, prominent histiocytes and widespread karyorrhexis are not typical of EBV infection.

There are reports of SLE being diagnosed before, simultaneously, or after and KFD diagnosis [3, 5, 8, 10-11]. Interestingly, our patient had a negative ANA that turned positive. It is important to realize that a positive ANA can be seen in the general population and transient elevations are common following viral infections. Lupus lymphadenitis can be difficult to distinguish from KFD. However, the distinctive histiocytes and plasmacytoid monocytes of KFD are lacking in SLE. Plasma cells, hematoxylin bodies, and neutrophils are usually apparent in SLE, but minimal in KFD [7-8]. Our patient was atypical in that she had a significant number of plasma cells on biopsy. The absence of neutrophils, hematoxylin bodies, negative ANA, and self-resolving course make SLE an unlikely diagnosis. However, the association underscores the need for follow up in those diagnosed with KFD.

Given the rarity of KFD, identifying a clear cause is difficult. KFD is likely a transient autoimmune reaction triggered by a nonspecific viral infection in a genetically susceptible host. In our patient, high EBV viral load plus the typical pathological features of KFD suggests widespread necrotizing lymphadenitis triggered by EBV.

Kikuchi-Fujimoto disease is generally a benign self-limited disease with a recurrence rate of <5% [3, 6, 8-10, 12]. It is in this authors’ opinion that the benign nature of KFD is essential for diagnosis.

Kikuchi-Fujimoto disease is a difficult-to-diagnose disease characterized by fever, lymphadenopathy, specific biopsy findings, and benign course. Prompt diagnosis with excisional lymph node biopsy is imperative to diagnose and manage patients appropriately. Therapy is rarely indicated in KFD, and when required is geared towards symptomatic management. Our patient’s biopsy findings and complete resolution of symptoms without intervention supported a diagnosis of KFD in the setting of EBV infection.

© Copyright 2019
Moyer et al. This is an open access article distributed under the terms of the Creative Commons Attribution License CC-BY 3.0., which permits unrestricted use, distribution, and reproduction in any medium, provided the original author and source are credited.

Figure 1: Computed tomography (CT) of the neck and chest.

Widespread hypermetabolic bulky lymphadenopathy. Standardized uptake values (SUVs) ranged from 9.9 to 15.0. Mild diffuse bone marrow uptake was present, but no hypermetabolic osseous lesions were identified. Spleen appeared to be involved with SUV up to 7.0.