We performed a prospective study from April 2016 to September 2016 to define the frequency of bifurcation of the CFA in relation to the femoral head and the relationship between bilateral CFA bifurcations, with bilateral femoral angiography on 579 patients undergoing routine coronary angiography.

The majority (two-thirds) of the individuals in the study population were with normal/low femoral bifurcation with no significant difference in bifurcation level on either side.

Common femoral artery (CFA) is the frequently used access site because of being of relatively large caliber, superficial, and fixed. It courses over the femoral head [2] and in the majority of patients, the bifurcation is below the level of the mid-femoral head [3]. This relationship of the artery to bone allows us easy manual arterial compression and plays a role in reducing the risk of prolonged bleeding after the removal of the catheter or sheath [4].

In both antegrade and retrograde punctures, the optimal technique is a single anterior wall puncture well above the bifurcation and below the origin of the inferior epigastric artery [5].

We are a high-volume tertiary care center performing about 17,000 to 18,000 cases a year. Nearly half of our cases are diagnostic coronary angiograms. We selected a sample size (using the Raosoft system, Raosoft, Inc., Seattle, WA, US) of 579 patients (from 4500 patients, keeping the margin of error as 5% and with a confidence level of 99%) of either sex, aged 20-80 years for femoral angiograms who were undergoing left heart catheterization from April 2016 to September 2016. Patients with chronic kidney disease (CKD), cardiogenic shock, LM ± 3VCAD, and severe left ventricular (LV) dysfunction were excluded from the study to avoid an excessive contrast agent in such high-risk patients. After routine coronary angiography with informed consent and in the absence of exclusion criteria, all the patients underwent a bilateral femoral angiography. For the left femoral artery angiogram, we used the JR4 (Medtronic) diagnostic catheter and took an angiogram with a hand-held injection in the left anterior oblique (LAO) degree 20 projection. For the right femoral artery, we gave a hand-held injection through the 6 French access sheath and recorded the angiogram in right anterior oblique (RAO) degree 20 projections. The femoral angiograms of these patients were examined for the level of femoral artery bifurcation with respect to the femoral head and compared bilaterally. Our study was approved by the ethical review committee of the institution (ERC # 04/2016). 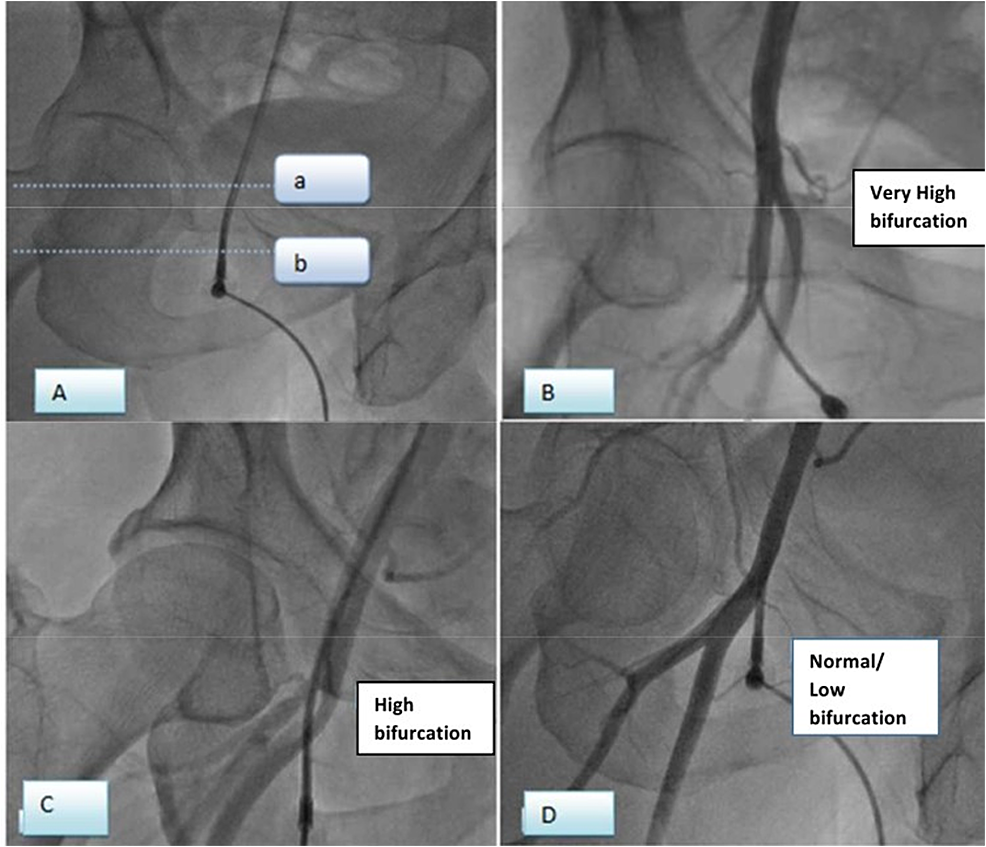 As mentioned above, femoral angiograms were recorded in the 20° ipsilateral anterior oblique view with no cranial or caudal angulation and were reviewed for the determination of the level of femoral artery bifurcation with respect to the femoral head. The bilateral femoral artery angiogram comparison was recorded. Various demographic variables like age, gender, race, height, weight, body surface area (BSA), and body mass index (BMI), which could plausibly be associated with variations in the site of bifurcation were collected for review.

Data were analyzed for pre-specified endpoints. A multivariate logistic regression analysis was performed to evaluate the association between demographic and angiographic variables with the level of femoral artery bifurcation. All statistical analyses were performed using IBM SPSS Statistics for Windows, Version 21.0 (IBM Corp., Armonk, NY, US).

We performed a total of 579 femoral angiograms. The baseline characteristics of these patients are listed in Table 1.

No statistically significant difference was noted in the proportion of patients with normal/low, high, or very high bifurcations on the left as compared to the right (p=0.51). Another important observation was the presence of a bifurcation concordance between the two sides so that a normal/low, high, and very high bifurcation on either side increases the likelihood of a high and very high bifurcation on the contralateral side (Chi-square test p-value <0.01). If either of the common femoral arteries bifurcates high, the odds ratio (OR) of the contralateral common femoral artery to bifurcate high is 151.86 (95% confidence interval (CI) 51.39-448.77). Furthermore, a multivariable logistic regression analysis showed that age, gender, height, weight, body mass index, and body surface area were not predictive of any specific bifurcations on either side.

Table 3: Comparison of our study at NICVD with other studies

For the definition of common femoral artery bifurcation level, we chose a definition that was previously used in the literature and has an easy, practical applicability. We did not find any clinical/physical/anatomical predictors of CFA bifurcation before an initial access is attempted. There was no significant difference in the prevalence of a normal/low, high, or very high bifurcation on the left and right sides (p-value = 0.51).

As the femoral artery is the preferred arterial access route for major interventional procedures, defining its bifurcation level can invariably decrease the vascular complications in procedures like transcatheter aortic valve implantation (TAVI). In TAVI, most of the morbidity and mortalities are due to vascular complications. Every year, thousands of new candidates of TAVI are being added [11]. As the prevalence of patients requiring these percutaneous procedures increases, the need for bilateral femoral arterial access will also increase. Chronic total occlusion percutaneous coronary intervention (CTO PCI) procedures frequently require bilateral femoral artery access. The prevalence of CTOs is as high as 89% and 15% in patients with and without a prior history of coronary artery bypass graft surgery; the potential growth of CTO PCI is large [12]. CTOs account for 5%-10% of the total PCIs performed [13]. Our study will help the operator in planning contralateral femoral artery access if faced with a high femoral artery bifurcation on any one side. In one of the studies, it was found that routine ultrasound guidance improves the cannulation of CFA only in patients with high CFA bifurcations [14]. In such situations, ultrasound guidance can help in visualizing the femoral arterial bifurcation and that can then be correlated to the femoral head anatomically during angiography. Interventional procedures like percutaneous left ventricular support device placement and TAVI require the placement of a large-sized cannula in the femoral arteries. As mentioned in these procedures, the overall success is also determined by the safety of femoral arterial access. If the CFA puncture site is below the bifurcation of the artery, the size of the artery will not only limit the placement of large sheaths but with increased chances of aneurysms and pseudoaneurysms. Most of the vascular closure devices approved by FDA are for use in CFA. These devices have limited use in the branches of CFA if the access site is in a branch vessel [1].

Human subjects: Consent was obtained by all participants in this study. Ethical Review Committee, National Institute of Cardiovascular Diseases (NICVD), Karachi issued approval ERC # 04/2016. This study was approved by the Ethical Review Committee (ERC) of the National Institute of Cardiovascular Diseases (NICVD), Karachi. ERC # 04/2016. Animal subjects: All authors have confirmed that this study did not involve animal subjects or tissue. Conflicts of interest: In compliance with the ICMJE uniform disclosure form, all authors declare the following: Payment/services info: All authors have declared that no financial support was received from any organization for the submitted work. Financial relationships: All authors have declared that they have no financial relationships at present or within the previous three years with any organizations that might have an interest in the submitted work. Other relationships: All authors have declared that there are no other relationships or activities that could appear to have influenced the submitted work.

© Copyright 2018
Mengal et al. This is an open access article distributed under the terms of the Creative Commons Attribution License CC-BY 3.0., which permits unrestricted use, distribution, and reproduction in any medium, provided the original author and source are credited.

Table 3: Comparison of our study at NICVD with other studies