As many as 130,000 inferior vena cava (IVC) filters are placed annually, with as few as 5,000 retrieved a year for patients who no longer require protection from deep vein thrombosis. Superior vena cava (SVC) filter placement is an even less common occurrence and is usually reserved for special cases. Furthermore, the simultaneous placement of IVC and SVC filters is most rare, whereas simultaneous IVC and SVC filter removal has not been reported in the literature. We present a case and a novel technique for successful concurrent removal of IVC and SVC filters in a patient.

The long term risks associated with inferior vena cava (IVC) filters are well documented and include, but are not limited to, lower extremity deep vein thrombosis (DVT), filter fracture, filter migration, filter embolization, and IVC perforation [1]. These risks are always conveyed to the patient before the patient receives a filter placement, in addition to disclosing the possibility of permanently leaving the filter in the IVC. Typically, IVC filters are removed once the patient is no longer susceptible to various forms of coagulopathy and is an adequate candidate for elective filter retrieval. In that case, there are methods for retrieval that are colloquially accepted amongst interventionists [2].

When reviewing the literature for risks and complications of superior vena cava (SVC) filter placement, we found that data is limited, though existent [3]. The complications are similar to that of IVC filter placement; however, placement of SVC filters is controversial and dependent upon specific patient presentations [4]. Furthermore, though there have been documented instances of SVC filter placement in some patients, SVC filter removal has hardly ever been reported [5]. After an extensive review to identify possible complications of concurrent SVC/IVC filter removal, we found that the literature does not recognize such cases or concomitant risks. The following case will elucidate a novel and appropriate method for removing both SVC and IVC filters concurrently in a patient who desired to do so and was an appropriate elective candidate.

This is a case of a 72-year-old African-American male who was diagnosed with a 9 cm right frontotemporal meningioma and who underwent tumor embolization followed by craniotomy and resection. After successful excision of the parenchymal mass, the patient underwent placement of a retrievable IVC filter by vascular surgery for lower extremity venous thromboembolism prophylaxis. However, the patient developed bilateral upper extremity swelling and was diagnosed with bilateral upper extremity deep venous thrombosis (DVTs). Due to the patient’s recent neurosurgical intervention, the risk of hemorrhage from oral anticoagulation was too great. As a result, interventional radiology was consulted for the placement of an SVC filter. After discussion with the patient, the decision was made to place an additional retrievable filter in the SVC, with the intention of having both IVC and SVC filters removed in the future.

Using ultrasound guidance, a micropuncture kit was used to gain access to the right internal jugular vein (IJV) and, subsequently, the right femoral vein. A 180 cm Amplatz Guidewire (Boston Scientific, Marlborough, MA) was carefully placed in the IVC, as to avoid ensnaring either SVC or IVC filters. Subsequently, the same guidewire was introduced through the femoral vein into the SVC in a similar manner.

Over the Amplatz Guidewire, a 15 French 33 cm DrySeal Flex Sheath (W. L. Gore & Associates, Inc., Newark, DE) was placed into the IVC below the level of the IVC filter from the femoral access. A venogram was performed demonstrating the retrievable Denali Vena Cava Filter (Bard Peripheral Vascular, Inc., Tempe, Arizona) with no evidence of intraluminal clot and only mild tilting (Figure 1). 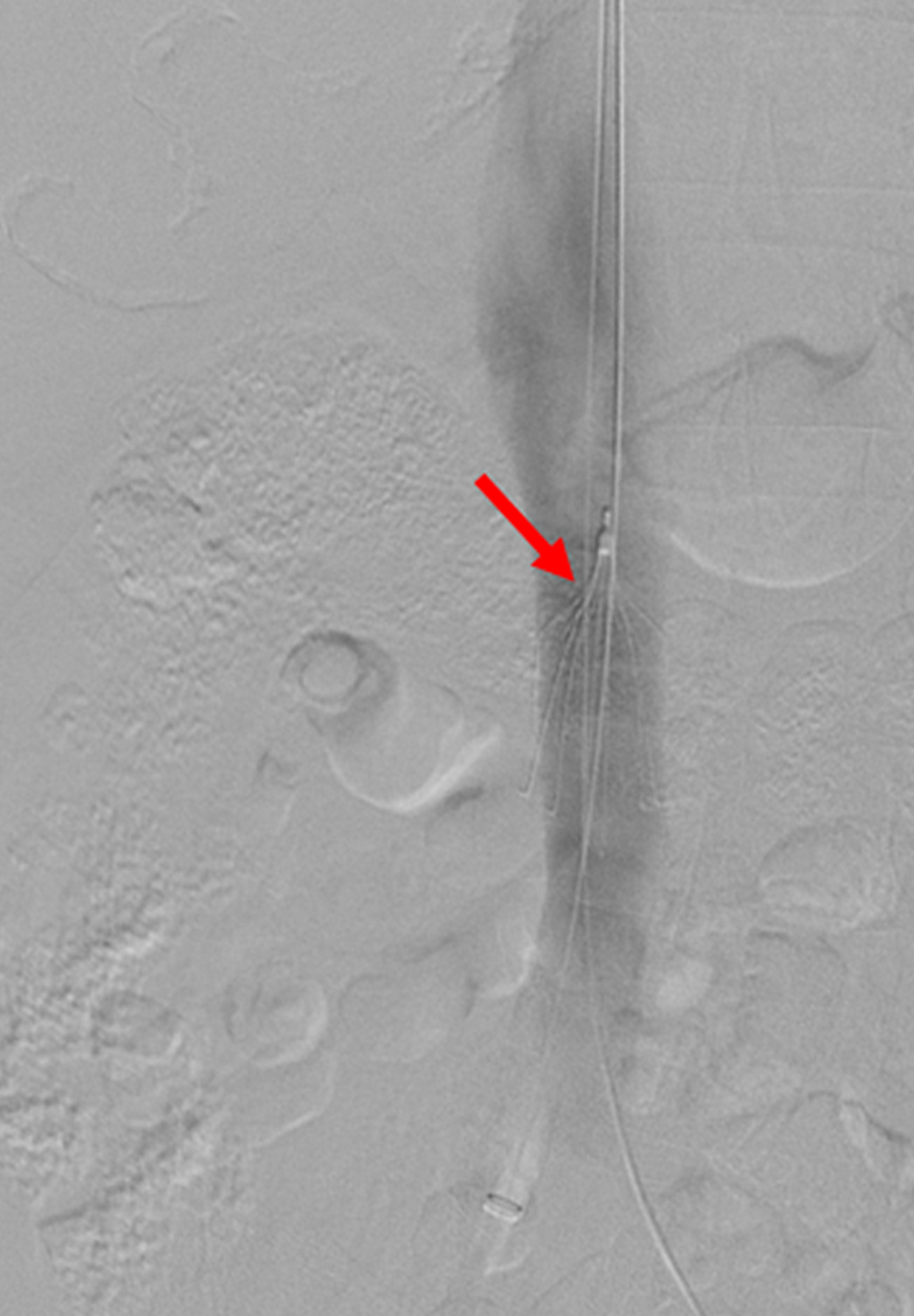 Over the right IJV guidewire, a Contra Flush Catheter (Boston Scientific, Marlborough, MA) was introduced into the SVC. A venogram was performed and showed a retrievable Denali Vena Cava Filter (Bard Peripheral Vascular, Inc., Tempe, Arizona), demonstrating moderate medial tilting towards the brachiocephalic vein. There appeared to be no evidence of SVC abnormality or intraluminal clot (Figure 2). 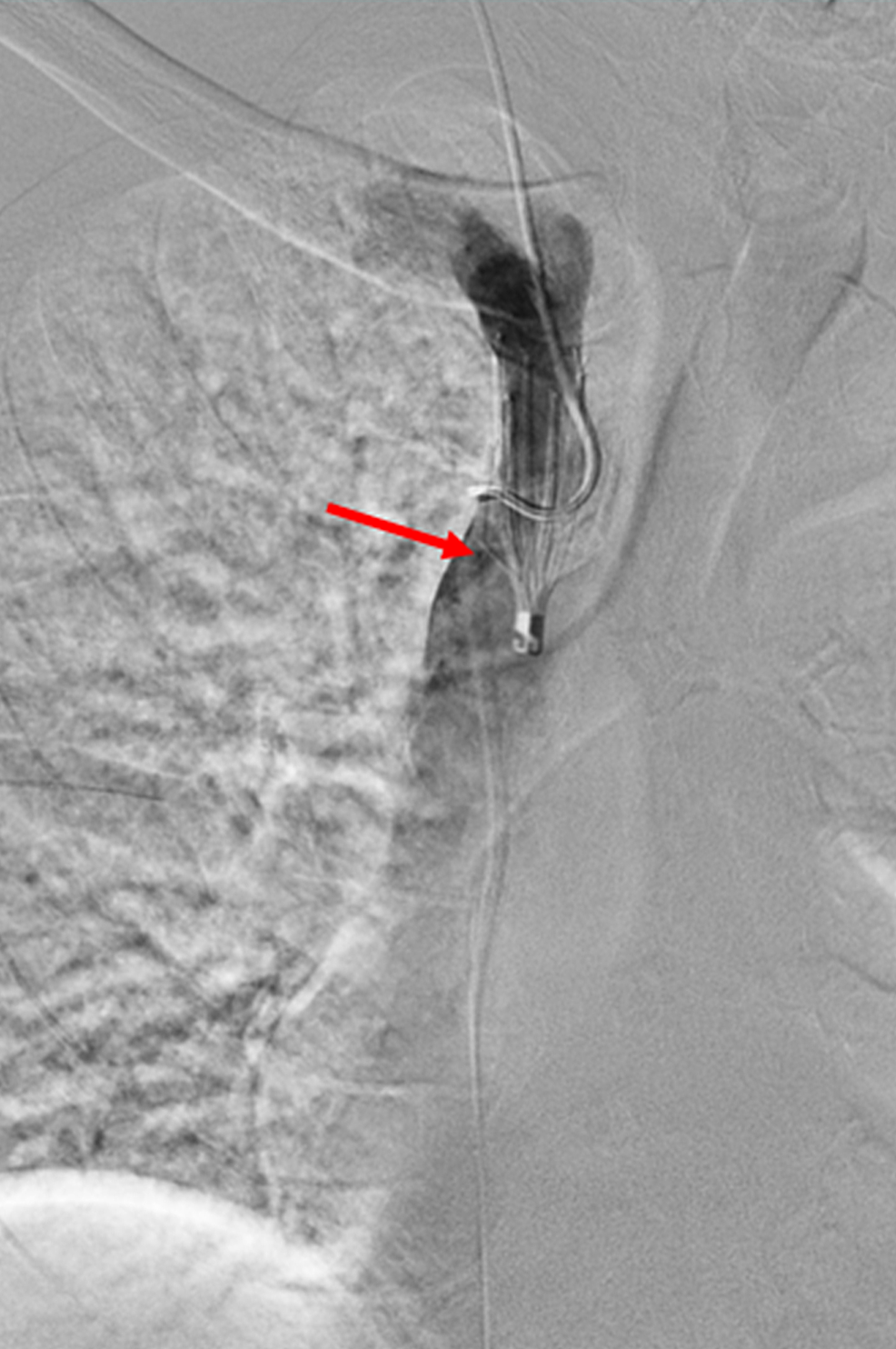 A subtracted venogram of the superior vena cava filter (red arrow) that shows tilting towards the brachiocephalic vein with an unembedded tip.

Step 2. Advancement through the IVC filter with the protective stabilizing sheath

A 15 French DrySeal Flex Sheath was carefully guided through the IVC filter struts with the introducer in place. The introducer was removed once the sheath was in the proximal IVC (Figure 3).

Step 3: Removal of the SVC filter

Due to the medial angulation of the SVC filter tip, a super stiff Amplatz was used as a buddy wire and placed in the left brachiocephalic vein to guide the 8 French sheath medially. This provided support for the snare as it approached the filter tip (Figure 4). 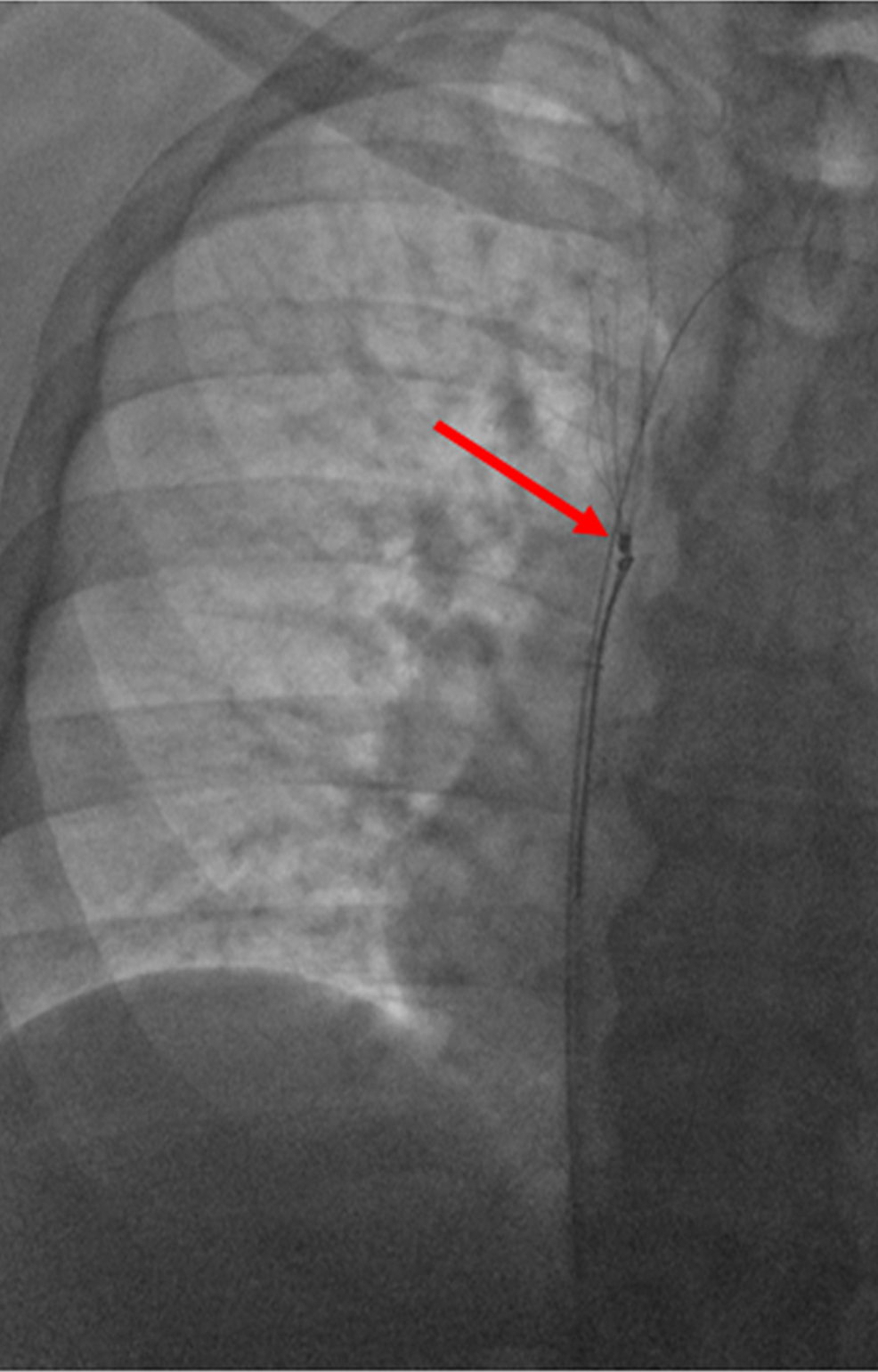 Engagement of the snare device is seen at the apex of the superior vena cava filter (red arrow), with a safety wire seen in the left subclavian vein.

The filter was lassoed with a 10 mm Amplatz Gooseneck Snare (Medtronic, Minneapolis, MN) and removed without incident. A post-filter removal venography demonstrated an intact SVC without evidence of injury or extravasation (Figure 5). 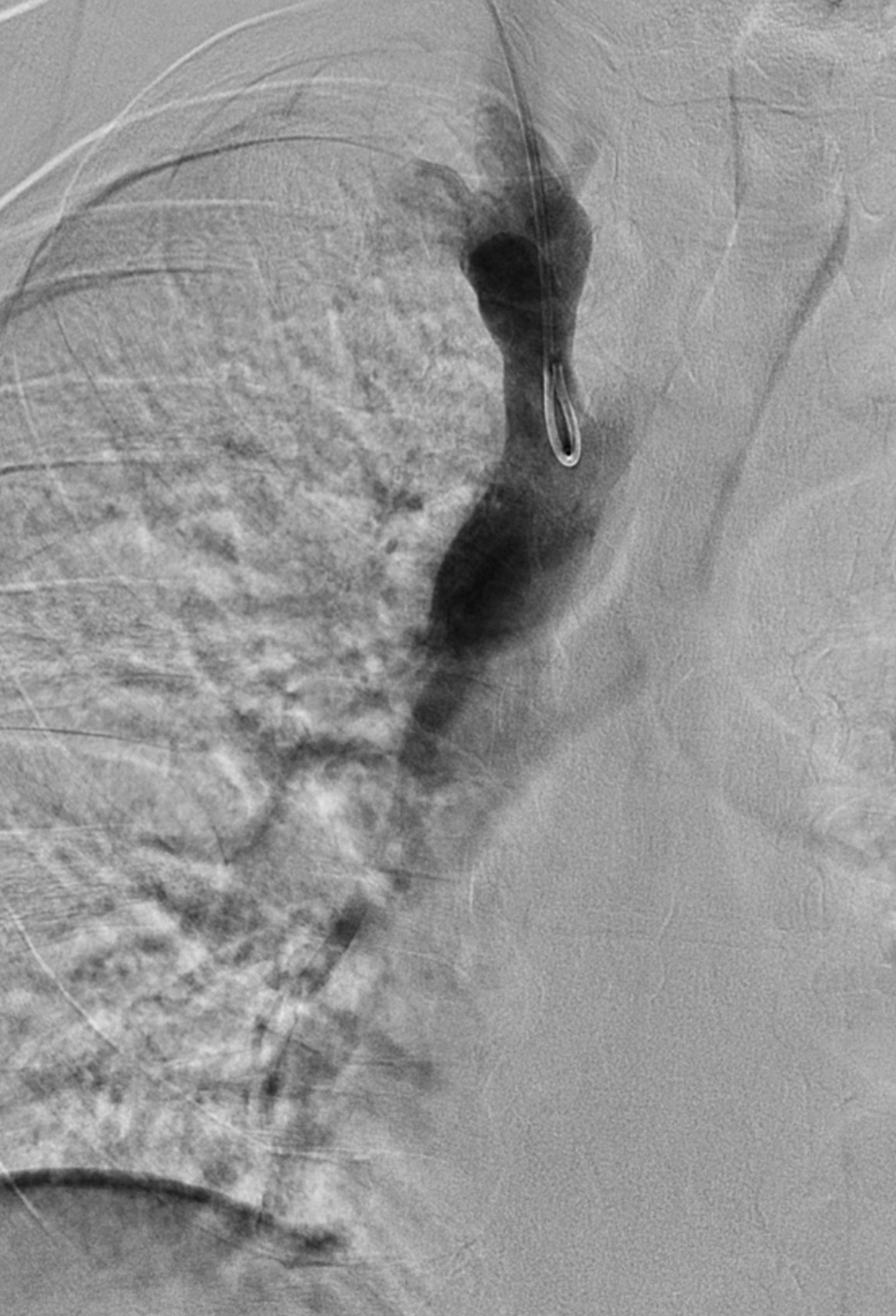 A post-interventional venogram of the superior vena cava without evidence of injury or extravasation.

The 8 French sheath was removed with the SVC filter entrapped within it.

Step 4: Retraction of the protective sheath and removal of the IVC filter

The introducer was placed back into the DrySeal Flex Sheath and carefully retracted back below the IVC filter. An 8 French Pinnacle Destination Guiding Sheath was placed over the right IJV guidewire to the tip of the IVC filter. The filter was lassoed with the 10 mm loop diameter Amplatz Gooseneck Snare and removed without incident (Figure 6). 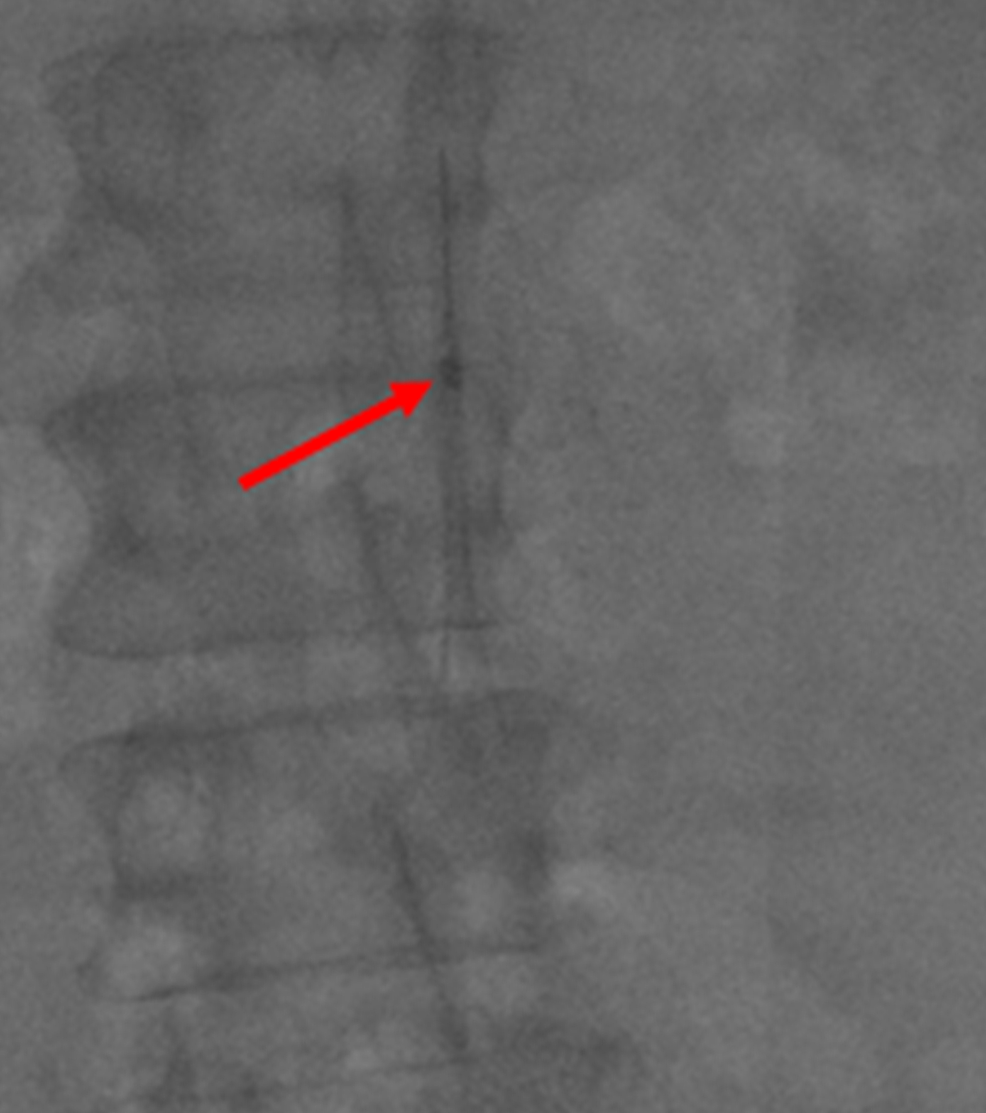 Figure 6: Retrieval of the Inferior Vena Cava Filter with a Snare Device

The inferior vena cava filter was engaged and lassoed at the apex with a snare device (red arrow).

A post-filter removal venography performed through the DrySeal Flex Sheath demonstrated an intact IVC without evidence of injury or extravasation (Figure 7). 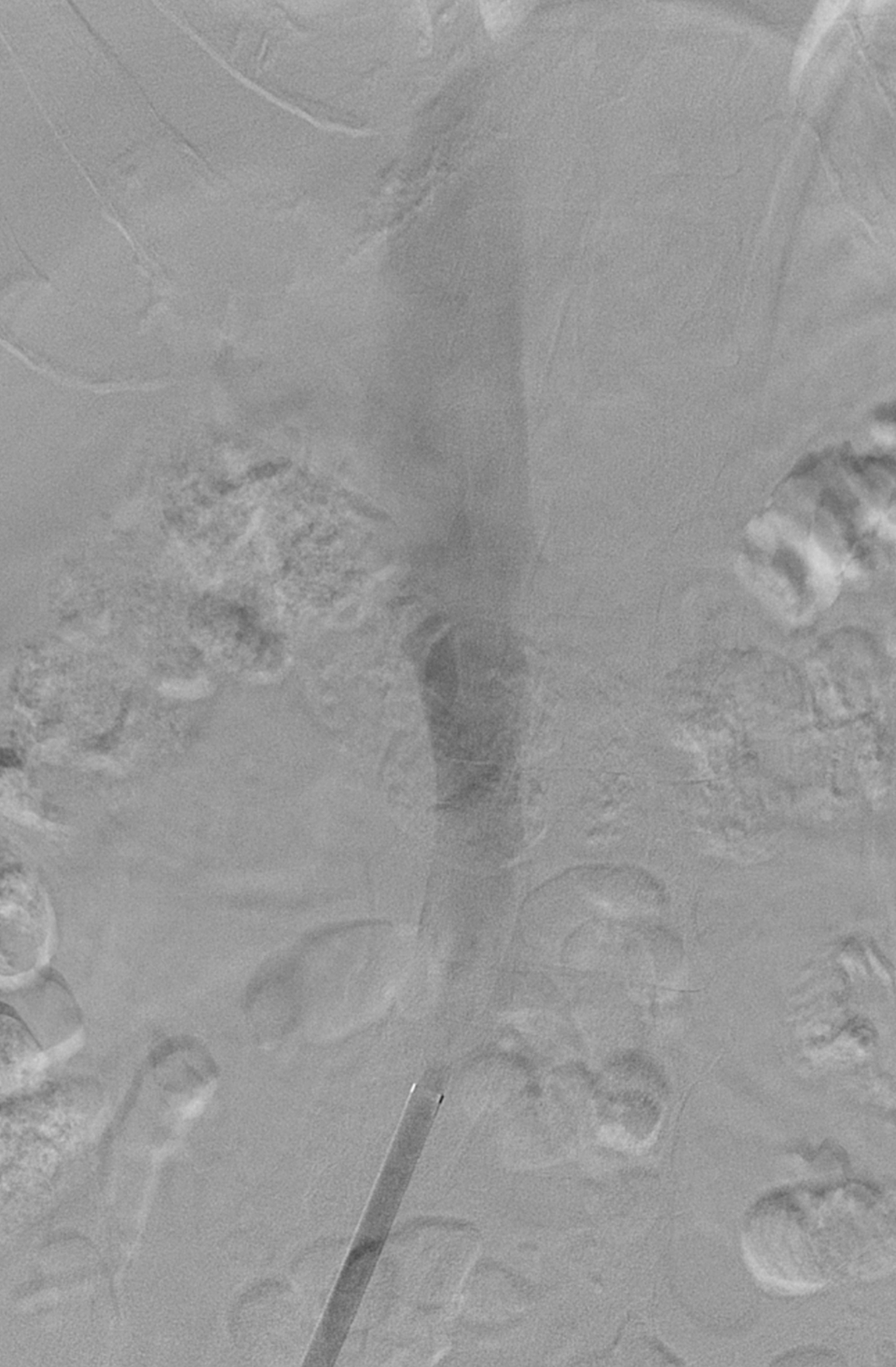 All guidewires and catheters were then removed, and manual pressure was applied until hemostasis was obtained at both access sites.

The DrySeal Flex Sheath was chosen for its characteristic polytetrafluoroethylene (PTFE) coated outer surface, without texture or ribbing. Carefully placing this characteristically diminished friction coated sheath through the IVC filter would allow the inner sheath to move past the IVC filter without disturbance [6]. Additionally, having a larger 15 French diameter sheath would provide support and increase maneuverability of the inner sheath and wires. Any manipulation that needed to occur to advance wires or catheters when accessing the SVC was conducted entirely within the 15 French DrySeal Flex sheath, preventing any form of contact with the IVC filter at any point.

This method for concurrent SVC and IVC filter removal decreased the possibility of filter migration or fragmentation. A large 15 French DrySeal Flex Sheath with a characteristic PTFE coated outer surface was a necessity in the success of this case. The protective outer sheath allowed for increased operator motility, ensuring minimal disturbance of the IVC filter while initially removing the superior filter in the SVC.

Concurrent removal of SVC and IVC filters is a novel interventional method that has never been documented in medical literature before. The described sequential order of dual SVC/IVC filter removal is a well-thought-out progression of events that offers the best probability for successful retrieval of both filters in one session. Since the IVC filter apex is oriented toward the SVC filter and the SVC filter apex oriented toward the IVC filter, conventional removal of the filters is essentially impractical. Upon rare request and patient adequacy, using the intervention described offers the safest and most intuitive retrieval method of both filters.

© Copyright 2018
Harmon et al. This is an open access article distributed under the terms of the Creative Commons Attribution License CC-BY 3.0., which permits unrestricted use, distribution, and reproduction in any medium, provided the original author and source are credited.

A subtracted venogram of the superior vena cava filter (red arrow) that shows tilting towards the brachiocephalic vein with an unembedded tip.

Engagement of the snare device is seen at the apex of the superior vena cava filter (red arrow), with a safety wire seen in the left subclavian vein.

A post-interventional venogram of the superior vena cava without evidence of injury or extravasation.

Figure 6: Retrieval of the Inferior Vena Cava Filter with a Snare Device

The inferior vena cava filter was engaged and lassoed at the apex with a snare device (red arrow).