Pancreatic cysts are commonly found in adults, but extremely rare in infants and children. Cysts can be true cysts or pseudocysts. A true cyst has an epithelial lining which secretes fluid, whereas pseudocysts have a fibro-inflammatory lining [1]. The fibro-inflammatory lining is made up of fibrous and granulation tissue but lacks an epithelium. In children, as compared to true pancreatic cysts, pseudocysts are more commonly seen [2].

A 13-year-old child presented to a tertiary care hospital with abdominal pain, nausea, and vomiting. The severity of the pain was recorded as 5/10 when mild and 8/10 when severe. He experienced nausea and vomiting after every meal.

On physical examination, the patient had normal vitals. An abdominal exam showed tenderness in the epigastric region but no visceromegaly, and bowel sounds were normal.

Previously, at the age of one year, he presented to a primary care hospital with episodic epigastric pain. An abdominal ultrasound was performed which showed two cystic structures in the left lumbar region. This was followed by a computed tomography (CT) scan at the time, which showed two cysts in the body and tail of the pancreas. The body and tail of the pancreas were not visualized separately. Stranding of adjacent peri-pancreatic soft tissue and minimal thickening of the adjacent duodenum were also seen. A diagnosis of congenital pancreatic cyst was established.

A CT scan was repeated in the tertiary care hospital. It showed a bi-lobed soft tissue density lesion measuring 7.2 × 5.8 × 2.8 cm (cranio-caudal×transverse×antero-posterior (CC×TR×AP)), located between the stomach and the pancreas. It was seen to be inseparable from the pancreas and projecting into the mesentery. Mild hepatomegaly was also reported (Figure 1). This CT scan report confirmed the diagnosis of a pancreatic cyst.

Given the patient's worsening symptoms of severe pain, nausea, and vomiting, and the CT findings, it was decided to proceed with an exploratory laparotomy. The cyst was excised successfully and a sample was sent for histopathology. Post-surgery, the patient remained stable and was discharged after a few days. 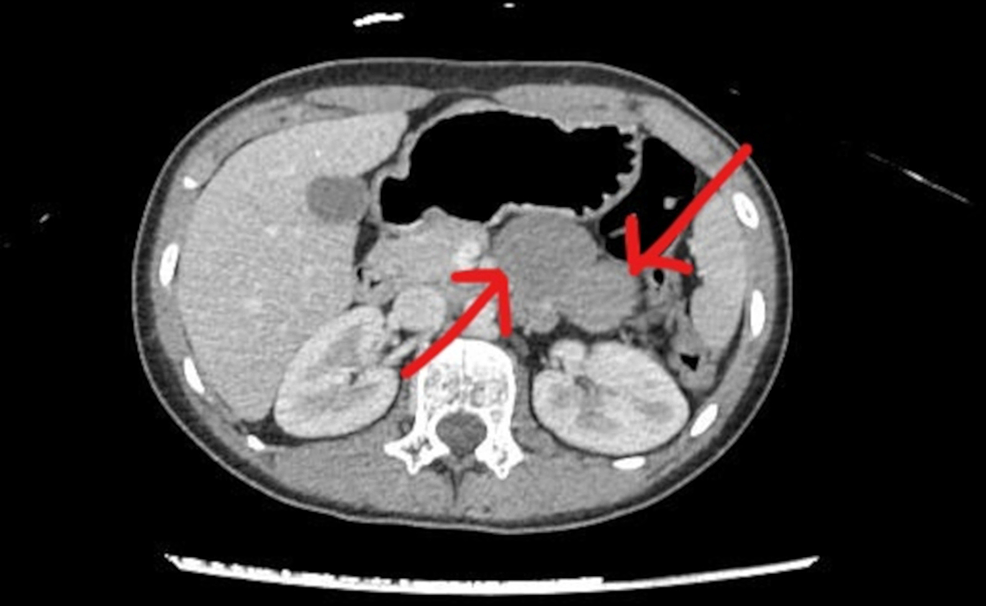 The histopathology report confirmed a true congenital pancreatic cyst. Grossly, the specimen consisted of a cystic structure measuring 8.0 × 3.5 × 3.5 cm. Opening the outer surface revealed a bi-lobed cyst separated by fibrous septae. It contained a thick brown material. Microscopically, the cyst walls were seen to be lined by respiratory epithelium with areas of squamous metaplasia (Figures 2-3). Certain sections also had areas of gastric epithelial lining with the underlying stroma showing irregularly arranged smooth muscle layer (Figure 4). There was no evidence of malignancy in the sample examined. 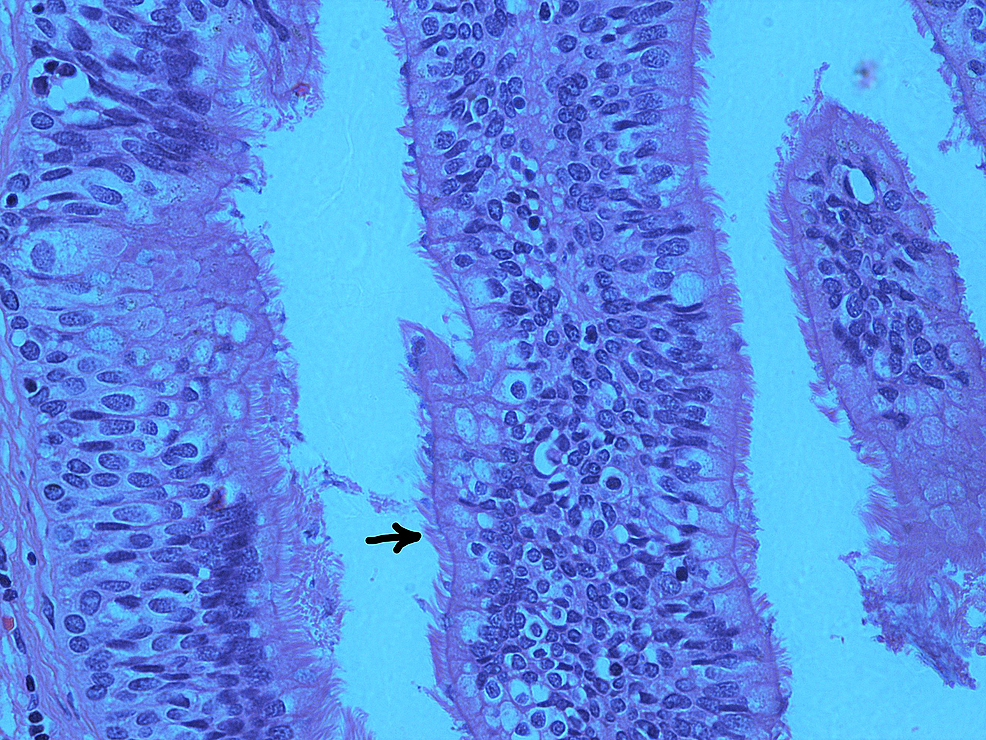 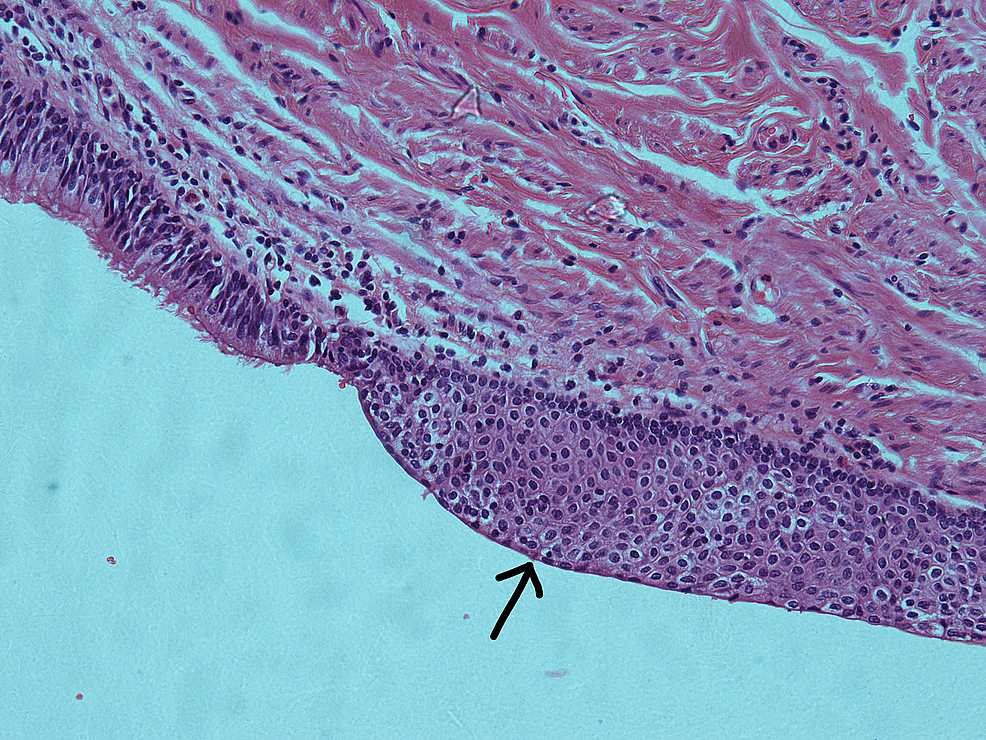 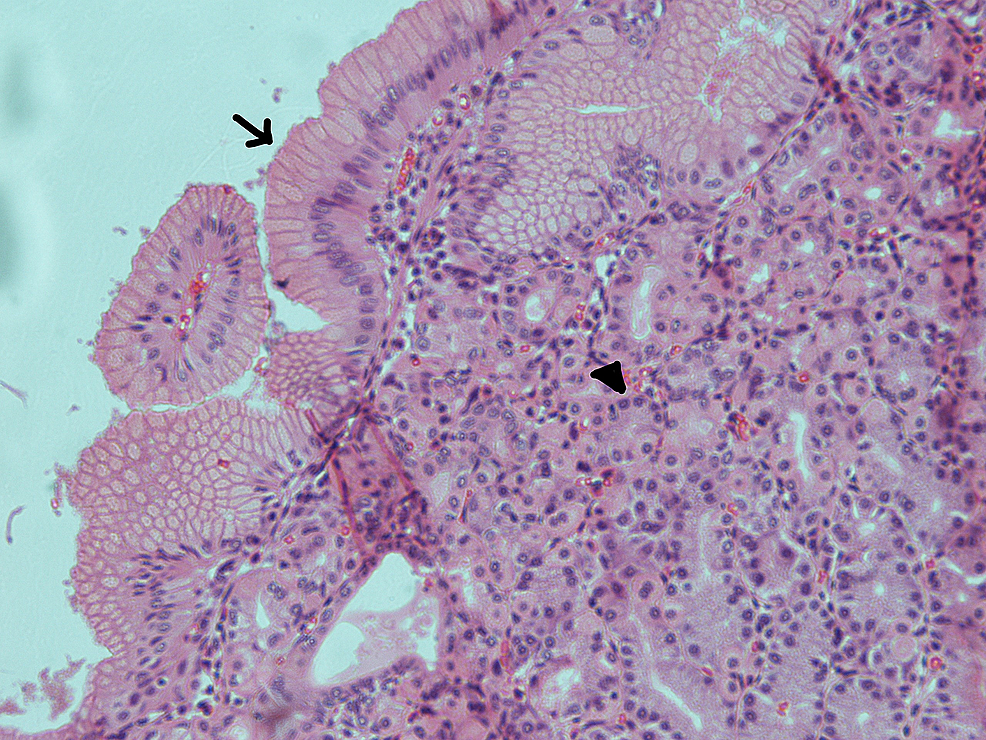 Pancreatic cysts are extremely rare in the pediatric population [3]. Until the 1970s, cystic lesions of the pancreas were classified as either mucinous or serous neoplasms. However, in the 1980s, due to the introduction of new imaging techniques, multiple new entities of pancreatic cysts were revealed [4]. Currently, pancreatic cysts are majorly subdivided into the following categories: congenital, retention, duplication, pseudocysts, neoplastic, and parasitic cysts. True congenital cysts are the rarest among these [3].

Cystic lesions of the pancreas are small and asymptomatic, often detected incidentally [2]. They may present with abdominal pain, abdominal distention, vomiting, jaundice or pancreatitis secondary to the pressure on adjacent structures. Pancreatic cysts can be isolated, or associated with asphyxiating thoracic dysplasia (Jeune syndrome), von Hippel-Lindau disease, Beckwith-Wiedemann syndrome, Ivemark syndrome, hemihypertrophy, renal tubular ectasia, anorectal malformations, and polycystic kidneys [5]. Although our patient suffered the symptoms of abdominal pain, abdominal distention, and vomiting, he did not endure any of these disease conditions, which could have resulted in earlier excision of the cyst.

True congenital pancreatic cysts are difficult to diagnose pre-operatively. Ultrasonography is the most rapid and consistent way to differentiate between solid and cystic structures. However, CT scan or magnetic resonance imaging (MRI) is essential for proper localization of the cyst. A CT scan gives a more accurate picture as to the origin of the cyst whereas MRI is better at establishing the extension of the cyst into surrounding structures [6]. Nevertheless, it is very difficult to differentiate between different types of congenital pancreatic cysts on the basis of imaging. Endoscopic retrograde cholangiopancreatography (ERCP) can portray any communication of the cyst with pancreatic duct or biliary tree, but being an invasive procedure, it is not considered the best diagnostic modality for pancreatic cysts [2]. Endoscopic ultrasound (EUS) is being used in adults to further evaluate pancreatic cysts. It provides better images due to the closeness of the transducer to the area of interest, helping to better visualize the cyst. EUS also helps with taking samples of cystic fluid for enzymes and tumor markers. This helps differentiate between various types of cysts and in ruling out malignancies [7].

The preferred treatment for congenital pancreatic cysts is complete surgical excision, as was performed in our patient. The cysts located in the body and tail of the pancreas are excised completely along with distal pancreatectomy while those located in the head are difficult to approach and drained internally through cystoduodenostomy or Roux-en-Y cystojejunostomy [3].

© Copyright 2018
Shahid et al. This is an open access article distributed under the terms of the Creative Commons Attribution License CC-BY 3.0., which permits unrestricted use, distribution, and reproduction in any medium, provided the original author and source are credited.