Hemangioblastomas are rare, slow-growing, highly vascularized tumors of the central nervous system which often occur in the spinal cord. When presenting as sporadic, isolated tumors without Von-Hippel Lindau disease, they are curable through surgery with a low rate of recurrence. Tumor recurrence in these cases is usually associated with prior subtotal resection. However, to the best of our knowledge, cases of recurrent, sporadic spinal hemangioblastoma have not been reported to spontaneously arrest without intervention or symptoms. We report a patient who underwent an initial complete resection of a cervical spinal hemangioblastoma, a subtotal resection of tumor recurrence four and a half years later, and nine years of neurologic and radiographic stability with no additional interventions.

Hemangioblastomas are rare, slow-growing, highly vascularized tumors of the central nervous system most commonly found in the posterior cranial fossa and spinal cord [1]. The only known genetic etiology is the loss of functional Von Hippel-Lindau (VHL) tumor suppressor, in VHL disease, which is seen in 25% of hemangioblastomas. Sporadic, isolated spinal hemangioblastomas, without VHL mutation, typically present later in life as solitary lesions, cause more severe neurological deficits, and are often curable through surgery [2].

A 72-year-old woman presented with nine months of neck pain and left upper extremity pain and numbness, three months of right upper extremity pain, and more recent weakness in the left arm. She also had a long history of urinary stress incontinence with no changes in bowel or bladder function during the nine months of symptoms preceding her presentation. Physical examination was notable for 4/5 triceps strength, effort-limited 4+/5 left grip strength and symmetric reflexes. Magnetic resonance imaging (MRI) revealed a cervical intramedullary syrinx from C5-C7 with a nodule suggestive of a hemangioblastoma (Figure 1).

She underwent uncomplicated elective C5-C7 laminectomies and resection of the nodule. Pathological testing confirmed the lesion to be a hemangioblastoma.

Figure 2: Recurrence of the hemangioblastoma and syrinx

Four and a half years after her index surgery, increasing enhancement size prompted additional surgery, including extension laminotomies/laminectomy from C3-T1 and resection of the pathology-proven hemangioblastoma. Imaging two months after the second surgery showed a punctate focus of enhancement at the dorsal aspect of C6, suspicious for residual or recurrent tumor. Subsequent annual imaging, with the most recent scan nine years after the second operation, has shown no significant changes in the focus of enhancement at C6 (Figure 3). No further interventional treatment has been performed. 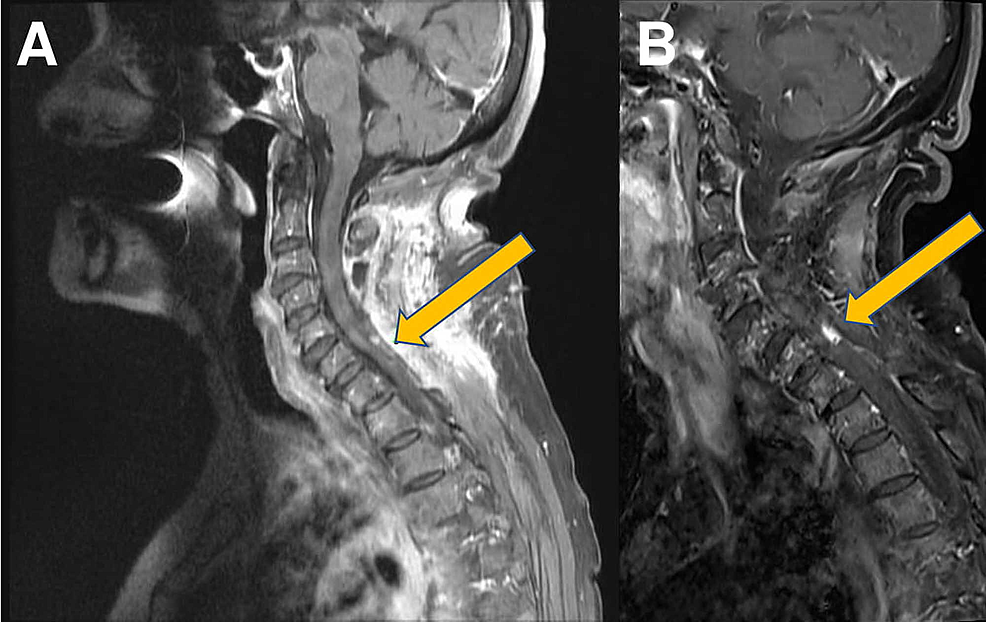 One known causative factor of spinal hemangioblastomas is Von-Hippel Lindau disease caused by mutation or loss of the VHL gene. VHL encodes an E3 ubiquitin ligase that targets hypoxia-inducible factor 1α (HIF1α), which is involved in the regulation of cell metabolism and vascular proliferation [1]. Mutation of VHL is present in approximately 25% of hemangioblastoma patients [1], and 88% of hemangioblastoma patients with VHL present with spinal disease [6]. The role of VHL, as well as vascular proliferation in disease progression, makes anti-HIF1α drugs and vascular endothelial growth factor (VEGF) inhibitors, such as the angiogenesis inhibitor bevacizumab, potential treatments for spinal hemangioblastomas in the setting of VHL disease. Anti-VEGF therapies, anti-HIF1α therapies, IFN-alfa-2a, and thalidomide have shown varying levels of therapeutic value in the treatment of VHL-associated hemangioblastomas [1, 10].

Sporadic hemangioblastomas have no known causative factors. Only 20% of these lesions occur in the spinal cord, and they have a different presentation when compared to VHL-associated lesions [6]. Sporadic disease typically presents later in life (4th vs 3rd decade), leads to more severe neurological deficits, and usually presents as a single larger lesion (in contrast to smaller multiple VHL-associated lesions). Typically, they are distributed in the cervical and thoracic spine (compared to all spine levels with VHL disease), and significantly improve after surgery (while VHL lesions do not and often recur) (Table 1) [6].

For both sporadic and VHL-associated hemangioblastomas, recurrence is associated with subtotal resection of lesions; however, the recurrence is rare in sporadic disease while one-third of patients with VHL-associated disease will recur every two years [6]. Overall, the rate of recurrence in sporadic disease has been reported between 6.25% and 20% [2]. Other than a VHL mutation, the clinical and molecular causes of hemangioblastoma proliferation are unknown. In our case, without VHL disease being present, it is unclear why the second recurrence spontaneously arrested after subtotal resection and no additional intervention. Interestingly, our patient was diagnosed with complex regional pain syndrome (CRPS) a year before her second operation. Various changes in genetics, inflammation signals, and circulating catecholamines have been known to affect CRPS, and it is unknown whether these factors played a role in affecting the growth of her sporadic hemangioblastoma [11]. Since sporadic spinal hemangioblastomas have been reported to recur up to 15 years postoperatively [2], it is still possible that symptomatic changes may occur. Therefore, future continued monitoring is needed. If the lesion continues to remain stable, it will indicate that subtotal resection of sporadic hemangioblastoma during surgery for recurrence does not always lead to significant growth or symptomatic disease.

© Copyright 2018
Li et al. This is an open access article distributed under the terms of the Creative Commons Attribution License CC-BY 3.0., which permits unrestricted use, distribution, and reproduction in any medium, provided the original author and source are credited.

Figure 2: Recurrence of the hemangioblastoma and syrinx