Post-traumatic stress disorder (PTSD) is prevalent in children, adolescents and adults. It can occur alone or in comorbidity with other disorders. A broad range of psychotherapies such as cognitive behavioral therapy (CBT) and eye movement desensitization and reprocessing (EMDR) have been developed for the treatment of PTSD.

Through quantitative meta-analysis, we aimed to compare the efficacy of CBT and EMDR: (i) relieving the post-traumatic symptoms, and (ii) alleviating anxiety and depression, in patients with PTSD.

The results of this meta-analysis suggested that EMDR is better than CBT in reducing post-traumatic symptoms and anxiety. However, there was no difference reported in reducing depression. Large population randomized trials with longer follow-up are recommended to build conclusive evidence.

The definition of post-traumatic stress disorder (PTSD) has evolved over time and available criteria differ in many ways. According to the diagnostic and statistical manual of mental disorders (DSM-V), a traumatic event is defined as the exposure to actual or threatened death, serious injury or sexual violation and leading to re-experiencing, avoidance, negative cognitions and mood, and arousal [1]. But the ICD-10 Diagnostic Criteria for Research (ICD-10-DCR) only nominates events that lead to the distress of individuals [2]. The main variance between those two criteria is, the number of symptoms and duration of persistence. In addition, the DSM-V criteria require symptom persistence for more than a month whereas ICD-10-DCR necessitates symptom persistence for more than six months. The PTSD can occur due to natural or human events; natural incidents include natural calamity, accidents, assault, terrorist attacks, and war, while the human events include sexual assault, sudden death, kidnapping, serious illness and disaster [3].

Few studies have reported a comparison of occurrence of traumatic events among different countries. A comparison of 16 countries found Netherlands, Colombia and the USA had the highest rates of trauma exposure while the lowest rates of exposure were found in Italy, Romania and Spain [4]. However, not all people who exposed to trauma develop PTSD. Moreover, the risk of developing PTSD varies among different sections of the population. Population sections that are at a higher risk of developing PTSD are females, those lacking social support, economically marginalized, and the younger at time of exposure [5]. A survey of participants aged between 15 and 54 years in the United States found more than 60% of males and more than half of the females had experienced a traumatic event [6].

The effectiveness of CBT in treating PTSD has been documented in many studies [9, 10]. In addition, the CBT has shown to be effective at reducing PTSD scores in PTSD associated with other conditions such as depression and anxiety. Similarly, the EMDR is one of the best remedies of PTSD as per World Health Organization (WHO) and there is a mounting number of studies reporting the effectiveness of EMDR in treating PTSD [11, 12]. EMDR has proved to be an effective treatment for reducing negative emotions and arousal. Additionally, the recent trials have established that EMDR has an effective role in reducing anxiety and depression in PTSD patients [3, 13].

This systematic review and meta-analysis is carried out in accordance with guidelines issued by Preferred Reporting for Systematic Reviews and Meta-analyses (PRISMA).

Our systematic searching was limited to articles published between 1999 and December 2017. The process of identifying relevant articles began by searching for EMBASE, Medline and Cochrane Central Register of Controlled Trials. A manual search of the references list of included articles was conducted to identify any articles not retrieved by the database searches.

Only studies that met the following criteria were included in this meta-analysis: (1) study participants were children, adolescents or adults; (2) studies published in the English language; (3) studies that reported comparative results from randomized controlled trials of CBT and EMDR groups; (4) studies that reported a diagnosis of PTSD in accordance to DSM-V or DSM-IV or DSM-III; (4) studies that reported adequate data for calculation of design effect. The exclusion criteria were: (1) studies reporting treatment methodologies focused on conditions other than PTSD, such as depression, bipolar disorder, behavioral problems, substance abuse, psychosis, suicidal ideation, and substance dependence; (2) studies reporting other types of psychotherapies such as psychodynamic therapy, hypnotherapy, self-help, and biofeedback.

All articles identified from all the databases were imported into one Endnote library where all duplicates were removed. The unique study titles and abstracts were screened through two independent reviewers, to check if they met inclusion criteria. Studies that met the inclusion criteria were fully reviewed by a third contributor “Ramya Bachu”, to check if they reported the required data. Studies that did not report the required data were excluded.

The number of articles found in each database through using of various key terms is shown in Table 1. Of all screened papers, 14 articles were finally eligible for meta-analysis. The flow diagram of studies’ selection is shown in Figure 1. 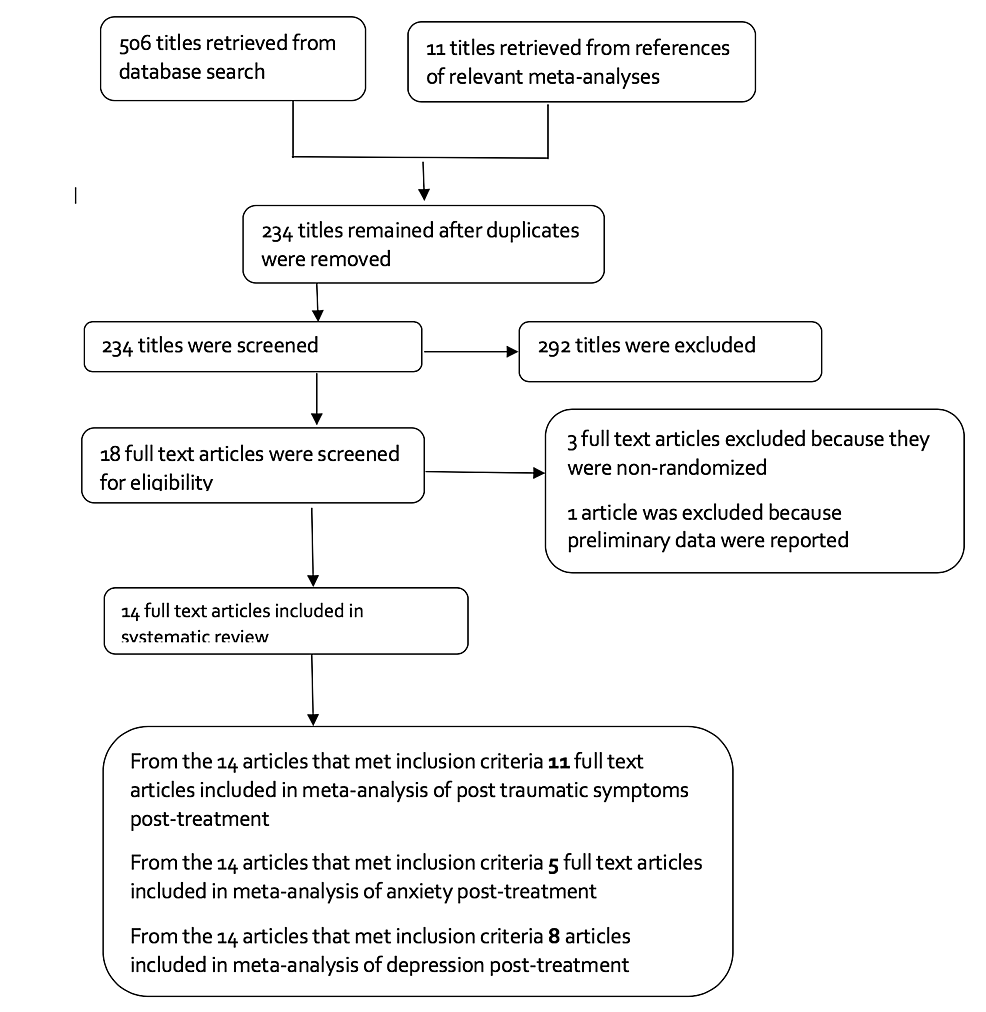 Pooling 11 studies in a meta-analysis, the EMDR was better than CBT in reducing post-traumatic symptoms [SDM (95% CI) = -0.43 (-0.73 – -0.12)]. The results were statistically significant (p = 0.006); however, the studies included in this quantitative meta-analysis had a high level of heterogeneity (I2 = 62%) mentioned in Figure 2. Also, a funnel plot of publication bias did not show any asymmetry and no bias among included studies mentioned in Figure 3.

At three months follow-up, the meta-analysis of four studies showed that EMDR was not better than CBT in reducing post-traumatic symptoms [SDM (95% CI) = -0.21 (-0.50 – 0.08), p = 0.15] mentioned in Figure 4. Also, a funnel plot of publication bias of this meta-analysis did not show any asymmetry and no bias among included studies in Figure 5.

The meta-analysis of five studies including 239 patients revealed that EMDR is better than CBT in reducing anxiety symptoms [SDM (95% CI) = -0.71 (-1.21 – -0.21)]. The result was statistically significant (p = 0.005) but there was marked heterogeneity between included studies (I2 = 70%) in Figure 6. Of note, there was no evidence of publication bias in the included studies in Figure 7.

The meta-analysis of depression symptoms was based on eight studies. The meta-analysis showed that EMDR was not better than CBT in reducing depression [SDM (95% CI) = -0.21 (-0.44 – 0.02), p = 0.08]. Also, the included studies had a high incidence of heterogeneity (I2 = 70%). These results are shown in Figure 8. Of note, there was no evidence of publication bias in the included studies in Figure 9.

The objectives of this meta-analysis were to compare the efficacy of EMDR and CBT in alleviating post-traumatic symptoms, anxiety and depression. The key result of this meta-analysis is, participants treated with EMDR had better alleviation of post-traumatic symptoms as compared to participants treated with CBT (p = 0.006). However, the superiority of EMDR at three months follow-up was not evident. The EMDR also had a statistically significant superiority over CBT (p = 0.005) in alleviating anxiety. Although EMDR was observed to be better than CBT in reducing depression, this difference was not statistically significant.

The results of the meta-analysis by Lee and Ho (2012) and Davidson and Parker (2001) found inconsistent results with the current meta-analysis on the efficacy of EMDR and CBT [29, 30]. Their meta-analysis did not find a significant difference between EMDR and CBT (p = 0.085) in alleviating post-traumatic symptoms while the current meta-analysis found a statistically significant difference. It is noteworthy mentioning that the Davidson and Parker (2001), Seidler and Wagner (2006), and Lee and Ho (2012) only included studies that have been published up to 2006. While our study aimed to investigate studies published before and after 2006, which will remain an important advantage of our meta-analysis compared to previous studies [30,11,29].

Regarding reducing anxiety, the current meta-analysis reported that EMDR was better than CBT in alleviating anxiety, which is consistent with the findings of Moreno-Alcazar et al. (2017) who also found a statistically significant difference.

When translating the findings of this meta-analysis into clinical practice, there are several limitations that need to be considered. For instance, there are few numbers of included participants in the analyzed randomized trials. We also searched only three major databases; however, we considered the manual searching to cover more articles. The subgroup meta-analysis of post-traumatic symptoms and depression at three months follow-up, comprised a few number of analyzed studies. Our inferences must be interpreted cautiously due to the presence of bias in more than one domain of included trials. We also did not conduct meta-regression of various variables such as age and sex due to a small number of included studies. Future large-scale randomized trials are warranted with longer follow-up periods and adherence to well-designed protocols.

The results of this meta-analysis suggested that EMDR is better than CBT in reducing post-traumatic symptoms and anxiety. However, there was no difference reported in reducing depression. Large population randomized trials with longer follow-up are recommended to build conclusive evidence.

Center for Addiction and Mental Health, University of Toronto, Toronto, CAN