In this study, our objective was to determine the number and location of cerebral microbleeds in ischemic stroke and to identify the predictive role of microbleeds for hemorrhagic transformation.

This was a retrospective cohort study. Microbleeds were visually rated on SWI scans of patients who presented with an ischemic stroke and had an SWI scan within 24 hours of onset and a computed tomography (CT)/MRI scan during follow up. Microbleeds were graded as Grades I-IV.

Microbleeds detected on an SWI scan is a relevant and accurate predictor of hemorrhagic transformations in acute ischemic infarcts and should be added to MRI stroke protocols.

A prospective blinded randomized trial has proved that SWI could detect hemorrhagic transformation even a number of minutes earlier than T2*GRE images after blood extravasation, as SWI is more sensitive to deoxyhemoglobin than CT scans [3]. The potential of DWI for monitoring disease in the head and neck has shown promising results in patients with head and neck lesions, as shown in recent studies. [4]

Microbleeds have been found to have an association with hypertension, cognitive decline, coronary microvascular disease, stroke, and mortality in different populations. However, somewhat due to differences in scanning techniques, these associations have not been decisively found across all the studies [5-6]. So, sensitive imaging techniques are required to visualize microbleeds, as they predict cerebrovascular events in patients with ischemic stroke, and microbleeds are up to three times more likely to have an ensuing intracerebral hemorrhage (ICH), including hemorrhagic transformation or recurrent ischemic stroke [1].

According to a meta-analysis, microbleeds were presents in 44% of patients with recurrent ischemic stroke and 83% with recurrent ICH [6]. Another recent meta-analysis reported individual patient data pre-thrombolysis, indicating that cerebral microbleeds are independently associated with an increased risk of ICH and poor functional outcome after acute ischemic stroke [7].

So, the most common and alarming complication in an acute ischemic stroke is hemorrhagic transformation, which can significantly worsen prognosis and is usually seen within the first few days following infarction, causing a major decrease in the patient’s quality of life and clinical outcome. The risk of transformation exacerbates exceptionally when considerable cerebral infarctions are present [8-9].

The purpose of this study was to evaluate cerebral microbleeds as a predictor of hemorrhagic transformations, determine the number and location of cerebral microbleeds in an ischemic stroke, and identify if it can be used as a screening tool for a more in-depth assessment and thus intervention.

This was a retrospective cohort study of stroke patients. After approval from the institutional review board (IRB) of Shifa International Hospital, Islamabad, data were collected from January 1, 2014, to December 31, 2015.

Microbleeds were visually rated on the SWI scans of the patients by two human raters. Both raters were sufficiently trained prior to the visual analysis. In case of any discordance between the raters, a consultant radiologist was consulted. Follow-up CT/MRI scans were reviewed for hemorrhagic transformations. The number and location of the microbleeds were recorded on the proforma. Data were analyzed with SPSS 21 (IBM Corp., Armonk, NY, US) and the Chi-squared test was applied. Age, sex, pertinent comorbidities, and location were recorded on a standard proforma. The microbleeds were graded as absent (total count, 0), mild (1 to 2), moderate (3 to 10), and severe (>10) [10].

Patients who presented at Shifa International Hospital from January 1, 2014, to December 31, 2015, were reviewed for this study. Among them, patients were included if they presented with acute ischemic stroke and had an SWI/MRI scan within 24 hours of onset and a follow-up CT or MRI scan during present admissions. 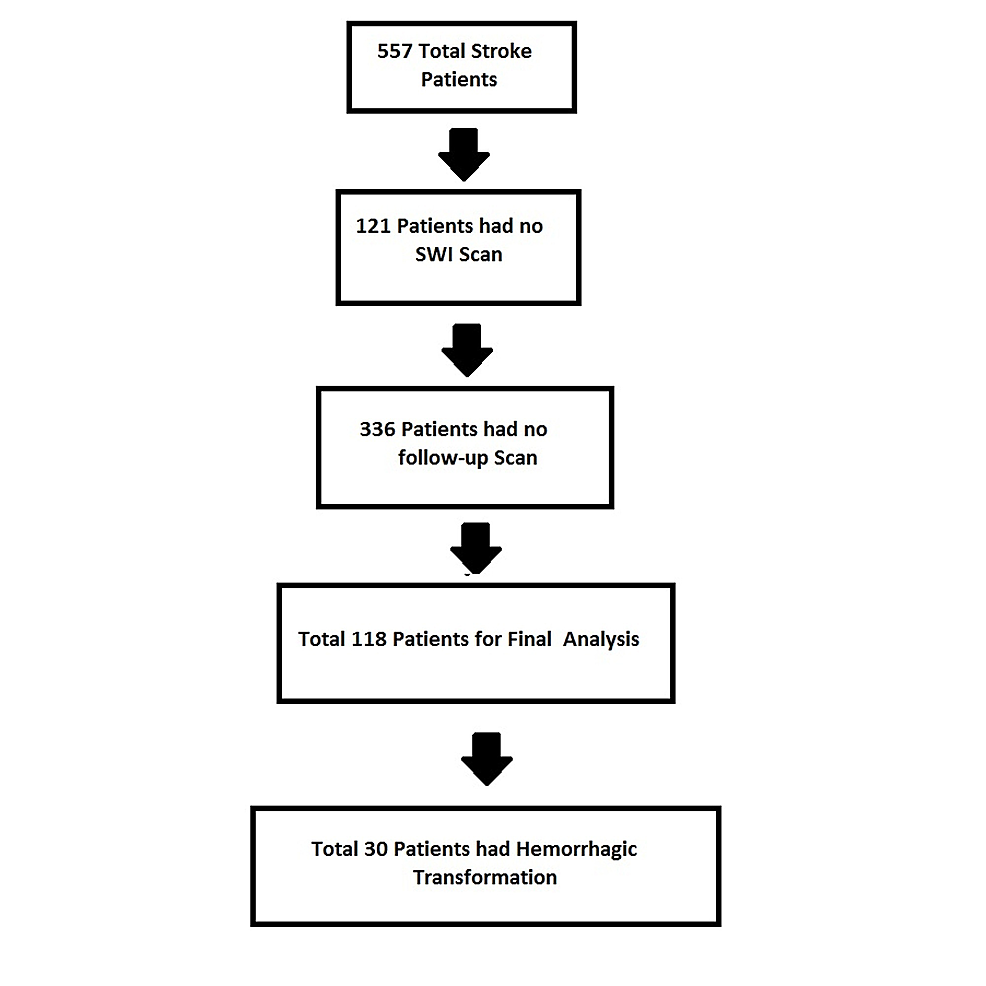 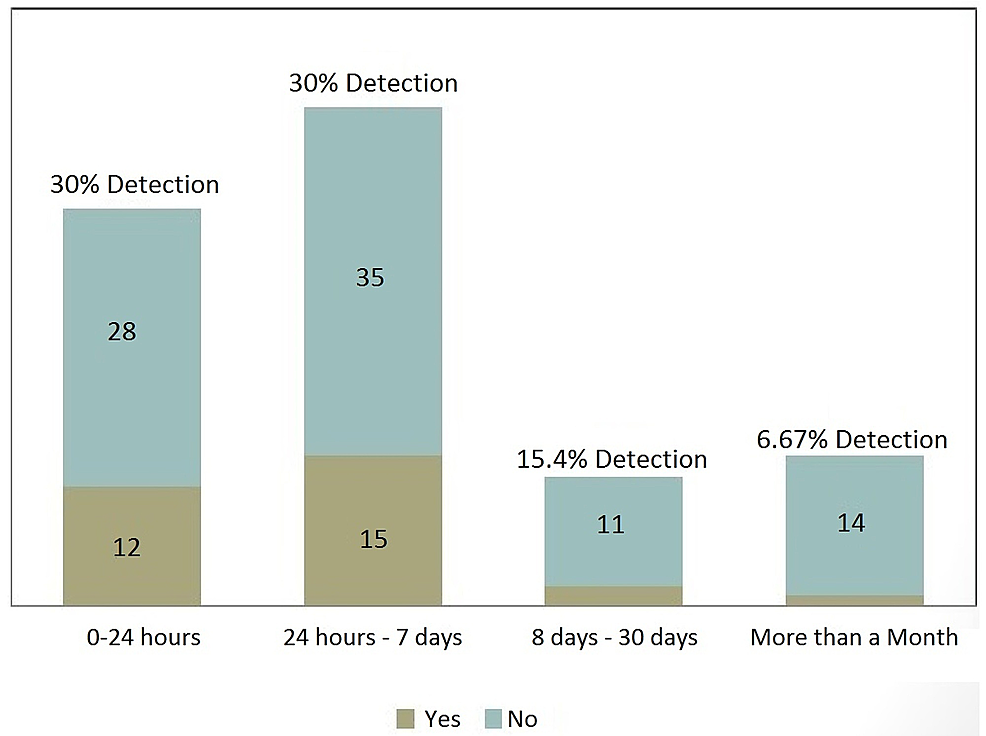 Numerous studies have shown the association of the presence of microbleeds with cognitive decline along with it being a reputed marker of future stroke risk [1]. Developments in neuroimaging have led to a greater understanding of pathophysiology and the risk of intracerebral hemorrhage (ICH) [11]. It was found that despite SWI allowing the identification of approximately twice as many lesions as T2* GRE, this did not change the clinical associations in multivariate analyses [12].

So, we focused our study on SWI imaging and the identification of microbleeds in ischemic stroke patients and on hemorrhagic transformations. We included patients who had an SWI scan done within 24 hours of an ischemic stroke and had a follow-up CT or MRI scan during the stay. Two team members recorded the data on a self-made proforma, keeping the criteria in mind. They recorded the patient’s information, keeping the patients' name confidential, comparing both the scans, and analyzing the data on SPSS.

In our study, 63.6% were male and 33.4% were female ischemic stroke patients with microbleeds but the hemorrhagic transformations were 25.3% and 25.6% in both genders.

Age has been associated with the presence of microbleeds (P<0.001) on an SWI scan according to studies [12], with microbleeds being more frequent with increasing age, from 6% in those aged 45–50 years to 36% in those aged 80 or more [13]. In our study, we found that hemorrhagic transformations were seen most between the age groups of 55-64 (41.7%) and 21% in more than 65 while less transformation was seen in the age group of less than 45-55 (18.2%) and even less in the less than 45 age group (7.1%). Thus, patients with increasing age and microbleeds on an SWI scan should be taken as a risk for hemorrhagic transformation in case of an ischemic stroke.

The detection of hemorrhagic transformation in ischemic stroke patients with microbleeds in the first 24 hours or 24 hours to seven days is a very important clinical factor and a determinant for hemorrhagic transformation that can help a physician to treat patients on time for a better clinical outcome that will improve his quality of life. Another study described the association between hemorrhage burden and a composite endpoint, including death, any loss of function, or cognitive impairment patients with ICH [15].

Our study has some limitations. As we only used SWI scans for the detection of microbleeds, no comparison was made with other scans for detection. Secondly, as the patients' data used consists of patients presenting to our facility only, so a much broader study is needed.

Only identified relatively recently, microbleeds are increasingly appreciated as a marker of underlying disease states and a risk for ischemic and hemorrhagic sequelae and cognitive decline. Microbleeds detected on an SWI scan are a relevant and accurate predictor of hemorrhagic transformations in acute ischemic infarcts and should be added to MRI stroke protocols for the better management and prediction of outcomes.

Human subjects: Consent was obtained by all participants in this study. Institutional review Board issued approval 460-309-2015. The IRB approved the study under Reference number 460-309-2015. Consent to take part was not required according to the study design and it was approved by the institutional review board, as no direct patient interaction was intended. Patient data, including age, gender, co-morbidities, and medications, were directly obtained from institutional patient records after approval from the IRB committee. Further, institute computers were utilized to access images for review. Animal subjects: All authors have confirmed that this study did not involve animal subjects or tissue. Conflicts of interest: In compliance with the ICMJE uniform disclosure form, all authors declare the following: Payment/services info: All authors have declared that no financial support was received from any organization for the submitted work. Financial relationships: All authors have declared that they have no financial relationships at present or within the previous three years with any organizations that might have an interest in the submitted work. Other relationships: All authors have declared that there are no other relationships or activities that could appear to have influenced the submitted work.

© Copyright 2018
Dar et al. This is an open access article distributed under the terms of the Creative Commons Attribution License CC-BY 3.0., which permits unrestricted use, distribution, and reproduction in any medium, provided the original author and source are credited.

The Air Inside Joint: A Sign of Disease Pathology or a Benign Condition?

Diagnostic Accuracy of High-Resolution Computed Tomography of Chest in Diagn ...