Laws and attitudes towards marijuana in the United States (US) are becoming more permissive. Marijuana is the most commonly used illicit drug in the US. The prevalence of marijuana use was 4.1% in 2001-2002 and 9.5% in 2012-2013 in the US [1]. After its legalization in a few states of the US, its use is becoming increasingly popular over time. Marijuana is found to be beneficial for the treatment of numerous health conditions such as cancer, glaucoma, Human Immunodeficiency Virus (HIV)/Acquired Immunodeficiency Syndrome (AIDS), and posttraumatic stress disorder [2]. The active constituent of marijuana is tetrahydrocannabinol, which is a mixed agonist for cannabinoid 1 and 2 receptors (CB1 and CB2) [3]. The activation of the CB1 receptor may increase lipid resistance and promote chronic cardiovascular dysfunction, particularly in obesity [4] and diabetes [5]. In contrast, the activation of CB2 receptors may suppress the inflammatory response and reduce atherosclerosis progression [6-7].

Marijuana use is found to be associated with adverse cardiovascular events. It increases sympathetic nervous system activity, which ultimately increases the heart rate, supine systolic, and diastolic blood pressures, leading to increased myocardial oxygen demand to a degree that the time to exercise-induced angina in patients with a history of stable angina may be decreased [8]. In addition, marijuana has been associated with triggering myocardial infarction (MI) in young male patients. After smoking marijuana, the risk of MI onset increases by 4.8 fold for the first 60 minutes. The annual risk of MI in a daily cannabis user increases from 1.5% to 3% per year [8]. 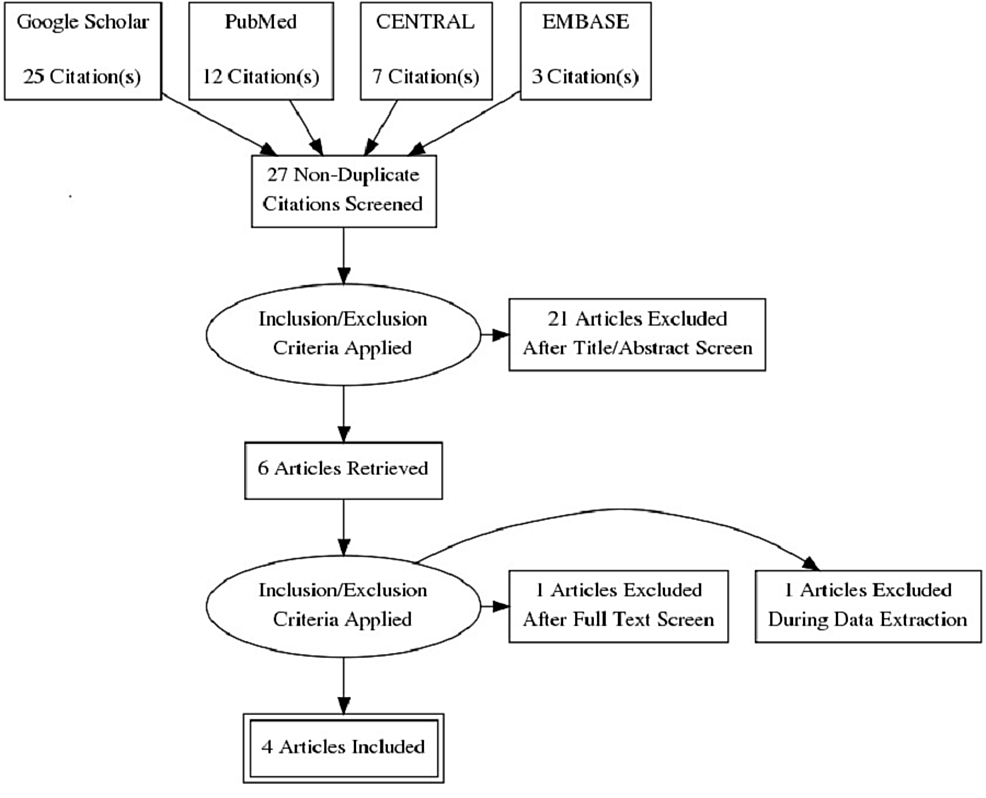 The authors (RRP, SRP, and SM) screened the articles based on the inclusion and exclusion criteria. Full texts were obtained for articles that met the inclusion criteria. The authors developed a data abstraction spreadsheet using Microsoft Excel version 2013 (Microsoft Corp., Redmond, WA, USA) and included the following information: author, year of publication, journal, country where the study was done, study design, sample size, baseline characteristics of the patients, and outcomes in terms of morbidity and mortality. Any discrepancies were solved by consultation with the fourth author DRP.

The study's characteristics are represented in Table 1. All the articles included in this review were of good quality, considering the presence of clear objectives, a clearly mentioned study design, and a clearly described statistical analysis. Four studies were included in this systematic review, with a total of 3,729,840 subjects. All the studies have used their own inclusion criteria. Studies conducted by Desai et al. [9] and Johnson-Sasso et al. [10] were retrospective, whereas Frost et al. [11] and Kenneth et al. [12] performed a cohort study, and they followed the patients for 18 and 3.8 years, respectively. All the studies were conducted in the USA.

Kenneth et al. [12] discovered that marijuana users had three-fold higher mortality in comparison to the nonusers after being adjusted for age and sex, and in fully adjusted models. Compared with the nonusers, the hazard ratios for marijuana usage less than weekly and weekly or more were 2.5 (95% CI, 0.9-7.3), and 4.2 (95% CI, 1.2-14.3), respectively. For cardiovascular mortality and non-cardiovascular mortality, the age- and sex-adjusted hazard ratios with any use were 1.9 (95% CI, 0.6-6.3), and 4.9 (95% CI, 1.6-14.7), respectively. In the same study, while comparing 42 marijuana users and 42 other patients matched on propensity scores, there were six deaths among marijuana users and one among non-users (log-rank p = 0.06).

Besides, in a study conducted by Vin-Raviv et al. [13] among cancer patients (n = 387,608), odds of in-hospital mortality was found to be significantly reduced among marijuana users compared with non-users (OR: 0.44, 95% CI: 0.35-0.55). In the same study, they also established that marijuana use was associated with significantly reduced odds of heart failure and cardiac disease compared with non‐users.

Marijuana is becoming increasingly available to the general population after its legalization in several states of the USA. As both medical and recreational use of marijuana is increasing, the knowledge and attitude among healthcare workers and patients about marijuana are important. Both healthcare providers and patients must carefully balance the anticipated benefits and the established health risks.

In our review, two out of four studies are cohort studies, and both studies found that marijuana use was associated with higher folds of mortality. It is in contrast with two retrospective studies that demonstrated decreased all-cause mortality following MI. Since retrospective studies cannot establish a causal relationship, at this point, we cannot conclude if marijuana is beneficial or harmful, which remains a major limitation of our review. Nevertheless, the results of our review should not be neglected. Further large cohort study with sufficient follow-up time is required to establish the causal relationship between marijuana use and the outcomes following MI. Additionally, clinical trials on supplementation of medical marijuana in MI patients can be done to observe the direct effect. But conducting a randomized controlled trial (RCT) by supplementing medical marijuana will raise an ethical issue. Hence, RCT seems to be impractical at this point in time.

The major limitations of the included studies are represented in Table 3. All the studies have included the patients with MI who were admitted to the hospital. Hence, the possibility of unmeasured or residual confounding was not ruled out in all four studies. In the retrospective studies of Desai et al. [9] and Johnson-Sasso et al. [10], patients were not followed up to evaluate the long-term outcomes of marijuana in MI patients.

Table 3: Major limitations of the study

The present work is, to our best knowledge, the most comprehensive systematic review of the latest four studies, allowing a direct review of marijuana use and outcomes in patients with MI. Despite a relatively small number of the available original studies, the number of patients included in these studies was large.

To conclude, this review has found that in-hospital mortality in patients with MI was significantly reduced among marijuana users compared with non-users in retrospective studies but not in cohort studies. However, we could not conclude whether the outcomes of retrospective studies occurred due to a direct causal relationship or by chance. Therefore, additional large cohort studies and clinical trials are required to establish the relationship.

© Copyright 2018
Pradhan et al. This is an open access article distributed under the terms of the Creative Commons Attribution License CC-BY 3.0., which permits unrestricted use, distribution, and reproduction in any medium, provided the original author and source are credited.

Table 3: Major limitations of the study