A 60-year-old male presented with growth over the glans penis for two months associated with pain. There was no history of contact bleeding. The patient was not circumcised. He had noticed a swelling on the scrotum for the past six months. On examination, there was a 2 x 3 cm ulceroproliferative growth over the glans extending over the corona onto the shaft of penis. The ulcer was fixed to the ventral aspect of glans penis with induration proximally extending up to mid shaft of penis (Figure 1). 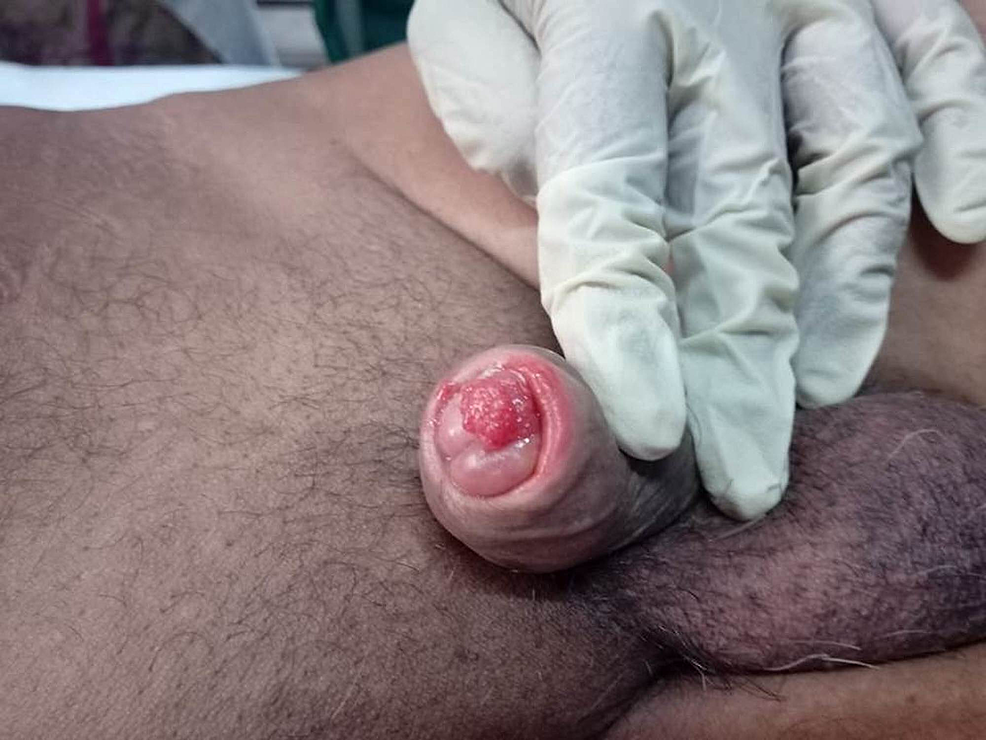 Bilateral inguinal lymph nodes were palpable, 3-4 on each side, 0.5 cm in size, firm and mobile in nature. The patient also had a right-sided primary vaginal hydrocele. A clinical diagnosis of SCC of penis was made and a wedge biopsy done. Histopathological analysis revealed an ulcerated stratified squamous epithelial lining with underlying lesion composed of fascicles of spindle cells with moderate pleomorphism. These were very few in number to proceed with IHC stains. A possibility of a primary sarcoma of penis was suggested.

Total penectomy with perineal urethrostomy was performed. The hydrocele was aspirated under aseptic precautions, three days before surgery. Post-operative course was uneventful. The patient was discharged on the eighth post-operative day and was advised to follow up with the regional cancer center for further management. 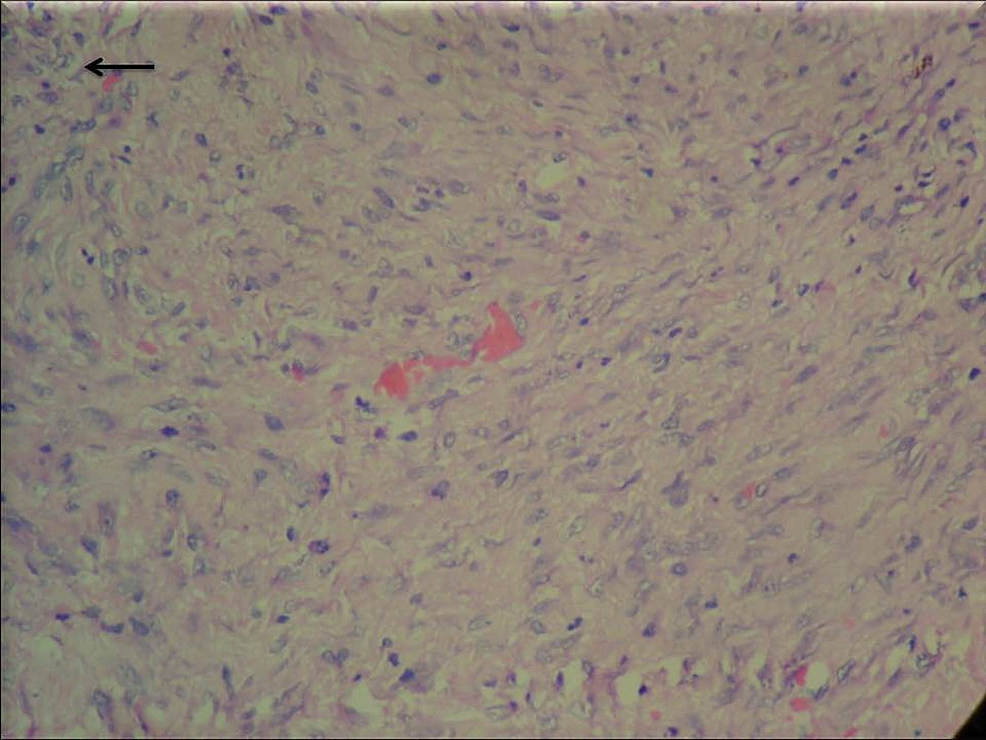 The tumor cells were strongly positive for pancytokeratin and vimentin, and negative for epithelial membrane antigen (EMA), neuron-specific enolase, CD 34, S100, Melan A and HMB 45 (Figure 3). 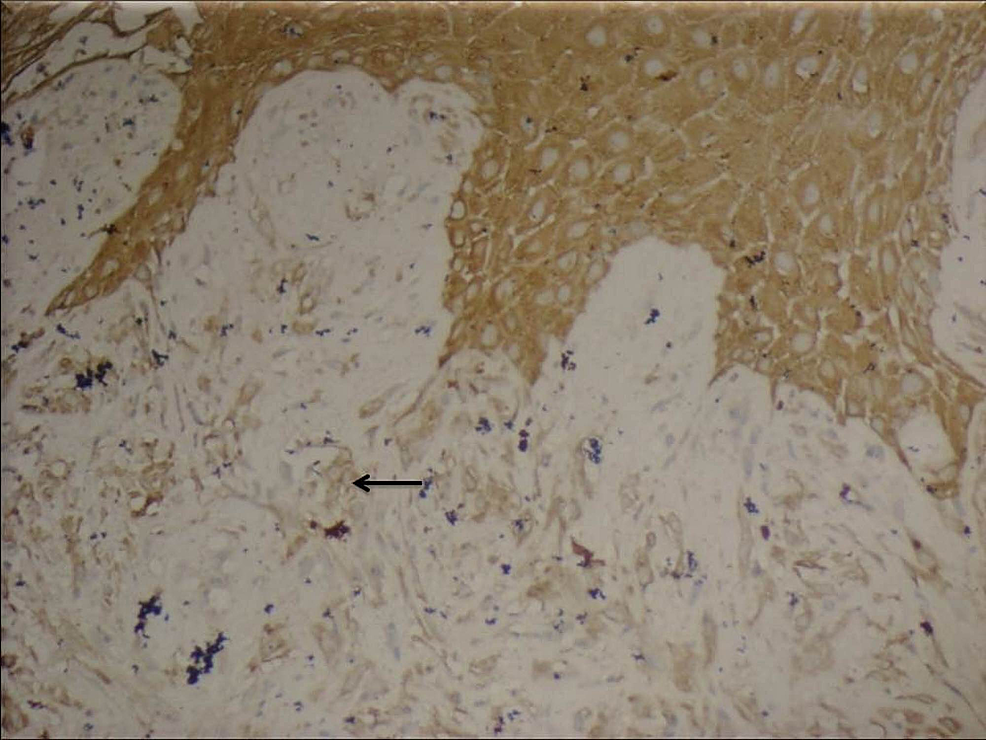 The final report was sarcomatoid carcinoma (spindle cell carcinoma) of penis involving the glans. The urethra, proximal resected skin and shaft were free of tumor.

Sarcomatoid SCC is unusual, large and aggressive tumors associated with high rate of lymph node metastasis and poor outcome [2]. The patient presented with an ulceroproliferative lesion over the glans which was initially diagnosed as SCC of the penis. He also had bilateral inguinal nodes, fine needle aspiration of which showed reactive hyperplasia. The initial wedge biopsy was reported as primary sarcoma of penis.

The microscopic diagnosis of sarcomatoid SCC of the penis can be difficult. Since dysplastic changes or carcinoma in situ (CIS) in the overlying epithelium is often absent and/or microscopic examination of the epithelium is hampered due to ulceration, small biopsies are usually inadequate to establish the correct diagnosis. Moreover, small biopsies may consist solely of atypical spindle cells. All this may lead to an erroneous diagnosis of sarcoma, as in this case. The final biopsy was reported as sarcomatoid SCC.

Controversy still exists about the exact histogenesis of the spindle cell component in sarcomatoid carcinoma, irrespective of its anatomical site. This explains why this type of carcinoma has been referred to by varied terminologies, such as Carcinosarcoma, Spindle cell carcinoma, Pseudosarcoma and Metaplastic carcinoma [4]. However, most authors believe that the sarcomatoid component develops from the carcinomatous areas by metaplasia or dedifferentiation, or more precisely by a premature block in differentiation towards a squamous phenotype. Based on this hypothesis, the two components are considered to originate from the same stem cell [5, 6].

Sarcomatoid SCC is a rare malignancy of the penis and can present with clinical features of conventional SCC. It is difficult to differentiate clinically from conventional malignancy. Histopathological examination along with IHC stains offers the definitive diagnosis.

© Copyright 2018
Sri Aurobindo Prasad et al. This is an open access article distributed under the terms of the Creative Commons Attribution License CC-BY 3.0., which permits unrestricted use, distribution, and reproduction in any medium, provided the original author and source are credited.