Published via the Stanford Neurosurgery Channel.

We retrospectively reviewed prospectively collected functional outcomes data on 10 patients with a degenerative lumbar disease who underwent cortical screw placement by the senior author. Oswestry Disability Index (ODI) and Roland Morris (RM) scoring were calculated preoperatively, at six to 12 weeks and at six to eight months. The Kruskal-Wallis test and Dunn’s multiple comparison were used to analyze differences in scores over time.

We found that over time, cortical screw fixation resulted in a mean decrease of 27 from the baseline ODI at six to eight months (p = 0.014). Additionally, six out of seven (86%) patients who had at least 12 months of radiographic follow-up showed fusion.

Pedicle screw fixation has been the mainstay technique for greater than 120,000 lumbar fusions performed in the United States every year [1]. However, the technique is invasive and requires significant lateral dissection to achieve the proper lateral to medial screw trajectory. This is particularly problematic in larger or overweight patients, resulting in longer incisions, extensive muscle dissection, and longer operative times. In recent years, a less invasive technique has been developed whereby screws are placed at the junction of the superior articular process and pars, angling more superiorly in a medial to lateral trajectory to achieve pedicle fixation. This technique is called cortical screw fixation.

There have been numerous studies examining the biomechanical properties of the cortical bone trajectory versus the traditional pedicle screw trajectory, overall showing the equivalence or superiority of cortical screws [2-12]. A study by Matsukawa et al. showed that cortical bone trajectory screws demonstrated a 26.4% greater mean pullout strength (p = 0.003) compared to pedicle screws. They also showed a 27.8% increased stiffness (p < 0.5) during cephalocaudal loading and 140.2% showed increased stiffness (p < 0.001) during mediolateral loading.

This study is a retrospective review of prospectively collected data of patients who underwent cortical bone trajectory screw placement by the senior author at a large county hospital. Cortical bone trajectory pedicle screw placement is the standard of care for all patients at our institution operated on by the senior author with a lumbar degenerative disease requiring instrumented fusion of one to three levels. Patients with a pedicle diameter lower than seven millimeters on computed tomography (CT)/magnetic resonance imaging (MRI) receive instrumented fusion using traditional trajectory pedicle screw placement. Indications for fusion include unstable spondylolisthesis (instability on flexion-extension) and spondylolisthesis over grade two. An interbody graft is placed if there is a collapse of the disc space with resulting neuroforaminal stenosis.

A total of 10 patients were included in this study and underwent cortical trajectory screw placement. Informed consent was obtained from all patients prior to their procedure, which included consent for sharing intraoperative images and videos for teaching/publication purposes. All patients undergoing spinal surgery at Santa Clara Valley Medical Center (SCVMC) are encouraged to fill out functional outcome questionnaires before and after surgery in the clinic as the standard of care. The data is collected prospectively in real time in the patients’ electronic medical record. Institutional review board permission was obtained through SCVMC (#17-027) prior to analyzing any patient data, all of which was appropriately de-identified to comply with Health Insurance Portability and Accountability Act (HIPAA) protocols.

The cortical screw technique requires significantly less muscle and lateral dissection, as well as a smaller longitudinal incision, as compared to traditional pedicle screw fixation. The starting point for cortical screws is at the junction of the superior articulating process and pars interarticularis, with a medial to lateral angulation (approximately 10 degrees lateral in the axial plane), and 25 degrees cranially in the sagittal plane. Actual angulations vary and were delineated by intraoperative fluoroscopy. A seven-millimeter minimum pedicle diameter cut-off was used in order to safely perform cortical screw fixation without lateral vertebral body breach or pedicle fracture. Arthrodesis was performed over the facet joints and in some cases of significant disc collapse, posterior lumbar interbody fixation (PLIF) using allograft was performed to restore disc height and decompress the neuroforamina.

We examined functional outcomes in our cohort of patients at six to 12 weeks and six to eight months after cortical screw placement. Functional outcomes were measured by the Oswestry Disability Index (ODI) and Roland Morris (RM) disability questionnaire. The Kruskal-Wallis test and Dunn’s multiple comparison were used to analyze changes in disability measurements over time and at fixed intervals, respectively. A p-value of less than 0.05 was considered statistically significant. GraphPad Prism v 6.0 (GraphPad Software Inc., San Diego, California, US) was used to conduct all statistical analyses. Fusion was independently assessed by a neuroradiologist on anterior-posterior (AP) and lateral X-rays as well as flexion-extension films of the spine. Fusion was assessed by the presence of bridging bone between the intended levels of fusion, as well as stability on flexion-extension X-rays.

A total of 10 patients were included in the study and underwent cortical screw fixation. The mean age was 56 years, 40% were women, 50% smoked earlier, and the mean preoperative ODI was 70 while the mean preoperative RM was 15.3 (Table 1). Clinically, all patients presented with back pain and radicular pain. Flexion and extension films demonstrated spinal instability. Neuroforaminal stenosis, degenerative joint disease, and central stenosis were the predominant findings on MRI.

Overall, it was found that patients who underwent cortical screw fixation had decreases both in their mean ODI and RM score over time (Figures 1-2). 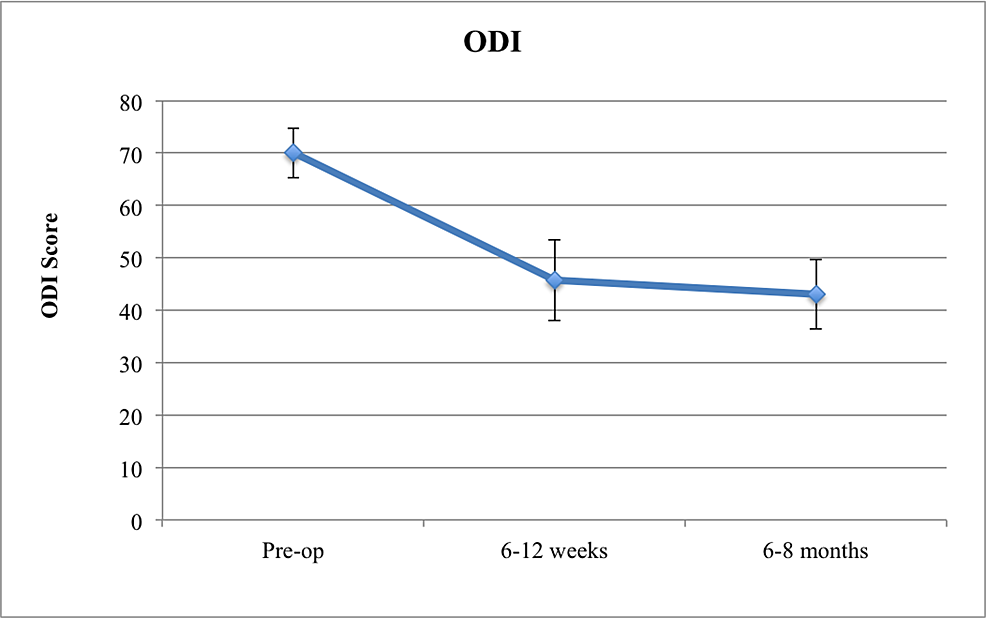 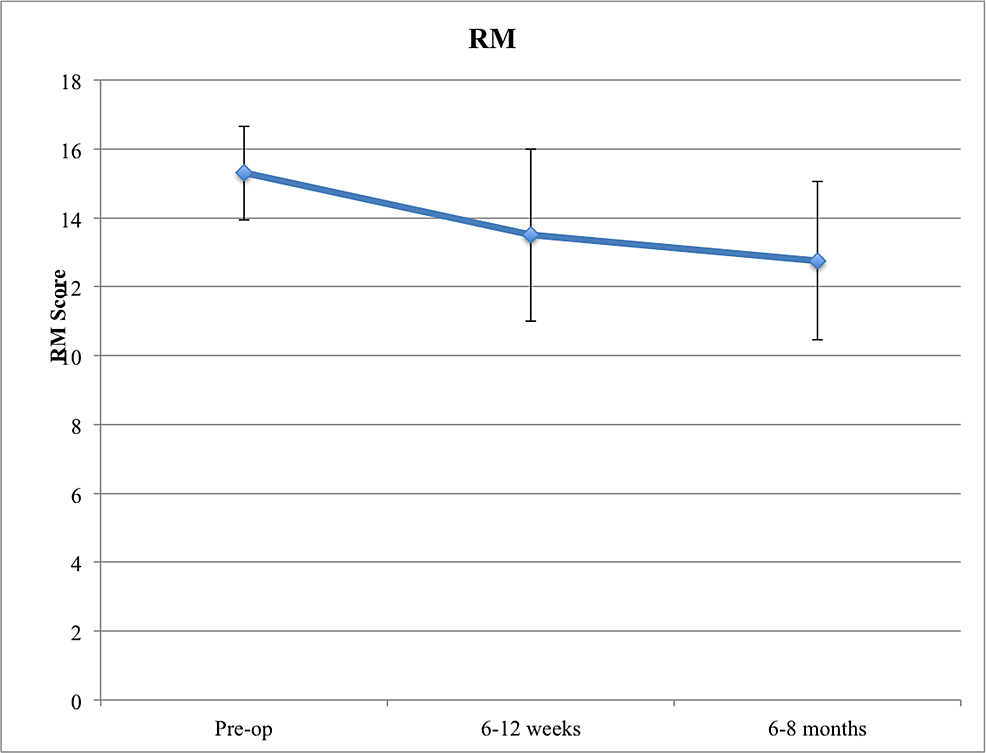 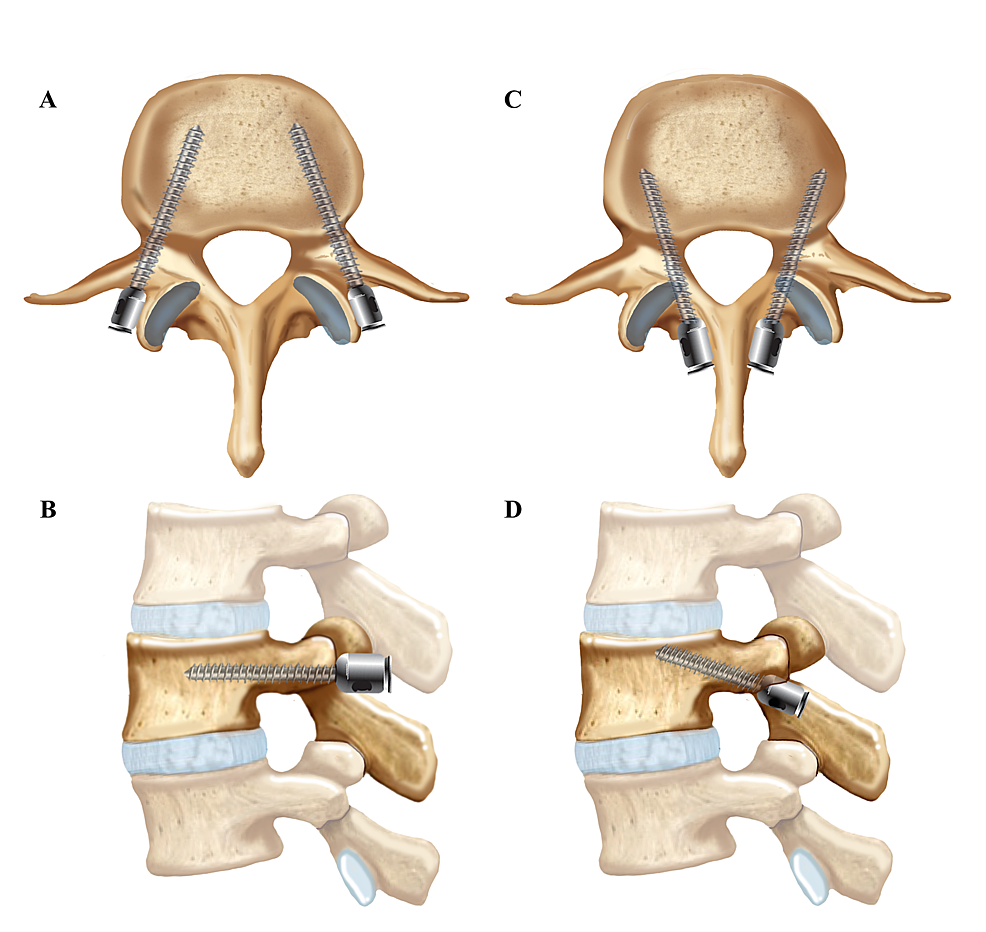 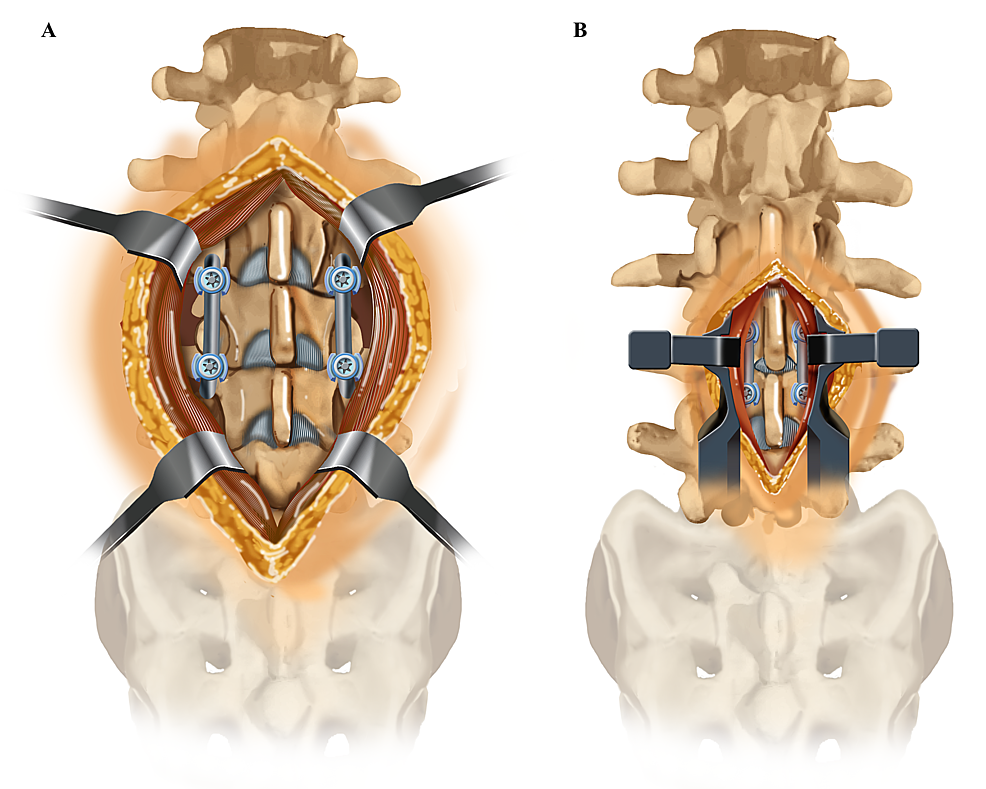 We found that cortical screw fixation results in a statistically significant functional improvement for patients with a lumbar degenerative disease and spinal instability as measured by ODI. Specifically, we found that, on average patients who underwent cortical screw fixation experienced a decrease of 27 from the baseline ODI at six to eight months follow-up. The majority of the functional improvement was seen by the six to 12 weeks follow-up, as patients reported a change in the baseline ODI of -24.25 by that mark. This early improvement shows that approach-related discomfort from this less invasive technique resolves early and that the rigid spinal fixation accorded by cortical trajectory screws is very effective at immobilizing the spine and reducing the pain stemming from spinal instability.

Although our present study reported progressive decreases in RM scores with cortical screw fixation, the average decrease was not found to be statistically significant. In general, while RM and ODI scores are the two predominant scales used to assess functional disability from back pain, it has been noted by Roland et al. that ODI scores are better for assessing functional outcomes in patient populations with a chronic severe disability like ours [16]. Overall, the ODI is considered by many as the gold standard for measuring the degree of disability and estimating the quality of life in a person with low back pain, as it more fully captures the psychological and social problems associated with chronic low back pain [17].

Traditional pedicle screw fusion rates have been cited as high as 96.3% by Sakura et al. and were found to be 89.5% with PLIF by Lee et al. Our fusion rates were 86% (six out of seven) in patients who had at least one year of radiographic follow-up. Our overall fusion rate was 70% (seven out of 10) with a mean follow-up of 14.7 months. Despite their lower fusion rate, our patients had excellent functional outcomes at six to eight months after surgery. This suggests that even in the absence of radiographic fusion, cortical screws are more than adequately immobilizing a joint, resulting in less pain and thus better outcomes. Further support for this notion comes from the fact that even in the case of our three patients that did not show radiographic fusion (two partial, one no fusion), none showed signs of instability on imaging as defined by movement on flexion-extension, haloing around screws, and screw pullout or fracture.

There are some limitations to our study, including the lack of randomization and the small sample size. This is also a single-institution study, with all surgeries performed by a single surgeon only. Future randomized studies with a greater number of patients and longer follow-up will be needed to firmly establish cortical trajectory pedicle fixation as a first-line option for lumbar spinal fixation in degenerative spine disease.

Human subjects: Consent was obtained by all participants in this study. Santa Clara Valley Medical Center issued approval 17-027. Institutional IRB permission was obtained through Santa Clara Valley Medical Center (SCVMC) prior to analyzing any patient data, all of which was appropriately de-identified to comply with HIPAA protocols. Animal subjects: All authors have confirmed that this study did not involve animal subjects or tissue. Conflicts of interest: In compliance with the ICMJE uniform disclosure form, all authors declare the following: Payment/services info: All authors have declared that no financial support was received from any organization for the submitted work. Financial relationships: All authors have declared that they have no financial relationships at present or within the previous three years with any organizations that might have an interest in the submitted work. Other relationships: All authors have declared that there are no other relationships or activities that could appear to have influenced the submitted work.

© Copyright 2018
Chen et al. This is an open access article distributed under the terms of the Creative Commons Attribution License CC-BY 3.0., which permits unrestricted use, distribution, and reproduction in any medium, provided the original author and source are credited.