To evaluate acute and late genitourinary (GU) and gastrointestinal (GI) toxicity and the biochemical control of pure hypofractionated radiotherapy (without acceleration) for the treatment of prostate cancer.

Pure hypofractionation seems to be associated with low toxicity rates and biochemical control rates that are similar or better than those observed with accelerated hypofractionated or conventionally fractionated therapy.

Pre-treatment evaluations included a transrectal ultrasound-guided biopsy, histologic confirmation of disease, and Gleason scoring. Laboratory studies included a serum PSA measurement within four months prior to the start of radiation therapy. All patients were required to have a diagnostic or planning computed axial tomography (CT) scan of the pelvis within 10 weeks of the start of treatment. For those patients with PSA > 15 or Gleason 7, a bone scan was required within four months of treatment.

All patients were CT simulated and treated in the supine position with a full bladder and an empty rectum. The planning target volume (PTV) was defined as the clinical tumor volume (CTV) plus a 1.0 cm margin in all directions except posteriorly, where a 0.7 cm margin was applied. The PTV was covered by the 95% isodose line. Image-guided radiotherapy (IGRT) was used in all cases. Radio-opaque fiducial markers and orthogonal kV-kV matching, or cone beam CT (CBCT) localization, was used. Of the patients, 66% were treated with three-dimensional conformal radiotherapy (3D-CRT), and all patients treated after 2008 (34%) were treated with IMRT.

Patients were assessed weekly during radiation therapy, three months after completion of radiotherapy, every six months for five years, and then annually. The acute period was defined as during treatment and three months after the completion of treatment, and the late period was defined as six months after completing treatment and beyond. Acute and late GU and GI toxicity grading were performed at each follow-up in accordance with the Radiation Therapy Oncology Group (RTOG) toxicity scales. The patients were categorized according to their highest toxicity value throughout the acute follow-up period and the late follow-up period. Biochemical failure (BF) was defined according to the Phoenix definition of a PSA nadir plus two. The presence of progression to metastatic disease was also included in the analysis.

Two hundred and nine patients (53 low risk and 156 intermediate) were treated between September 2005 and May 2009. The median follow-up time was 6.5 years. The demographics and clinical characteristics for this patient population are summarized in Table 1.

Table 1: Demographics of the population

A summary of acute and late toxicity events greater than or equal to RTOG grade 2 can be found in Table 2. 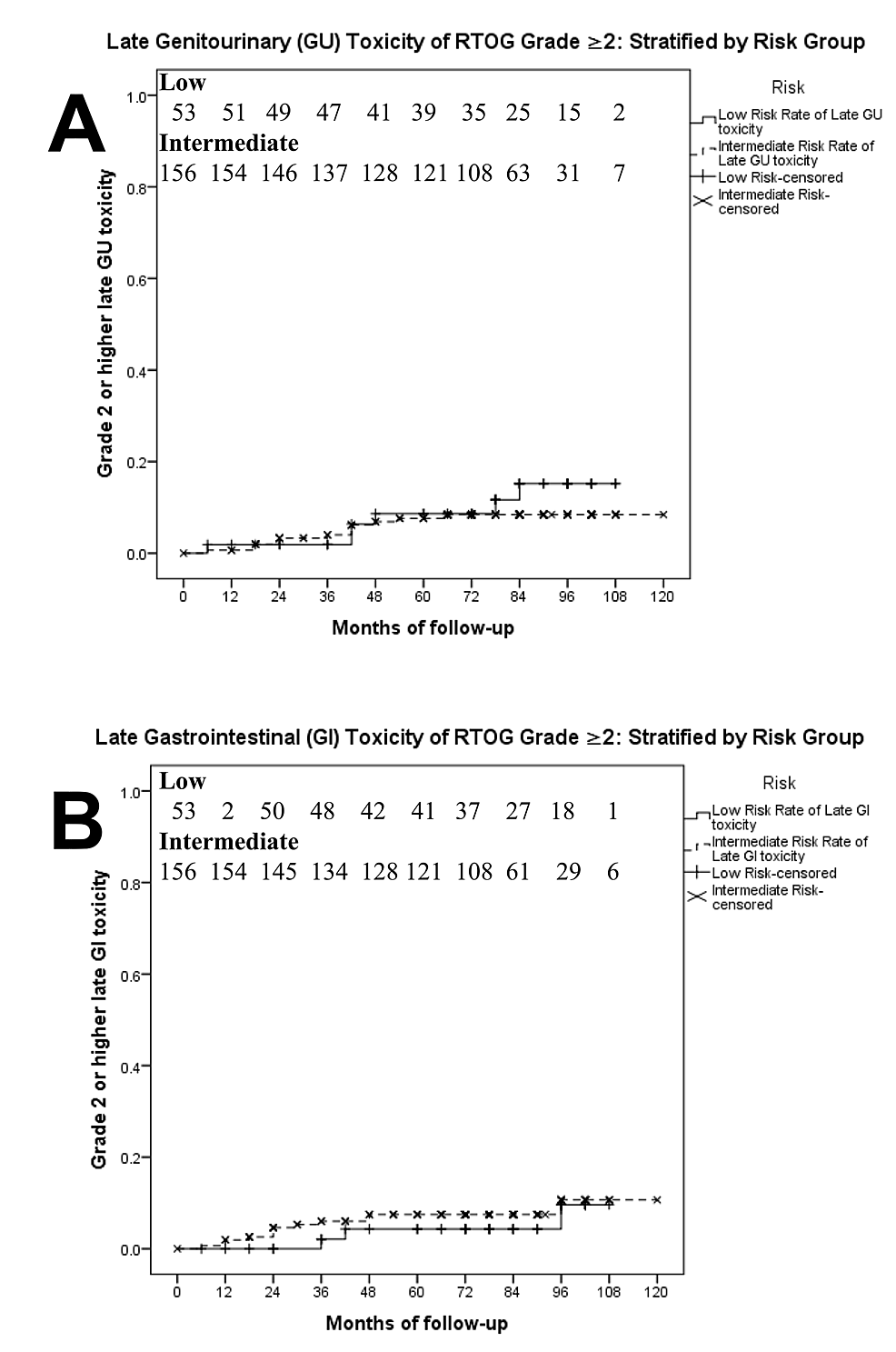 At the time of analysis, 54 patients (26%) had experienced BF; nine had a low-risk disease and 45 had an intermediate-risk disease. Further patient characteristics and clinical information regarding disease progression can be found in Table 1. The freedom-from- biochemical failure (FFBF) curves can be found in Figures 2A-2B. The five-year FFBF rate for the study population was 81%. The five-year FFBF rates for low-risk patients was 85%, and for the intermediate-risk group, the five-year FFBF was 80%. The difference between the risk groups was not statistically significant (p > 0.05), but there appears to be a divergence between the curves beginning at five years. The actuarial results for freedom-from-metastatic-disease are found in Figures 2C-2D. All patients with metastatic disease (11) experienced BF before progression. 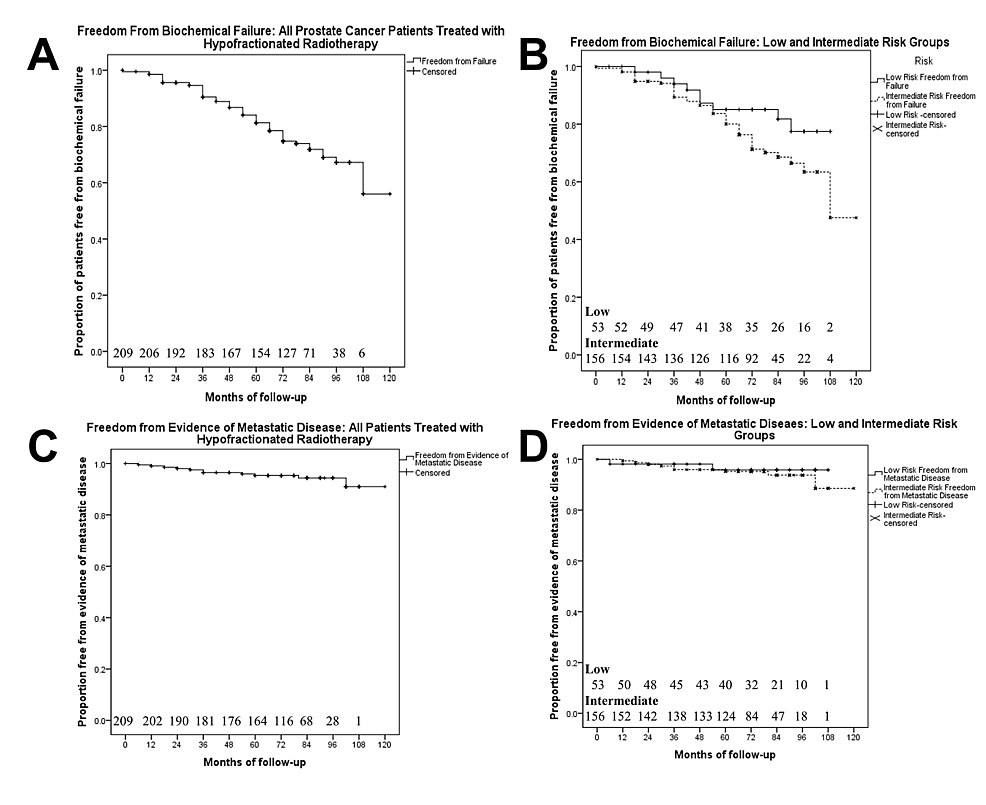 Figure 2: Freedom from biochemical failure using the Phoenix Definition (A, B) and freedom from evidence of metastatic disease (C, D) in men treated with hypofractionated radiotherapy (n = 209) in the total trial population (A, C) and stratified into low (n = 53) and Intermediate (n = 156) risk groups (B, D)

In recent years, hypofractionation has been gaining acceptance in the literature. Jack Fowler popularized the theory that prostate cancer has a low α/β. An α/β of 1.5 would suggest that a regimen of 60 Gy in 20 fractions should have biochemical control and toxicity profiles similar to a standard schedule of 78 Gy in 39 fractions, so we chose to use this regimen with our intermediate patients [22-23]. At the time the study protocol was written, there was limited evidence for dose-escalated radiotherapy in low-risk patients and 70 Gy in 35 fractions was our institutional standard. The equivalent dose of 50 Gy in 15 fractions was chosen for low-risk patients.

FU = Median follow-up time for all patients, in years.

With accelerated hypofractionation and conventional fractionation schedules, there are 24 hours between fractions. Our pure hypofractionation schedule allows for 48-72 hours for interfraction repair. Our rate of acute toxicity (Table 2) was low, with 11% reporting grade > 2 GU toxicity (including one grade 4 acute GU toxicity) and 6% reporting grade ≥ 2 GI toxicity (no grade 3 or 4). A recent Canadian trial in London also investigated a 20-fraction regimen (Lock et al. in Table 3). Acute Grade ≥2 toxicity was 43% for GU and 36% for GI symptoms [16]. Importantly, this trial used 3.16 Gy/fraction and our trial used 3 Gy/fraction in the intermediate-risk group and 3.33 Gy/fraction in the low-risk group.

With a median follow-up of 6.5 years, this study reported five-year FFBF rates (Figure 2B) of 85% for low risk (50 Gy in 15 fractions over seven weeks) and 81% for Intermediate risk (60 Gy in 20 fractions over eight weeks). With a median follow-up of six years, PROFIT reported five-year biochemical disease-free survival rates of 85% for both the short fractionation arm and standard fractionation [14]. The CHHiP trial (median follow-up 50.5 months) reported five-year FFBF rates of 88.3%, 90.6%, and 85.9% in the 74 Gy, 60 Gy, and 57 Gy treatment groups, respectively [10]. The PMH cohort study reported that FFBF at five years was 81% in the 60 Gy cohort and 88% in the 66 Gy cohort (median follow-up was 128 months for 60 Gy and 108 months for 66 Gy) [26]. These studies confirm a high rate of biochemical control with hypofractionated radiotherapy, but longer-term outcomes are required for this risk category of prostate cancer [30]. See Table 3 for a summary of biochemical control statistics from each trial.

Our trial spanned a period where image guidance and the use of IMRT was being introduced. Sixty-six percent of the patients on our trial were treated with 3D-CRT. Newer IMRT techniques may reduce differences in toxicity between pure and conventional hypofractionation.

It is not possible to make direct comparisons of our results with other trials, so we must be cautious in our interpretations. Nonetheless, the low rates of toxicity observed here are promising and might encourage a further exploration of pure hypofractionation. The London study explored standard hypofractionation over four to five weeks, and there were similarities between our trial and the London trial in terms of technology, margin recipes, dose constraints, and patient characteristics [16]. A comparison to this study might allow us to explore whether pure hypofractionation provides similar biochemical control but with lower toxicity. In particular, is pure hypofractionation possibly better for those at higher risk of a rectal consequential late injury? This difference is wide enough that a relatively small trial would have sufficient statistical power to detect a difference.

Pure hypofractionation is feasible and may provide a simple method to minimize the risk of toxicity. The five-year biochemical control rates are similar, and the acute toxicity appears to be lower compared to published studies. Although not randomized, this trial suggests that pure hypofractionation could be considered a reasonable alternative in patients who are risk-averse, with higher risk dosimetry, with a higher risk for rectal toxicity, or elderly patients. Pure hypofractionation should be further tested in a randomized control trial.

Human subjects: Consent was obtained by all participants in this study. Tri-Hospital Research Ethics Board issued approval THREB#120(1)05. The protocol was approved by our institutional research ethics board. Written informed consent was obtained from all participants. Animal subjects: All authors have confirmed that this study did not involve animal subjects or tissue. Conflicts of interest: In compliance with the ICMJE uniform disclosure form, all authors declare the following: Payment/services info: Funding for this study was provided by Grand River Motorcycle Ride for Dad. . Financial relationships: All authors have declared that they have no financial relationships at present or within the previous three years with any organizations that might have an interest in the submitted work. Other relationships: All authors have declared that there are no other relationships or activities that could appear to have influenced the submitted work.

We would like to thank Grand River Motorcycle Ride for Dad for providing funding for this study. We would also like to thank all of the physicians, nurses, and staff at Grand River Regional Cancer Centre who assisted in patient screening, participant recruitment, and data collection. We would like to acknowledge Dilip Panjwani for developing the original idea of pure hypofractionation, the initiation and conduct of the study, and for entering the bulk of the study participants.

© Copyright 2018
Gopaul et al. This is an open access article distributed under the terms of the Creative Commons Attribution License CC-BY 3.0., which permits unrestricted use, distribution, and reproduction in any medium, provided the original author and source are credited.

Figure 2: Freedom from biochemical failure using the Phoenix Definition (A, B) and freedom from evidence of metastatic disease (C, D) in men treated with hypofractionated radiotherapy (n = 209) in the total trial population (A, C) and stratified into low (n = 53) and Intermediate (n = 156) risk groups (B, D)

Table 1: Demographics of the population

FU = Median follow-up time for all patients, in years.