Herniations of the brain and/or meninges through an opening of the skull often occur through the foramen magnum, e.g., Chiari malformations and encephaloceles. The herniation of brain matter through the cribriform plate is a rare incident and has not been reported frequently. The presence of such an occurrence still requires attention and anatomical understanding. This review will examine the potential causes of cribriform plate herniation and its distinguishability to nasal encephaloceles. The sloping of brain tissue toward potential space/opening in response to elevated pressures in the cranium to accommodate for the added pressure are features seen in herniation. The presence of a pedicle and stalk seen in an encephalocele define its characteristics, which are not visible in a ‘classical’ herniation. Cerebrospinal fluid (CSF) fistula commonly occurs at the cribriform plate, and due to the structural weakness, a pathway is formed. This is often seen in conjunction with meningoceles. Delineating between herniation and encephaloceles is important for both clinicians and neurosurgeons.

Brain herniation describes the protrusion of brain tissue through an opening through the skull often when the fixed volume of the cranium is unable to compensate for an increase in intracranial pressure (ICP). The increases in pressure are commonly due to space-occupying lesions, such as tumors, hemorrhage, cerebral edema, or inflammation. Normally, the brain will try to counteract the added volume by decreasing volume elsewhere in order to maintain equilibrium; shifting CSF or reducing venous blood flow may accomplish this, i.e., the Monro-Kellie doctrine. The herniation of brain tissue is more commonly observed traversing the foramen magnum, tentorial incisura, and subfalcine space [1-2].

Herniation through structural openings of the cribriform plate is viewed more so as a downward sloping of tissue matter comprised of brain and/or meningeal tissue (Figure 1). The causes of herniation can be congenital or acquired. Congenital herniation is thought to be due to an error with the development of the mesoderm, whereas acquired forms of brain herniation are secondary to traumatic or iatrogenic origins. Herniation through the anterior cranial fossa and through the cribriform plate requires rigid reconstruction with a multilayer repair being necessary in these patients in order to avoid spinal fluid leakage [2]. 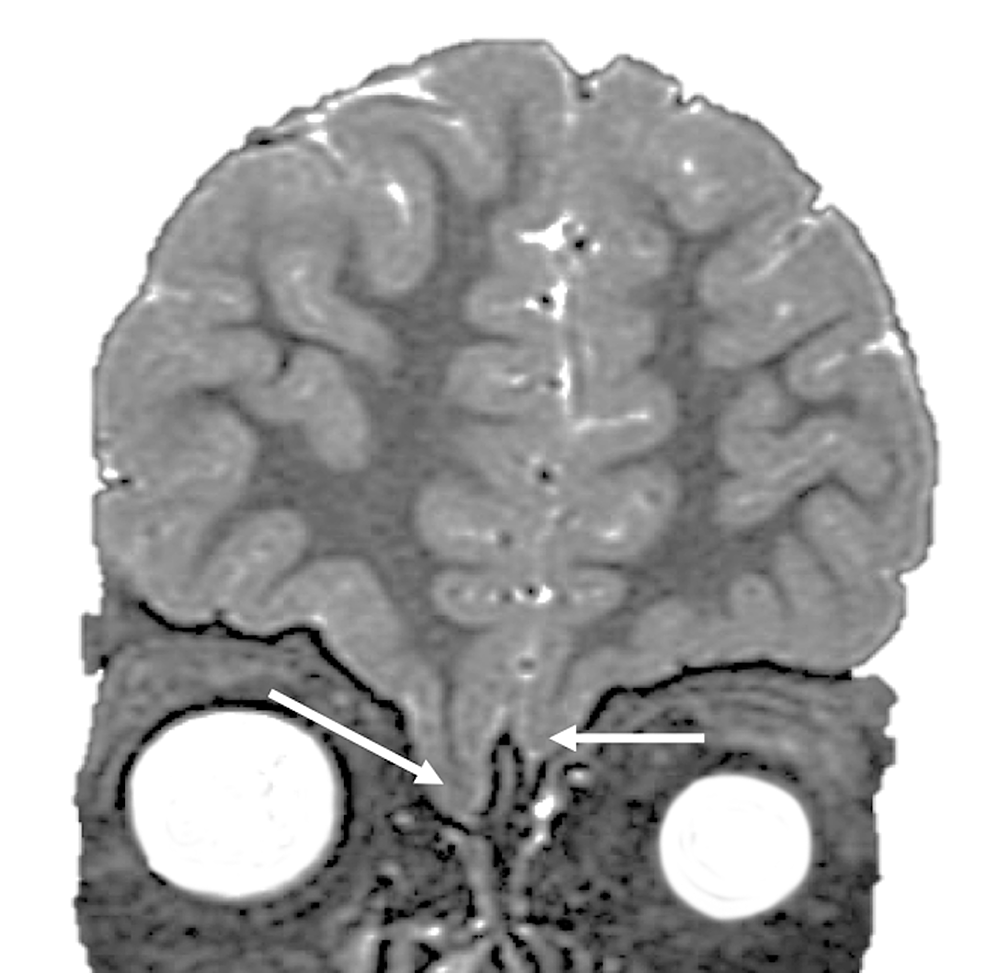 Note the brain tissue on the right side is more herniated when compared with the left side, which is also herniated (arrows).

Delineating between herniation and encephalocele is not clear-cut; there are apparent overlaps. However, this review will outline key defining differences. Encephalocele is the herniation of a sac appearing as a pedicle with a stalk, containing meninges and/or brain tissue [7]. By taking the path of least resistance, encephaloceles can protrude through weakened bony structures of the skull [8]. The dura mater surrounding encephaloceles is described as being thinner and irregular compared to the normal dura mater. The size of the encephalocele is important in terms of the surgical approach taken—smaller sacs are invaginated and the dura mater is sutured, while larger sacs are excised. In order to excise the encephalocele, the neck of the sac needs to be secured and in order to allow access to this area, a craniotomy is performed [9].

The cribriform plate is vulnerable to CSF leaks due to the thin nature of the bone, creating a structural weakness and forming a pathway for potentials leaks. These patients may present with CSF rhinorrhea or meningitis. With a spontaneous CSF fistula, there is a high rate of a coexisting meningoencephalocele, which are often found incidentally during magnetic resonance imaging (MRI) imaging when evaluating CSF leaks. These fistulas are more common in middle-aged obese females, typically fitting the signs and symptoms similar to idiopathic intracranial hypertension (IIH). Other pathogeneses include abnormal absorption of CSF by arachnoid granulations, empty sella syndrome, and destruction of olfactory components in the cribriform plate or pituitary gland allowing for extra space for the extension of the arachnoid space [12]. Alonso et al. proposed that the occurrence of CSF fistula is multifactorial with a combination of both increased intracranial pressure with atrophy of the cranial base (pneumatization of bone, thinning cortical bone, and progressive destruction) [2, 12].

Herniation through the cribriform plate may be due to the congenital weakening of it or may be secondary to increased intracranial pressure. Clinicians and neurosurgeons should be aware of the similarities and differences between these pathological entities and encephaloceles.

© Copyright 2018
Rai et al. This is an open access article distributed under the terms of the Creative Commons Attribution License CC-BY 3.0., which permits unrestricted use, distribution, and reproduction in any medium, provided the original author and source are credited.

Note the brain tissue on the right side is more herniated when compared with the left side, which is also herniated (arrows).