The alar ligaments are fibrous cords that attach to the dens bilaterally and insert on the base of the skull. They function to limit axial rotation and lateral bending on the contralateral side, and flexion secondarily [1-2]. These functions are a result of the specific attachment, insertion, and orientation of the fibers of the alar ligaments and variations in these can lead to altered biomechanics. Additionally, knowledge of the anatomical variants is essential from a surgical standpoint [3].

During the routine dissection of the craniocervical junction in an adult, fresh frozen, male cadaver, an unusual ligamentous complex was found. From a posterior approach, the dura mater overlying the C2 vertebra was removed and the tectorial membrane removed. Once the cruciate ligament was identified, it was removed to visualize the posterior aspect of the dens. At this point, the alar ligamentous complex was found to be more robust than normal. With additional dissection, it became clearer that the alar ligament on the left and right sides was actually duplicated in, more or less, the coronal plane. But with the duplicated parts being slightly anterosuperior to the normally positioned ligaments. The specimen underwent computed tomography (CT) imaging (Figure 1). The duplicated parts were more or less of the same caliber of the normally positioned alar ligaments. Both the normally positioned alar ligaments and the duplicated ligaments arose from the lateral aspect of the dens, the duplicated ones slightly more anterior and superior, and these all attached along the medial edge of the occipital condyle. No transverse occipital ligament was identified. With the rotation of the craniocervical junction, both ligaments restricted rotation but not grossly, more so than would be seen with single left and right alar ligaments. No other anatomical variations or pathology of the region dissected was noted. 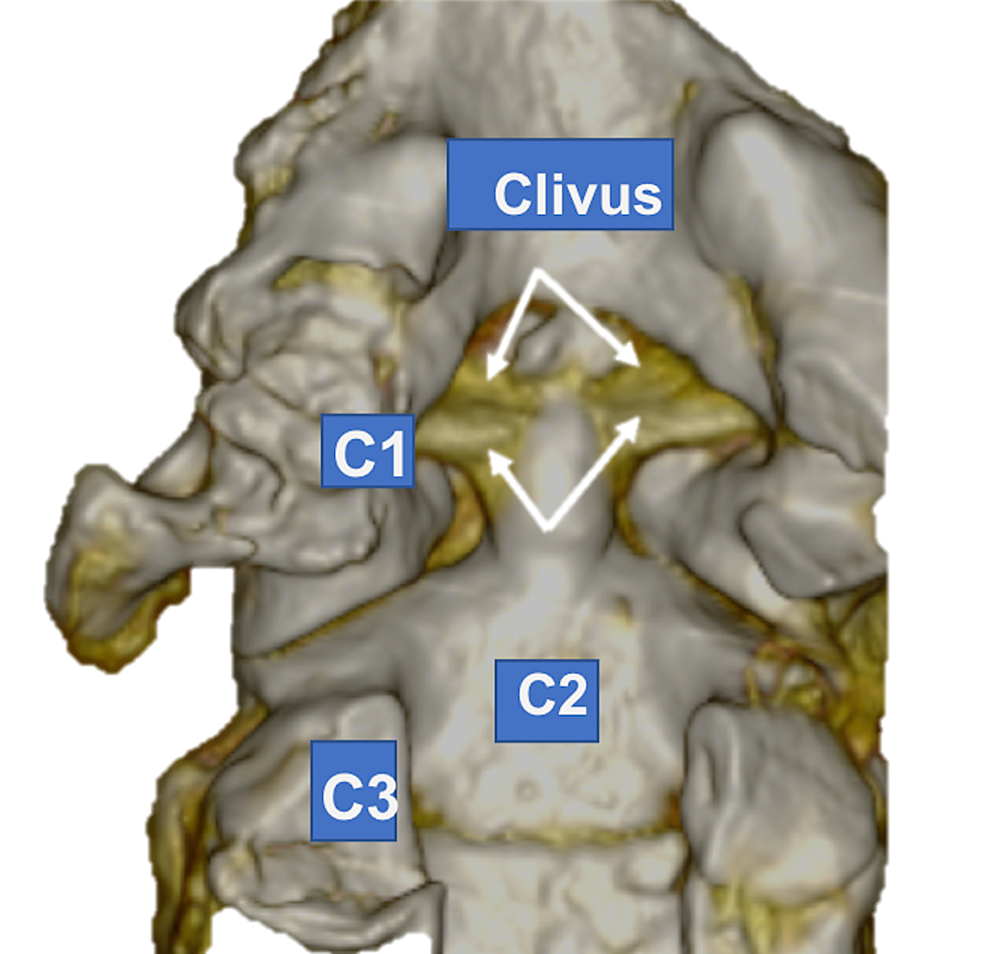 Attachment onto the dens

There are some reports of the insertion site of the alar ligament onto the medial aspect of the occipital condyle [5-6,9-11], and some on the lateral walls of the foramen magnum [4]. One author [11] reported insertions on the medial aspect of the occipital condyle in 10 out of 11 (90.9%) cadavers studied and suggested that the insertion on the foramen magnum is an anatomical variant. The literature describes the shape of the ligaments as tubular [12], elliptical, or rectangular [4]; and the cross-sectional shape as ovoid, wing-like, or round [13].

Attachment to the atlas

Attachment of the alar ligaments to the atlas has been reported as a connection between the dens and lateral mass of the atlas with fibers oriented “obliquely craniocaudally” [14]. However, other studies have not found this connection [11-13,15]. The authors of a study designed to investigate this atlantal connection note two possible explanations for this discrepancy: 1) the atlantal portion might exist in a subgroup of the population that were included in previous studies and might not usually be present in a larger sample of the population, and 2) the connections between the dens and the atlas are not part of the alar ligaments [15].

© Copyright 2018
Rizvi et al. This is an open access article distributed under the terms of the Creative Commons Attribution License CC-BY 3.0., which permits unrestricted use, distribution, and reproduction in any medium, provided the original author and source are credited.