Leg ulcers have been a common presentation in clinics; disruptions in the mechanism of ulcer healing are vascular insufficiency, anemia, metabolic disturbances, neuropathy, and autoimmunity. The term 'non-transfusion-dependent thalassemia' encompasses the milder forms of thalassemia traits that require intermittent or no transfusion at all, and are mostly associated with leg ulcers.

We present the case of a 19-year-old female with beta-thalassemia major who presented with non-healing leg ulcers and anemia. The clinical findings and lab evidence suggested hemolytic anemia evidenced by pathologic fractures, hepato-splenomegaly, and normal iron studies. Hemoglobin electrophoresis confirmed beta-thalassemia major with its complications including adrenal insufficiency and pathological fractures, all of which remained well compensated till the second decade of life.

Chronic lower limb ulceration is a frequently encountered presentation in clinical settings, with significant morbidity and psycho-social impact. affects about 1% of the adult population and 3.6% of people older than 65 years [1]. The causes of leg ulcers are multifactorial, the most common being venous insufficiency, arterial insufficiency, neuropathy, and diabetes. Indolent, non-healing ulcers are a feature of sickle cell disease, thalassemia, and other hemolytic anemias. Disruption of microvascular circulation is the underlying mechanism in such cases. Thrombotic and occlusive disease, for instance, antiphospholipid antibody syndrome, protein C and protein S deficiency, and cryoglobulinaemia also cause skin necrosis leading to ulceration and gangrene [2]. Here we present an unusual case of a young female with non-healing leg ulcers and anemia.

A 19-year-old female presented with a history of exertional shortness of breath, palpitations, dizziness for one and a half years, which had gradually worsened over a period of one month. The associated symptoms included left-sided upper abdominal heaviness, early satiety, easy bruising, joint pains, oral ulcers, and bone pains. She presented with recurrent ulcers on the legs and ankle requiring multiple antibiotics and visits to surgical clinics for the past three years. Her parents had a consanguineous marriage; in the past, she also had a spontaneous/pathological fracture of the right femur, which was treated but no medical record was available. There was no history of fever, significant blood loss, blood transfusions, lead exposure, early morning dark colored urine, loose stools, vomiting, abdominal pain, lumps and bumps, or prolonged history of drug intake.

Examination findings were as follows: pallor, hepato-splenomegaly, no lymphadenopathy. There were short systolic flow murmurs heard along the left sternal edge. In the lower limbs, the right leg showed a healed ulcer on the lateral malleolus. On the left leg, there was an approximately 10 cm elongated ulcer with undermined edges and pus at the base, along with surrounding skin excoriation and lichenification (Figure 1). 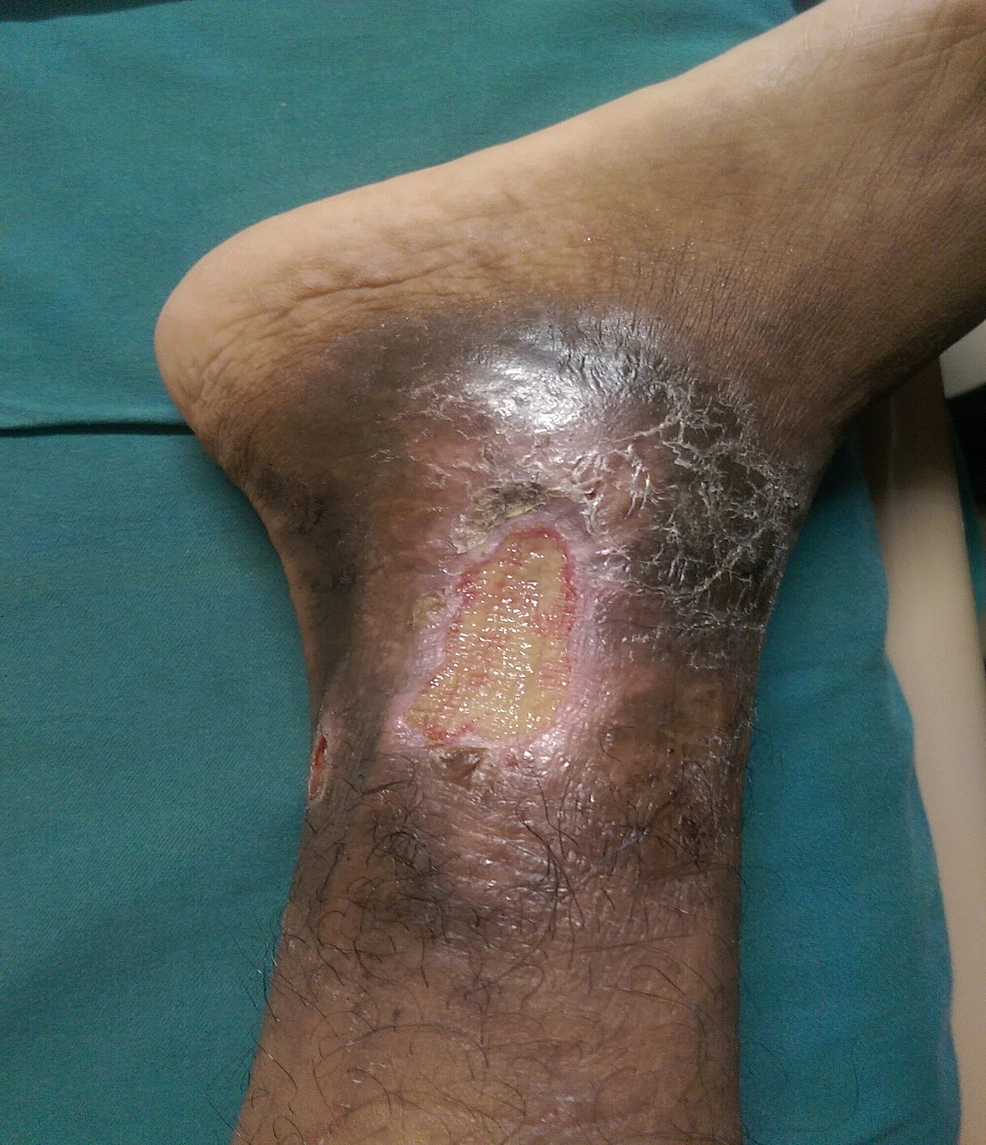 For the workup of the leg ulcer, she underwent an incisional biopsy of the leg ulcer which showed chronic granulomatous inflammation with no evidence of malignancy; periodic acid-Schiff (PAS) stain was negative for fungus. Lower gastrointestinal (GI) endoscopy was done for the possibility of inflammatory bowel disease but colonoscopy showed normal mucosa with normal haustration pattern. Doppler studies of the lower limbs showed normal arterial and venous flow. Magnetic resonance imaging (MRI) of the left leg showed multiple hyper-intense signals in the tibia, calcaneus and talus with no evidence of osteomyelitis. Furthermore, auto-immune workup and vasculitis screen was done as shown in Table 2.

She was prescribed oral steroids by the dermatology team considering the diagnosis of ANCA negative vasculitis (leucocytoclastic angiitis) which showed no improvement during her hospital admission. Hemoglobin electrophoresis was done and it supported her clinical condition to reach the final diagnosis of thalassemia major. The results are shown below (Table 3).

The patient was diagnosed as a case of beta-thalassemia major, which remained non-transfusion dependent up to the second decade of life. Radiographic findings suggestive of marrow cavity expansion were present as well. Another finding was a significant postural drop of blood pressure for which serum cortisol and adrenocorticotropic hormone (ACTH) levels were done, which were suggestive of adrenal insufficiency (Table 4).

The patient was transfused with packed red blood cells and hemoglobin was built up to 10 g/dL along with ciprofloxacin, 500 mg twice daily, for treatment of secondary wound infection. This resulted in complete wound healing (Figure 2). 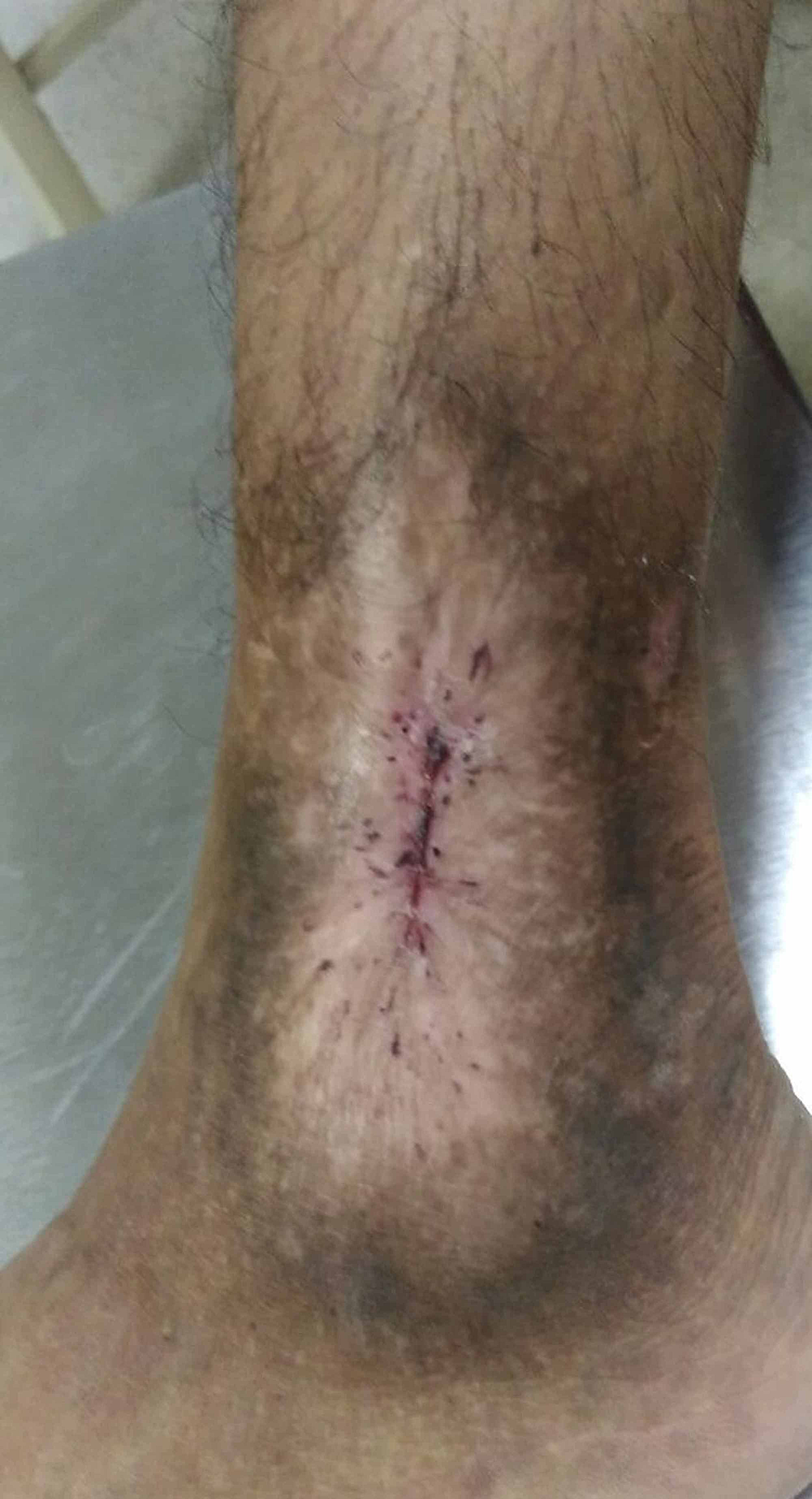 Also, daily replacement of oral steroids (prednisolone 5 mg + 2.5 mg) was given, which improved her symptoms of postural dizziness as noted on a follow-up visit. Oral iron chelation therapy, deferasirox was given to manage iron overload associated with thalssemia-related hemolysis and blood transfusions.

Inherited hemoglobin disorders have been divided on the basis of defective chain synthesis (α- and β-thalassemia) and structural variations (Hemoglobin S, C, and E). Various clinical presentations result from either simultaneous inheritance of two different mutations or their co-existence with structural variants. However, in all the cases, the result is defective red blood cell production, with peripheral hemolysis and anemia [3]. For this reason, transfusion dependence has been one of the essential factor in distinguishing the various thalassemia phenotypes and their severity. Figure 3 illustrates the different thalassemia traits according to the transfusion dependence. 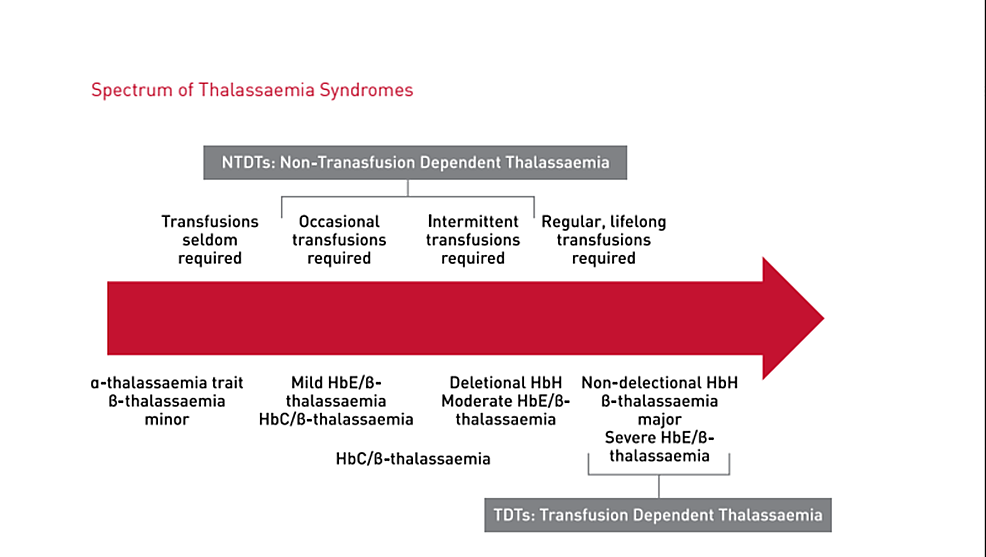 With increasing age, the complications associated with thalassemia syndromes develop. These may be related to the transfusion dependency or a part of the disease itself. These include secondary hemosiderosis, endocrine abnormalities, bone disease, pathological fractures, and hemodynamic changes. The development of pulmonary hypertension and cardiac arrhythmias can be fatal. Adequate physician education and understanding is required to preempt the complications and diagnose them earlier in the course of the disease. Figure 4 represents the commonly encountered complications of thalassemia as per their transfusion dependence [5]. 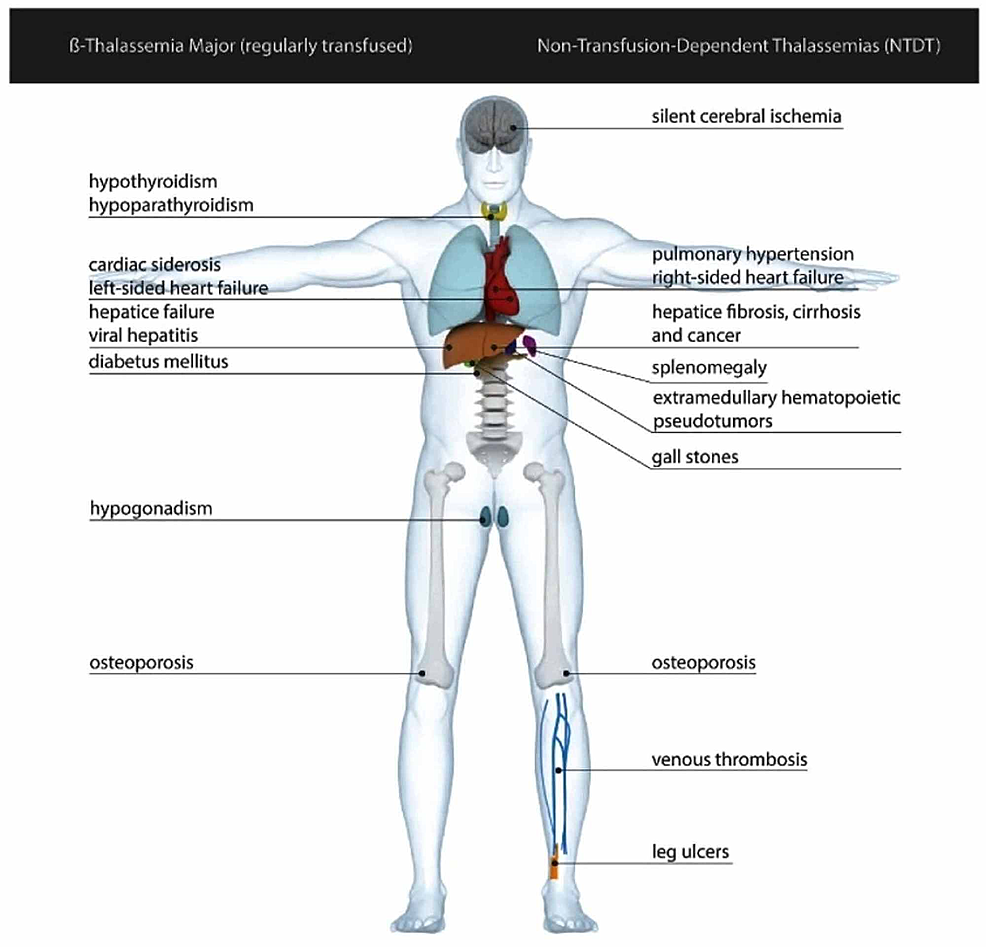 The association of leg ulcers has been observed more in patients of non-transfusion dependent thalassemia, especially in the elderly. This is because of the increased skin and vascular fragility in the elderly, due to reduced oxygen supply at the peripheries. Consequently, they have an increased risk of developing leg ulcers after minimal trauma [6]. Local iron deposition is also considered to be a contributing factor in poor healing of leg ulcers especially when heme component of the red blood cells deposits locally giving a dark hue. Thus higher rates of leg ulcers have been reported in patients with a non-transfusion-dependent spectrum of the disease having iron overload [6].

However, our patient's case was an unusual presentation of beta-thalassemia major, who remained well-compensated up till the second decade of life without any blood transfusions. Rather she presented with complications of the disease in the form of leg ulcers, adreno-cortical insufficiency and pathological fractures.

Thalassemia is a hemoglobinopathy with a spectrum of clinical presentations. Although thalassemia major presents earlier in life with resultant dependence on blood transfusion in the first few years of life, there can be a variability in the presentation, as in our patient who presented with recurrent leg ulcers and features of anemia and remained well-compensated until the adolescent age when the need for regular transfusions arise.

A Unique Case of Metformin-associated Severe Lactic Acidosis Without Preexis ...