The prevalence of Meckel’s Diverticulum (MD) in patients with Crohn’s Disease (CD) remains unclear. MD and CD can have overlapping symptoms, yet their underlying pathophysiology is different. The association between MD and CD is not very well understood, but differentiating between both disease processes can have a significant impact on lifelong therapy. We present a case of Meckel’s diverticulitis with absence of heterotopic mucosa in a patient with stricturing ileocolonic CD.

A 29-year-old male patient known to have a history of gastroesophageal reflux disease and polysubstance abuse presented to the emergency department complaining of peri-umbilical abdominal pain, diarrhea, bright red bleeding per rectum, and dizziness. The patient had been suffering from similar symptoms episodically for the past 15 years. Previous abdomen computed tomography (CT) scan without contrast at age of 23 showed cecal thickening, after which the patient was treated with ciprofloxacin and metronidazole with minimal improvement. Subsequently, the patient was admitted as a case of suspected inflammatory bowel disease (IBD).

Abdomen CT with contrast showed mesenteric lymphadenopathy with no findings of bowel thickening. Magnetic resonance enterography (MRE) showed a dilated segment of the small bowel with a possible diverticulum. The gastroenterology service was consulted with suspicion for IBD, in particular ileocolonic CD causing a stricture. Esophagogastroduodenoscopy and ileocolonoscopy were performed, which showed healthy mucosa of the colon and ileum with no endoscopic changes suggestive of IBD. Random ileal and colonic biopsies were obtained, and pathology of colonic biopsies revealed mild active chronic colitis with focal cryptitis. Ileal biopsies showed mild mucosal lymphoid hyperplasia. At discharge, adalimumab was initiated at standard dose for the possible stricturing ileocolonic CD. The patient was later readmitted with similar symptoms.

During his second admission, CRP was within normal limits. Abdomen CT scan with contrast and MRE showed small bowel wall thickening and inflammation within a bowel loop in the right lower quadrant with partial obstruction and dilation of involved loop (Figure 1). 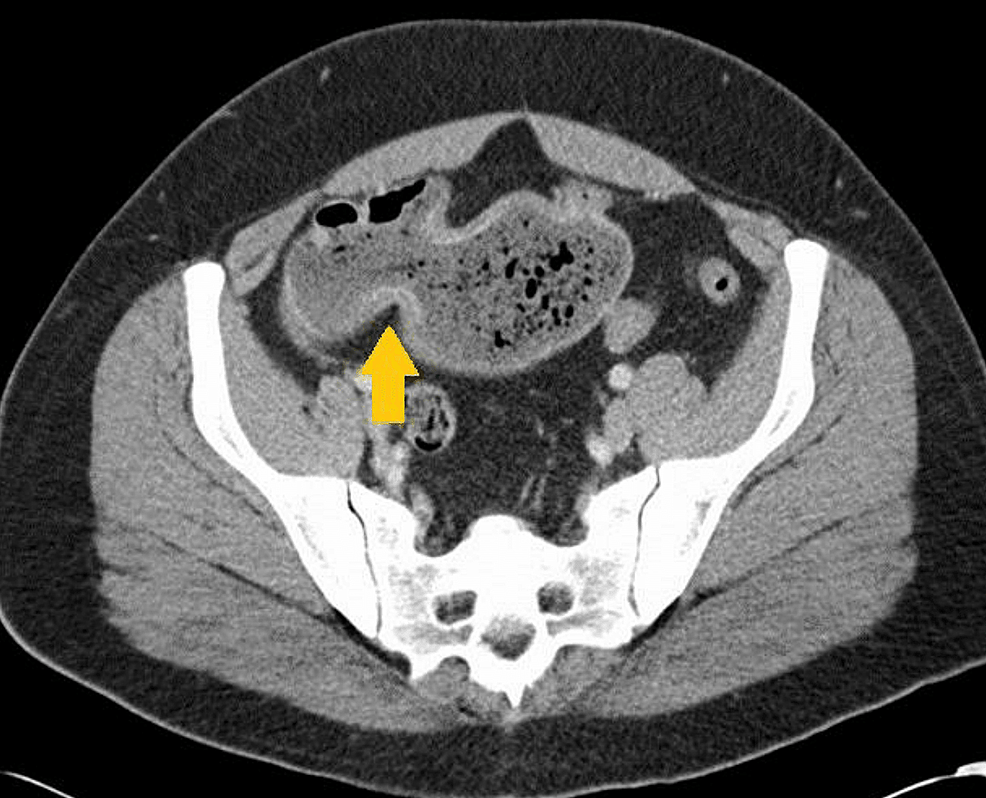 Esophagogastroduodenoscopy and ileocolonoscopy were repeated, and again, there were no endoscopic changes suggestive of active disease in the colon or terminal ileum. Biopsies showed normal ileal and colonic mucosa. The colorectal surgery service was consulted due to the possibility that these findings may be due to regional enteritis from MD rather than active CD, and resection of the affected small bowel segment was recommended. The patient underwent the surgery three months later. During laparotomy, there was a tight stricture two feet away from the ileocecal valve with outpouching of a thickened segment of bowel suggestive of MD. Pathology showed a two-inch wide diverticulum with sections of transmural inflammation and aphthous ulceration. No gastric or pancreatic mucosa were seen (Figure 2). 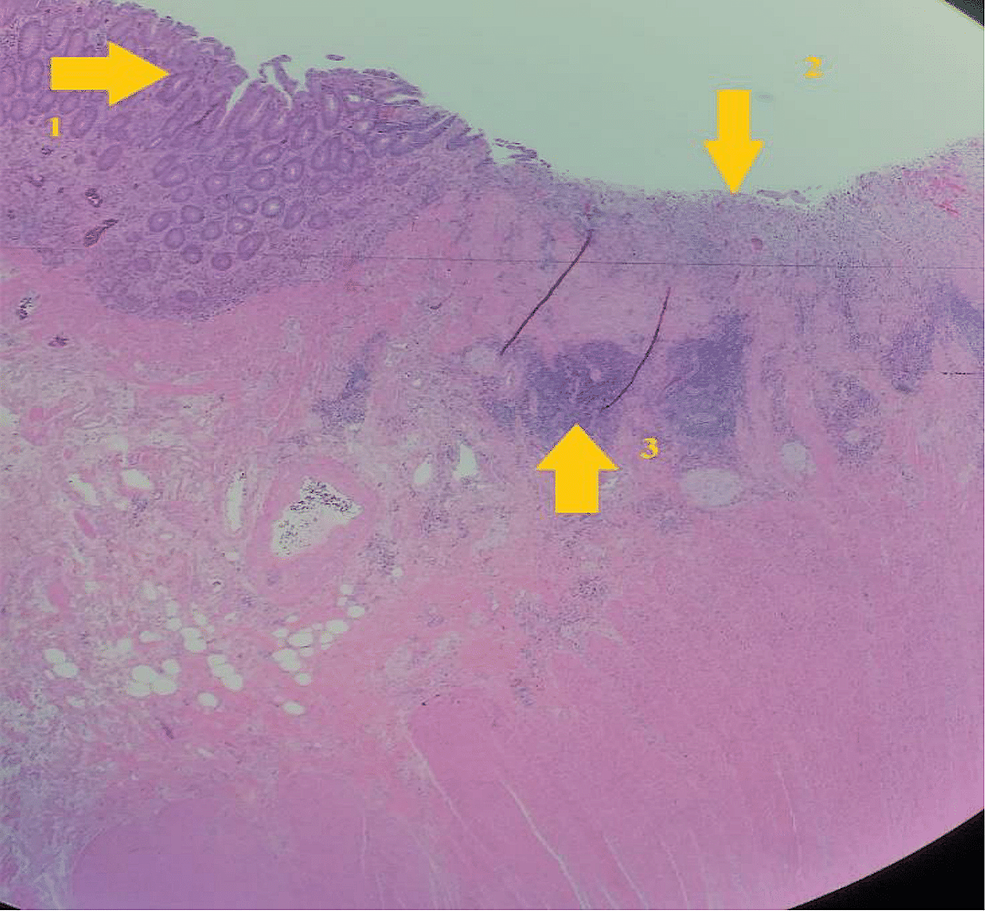 The patient was continued on adalimumab and followed up later to report resolution of symptoms. We hypothesize that our patient had underlying ileocolonic Crohn’s disease, but with symptoms related to Meckel’s diverticulitis.

MD is a congenital anomaly resulting from incomplete obliteration of the vitelline duct, which consequently leads to the formation of a true diverticulum of the small intestine. It is the most common congenital malformation of the gastrointestinal tract. The incidence of MD is estimated to be 2% of the general population [1].

As CD remains a disease of uncertain etiology, several hypotheses to explain a correlation between MD and CD have been suggested. Some have postulated that CD may be secondary to a developmental anomaly of lymphatic drainage, as congenital anomalies are often multiple. Another hypothesis is that the diverticulum serves as a reservoir for microbial organisms, increasing the probability of exposure to the organism responsible in CD. The gastrointestinal microbiota is gaining increasing recognition as a possible factor in the etiology of Crohn’s disease making this hypothesis plausible [3]. It is reasonable to question how two different diseases with two different pathogenesis, one congenital and the other multifactorial, are related. Therefore, it is also reasonable to think that these may be simultaneous but unrelated processes occurring in the same patient. Nevertheless, differentiating between both disease processes is vital as it can change the course of the patient’s management and impact lifelong therapy.

About 50% of patients with MD have heterotopic mucosa, gastric being the most common accounting for 65%. Other types of heterotrophic mucosa within MD are pancreatic and rarely colonic [2]. Chronic gastric secretions from heterotopic ectopic mucosa can rarely result in terminal ileum inflammation, mimicking terminal ileitis caused by CD, but histological changes should differentiate between them. Also, such patients generally have milder symptoms that do not warrant surgical intervention. As 50% of patients lack heterotopic gastric mucosa, pre-operative diagnosis of MD by technetium-99m pertechnetate scan remains very difficult, particularly in this patient population, since the test carries a high false positive rate in patients with IBD [1-2,5].

Both MD and CD have similar overlapping symptoms and radiographic findings, which makes it difficult to differentiate one from the other. Meckel’s diverticulum can be a mimicker of Crohn’s disease as both diseases can present with recurrent cramping abdominal pain, bright red blood per rectum, and diarrhea. In our case, the patient’s symptoms were initially attributed to CD, and therapy was initiated without improvement until undergoing small bowel resection. It is clinically challenging to understand the basis of symptoms in such a patient population as we encounter many patients with refractory CD who do not have an adequate response to medical therapy. As clinical providers, we must consider that such patients may have another active underlying disease process contributing to the clinical symptoms.

© Copyright 2018
Kassim et al. This is an open access article distributed under the terms of the Creative Commons Attribution License CC-BY 3.0., which permits unrestricted use, distribution, and reproduction in any medium, provided the original author and source are credited.