Trauma is the fourth leading cause of death globally and constitutes a huge burden on limited critical care resources.

​​​​This study aimed to identify the trauma patient burden in terms of resources used in the surgical intensive care unit (SICU) of Aga Khan University Hospital in Pakistan which also included characteristics and outcomes of trauma and non-trauma patients.

​​​We retrospectively reviewed all patient data for adult patients (>16 years old) admitted to the SICU from July through December 2014.

Trauma constitutes a significant burden in terms of resources used for the SICU of the Aga Khan University, Pakistan. Trauma victims are predominantly young men in whom gunshot injuries are as common as road traffic injuries. Emergency surgical interventions comprise the largest draw on resources, followed by use of blood products, radiological, and laboratory investigations.

Trauma is a worldwide public health problem and the fourth leading cause of death in the western world, especially in young people (i.e., those under 40 years old). Severe trauma cases, although small in number, may need urgent lifesaving interventions, damage control surgical interventions or life-sustaining organ support in an intensive care unit (ICU), consuming significant resources and causing a huge economic burden to the patient, healthcare system, and society [1].

The 48-bed state-of-the-art Emergency Department at Aga Khan University Hospital is a World Health Organization Collaborating Center for Trauma and handles around 60,000 patients annually. The surgical ICU (SICU) has a capacity of seven beds, and major trauma victims requiring close monitoring or organ support with or without surgical intervention comprise 30% of surgical admissions.

We conducted a retrospective study from July to December 2014 to determine the characteristics of patients admitted to the SICU secondary to traumatic injuries and highlighted the critical therapeutic interventions, advanced radiological procedures, and laboratory and blood products utilized during their stay. This study also looked at the type of trauma, the source of admission, length of stay, and outcomes.

The impact of trauma on our limited resources of time, critical therapeutic interventions, advanced radiological interventions, laboratory workload, and blood product utilization has not been documented in Pakistan. This study emphasizes the resources required to safely and efficiently manage critically ill trauma patients and can be used to plan future trauma management facilities and improve the care of major trauma patients in our country in a comprehensive way.

This study was conducted retrospectively in period already mentioned. After receiving the Ethical Review Committee’s exemption for approval, all patients over age 16 years admitted during the study period were included.

Patient medical records were reviewed for age, gender, diagnosis, the source of admission, length of stay, and outcome.

The above record also confirmed by the patient care inquiry (PCI) system on a remote desktop program on the intranet maintained by the Health Information Management Service. The PCI system further maintains data that includes a source of admission, types of trauma, and other resources used by patients in the SICU like surgical interventions, insertion of artificial airways, mechanical ventilation, invasive lines, renal replacement therapies (continuous renal replacement therapy), tube feeding, noninvasive ventilation, and laboratory investigations.

The specific interventions outside the SICU such as magnetic resonance imaging (MRI), computed tomography (CT) scans, and ultrasound imaging were obtained from the PCI system as well. Blood and blood product use data were produced by the Pathology department on special request based on trauma patient medical records identification numbers.

Statistical analyses were performed using SPSS for Windows, Version 16.0 (SPSS Inc., Chicago, IL). The frequency and percentage were computed for qualitative observation and analyzed by chi-square test. The mean and standard deviation (SD) were estimated for quantitative observation and analyzed by t-test. The Mann-Whitney U-test was used for data that was not normally distributed. P ≤ 0.05 was considered statistically significant.

Table 1: Comparison of outcomes between trauma and nontrauma patients (n = 141).

Figure 1 compares the incidence of the major types of trauma for admitted SICU patients. Gunshot and road traffic injuries were the most common reasons with equal incidences, followed by injuries from blasts, burns, and falls. 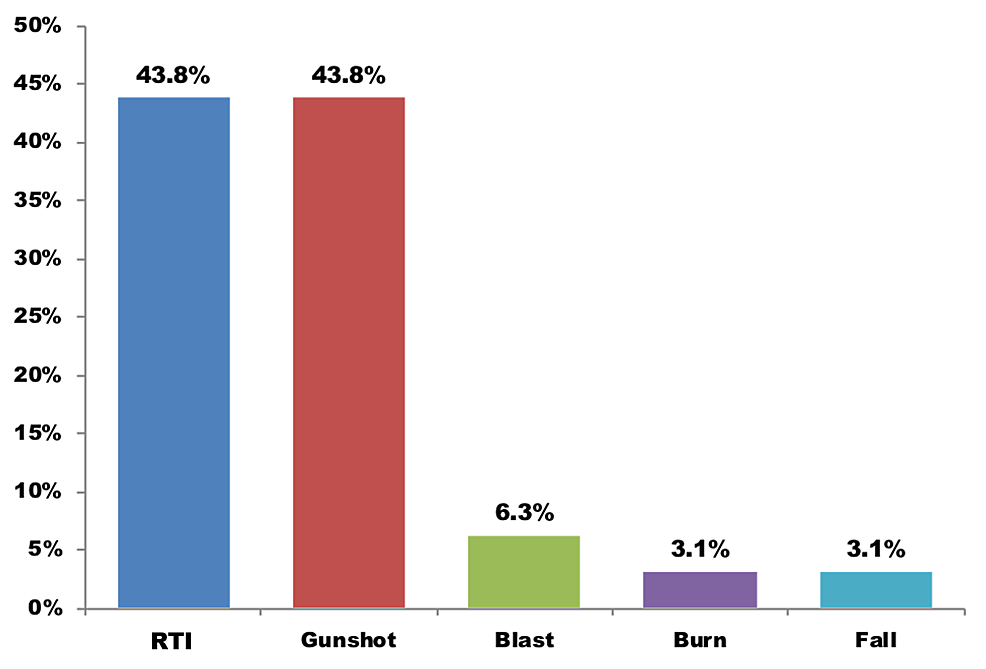 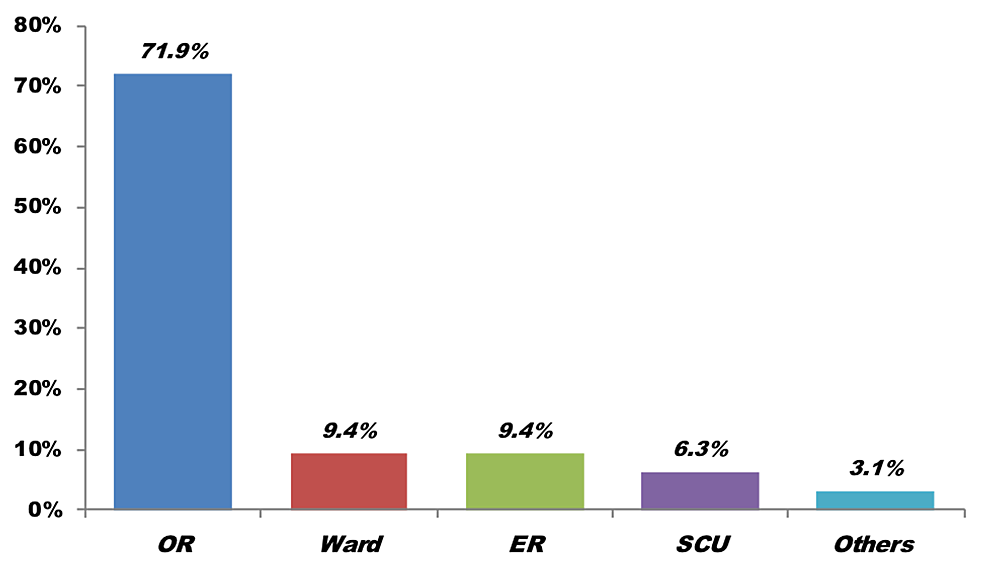 Approximately 75% of all trauma patients underwent surgical interventions, whether before or after the admission, and only 3% of those were elective. The remaining 72% had emergency surgical procedures, which is a huge proportion and a major draw on resources.

Figure 3 presents the percentage of nonsurgical therapeutic interventions for all trauma patients in the study. Mechanical ventilatory support was the most prominent (96.9%) followed by intubation (87.5%). 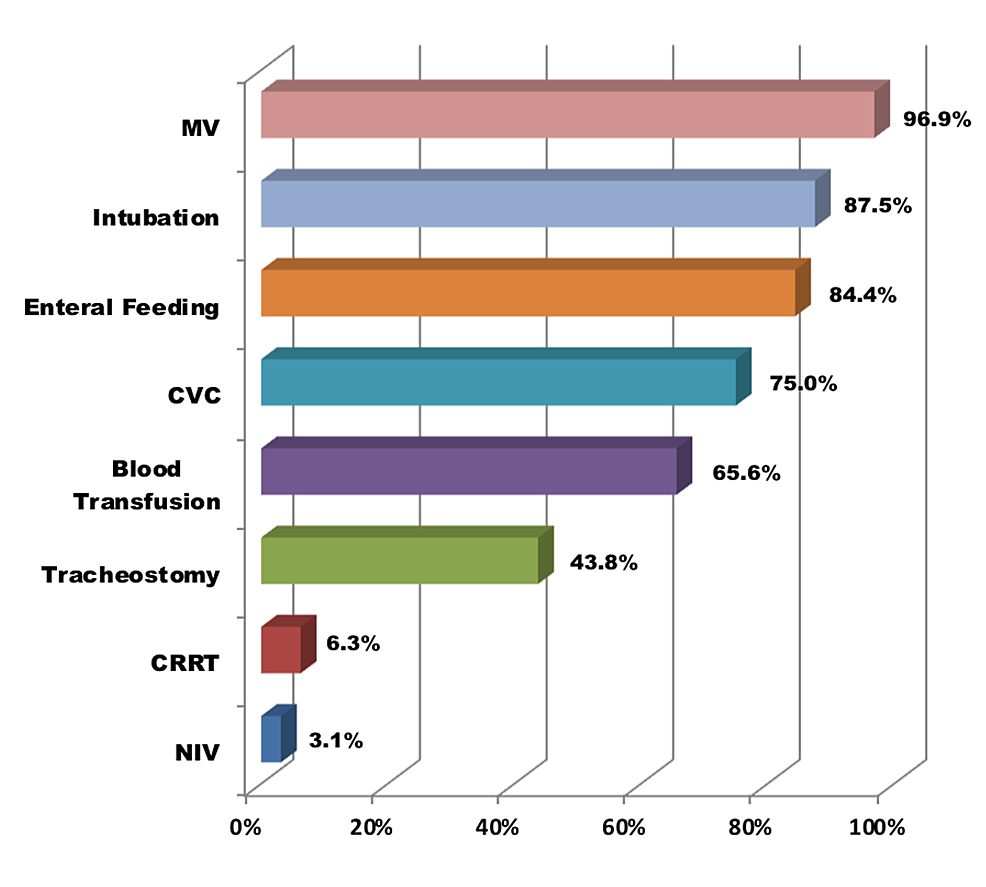 The common laboratory investigations in terms of numbers of times performed are presented in Table 4.

The ICU is the main stem of every tertiary health care center where the sickest patients are given organ support and require a high degree of resources. We studied the use of resources by trauma patients in some detail in an SICU and found road traffic injuries (14/32) and gunshot wounds (14/32) were the two most common reasons for admission (comprising 87.5% of the workload). The average mortality was 39.7% in both trauma and non-trauma patients.

Abubakar et al. performed a similar study in a combined ICU of a developing country. Most ICU admissions in their study (90.3%) were related to surgical specialties, of which trauma cases (45.6%) were most common [2]. Their reported incidence was higher than ours (22.7%), and they had a 65% survival and 35% deaths with an overall mortality rate of 35%, which was similar to our findings.

Chalya et al. reported a higher incidence of trauma cases (37.1%) compared to our study but a similar male-to-female ratio of 5.5:1 compared to our 7:1. Road traffic crash was the most common cause of injuries in their study, affecting 70.8% of patients and of those, 68.6% required surgical intervention [3]. In our study, gunshot and road traffic had the highest incidence rate (43.8% each). We found similar mortality rates between trauma (31.3%) and nontrauma patients (42.2%; P = 0.26), whereas Chalya et al. reported trauma patients had a significantly higher mortality rate than that of all ICU admissions (32.7% vs. 18.8%, respectively; P = 0.0012) [3].

PRBC use was the most prominent in our study (59%). A study from a developed country with a large study population in an acute care inpatient setting reported 4805 (5.3%) patients received at least one unit of PRBCs [5]. However, blood and blood products should be used according to hospital guidelines [6].

While our radiological data may not have presented conclusive information, radiology use is a contributing factor in the overall burden on resources, especially given only trauma patients used these resources. One major study reported the overall rate of advanced imaging utilization decreased significantly from 172 per 100 ICU admissions in 2007 to 149 per 100 ICU admissions in 2011 (p = 0.012) [7]. The authors report the change was likely attributable to a major decrease in the use of CT (Poster Session, Epidemiology/Outcomes: Jarone L, Geyer B, Kaafarani H: Trends in Advanced Imaging Utilization in Intensive Care Units at Two Major Academic Hospitals. Critical Care Medicine, 2013, 41:12. 10.1097/01.ccm.0000439811.28707.44).

Lee and Maslove reported a decline in the expected amount of novel information provided by laboratory testing [7]. The Canadian Agency of Drug and Technologies for Health conducted a rapid response report for daily blood testing in the ICU from five nonrandomized studies (NRS). Three of the five NRS showed the number of routine laboratory tests decreased significantly, resulted in less anemia and substantial cost savings without compromising patient outcomes [8].

We were unable to collect data on the cost of different variables, and our study period of six months was too brief to determine meaningful trends. Nevertheless, considering this first effort in our country, this study represents a meaningful opportunity to further explore and document new protocols and policies in our many hospitals.

Trauma patients constitute a significant burden in terms of resources used for the SICU of Aga Khan University Hospital. Most trauma victims are young men suffering from either gunshot or road traffic injuries. Emergency surgical interventions are the largest burden on hospital resources, followed by blood product use, radiological resources, and laboratory investigation resources. By understanding the major sources of burden on hospital resources, important changes to policies and guidelines can be discussed by lawmakers and health care providers. Some changes, including the availability of firearms, vehicle safety precautions, driver skills, and traffic laws require input from policymakers outside of the health care system.

Human subjects: Consent was obtained by all participants in this study. Ethical Review Committee, Aga Khan University Hospital, Karachi, Pakistan issued approval 3222-ANA-ERC-14. PI, Muhammad Rizwan. This study was approved exemption from ethical approval on 22nd Sep, 2014, with slight different title which I changed on mutual understanding of my co-author and supervisor of fellowship Dr. Madiha Hashmi.
A copy of exemption approval can be produced on demand. Animal subjects: All authors have confirmed that this study did not involve animal subjects or tissue. Conflicts of interest: In compliance with the ICMJE uniform disclosure form, all authors declare the following: Payment/services info: All authors have declared that no financial support was received from any organization for the submitted work. Financial relationships: All authors have declared that they have no financial relationships at present or within the previous three years with any organizations that might have an interest in the submitted work. Other relationships: All authors have declared that there are no other relationships or activities that could appear to have influenced the submitted work.

© Copyright 2018
Rizwan et al. This is an open access article distributed under the terms of the Creative Commons Attribution License CC-BY 3.0., which permits unrestricted use, distribution, and reproduction in any medium, provided the original author and source are credited.

Table 1: Comparison of outcomes between trauma and nontrauma patients (n = 141).