Spontaneous coronary artery dissection (SCAD) is one of the rarest causes of acute coronary syndromes, which include myocardial infarction (MI), stable and unstable angina, cardiogenic shock, and sudden death. The course of the disease, its etiology, prevalence, prognosis, and treatment remain ill-defined. Adding to the complexity is the fact that patients may lack typical risk factors for coronary heart disease. Herein, we report a case of a 42-year-old woman with vitamin B12 deficiency, who presented with chest pain; electrocardiography (ECG) findings were consistent with the acute anterior wall MI. Cardiac catheterization was done, which showed a very large left anterior descending (LAD) artery dissection.

Spontaneous coronary artery dissection (SCAD) is an extremely rare cause of acute coronary syndromes, which include myocardial infarction (MI), stable and unstable angina, cardiogenic shock, and sudden death [1]. Diagnosis can be made through clinical picture, cardiac catheterization and more frequently by autopsy [2]. The pathogenesis and treatment remain unclear. The patients may lack typical risk factors for coronary heart disease as well. Up to a third of all reported cases have occurred during the third trimester of pregnancy or early in the postpartum period. The mechanism is not completely understood but the hemodynamic changes in pregnancy and hormone-mediated alterations are said to be related to SCAD during pregnancy. Pregnancy-induced changes in arterial walls such as fragmentation of reticulin fibers may also result in dissection [3].

A 42-year-old nonpregnant, housewife with no known comorbidities, presented to the emergency room (ER) with chest pain for 15 minutes where electrocardiography (ECG) was done and it showed acute onset anterior wall ST-segment elevation MI. She was kept in coronary care unit (CCU) under observation for two days; no thrombolysis was done because the patient had a history of bleeding peptic ulcer and, therefore, was started on aspirin, clopidogrel, and simvastatin where her ST-segment elevation settled but again started to rise. Hence, angiography was done that showed dissection in left anterior descending (LAD) artery (Figure 1). 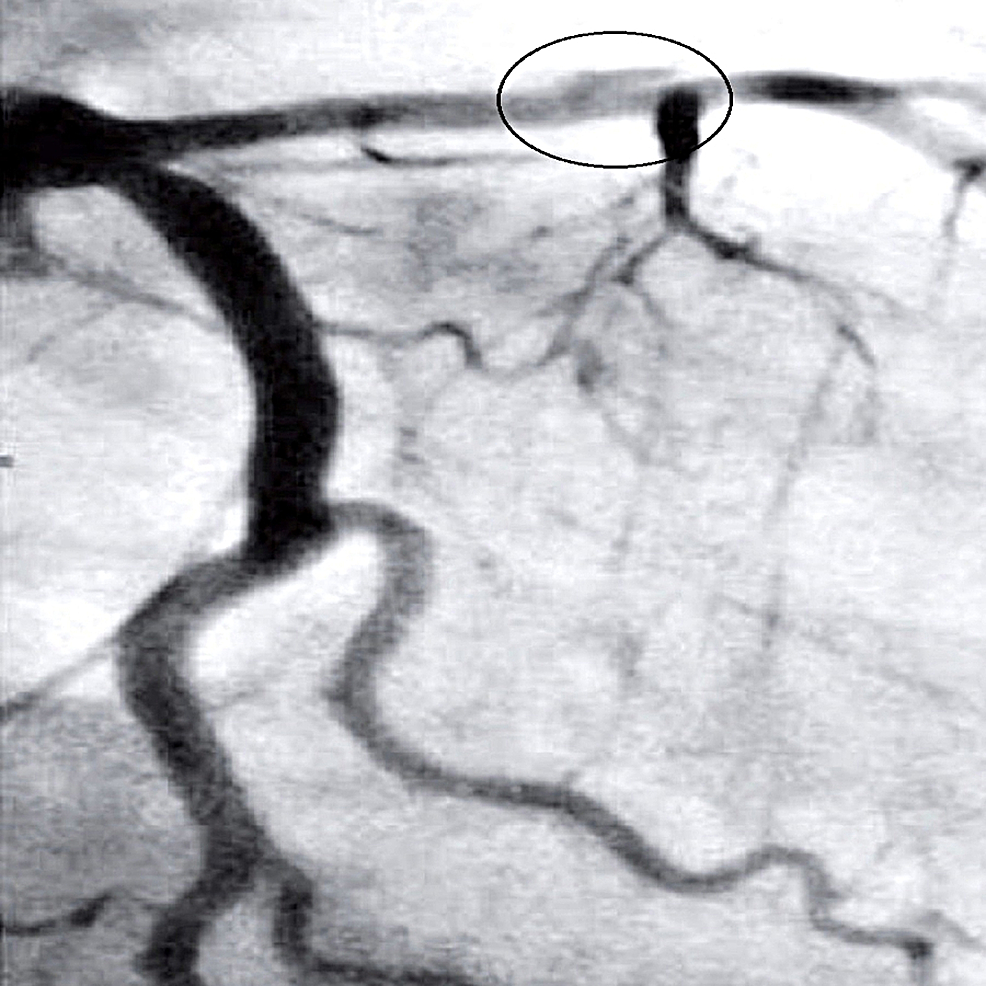 The patient had no family history of sudden cardiac death, coronary heart disease, or coronary artery dissection; past medical, surgical, and psychosocial histories were unremarkable. Physical examination was unremarkable. Chest radiography was normal. Cardiac enzymes were normal. The echocardiogram was normal. Due to recurrent chest pain, emergent off-pump CABG was performed, and the left internal mammary artery was anastomosed to the LAD distally. She had an uneventful recovery and during 18 months follow-up period, the patient was free of chest pain and her ECG became normal.

Spontaneous coronary artery dissection has been reported with multiple factors including the peripartum period [4-5], postpartum period [6-7], oral contraceptives use [8], and connective tissue disorders including Ehlers-Danlos syndrome [9], systemic lupus erythematosus [10], neurofibromatosis [11], sexual intercourse [12], and bleomycin-etoposide-cisplatin therapy for testicular cancer [13]. It occurs most commonly in females and the LAD is the vessel affected most often [14]. There have been no previous case reports describing any link between SCAD and vitamin B12 deficiency, which would have been treated successfully with off-pump CABG. Elevated homocysteine level due to vitamin B12 deficiency has been linked with spontaneous cervical artery dissection [15], so we can think that there may be a linkage between SCAD and vitamin B12 deficiency because apart from that the patient did not have any other cardiac risk factors. The optimum management of SCAD is not well defined. Possible treatment options include medical therapy (aspirin, heparin, beta blockers, statins, and nitrates) or invasive therapies like CABG, angioplasty and stenting and even cardiac transplantation [16]. Thrombolysis is a therapeutic option [17], but there are cases reported in the literature where thrombolysis resulted in further increase of the dissection [18]. Bypass surgery has been used in numerous cases especially for LAD dissection or when the initial therapies were unsatisfactory [19]. Surgical therapy was pursued after considering the following factors: length of the dissection and presence of symptoms at the time of angiography. In retrospect, it appears to have been a good decision as the patient made a fully uneventful recovery without any complications at all. For perfectly healthy young patients presenting with LAD dissection and having any contraindication for thrombolysis like a history of bleeding peptic ulcer in our case, CABG can be employed for treatment. However, coronary artery stenting could be a good option for SCAD especially in monotruncular lesion [20]. Prognosis of the SCAD is better if the patient is able to go through the initial event. Hence, we conclude that early intervention with CABG in healthy patients presenting with LAD dissection leads to the desired outcome and less need for further interventions.

This case is rare in that SCAD occurred in a young woman who was nonpregnant and without any risk factors associated with SCAD, who had low vitamin B12 levels (140 pg/dl) which causes increased homocysteine levels that is further linked with spontaneous carotid artery dissection. In a patient like this where there were no cardiac risk factors, elevated homocysteine due to B12 deficiency can be linked to SCAD. But as there are no cases reported like this, more research and population studies are required to further know about it. Family history, psychosocial history, past medical history, past surgical history, and physical examination were unremarkable; cardiac enzymes, radiography, and echocardiogram were perfectly normal. We propose that vitamin B12 deficiency could be associated with an increased risk for SCAD in young healthy women without any comorbids.

© Copyright 2018
Masood et al. This is an open access article distributed under the terms of the Creative Commons Attribution License CC-BY 3.0., which permits unrestricted use, distribution, and reproduction in any medium, provided the original author and source are credited.