Aim: The aim of the study is to compare the remineralization potential of monofluorophosphate, casein phosphopeptide-amorphous calcium phosphate (CPP-ACP), and calcium sodium phosphosilicate on demineralized enamel lesions.

Materials and methods: Enamel sections from 30 sound human premolar crowns were prepared and sectioned into quadrants. Early enamel lesions were created in each sample by immersion in a demineralizing solution for 72 hours. Of the four sections, the first quadrant (A) was not given any surface treatment, the second quadrant (B) was treated with monofluorophosphate dentifrice, the third (C) was treated with casein phosphopeptide-amorphous calcium phosphate (CPP-ACP), and the fourth (D) was treated with calcium sodium phosphosilicate while being subjected to a five-day pH cycling protocol. The sections were further cross-sectioned to expose the lesion depth and were then viewed under the confocal laser scanning microscope after staining with 0.1 mM rhodamine B dye for 24 hours. The two parameters evaluated were the cross-sectional demineralized lesion area and total fluorescence.

Though fluoride is the cornerstone of non-invasive caries management, its use predominantly leads to surface-only mineralization [2]. Surface-only remineralization does little to improve the aesthetics and structural properties of deeper lesions. Ideally, a remineralization system should supply stabilized bioavailable calcium, phosphate, and fluoride ions that favor subsurface mineral gain rather than deposition only in the surface layer.

Calcium sodium phosphosilicate has been developed under the brand name Novamin (GlaxoSmithKline, Brentford, United Kingdom) and seems to be a promising alternative to promote the remineralization of early enamel lesions [4].

This in vitro study was, hence, carried out to compare the remineralization potential of monofluorophosphate, casein phosphopeptide-amorphous calcium phosphate, and calcium sodium phosphosilicate.

Collection and storage of teeth

Thirty maxillary first and second premolars extracted for orthodontic treatment with intact surfaces and no evidence of caries, hypoplasia, or restorations were used for the preparation of the specimens. All the teeth were stored in 0.1% thymol (w/v) solution until sterilization. They were cleaned of surface debris and were sterilized by autoclaving at 15 psi pressure at 121°C for 40 minutes [5].

Each tooth was sectioned into quadrants along both mesiodistal and buccolingual planes and subjected to mechanical polishing with successive 120, 400, 600, and 1200 grit paper to expose the virgin enamel in the deeper layers [6] (Figure 1). 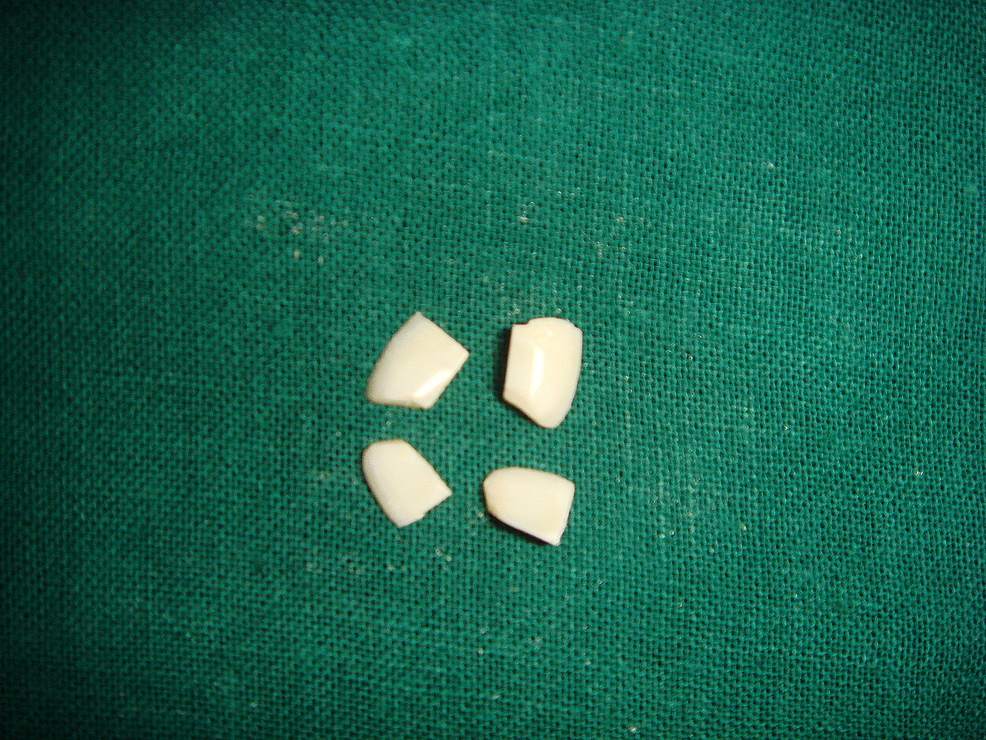 Sections were mounted individually in self-cure acrylic resin with the enamel surface facing the top (Figure 2). 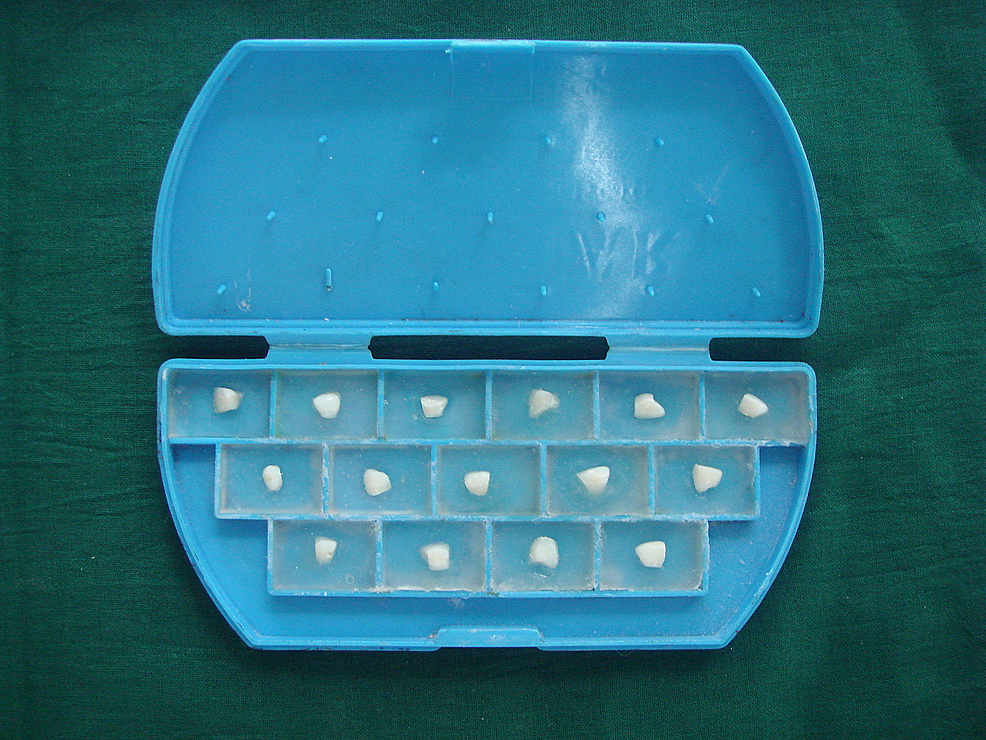 Figure 2: Mounting of the sections in self-cure acrylic resin

A 3 mm x 3 mm treatment window was then opened on each tooth section by applying acid-resistant nail varnish (Revlon, New York, USA) [7] on all other areas of the acrylic block except for the area designated as the treatment window. They were then labeled according to the treatment protocol (Figure 3). 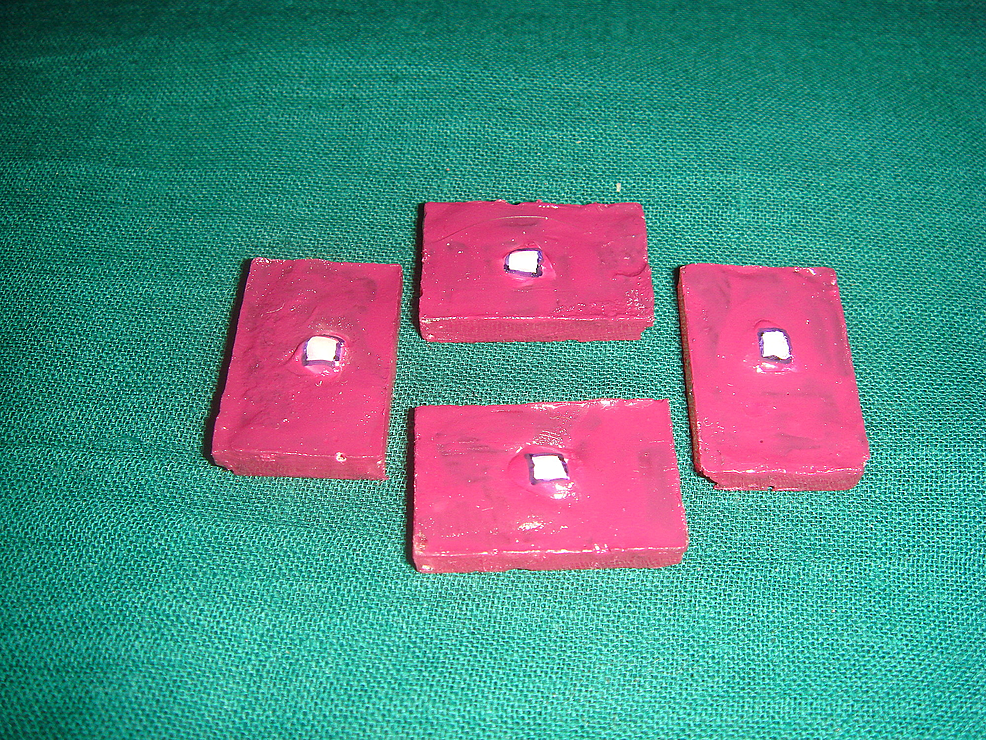 Figure 3: Sample after the application of nail varnish 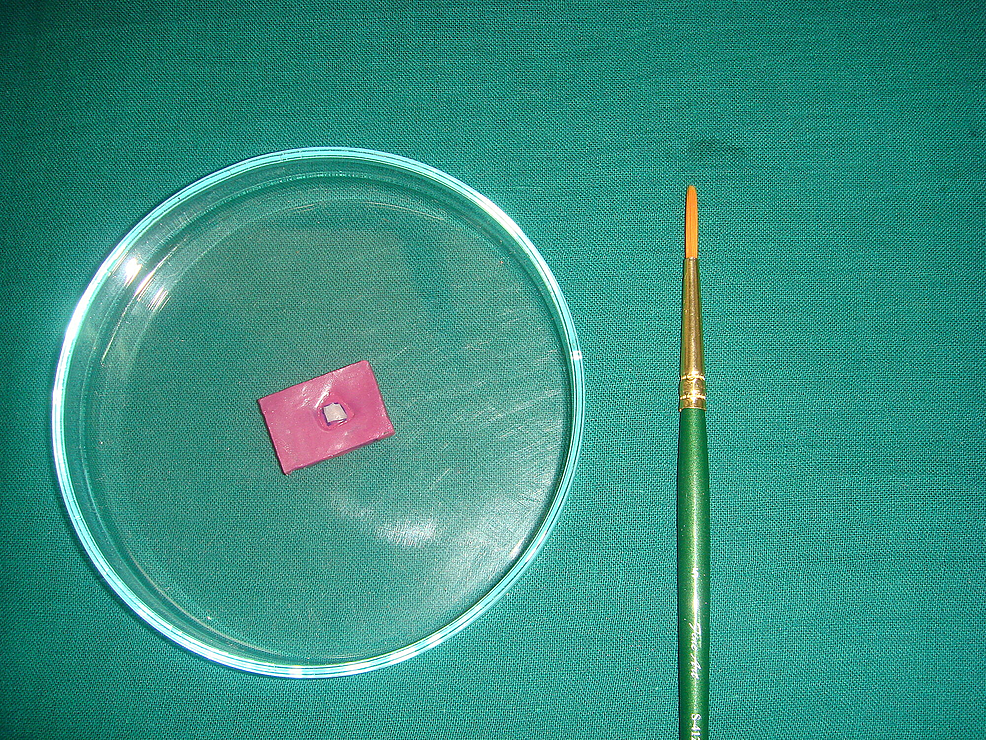 Figure 4: Group A: no treatment

The second quadrant was treated with monofluorophosphate dentifrice and designated as group B (Figure 5). 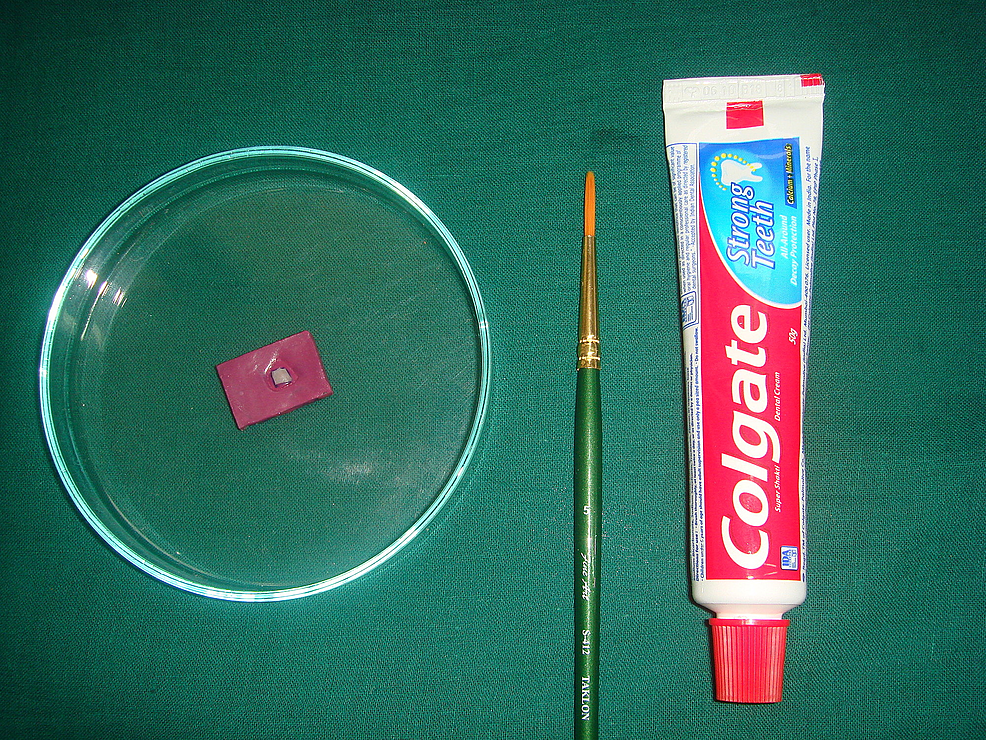 The third quadrant was treated with CPP-ACP and was designated as group C (Figure 6). 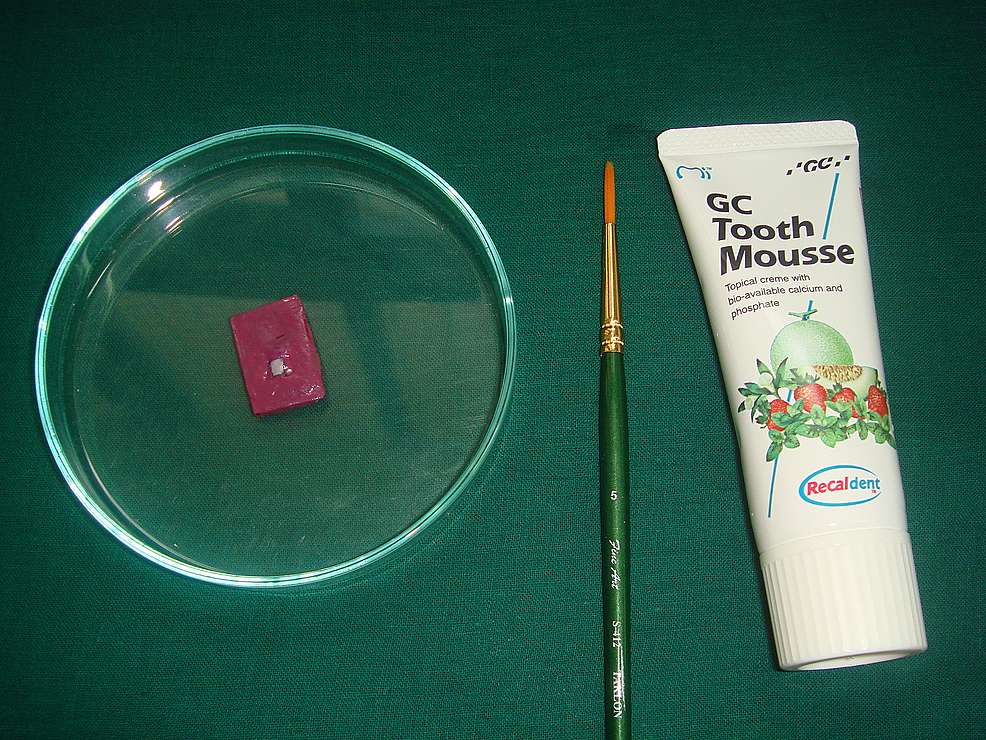 The fourth quadrant was treated with calcium sodium phosphosilicate and was designated as group D (Figure 7). 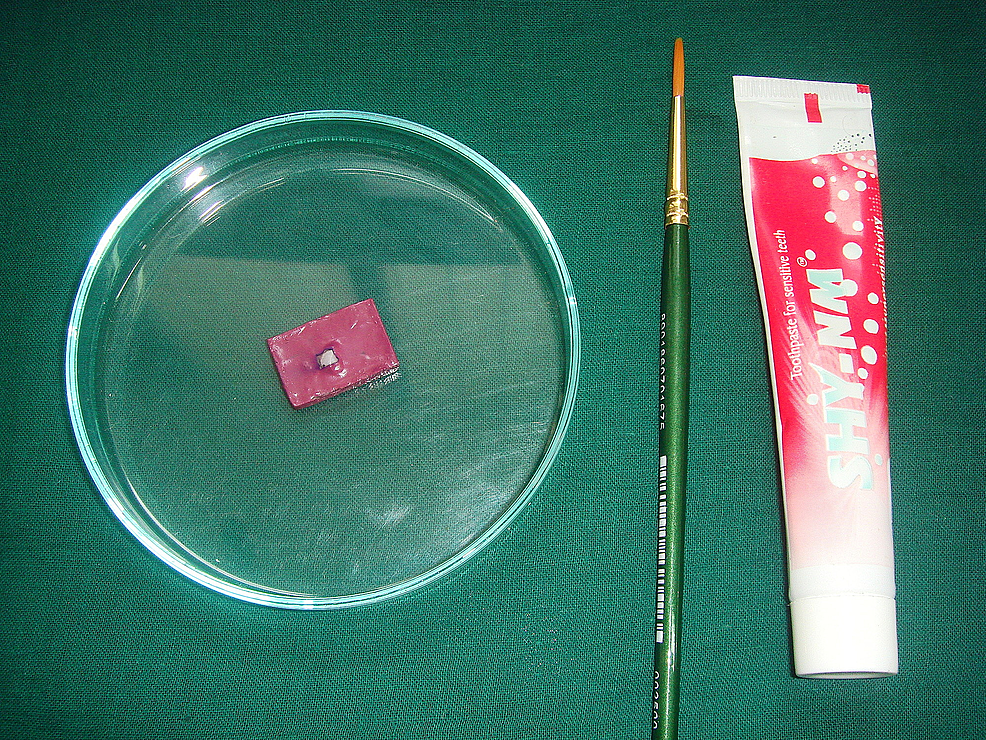 The following protocol was followed [10]:

1)  Applying the test materials on the specimens

2)  Placing the specimens in the demineralizing solution for three hours

3)  Washing the specimens in distilled water

4)  Applying the test materials on the specimen

5)  Washing the specimens in distilled water

6)  Placing the specimens in synthetic saliva for 20 hours

The specimens were sectioned across the treatment window to expose the lesion depth (Figure 8). 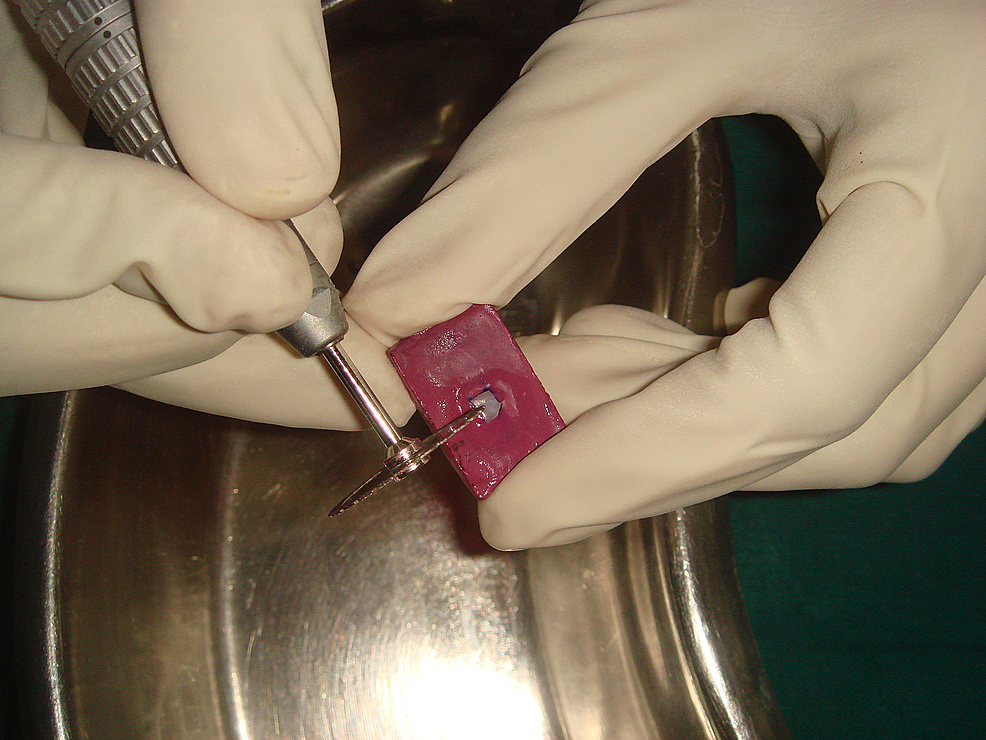 Figure 8: Cross-sectioning through the midline

Each section was stained by immersion in 0.1 mM rhodamine solution for 24 hours [8].

The sections were subjected to a cross-sectional confocal laser microscopic analysis at the Department of Experimental Pathology, Sri Chitra Thirunal Institute of Medical Sciences. A Carl Zeiss Axiovert 200M inverted microscope (Göttingen, Germany) with a confocal attachment was used for this study (Figure 9). 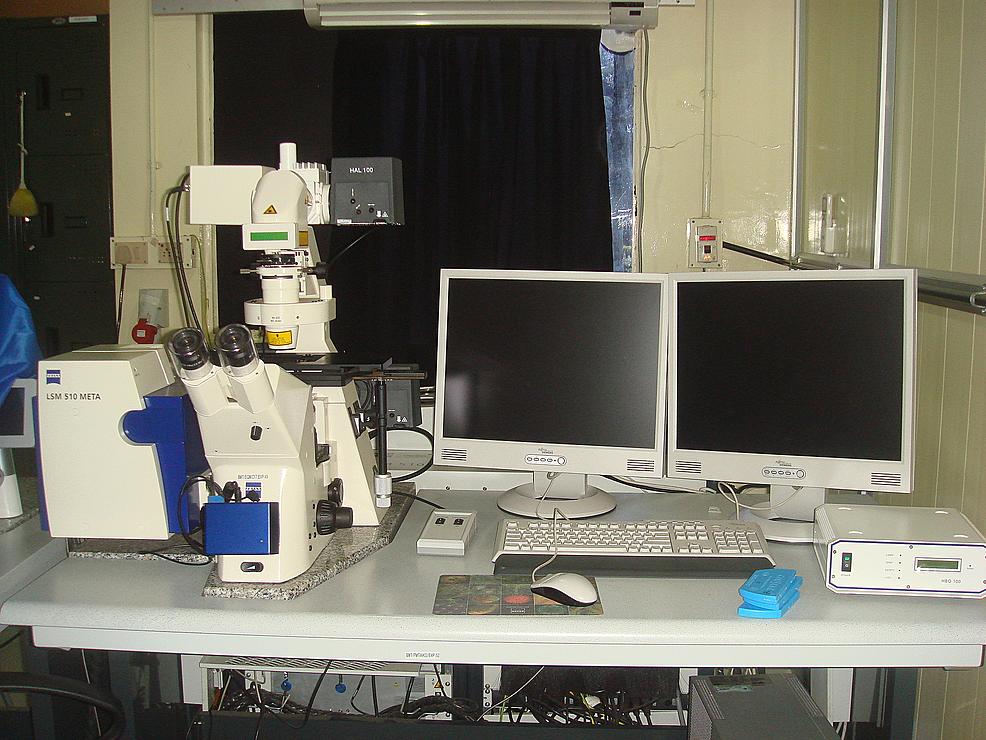 This microscope used Carl Zeiss LSM 510 version 4 software (Göttingen, Germany) in order to visualize the images captured by the microscope on a computer screen. The cross-sectional analysis was based on digital images taken at controlled microscope settings. The area stained by the rhodamine dye appears red and is indicative of a demineralized area. Sound tooth and acrylic resin appear black, as they do not absorb any dye. Representative images are shown (Figure 10). 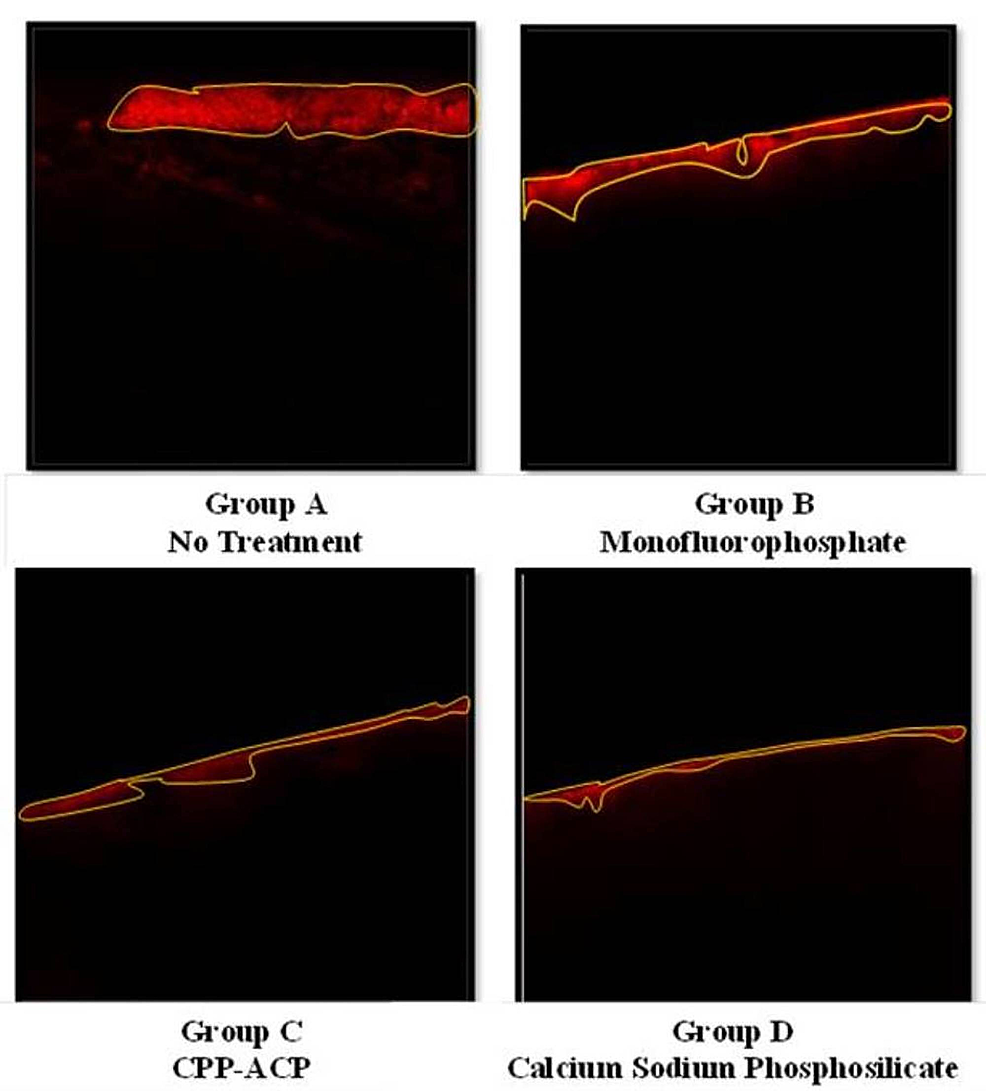 Image analysis was done using the imageJ software (National Institutes of Health, Maryland, US) and the following parameters were analyzed.

Table 1: Comparison of cross-sectional demineralized lesion area based on group

Scheffe multiple comparisons proved that the variations in each group were also significant. As the lowest values were recorded by the calcium sodium phosphosilicate group, it emerged as the most effective remineralizing agent in this study. It was followed by CPP-ACP. Monofluorophosphate was proved as the least effective remineralizing agent as the values recorded for lesion area and total fluorescence were the highest for this group.

Fluoride is the most commonly used remineralizing agent. By acting on the dynamics of the caries process, fluoride is very effective in slowing down the progress of carious lesions. It not only inhibits demineralization but also aids in the remineralization of the enamel surface, leading to the formation of fluorohydroxyapatite or fluorapatite.

In aqueous environments, Na+ particles in calcium sodium phosphosilicate immediately (within one minute) begin to exchange with hydrogen cations (H+ or H3O+) [13-15]. This rapid exchange of ions allows calcium (Ca2+) and phosphate (PO43–) species to be released from the particle structure. A modest, localized, transient increase in pH occurs that facilitates the precipitation of calcium and phosphate from the particles and from saliva to form a calcium phosphate (Ca-P) layer on tooth surfaces. As the reactions and the deposition of Ca-P complexes continue, this layer crystallizes into hydroxycarbonate apatite, which is chemically and structurally similar to biological apatite [13]. The results obtained showed that samples treated with calcium sodium phosphosilicate recorded the least values for the demineralized cross-sectional lesion area and total fluorescence. This suggests that very few demineralized areas were present in these samples. As the dye stains only demineralized areas, the area occupied by the dye was the least in these specimens, consequently, giving rise to the lowest values for the parameters measured. The values recorded for cross-sectional demineralized lesion area and total fluorescence were highest for the no treatment group, as they were not subjected to any surface treatment. This reinforces the fact that some form of dentifrice usage is a must for remineralization to occur and saliva alone is not adequate. The values recorded by the CPP-ACP group were higher than the calcium sodium phosphosilicate group, suggesting that the remineralization produced by the latter was more effective. Monofluorophosphate lead to minimal remineralization in this study.

This study was an in vitro study. In vitro models are mechanistically limited in three key ways: an inadequate simulation of the biological aspects of caries, a difficulty in matching solid/solution ratios occurring in vivo, and artifacts associated with substrate choice/reaction conditions

To obtain meaningful data, in vitro analysis requires the investigator to eliminate as much experimental variability as possible. The relative success of this study should be credited to meticulous standardization in each procedural step. Sample preparations, solutions, and processes were all subject to strict uniformity control for all tooth sections. This leaves only inherent specimen variability unaccounted.

Therefore, within the limits of the study, the results of using calcium sodium phosphosilicate as a remineralizing agent seem promising. Further clinical trials are, however, necessary to make public recommendations.

The results of this study suggest that among the three agents tested, calcium sodium phosphosilicate is the most effective remineralizing agent followed by casein phosphopeptide-amorphous calcium phosphate. Though monofluorophosphate is effective as a remineralizing agent, its effectiveness is not as good as the other two agents when tested under the conditions mentioned in this study.

Figure 2: Mounting of the sections in self-cure acrylic resin

Figure 3: Sample after the application of nail varnish

Figure 4: Group A: no treatment

Figure 8: Cross-sectioning through the midline

Table 1: Comparison of cross-sectional demineralized lesion area based on group

Initial Evaluation by a Non-Surgeon Provider Does Not Delay the Surgical Car ...