Eyebrows serve an important role in communication and cosmetic appearance. Eyebrow hypotrichosis is characterized by the lack of growth or loss of eyebrow hair [1]. This condition can be idiopathic or related to an underlying disorder [1]. Bimatoprost 0.03% ophthalmic solution is a prostamide F2α analog approved for the treatment of glaucoma and ocular hypertension that has also demonstrated efficacy in hair growth [2-9]. We describe a 60-year-old woman with eyebrow hypotrichosis who achieved excellent and sustained growth of her eyebrows with continual daily application of bimatoprost 0.03% solution.

Examination of the eyebrows revealed sparse and thin black hairs (Figure 1). Examination of her scalp and face did not reveal alopecia elsewhere; specifically, neither frontal hairline recession nor temporal cobble stoning were noted. Similarly, she had no additional areas of hair loss on her body. 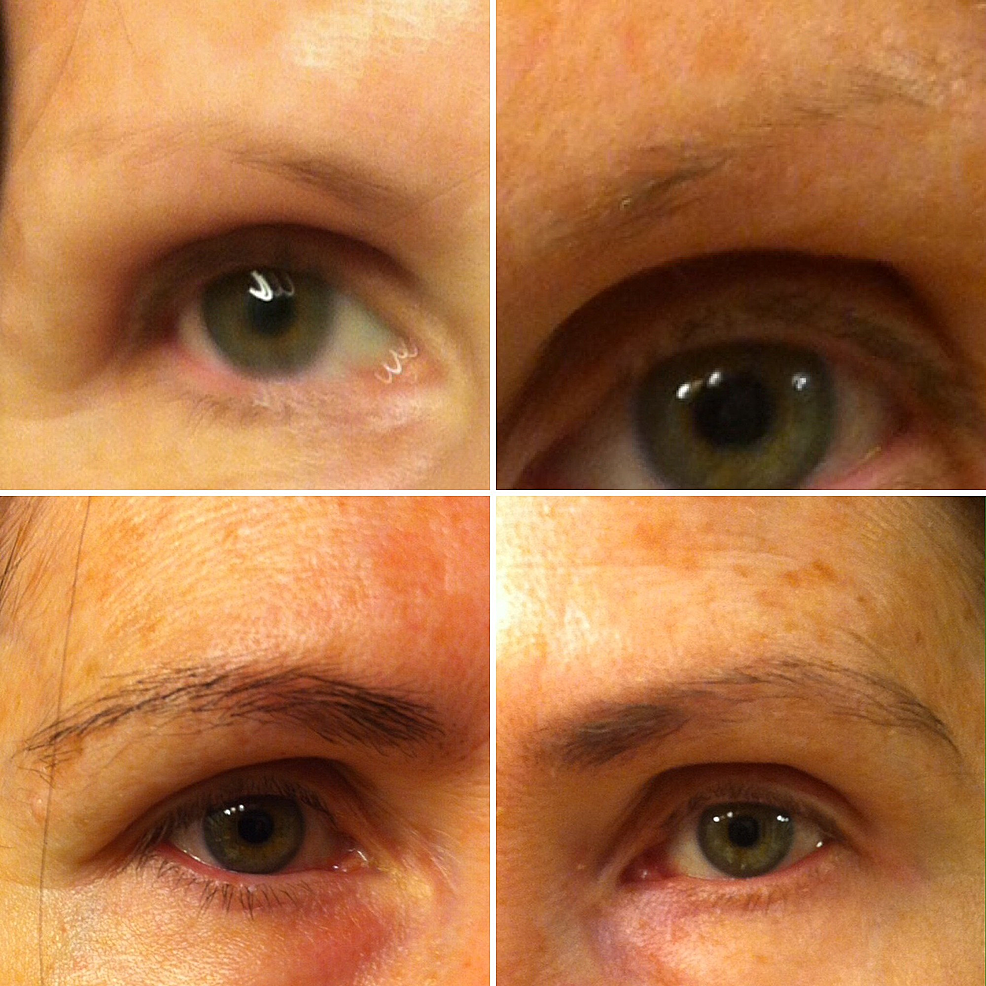 The eyebrows frame the upper margin of the orbit and are an essential feature of the facial landscape. They serve not only a role in protecting the eyes, but also as a means of as non-verbal communication. Eyebrow loss can have cosmetic, functional, and social consequences [2]. Loss of eyebrow hair can be idiopathic or age-related. However, eyebrow hypotrichosis can be due to a local or systemic condition (Table 1) [1,2].

Eyebrow hypotrichosis can be a cosmetic concern and impact the affected individual’s self-esteem [2]. Several treatments to benefit patients with eyebrow hypotrichosis have been explored. Available options include bimatoprost, hair transplantation, and minoxidil [Table 2] [2-12].

Bimatoprost was approved by the Food and Drug Administration for the treatment of eyelash hypotrichosis in 2008 [9]. The medication is a prostamide F2α analogue; it demonstrated the side effect of eyelash growth when utilized in the treatment of glaucoma and ocular hypertension [2]. Ophthalmic use of bimatoprost also demonstrated side effects such as periorbital hyperpigmentation and iris pigmentation [2,13]. Darkening, as well as increased length and thickness of hair, is noted with continual use of bimatoprost 0.03% solution [13]. However, bimatoprost 0.03% solution does not increase the number of eyelash follicles [13].

The mechanism of action of bimatoprost 0.03% solution in the treatment of eyebrow hypotrichosis has been evaluated [6,13,14]. Bimatoprost exerts its effects by stimulating the prostamide receptor, leading to downstream effects resulting in the transition of hair follicles from the telogen phase to the anagen phase [6,13]. Bimatoprost treatment has also been associated with prolonging the duration of the anagen phase, leading to longer hair [13]. Investigators have postulated that the clinical improvement in eyelash fullness and thickness that has been observed is due to enlargement of the dermal papillae and an increase in hair bulb diameter [13]. In addition, researchers have attributed the mechanism of hair darkening noted with bimatoprost use to result from increased melanogenesis via stimulation of the enzyme tyrosinase [13,14].

Prompted by the excellent response of eyelash growth with use of bimatoprost 0.03% solution, a small number of investigators have utilized bimatoprost to treat eyebrow hypotrichosis (Table 3) [3-7,9]. The studies included both women and men. Including our patient, a total of 421 patients have been evaluated.

Table 3: Characteristics of patients with eyebrow hypotrichosis who were treated with bimatoprost 0.03% solution

Bimatoprost was either applied once daily—like our patient—or twice daily to the eyebrows. Improvement was noted as early as eight weeks; however, maximum improvement was observed to occur between six to eight months [3,9]. Similar to our patient, hair growth was progressive and continued to increase as the patient maintained the topical treatment.

No significant adverse events were recorded. However, one group of investigators observed contact dermatitis in three of 27 patients (11.11%) [6]. Skin hyperpigmentation was also reported in one patient [5]. Pruritus was reported by other researchers in three of 118 patients (2.5%) applying bimatoprost daily and one of 118 patients (0.8%) treating twice a day; however, pruritus was also reported in one of 121 patients (0.8%) who were being treated with the vehicle [9].

© Copyright 2018
Riahi et al. This is an open access article distributed under the terms of the Creative Commons Attribution License CC-BY 3.0., which permits unrestricted use, distribution, and reproduction in any medium, provided the original author and source are credited.

Table 3: Characteristics of patients with eyebrow hypotrichosis who were treated with bimatoprost 0.03% solution