To evaluate inpatient outcomes and the prevalence of psychiatric and medical comorbidities in bulimia nervosa.

We used the Nationwide Inpatient Sample (NIS) from the Healthcare Cost and Utilization Project (HCUP). We identified bulimia nervosa as the primary diagnosis and medical and psychiatric comorbidities using ICD­9-CM codes. The differences in comorbidities were quantified using the Chi-square (χ2) test, and a multinomial logistic regression model was used to quantify associations among comorbidities (odds ratio (OR)).

Bulimia nervosa is a potentially life-threatening eating disorder characterized by recurrent episodes of binge eating and inappropriate compensatory purging behaviors, such as self-induced vomiting, laxative abuse, enemas, and excessive exercise [1]. World Health Organization World Mental Health Surveys estimated that the lifetime prevalence of bulimia nervosa is 0.8% and the median age of onset is in the late teens to the early twenties [2]. In the United States, the lifetime prevalence of bulimia nervosa in men and women was estimated to be 0.5% and 1.5%, respectively [3]. Bulimia nervosa has a significant impact on psychosocial functioning. In the United States, impaired psychosocial functioning was found among 78% of the patients; 44% reporting severe impairment.

In this inpatient sample-based retrospective study, we demonstrated the estimation of inpatient admission outcomes, as well as the rates of comorbid psychiatric and medical disorders in admitted bulimia nervosa patients. To the best of our knowledge, this is the first cohort retrospective study that investigates the inpatient psycho-socio-demographic characteristics and admission outcomes of bulimia nervosa patients.

In this study, a retrospective analysis was performed using the Healthcare Cost and Utilization Project's (HCUP) Nationwide Inpatient Sample (NIS) data [9]. The Agency for Healthcare Research and Quality (AHRQ) sponsors the HCUP databases that categorize trends in hospital utilization and cost across the United States. The HCUP-NIS database is the largest inpatient database as it includes 4,411 non-federal community hospitals from 45 states in the United States. We weighted the estimated samples to reduce the margin of error and to reproduce the results equivalent to all 50 states in the United States. In the NIS data, the privacy of individual patients, physicians, and hospitals, the state, and hospital identifiers are protected and de-identified. Sample non-clinical-related information is patient’s demographic data that includes age, gender, race and primary payer status, hospital characteristics, and total charges. Sample clinical-related information includes principal and other diagnosis, comorbidities, disposition status and the length of inpatient stay [9]. As the NIS database does not contain patient identification, this study did not require Institution Review Board permission.

The participants in this study were identified by the International Classification of Disease, Ninth Revision Clinical Modification (ICD-9-CM) codes with a principal diagnosis of bulimia nervosa at the time of admission. Bulimia nervosa was identified using the ICD-9-CM diagnosis code 307.51. To measure the differences in hospitalization outcomes in bulimia nervosa patients, the outcome variables of interest included the severity of morbidity that measures the loss of body functions, the risk of mortality that measures the likelihood of dying, and discharge status of the patient. The 3M™ All Patient Refined Diagnosis-related Groups (APR-DRGs) were assigned using software developed by the 3M Health Information Systems (3M Health Information Systems, Murray, UT). This severity measure includes the APR-DRG, the severity of morbidity, and the risk of mortality within each base APR-DRG [9]. We calculated the length of the inpatient stay as the number of nights the patient remained in the hospital for a particular discharge. The length of inpatient stay in this analysis was all-cause. The total inpatient charges did not include professional fees and non-covered charges. The principal diagnosis had been identified at the time of admission, whereas we recorded comorbidities throughout the entire inpatient stay. By a common definition, comorbidities were considered coexisting conditions with bulimia nervosa, the principal disorder under this study. The Agency for Healthcare Research and Quality (AHRQ) comorbidity software was used to generate binary variables that identified various psychiatric and medical comorbidities in the discharge records using ICD-9-CM codes [10]. The ICD-9-CM codes used to identify comorbidities associated with bulimia nervosa are mentioned in Table 1.

We used the Statistical Package for the Social Science (SPSS), version 23.0 (IBM SPSS Statistics, Armonk, NY) to conduct a retrospective analysis over the HCUP-NIS database from 2010–2014 [11]. Descriptive statistics were used to summarize the results. The mean and standard deviations were used to explain the continuous variables. Pearson’s chi-square test and independent sample T-test were used for categorical data and continuous data, respectively. On the other hand, the categorical variables were presented in percentage (%) values. We used a multinomial logistic regression model to quantify associations among comorbidities and gender (odds ratio (OR); 95% confidence interval (CI)), and the inpatient length of stay (OR; 95% CI). We applied the discharge weight, which was given in the NIS database to attain national representation of the inpatient data. A p-value < 0.05 was used as a reference to determine the statistical significance test result. 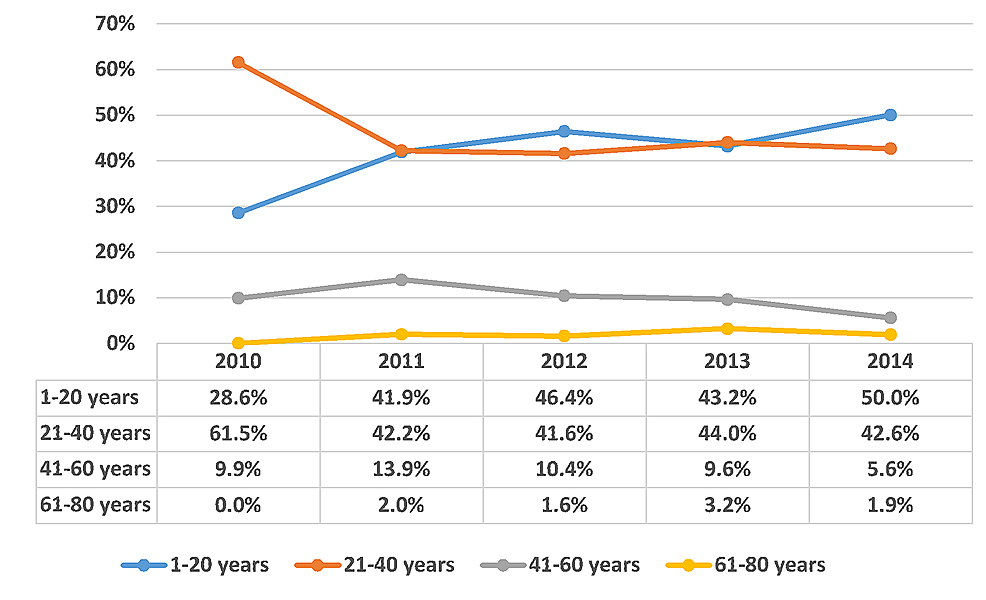 Figure 1: Trend of bulimia nervosa distributed according to age group 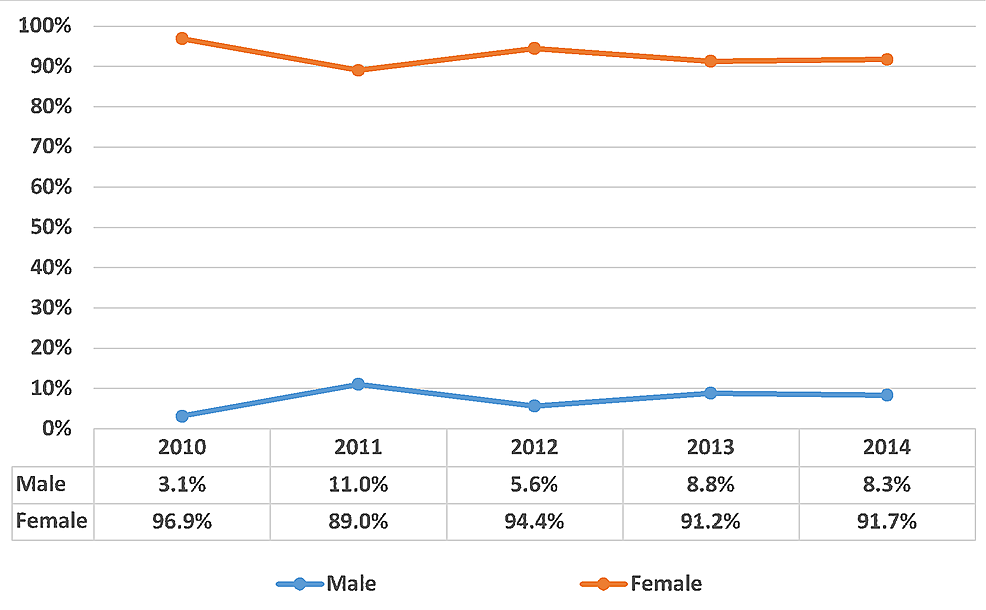 Figure 2: Trend of bulimia nervosa distributed according to gender 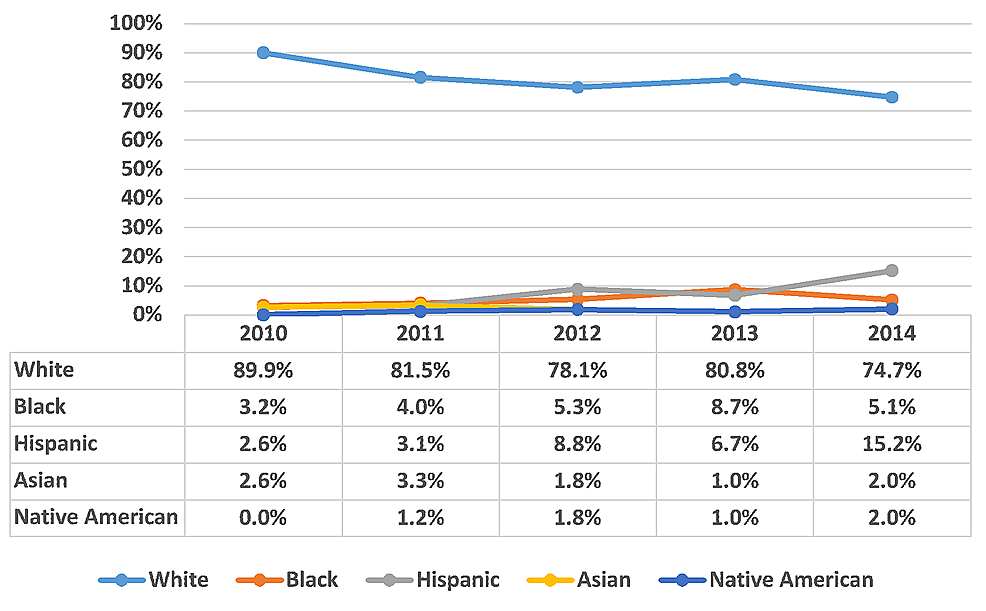 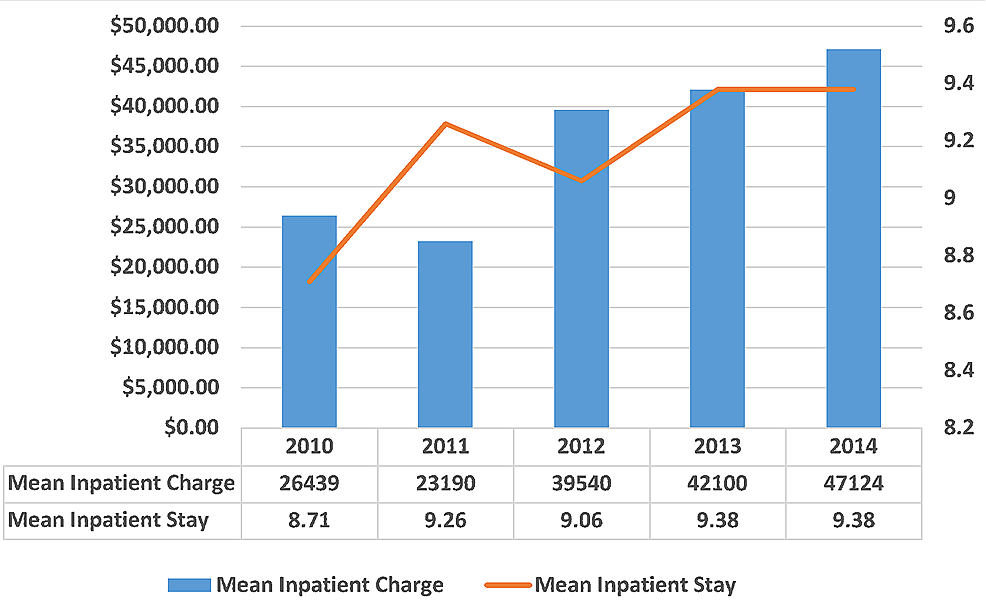 Figure 5: Distribution of bulimia nervosa according to the severity of morbidity and risk of mortality 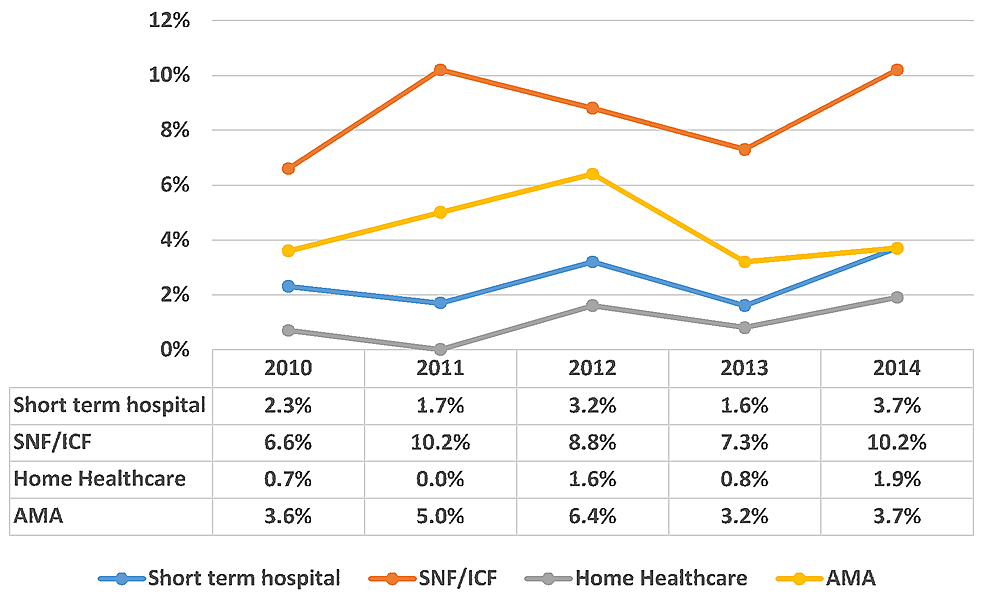 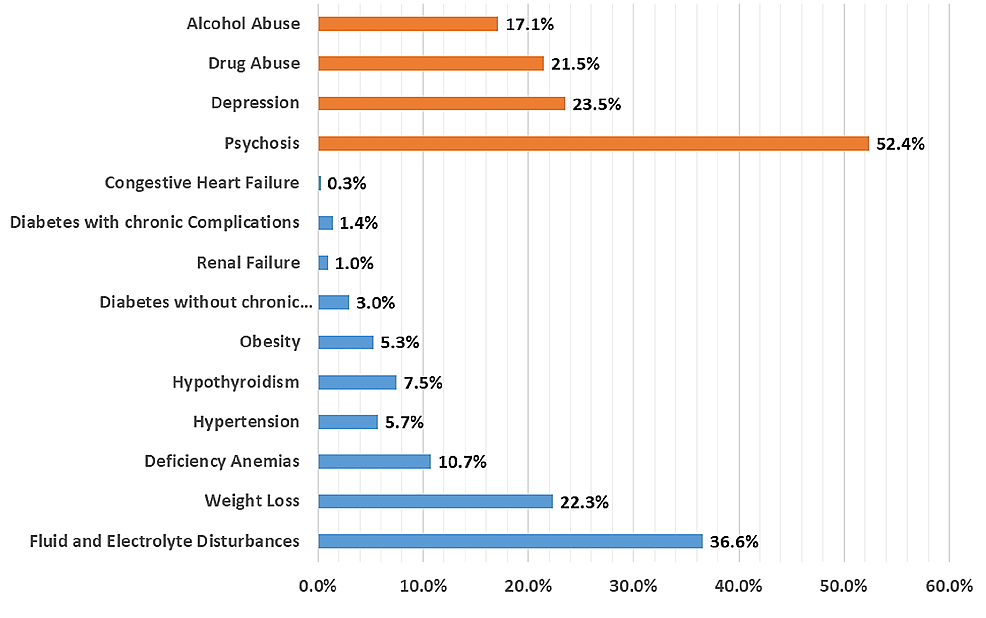 In our retrospective inpatient sample cohort study, we demonstrated that most of the admitted bulimia nervosa patients were White women who were under 40 years of age. The mean length of hospital stay was nine days, which is lower than the reported average inpatient stay in affective and psychotic disorders [12-14]. More than 70% of the admitted patients had a moderate morbidity. The odds of having a longer hospitalization stay was seen in bulimia nervosa patients with comorbid fluid and electrolyte disorders, comorbid depression, and comorbid drug abuse. There were no bulimia nervosa-related inpatient deaths between 2010–2014, which is not surprising given that the likelihood of dying was reported to be minor among 82.3% of the admitted patients. The present study demonstrated the pervasiveness of psychiatric and medical comorbidities in patients admitted with a diagnosis of bulimia nervosa. The most prevalent psychiatric and medical comorbidities were psychosis and fluid and electrolyte disturbances, respectively.

This dataset is subject to minimal reporting bias, and all information is coded independently of the individual practitioner, making it a potentially more reliable source. The limitation for using hospitalization (and not the patient) as the unit of analysis is that it does not translate to generalizability for all patients with bulimia nervosa. There may have been underreporting of chronic comorbidities in the NIS data because the administrative database was used. Hence, clinical data were not incorporated in the data source. We recommend that future research examine the influence of psychiatric comorbidities with clinical data. In addition to that, we recommend that future research should investigate the impact of different medical and psychiatric comorbidities of bulimia nervosa on admission outcomes.

Figure 1: Trend of bulimia nervosa distributed according to age group

Figure 2: Trend of bulimia nervosa distributed according to gender

Figure 5: Distribution of bulimia nervosa according to the severity of morbidity and risk of mortality