The patient was a 60-year-old male who initially presented to the emergency room with extreme agitation aggravated by internal stimuli as well as visual hallucinations, paranoia, and grandiose delusions. He was diagnosed with nonspecific schizophrenia and treated with risperidone, trazodone, and lithium. Approximately 16 months later, he was readmitted to the hospital trying to enter a stranger’s car that he thought was his. He was confused and was unable to give an accurate history. His psychomotor retardation and confusion were thought to be due to risperidone. When his dose was decreased, he displayed involuntary movements of the mouth and extremities, restlessness, and a patting of his head. The risperidone was switched to zyprexa in an effort to decrease extrapyramidal symptoms. About two months later, he was found unresponsive and catatonic in his car. During his stay, the patient had a fluctuation in the latency of his responses on a daily basis. He would be aware of where he was but was unable to explain why or for how long. He had a difficult time remembering names and was still exhibiting abnormal involuntary movements around the mouth and extremities. The patient’s course of initial predominantly auditory and visual hallucinations that progressed to extrapyramidal symptoms and fluctuating cognition one year later may suggest Lewy body dementia.

Lewy body dementia is a relatively new pathology that was only fully recognized as a diagnosis approximately 25 years ago as a result of improved neuropathological staining that allowed the identification of Lewy bodies on brain autopsy tissue [1]. It is a common form of dementia in the elderly population that is often mistaken for Alzheimer’s dementia or schizophrenia due to the unique and progressive presentation of the disease. Lewy body dementia often presents with visual hallucinations followed by extrapyramidal symptoms and fluctuating levels of cognition. Here, we explore a case of the progressive development of clinical symptoms consistent with the diagnosis of probable Lewy body dementia with a predilection for auditory hallucinations.

The patient is a 60-year-old male who initially presented to the emergency room in 2016 with a long history of perceptual disturbances, mood symptoms, and religious preoccupation. He was brought to the emergency department due to extreme agitation aggravated by internal stimuli of women professing their love to him. The voices were so overwhelming that, at times, he was unable to sleep. He also presented with visual hallucinations. He was very talkative and grandiose. He described that he will build a church for the homeless and put them to work. His speech was circumstantial and poorly goal-directed. His mini mental exam was a 30/30. His temperature was 97.7°F; pulse was 86/min; respiratory rate was 18/min; blood pressure was 100/55 mm Hg. His initial labs showed a white blood cell (WBC) count of 5.92 THOU/uL; hemoglobin of 15.4 g/dL; hematocrit of 43.6%; platelet count of 203 THOU/uL; sodium of 137 mmol/L; potassium of 4.1 mmol/L; creatinine of 1.0 mg/dL; glucose of 96 mg/dL; calcium of 9.7 mg/dL; aspartate aminotransferase (AST) of 12 U/L; alanine aminotransferase (ALT) of 11 U/L; thyroid-stimulating hormone (TSH) of 1.55 uIU/mL. The urine toxicology screen was negative and rapid plasma reagin (RPR) was nonreactive. The physical exam was unremarkable besides the mood, hallucination, and paranoia symptoms. He was believed to have unspecified schizophrenia, bipolar disorder with psychotic features, or schizotypal personality disorder. He was started on risperidone 0.5 mg BID and was increased to 2 mg BID. Trazodone was initiated for sleep and lithium 300 mg BID for mood stabilization was added throughout the course. His condition improved and he was discharged.

Approximately 16 months later, he was brought in by emergency petition because he was trying to enter a stranger’s car. He mistook the stranger’s car for his own. Upon admission, the patient was unable to provide an accurate history due to confusion and memory impairment. He reported no new visual or auditory hallucinations after being discharged in 2016. He also responded to most questions with “I don't remember.” Vitals at the time were temperature: 97.6 °F; pulse: 96/min; respiratory rate: 18/min; and blood pressure: 97/62 mm Hg. Initial laboratory tests showed WBC count: 6.7 THOU/uL; hemoglobin: 14.3 g/dL; hematocrit: 40.7%; platelet count: 215 THOU/uL; sodium: 128 mmol/L; potassium: 2.8 mmol/L and 4.2 mmol/L when repeated; creatinine: 0.7 mg/dL; glucose: 95 mg/dL; calcium: 8.7 mg/dL; AST: 12 U/L; ALT: 10 U/L; TSH: 1.9 uIU/mL; urine toxicology screen: normal; and RPR: negative. He presented with reduced psychomotor activity and organized thinking as opposed to last years' visit. His prior discharge medication was started and 1 mg of Lorazepam PRN was added for anxiety. During this hospital stay, confusion and psychomotor retardation were noted. In response, his risperidone dose was decreased with no change in psychotic symptoms; however, he began developing extrapyramidal side effects. He displayed involuntary movements of the mouth, flailing movements, restlessness, and a patting of his head. Risperidone was replaced by zyprexa due to the decreased likelihood of extrapyramidal symptoms. After observation, the patient was discharged from the hospital.

Approximately one and a half months later, he was found unresponsive and catatonic in his car and readmitted to the hospital. His vital signs were temperature: 99 °F; pulse: 119/min; respiratory rate: 16/min; blood pressure: 112/85 mm Hg; and pulse oximetry on room air: 97%. His labs were WBC: 14.8 THOU/uL; hemoglobin: 17.2 g/dl; hematocrit: 52.3%; platelet count: 276 THOU/uL; sodium: 143 mmol/L; potassium: 3.9 mmol/L; creatinine: 0.7 mg/dL; glucose: 164 mg/dL; calcium: 9.6 mg/dL; AST: 22 U/L; and ALT: 14 U/L. During this stay, the patient appeared to be having latency in speech before responding to inquiries, but some days were significantly worse than others. He would be aware of his location but unable to explain why or for how long. He had a difficult time remembering names. He was still exhibiting abnormal involuntary movements around the mouth and extremities. Magnetic resonance imaging (MRI) was ordered to rule out stroke and vascular dementia; however, there was no acute intracranial pathology, as seen in Figure 1, and an unremarkable magnetic resonance angiogram (MRA) of the Circle of Willis, as seen in Figure 2. 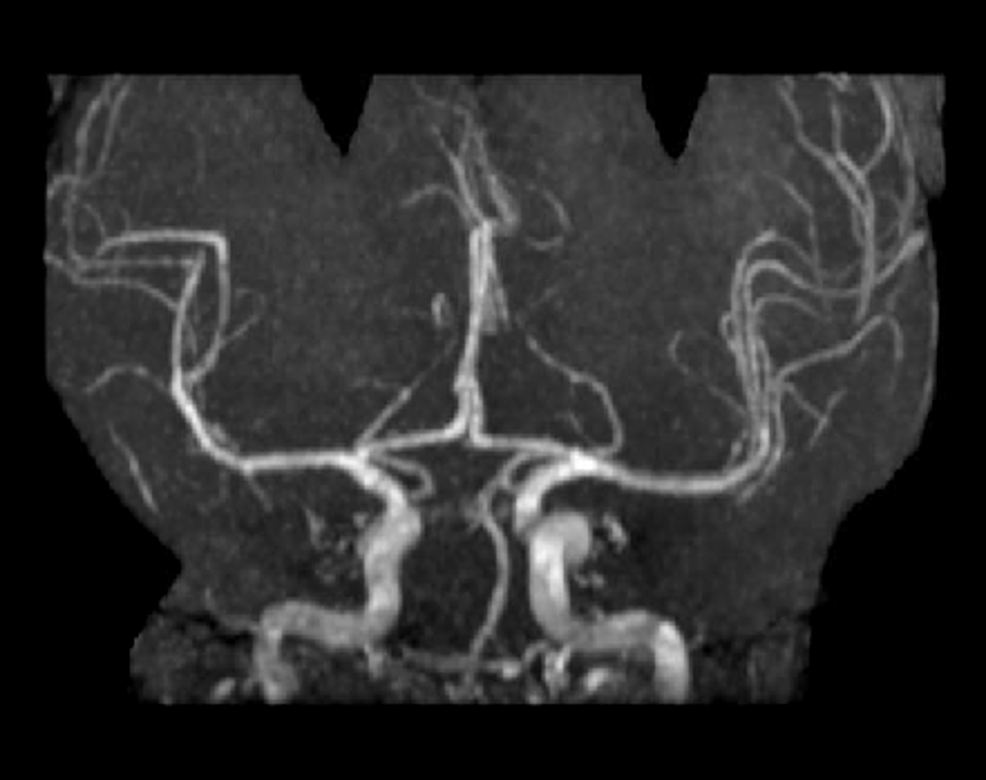 Magnetic resonance angiography showing no evidence of pathology of the Circle of Willis.

His carotid ultrasound was unremarkable as well (Figure 3). 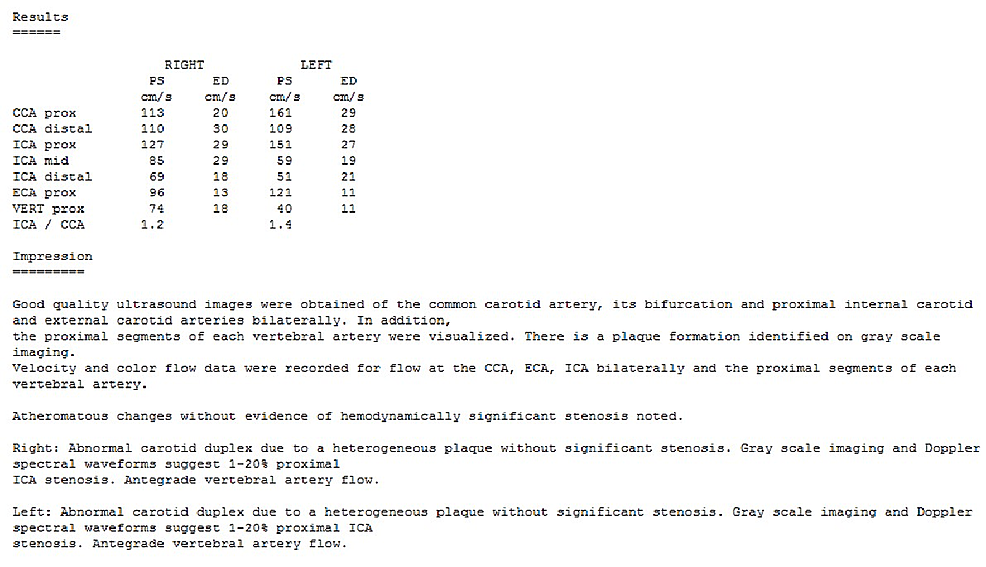 His history of late-onset auditory and visual hallucinations, sensitivity to neuroleptics, extrapyramidal symptoms, limited judgment, fluctuating cognition, and frequent emergency room (ER) visits due to altered mental status and deficiencies in the visual-spatial cognitive function may suggest Lewy body dementia. The patient was observed for a few days and was determined to have capacity before being discharged on zyprexa, ativan, and lithium.

This case report highlights the clinical progression of a case of probable Lewy body dementia with the documentation of multiple core clinical features, such as waxing and waning cognition, visual hallucinations, and extrapyramidal signs that the patient developed more than 12 months after his initial onset of hallucinations. The patient’s catatonia also supports the diagnosis of probable Lewy body dementia since this is a state of transient unresponsiveness. This presentation is unique because of the patient's predilection for auditory hallucinations and the success we had controlling his symptoms with zyprexa.

© Copyright 2018
Hindi et al. This is an open access article distributed under the terms of the Creative Commons Attribution License CC-BY 3.0., which permits unrestricted use, distribution, and reproduction in any medium, provided the original author and source are credited.

Magnetic resonance angiography showing no evidence of pathology of the Circle of Willis.