Postoperative atrial fibrillation (POAF) remains a major risk after cardiac surgery and is associated with an increased risk of stroke, length of stay, mortality, and cost. Ranolazine, an anti-anginal drug, also has anti-arrhythmic properties. The present study is to evaluate the effectiveness of ranolazine in preventing POAF after cardiac surgery. We searched the literature for clinical studies published up to August 2017 with a pre-defined inclusion and exclusion criteria. We identified four studies with a total of 754 patients of which 300 patients received ranolazine; there was a 14% decrease in POAF occurrence following cardiac surgery compared to 32% in the control group. Although ranolazine is an effective therapy in prevention of POAF, larger, multi-center, randomized trials are warranted.

Postoperative atrial fibrillation (POAF) is a common complication following cardiac surgery, associated with high morbidity and mortality. The development of POAF depends on the patients co-morbidities and type of surgery [1], with the highest incidence of 36%-65% in combined coronary artery bypass grafting (CABG) and valvular surgery [2-4] when compared to valvular (30%-40%) [3] or CABG only (30%) [2].

The occurrence of POAF is more frequent in patients with advanced age, left atrial enlargement, hypertension, left ventricular hypertrophy, obesity, and diabetes, and is usually evident within two to four days post surgery [5]. POAF is associated with increased risk of stroke, congestive heart failure, respiratory failure, leading prolonged hospital stay, and increase in overall health care cost [1]. Thus, chemoprophylaxis is recommended in high-risk patients [6], and therapies including beta-blockers, amiodarone, sotalol, intravenous magnesium, and steroids have proven to be effective [1,6] but they are associated with side effects without altering overall hospital stay and resource utilization [6].

Ranolazine, an anti-anginal agent, exhibits antiarrhythmic effects by inhibition of late sodium (late INa) and potassium rectifier (IKr) channel [7]. It produces dose-dependent block of sodium channel predominantly in the atria with significant anti-fibrillatory effect by prevention of premature atrial contraction (APC) [7]. APC is associated with atrial fibrillation (AF), and experimental and clinical studies have shown that by suppressing the APC, the incidence of atrial fibrillation (AF) is decreased [8-12]. In order to explore this hypothesis, we systematically reviewed the literature to assess the efficacy and safety of ranolazine for the prevention of POAF following cardiac surgery.

This systematic review conforms to standard guidelines and is written in accordance with the Preferred Reporting Items for Systematic Reviews (PRISMA) [13]. We performed a systematic literature search using MEDLINE, Cochrane Library (1898 to 2015), Google Scholar and ClinicalTrials.gov (1997 to 2014) by using following terms “ranolazine”, “atrial fibrillation”, “cardiac surgery”, “coronary artery bypass graft”, "valvular surgery”, and “postoperative atrial fibrillation". We reviewed all potentially relevant articles in a parallel manner by pre-defined inclusion criteria. Citations to and reference lists within the selected articles were also searched for studies that would meet inclusion criteria. All retrieved references were reviewed and evaluated the clinical outcome of interest. Pre-specified selection criteria for inclusion of studies were as follows: (1) head to-head comparisons of perioperative administration of ranolazine versus placebo or other antiarrhythmic drugs or standard therapy; and (2) study participants who underwent any cardiac surgery. Case reports, letter, experimental studies, editorials, and systematic reviews and meta-analysis were excluded. The primary endpoint was the development of POAF. Other outcomes included the incidence of adverse events and early treatment discontinuation.

A total of 131 articles were retrieved and 18 articles focused on the role of ranolazine for prevention of POAF. Exclusion of case reports, letters, experimental studies, editorials, and systematic reviews or meta-analyses and screening of titles and abstracts of these references for inclusion terms resulted in four studies (Figure 1). 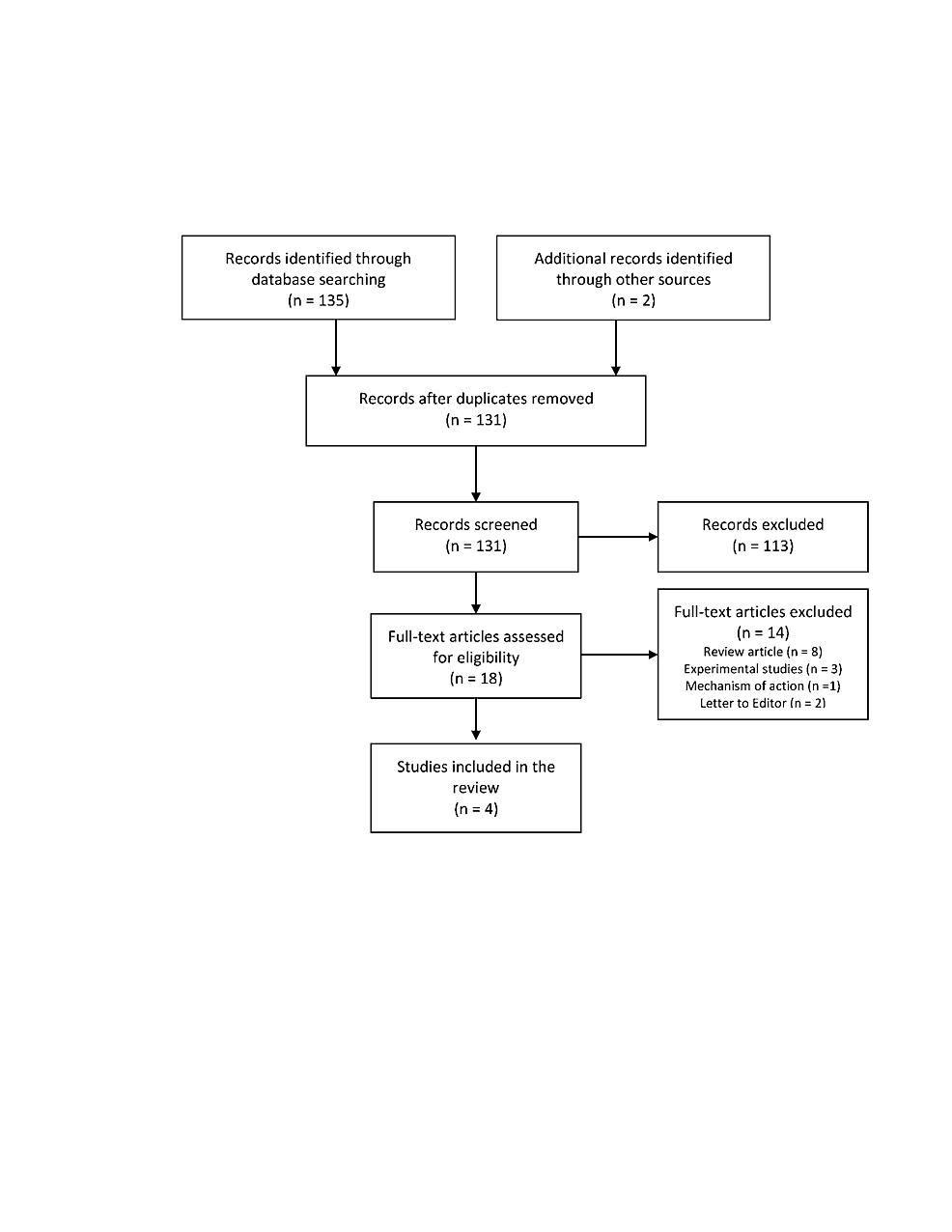 The details of the clinical trials are summarized in Table 1.

Table 1: Details of the studies included in the systematic review

€: Surveillance was performed by continuous electrocardiography until the total length of stay.

¥: Surveillance was performed for at least seven days or until discharge by continuous electrocardiographic monitoring.

£: Duration of treatment therapy was 14 days but surveillance was conducted for 30 days. Total of 51 patients completed this cohort study.

Baseline characteristics of the patients in the clinical trials are presented in Table 2.

£ : The data above is a representation of both the RN and control group combined.

On an average, the incidence of POAF was lower in the ranolazine group by 14% when compared to 32% in the non-ranolazine group. Hypotension was noted in the treatment group but resolved within 72 hours [16] with no other adverse effect noted and no difference in overall mortality and 30-day readmissions.

POAF is typically a transient, reversible phenomenon that may develop in patients at risk. Multiple mechanisms are involved in the development of POAF including pericardial inflammation, catecholamine surge, autonomic imbalance, and interstitial mobilization of fluid with resultant changes in volume [5]. POAF is usually asymptomatic but is associated with increased morbidity and mortality [1]. Although perioperative beta-blockers, amiodarone, sotalol, calcium channel blockers, and magnesium have been used for the prevention of POAF, they are limited by adverse events (including hypotension and bradycardia) [1,5] and by their suboptimal efficacy and potential for pro-arrhythmia risk [7].

Ranolazine, a piperazine derivative, exerts antiarrhythmic effects in both the ventricles and the atria and has been evaluated to prevent POAF. Although the exact mechanism for anti-arrhythmic effect is unknown, in the atrial tissue, ranolazine may suppress AF primarily by inhibiting peak sodium current (INa) and also causes inhibition of the delayed rectifier potassium (Ikr) current, leading to a decrease in atrial myocardium sensitivity and vulnerability to AF. Ranolazine reduces acetylcholine (Ach) mediated AF through different mechanisms by inhibiting INa, Ikr and, peak INa leading to a reduction of action potential upstroke and an increase in the diastolic threshold of excitation and post-repolarization refractoriness [18].

Several studies have demonstrated the clinical efficacy of ranolazine for the prevention of AF and was associated with a significant reduction of supraventricular tachyarrhythmia (p < 0.001) as well as a 30% reduction in new-onset AF (p = 0.08) in the Metabolic Efficiency with Ranolazine for Less Ischemia in Non-ST-elevation acute coronary syndromes – Thrombolysis in Myocardial Infarction (MERLIN-TIMI) 36 trial [10]. Murdock et al. demonstrated that ranolazine is helpful in maintaining sinus rhythm in patients with resistant AF [11]. Another study by the same authors suggested that a single dose of ranolazine 2000 mg is effective in converting 77% of AF patients to sinus rhythm with no significant adverse drug reactions [12]. The Ranolazine in AF Following An ELectricaL CardiOversion (RAFFAELLO) study assessed the safety and efficacy of ranolazine in the prevention of AF recurrence after successful electrical cardioversion [19]. AF recurred in 56.4%, 56.9%, 41.7%, and 39.7% of patients in the placebo, ranolazine 375 mg, ranolazine 500 mg, and ranolazine 750 mg groups, respectively [19]. The reduction in overall AF recurrence in the combined 500-mg and 750-mg groups was of non-significance compared to the placebo group (P = 0.053) and significant compared to 375-mg group (P = 0.035) [15].

The results from this systematic review must be evaluated within the context of its potential limitations. Firstly, the included studies were single-sited, retrospective observational, and prospective evaluations of the report of POAF after ranolazine therapy. These studies included younger patients with a mean age of less than 70 years and mean left ventricular ejection fraction >50% suggesting these patients were at low risk for developing POAF. Other important characteristics of left atrial size were not included. Many of the studies had small sample sizes with varied duration times and surveillance methods. Therapy in control group is diverse among all the studies and two studies [15-16] did not disclose the type of “standard therapy” being implemented. The dosing, initiation and termination of ranolazine also varied among the studies.

Although limited by lack of size and adequate control groups, the literature does suggest that ranolazine may be an efficacious and safe therapy for the prevention of POAF following cardiac surgery. However, multi-center, large, randomized controlled trials are warranted.

Table 1: Details of the studies included in the systematic review

€: Surveillance was performed by continuous electrocardiography until the total length of stay.

¥: Surveillance was performed for at least seven days or until discharge by continuous electrocardiographic monitoring.

£: Duration of treatment therapy was 14 days but surveillance was conducted for 30 days. Total of 51 patients completed this cohort study.

£ : The data above is a representation of both the RN and control group combined.