Breast cancer is the most commonly diagnosed cancer in women in the United States and is the second most common cause of death in women after lung cancer [1-6]. Metastatic breast cancer, although incurable, can be treated with the intention to prolong survival. The most common locations for metastasis from breast cancer include the lymph nodes, lungs, liver, and bone [3-4, 6].

Metastatic breast cancer to the colon is rare [1-4, 6-7]. Metastasis to the gastrointestinal (GI) tract presents variably, ranging from abdominal pain to obstruction. Most reported cases of metastatic disease to the colon are from invasive lobular carcinoma [2-6, 8]. Few case reports have described metastasis from invasive ductal carcinoma.

A 68-year-old female presented with right upper quadrant abdominal pain and swelling. The pain was described as sharp, intermittent pain with 10/10 severity that started the day prior to admission. It was not associated with food, and she denied any fevers or chills. Her last bowel movement was the day prior to admission and was of normal caliber. She denied diarrhea, melena, hematochezia, and unintentional weight loss.

She had a past medical history of estrogen receptor (ER), progesterone receptor (PR), and human epidermal growth factor 2 (HER2)-positive invasive ductal carcinoma of the left breast diagnosed in 1996. She received a modified left radical mastectomy and right simple mastectomy, adjuvant systemic chemotherapy with doxorubicin and cyclophosphamide, radiation to the left chest wall, and was started on Tamoxifen. Five years later, she developed metastatic disease to the lumbar spine (ER+/PR+) and received palliative radiation. She was started on zoledronic acid for bone metastasis and her endocrine therapy was switched to letrozole. At the time of admission, she was currently on letrozole and methadone for her back pain. She denied any tobacco use, alcohol, or recreational drug use. She has no family history of cancer. 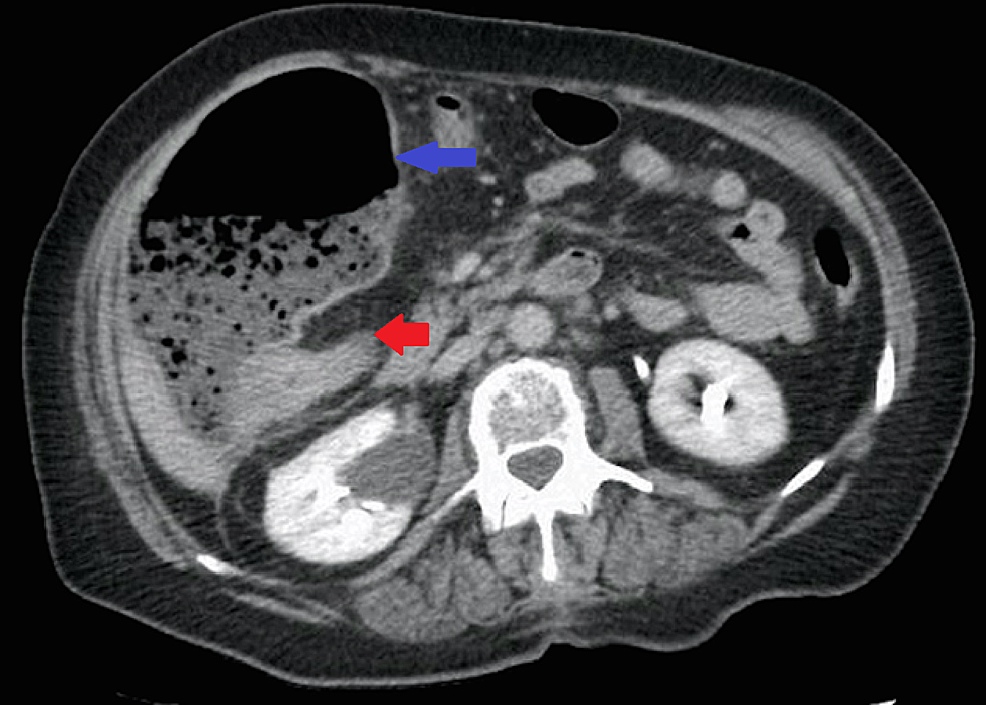 A colonoscopy was performed and showed mild diverticulosis in the colon along with petechiae in the proximal to mid-transverse colon likely representing brief ischemia from possible volvulus, but no obvious mass was appreciated. Surgery was consulted due to worsening pain and abdominal swelling and a right hemicolectomy with ileocolic anastomosis was performed.

Pathology revealed metastatic carcinoma measuring 6.5 centimeters in greatest dimension at the junction of the cecum and ascending colon and involved the appendix (Figure 2). 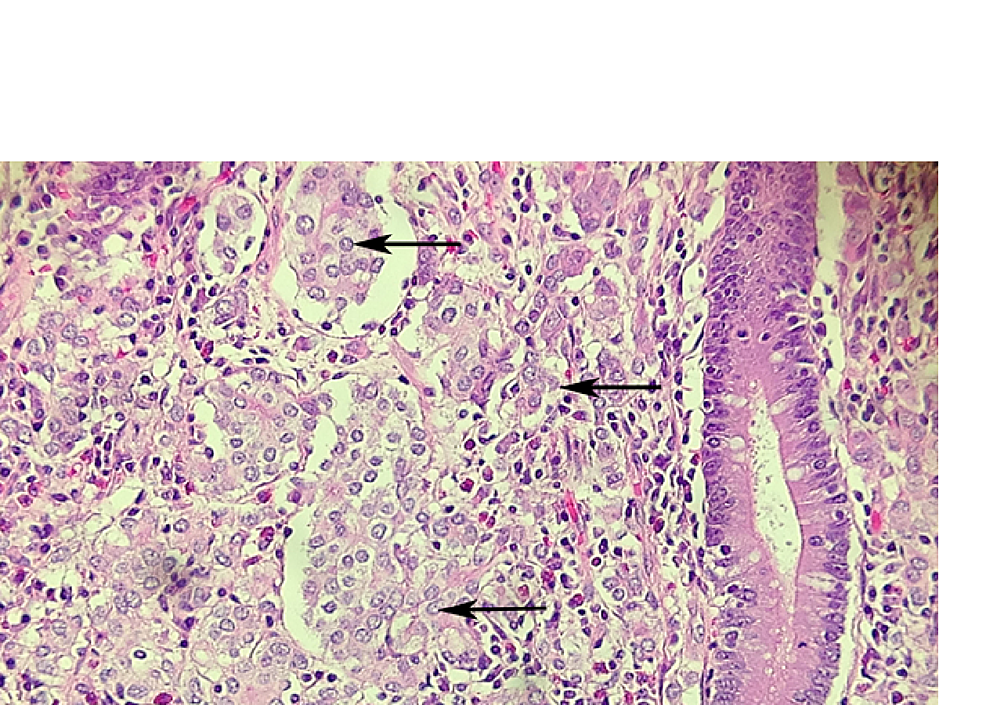 The tumor was transmural with involvement of serosal fat through the lamina propria and percolated between the colonic crypts with six out of 11 lymph nodes positive. Immunohistochemical staining was positive for cytokeratin 7, estrogen receptor (Figure 3), and GATA-3 (Figure 4), and negative for cytokeratin 20 (Figure 5), caudal-related homeobox transcription factor - 2 (CDX-2) (Figure 6), MELAN-A, CD 56, and synaptophysin. This was consistent with metastatic breast cancer. Further stains were positive for E-cadherin (Figure 7), consistent with her history of invasive ductal carcinoma. 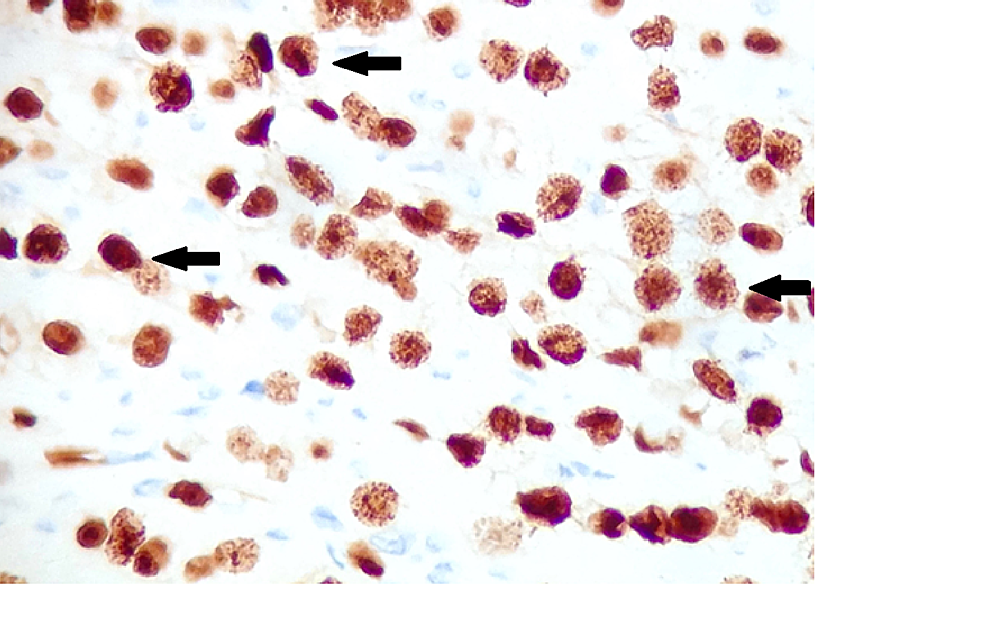 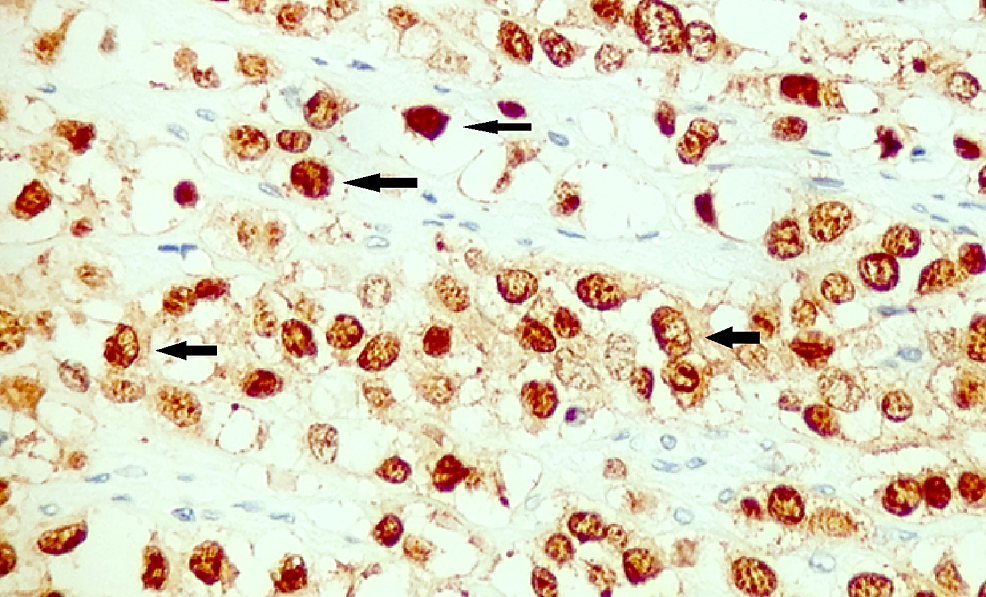 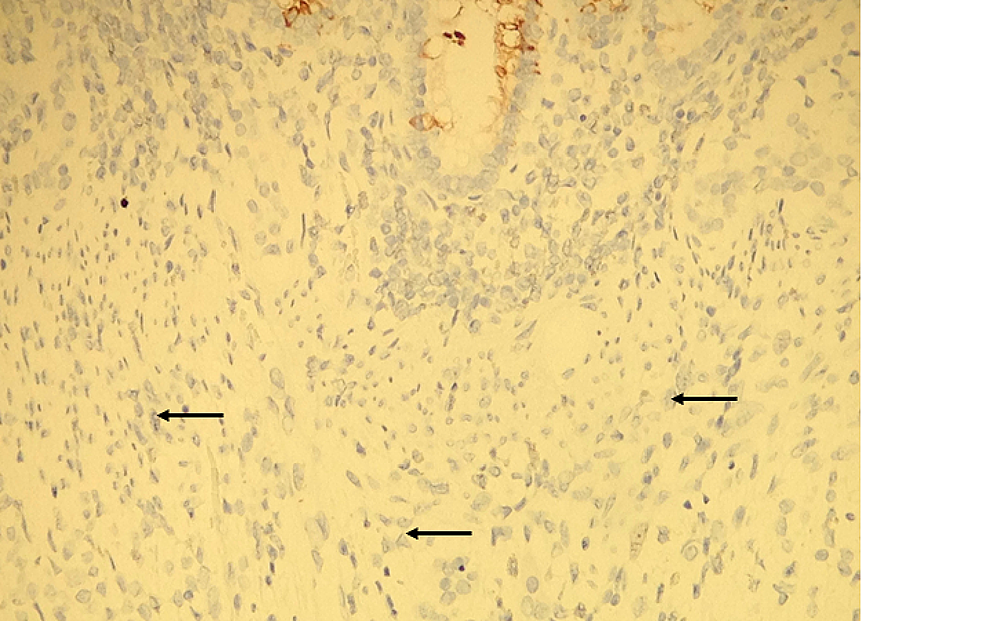 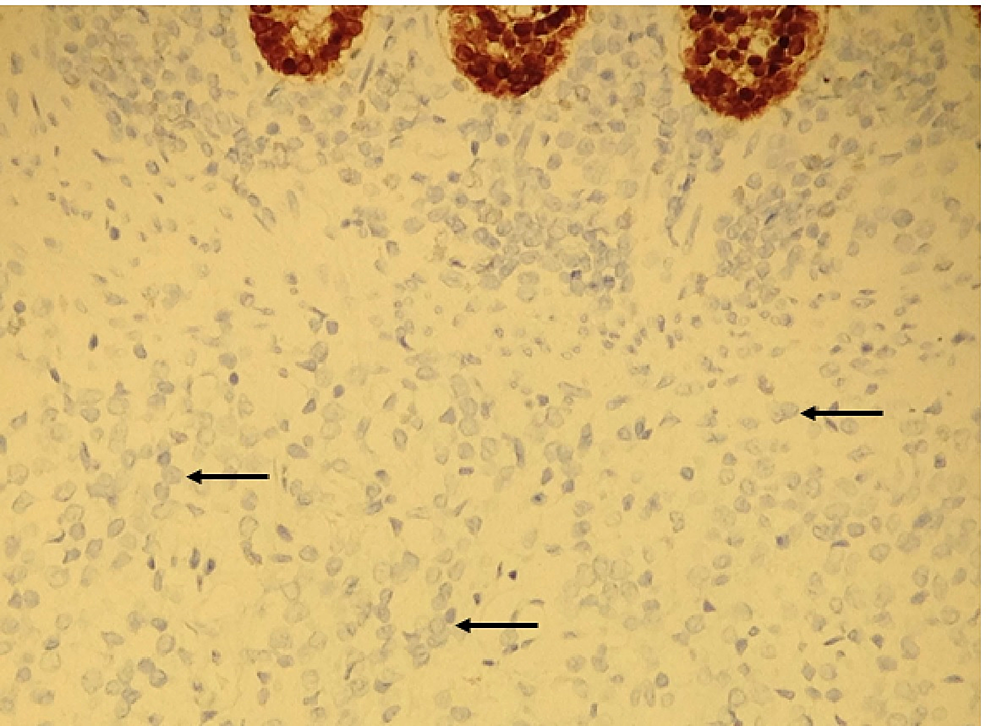 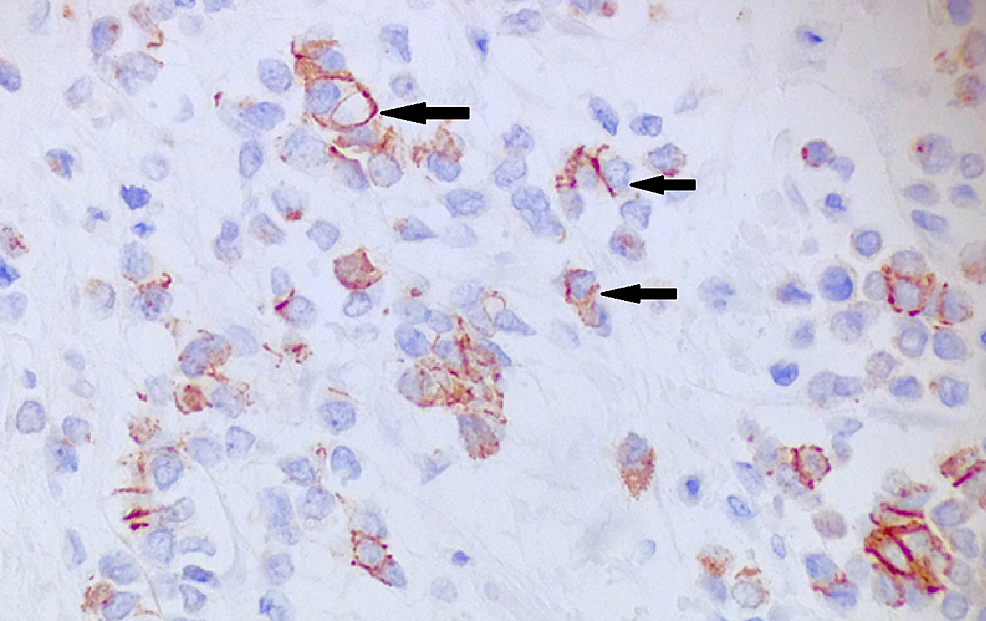 Given progression of metastatic invasive ductal carcinoma while on letrozole, she was transitioned to exemestane.

GI metastasis from breast cancer is rare [1-8]. Several case reports have examined the incidence and significance of this finding. Rajann et al. described a large clinical series of 2,500 patients with breast cancer and followed them for 18 years. They found only 17 patients, less than 1%, developed GI metastasis [1]. Nazareno et al. showed that the most frequent site of GI metastasis was the stomach [2] and that colon involvement by metastatic breast cancer is less common. Uygun et al. revealed that colon metastasis occurred in only 3% of cases (20 out of 720) [3].

Based on the review of the literature, presentation of metastatic disease to the colon can be variable [1-3, 5]. It can be asymptomatic or it can present with signs of intestinal obstruction, such as nausea, vomiting, and abdominal distension [6]. Therefore, in patients with a history of breast cancer presenting with GI symptoms, metastatic disease must be considered in the differential diagnosis.

Metastatic disease can present synchronously, at the time of diagnosis of the primary cancer or metachronously, at a different time from the primary cancer diagnosis. Nazareno et al. specifically discussed metastatic disease from the breast primary to the colon occurring in as little as four months to as long as 30 years later [2]. Despite lengthy time intervals between primary diagnosis of breast cancer and the onset of subtle GI symptoms, clinicians should recognize the possibility that GI symptoms could be metastatic disease and that a comprehensive workup is required.

Although it is more common to have a second primary colorectal cancer than metastatic breast cancer to the colon, a biopsy is required to distinguish between the two diagnoses. Uygen et al. described that the resemblance to previous breast cancer and the absence of dysplasia in the adjacent colonic epithelium is suggestive of metastatic disease [3]. Nikkar-Esfahani et al. discussed that most metastatic breast cancers present as linitis plastica, a diffuse thickening of the colonic wall, and that the diagnosis can be missed if the biopsy was too superficial or the pathologist was not aware of the history of breast cancer [7]. Immunohistochemical stains are also used to distinguish these two different diagnoses. Cytokeratin biomarkers are useful in determining the origin of the tumor. Tumors that are negative cytokeratin (CK) 7 and positive CK20 suggest intestinal adenocarcinomas. GI cancers will usually also stain positive for homeobox protein CDX2. Comparatively, positive cytokeratin (CK) 7 and negative CK20 imply breast, lung, and ovarian adenocarcinomas, and metastatic breast cancer will also stain for CK 19, BRST-2, and GATA-3 [1, 8]. E-cadherin staining can determine whether the tumor is invasive ductal carcinoma or invasive lobular carcinoma of the breast. The loss of E-cadherin expression is a marker for a diagnosis of invasive lobular carcinoma, and E-cadherin positivity favors ductal differentiation [8-9]. Endocrine receptor status is also essential on the biopsied metastatic site as receptor conversion may change from the primary cancer. The accurate pathologic diagnosis of the disease allows for appropriate treatment plans. Systemic chemotherapy or hormonal therapy is preferred, and surgery should only be done for isolated metastasis or for palliation of symptoms [1, 4, 6-7].

While there have been advancements in treatment for metastatic breast cancer, colorectal metastasis usually indicates a poor prognosis [5, 7, 10]. Further, advanced age has a negative effect on survival. The median overall survival after diagnosis was 28 months, although survival up to nine years has been reported [10].

In summary, this is a rare case report of metastatic invasive ductal carcinoma of the breast to the colon presenting as an obstructing mass. This case highlights that physicians must have exceptional clinical acumen when patients with previous malignancy present with a colorectal lesion. The differential diagnosis should always include metastatic disease until proven otherwise. Physicians should be aware of common metastatic patterns of malignancy; however, one must remember that disease sometimes presents in unique ways. The presentation and course of this patient's care will be a useful adjunct to the current literature for determining treatment and prognosis in similar cases.

© Copyright 2018
Katz et al. This is an open access article distributed under the terms of the Creative Commons Attribution License CC-BY 3.0., which permits unrestricted use, distribution, and reproduction in any medium, provided the original author and source are credited.