Refeeding syndrome (RFS) is potentially fatal, yet there is limited understanding regarding its management among general surgeons due in part to a lack of universally accepted guidelines for RFS diagnosis. The aim of this review is to equip general surgery trainees with the essentials of RFS including a review of the National Institute for Health and Care Excellence (NICE) best practice guidelines for RFS. We used the keywords “refeeding”, “syndrome”, and “hypophosphatemia” to search PubMed, Embase, and Medline databases. We reviewed approximately 130 indexed papers for relevance. Having profound knowledge of nutritional needs in critically ill patients will help trainee surgeons prevent illnesses in the spectrum of RFS, and, over time, this would immensely contribute to reducing the morbidity and mortality associated with RFS.

The concept of refeeding syndrome (RFS) was first established in the Second World War. Prisoners of war previously held in the Far East developed neurological and cardiac abnormalities precipitated by the rapid institution of nourishment [1]. RFS, which is potentially fatal, is defined as “significant fluid and electrolyte abnormalities pertaining to metabolic disturbances following rapid oral, enteral or parenteral refeeding in chronically undernourished patients” [2]. The most profound biochemical abnormality is hypophosphatemia, while other biochemical abnormalities include a disturbance of sodium and fluid balance; a deficiency of thiamine; hypomagnesemia; hypokalemia; and changes in protein, fat, and carbohydrate metabolism [3].

The data relevant to the incidence of RFS are deficient mainly because there is no universal consensus on one single definition of RFS. In a thoroughly designed prospective study conducted on a heterogeneous group of intensive care patients, nearly 34% of them developed hypophosphatemia soon after the commencement of feeding [4]. In 2010, a study conducted by the National Confidential Enquiry Into Patient Outcomes and Death of the United Kingdom on 877 records of adult patients who received total parenteral nutrition showed that 14.7% of those at high-risk of RFS developed stigmata of RFS with hypophosphatemia being the most significant biochemical abnormality [5]. Recently, in 2013, a national audit of parenteral nutrition cases conducted in six hospitals in New Zealand revealed RFS documented in 17.6% of the cases [6]. All these studies illustrate the need for a thorough understanding of RFS by clinicians at all levels.

There is currently limited understanding of RFS and its management among general surgeons due in part to a lack of universally accepted, internationally recognized guidelines for the detection and diagnosis of RFS [7]. As a result, surgeons are often not aware of this problem, and many patients who are at high risk of developing RFS are not managed in specialist care. Another alarming hurdle is the morbidity and mortality associated with RFS are not well documented, with only Level 2 and Level 3 evidence available in the literature. The aim of this review is to equip general surgeon trainees with the essentials of RFS awareness including a review of the National Institute for Health and Care Excellence (NICE) guidelines for best practices for the early recognition of RFS, given that prophylaxis is the best way to reduce morbidity and mortality associated with this underdiagnosed and undertreated condition.

We used the keywords “refeeding”, “syndrome”, and “hypophosphatemia” to search PubMed, Embase, and Medline databases for relevant articles. We cross-checked our findings with a personal reference list and books. We reviewed approximately 130 indexed papers for relevance. The quality of evidence in the published articles was ascertained in accordance with the 2009 Levels of Evidence from the Oxford Centre for Evidence-Based Medicine [8].

Pathogenesis: How does RFS develop?

It is essential to understand the pathophysiological events causing metabolic and hormonal disturbances that lead to RFS to have a clear understanding of the tools necessary for its prevention. The flowcharts in Figure 1 and Figure 2 give a thorough overview of RFS pathogenesis [9-13]. 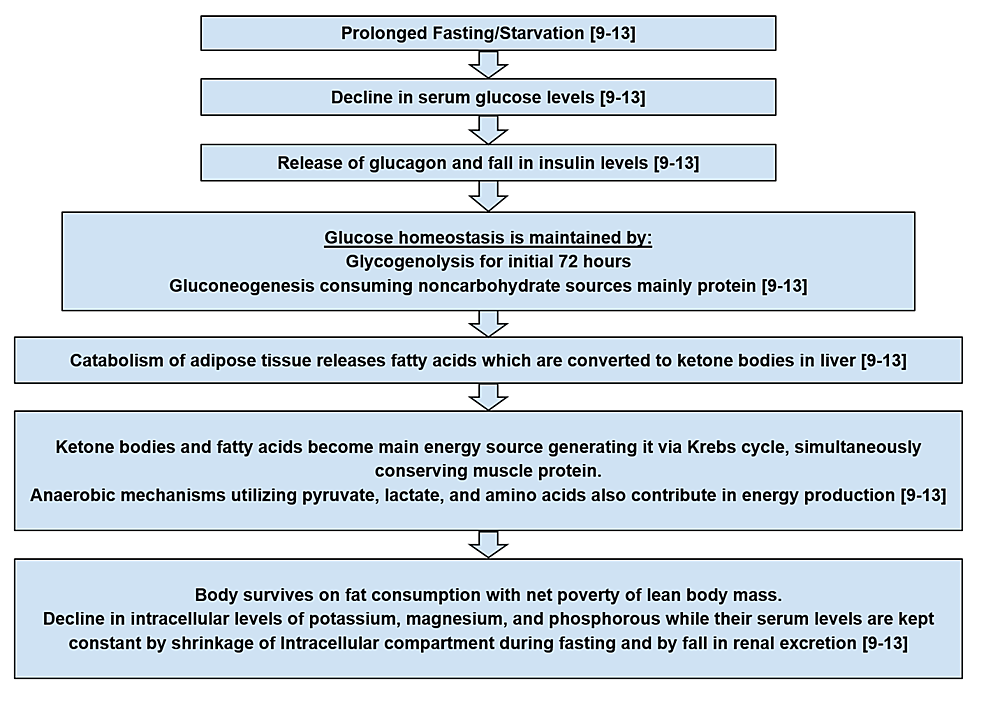 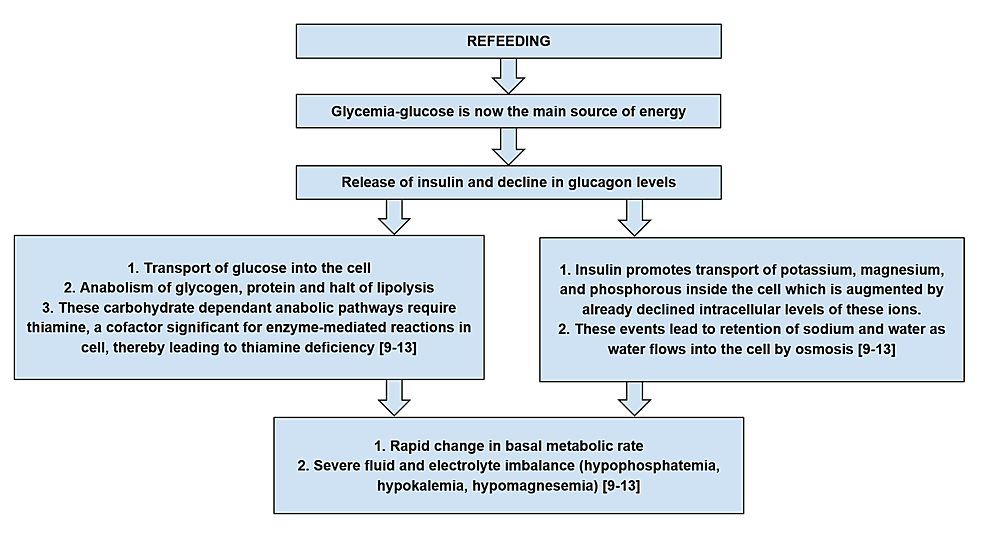 One of the pre requisites of developing RFS is chronic malnutrition. According to a study conducted by Hies et al. in 2005, nearly one-third to half of the patients admitted in the hospital are undernourished [14]. Table 1 provides the NICE guidelines for identifying patients at risk of acquiring RFS, which are a surgeon’s best ally [15].

Other predominant risk factors of RFS are listed in Table 2, indicating the association between RFS, comorbid conditions, and nutritional status [7,16-17].

The clinical spectra of RFS are reflective of disturbances in serum electrolyte and micronutrient levels affecting cell membrane potential and thereby impairing function in cardiac, nerve, and muscle cells. The severity of symptoms depends upon the extent of biochemical derangements and range from mild complaints of nausea and vomiting to life-threatening respiratory insufficiency and cardiac arrest. The clinical picture of RFS is highly unpredictable [4].

The clinical consequences of biochemical inadequacies in RFS are listed in Table 3 [18-19].

How could clinicians prevent RFS in hospitalized patients?

The fundamental tool to successfully manage RFS is to prevent it by preferably adopting a multidisciplinary approach [20]. There are five basic approaches to prevent the development of RFS in hospitalized patients consisting of the early recognition of patients at high-risk of acquiring RFS; meticulous clinical and biochemical monitoring following the institution of refeeding in individuals in high-risk groups [18]; designing appropriate feeding regimens as seen in Table 4; screening patients at risk of developing RFS at the time of hospital admission; and working with dieticians and nutritional team members to devise individualized refeeding strategies for each patient [21].

Refeeding protocols in patients at high risk of developing RFS

According to NICE, clinicians should commence refeeding at no greater than 50% of the energy needs in patients who have very little or no intake in the previous five days, and feeding rates should be tailored according to the patient’s clinical response [15]. In all high-risk groups, nutrients need to be repleted slowly at 0.042 MJ/kg/day and are increased to fulfill or exceed needs in the following four to seven days [15]. In severely malnourished patients (i.e., those with a body mass index less than 14 kg/m2 or a minimal intake for more than 14 days), it is advised to institute refeeding at 0.021 MJ/kg/day with rigorous cardiac monitoring [15] Concurrent prophylactic supplementation of vitamins, restoration of fluid balance, and correction of biochemical disturbances are also recommended. Table 4 demonstrates refeeding regimens [7,15,18,22].

*Strength of the recommendation (i.e., a and b) cannot be commented upon due to lack of randomised control trials conducted on RFS.

Management of electrolyte and micronutrient inadequacies in RFS

Given the potentially life-threatening outcomes of electrolyte abnormalities in RFS, it is essential to have a universally accepted regimen to correct such imbalances and identify inadequacies early, particularly in thiamine, phosphate, magnesium, potassium, and sodium levels to successfully manage RFS [17]. There is a lack of consensus on the best regimen to replete micronutrient and electrolyte deficiencies in RFS [18]. Following an extensive literature review, we have devised the protocols in Table 5 for the management of electrolyte imbalances in RFS [22,24-25].

Table 5: Management of electrolyte and micronutrient disturbances in refeeding syndrome

All trainee surgeons taking care of vulnerable patients who might need nutritional supplementation should be able to ascertain the risk of RFS. So far, there has been no randomized controlled trials conducted on this potentially life-threatening syndrome and this is mainly attributable to the ethical restrictions. Instead, treatment is based on observational data. These facts emphasize the significance of having sound knowledge of the careful re-institution of feeding in patients at high risk of developing RFS. Robust actions are needed to determine the incidence and arrive at a consensus on a set of guidelines for the management of RFS. Having profound knowledge of nutritional needs in critically ill, high-risk patients will help trainee surgeons prevent the onset of the illness spectrum of RFS. Prevention of RFS spectrum conditions would significantly contribute to reducing the morbidity and mortality of RFS. Following the review, we define RFS as "clinical spectra of fluid disturbances with either one or all of the biochemical abnormalities (i.e., hypophosphatemia, hypokalemia, hypomagnesemia and/or thiamine deficiency) resulting from metabolic changes precipitated by the rapid institution of enteral/parenteral feeding in chronically undernourished patients". However, robust studies should be conducted to formulate a universal definition of RFS, accurately ascertain the incidence of RFS, and devise optimal refeeding regimens via high-quality, randomized controlled clinical trials.

© Copyright 2018
Nasir et al. This is an open access article distributed under the terms of the Creative Commons Attribution License CC-BY 3.0., which permits unrestricted use, distribution, and reproduction in any medium, provided the original author and source are credited.

*Strength of the recommendation (i.e., a and b) cannot be commented upon due to lack of randomised control trials conducted on RFS.

Table 5: Management of electrolyte and micronutrient disturbances in refeeding syndrome